The history of kare-kare has many narratives and we look at three competing claims to its invention. 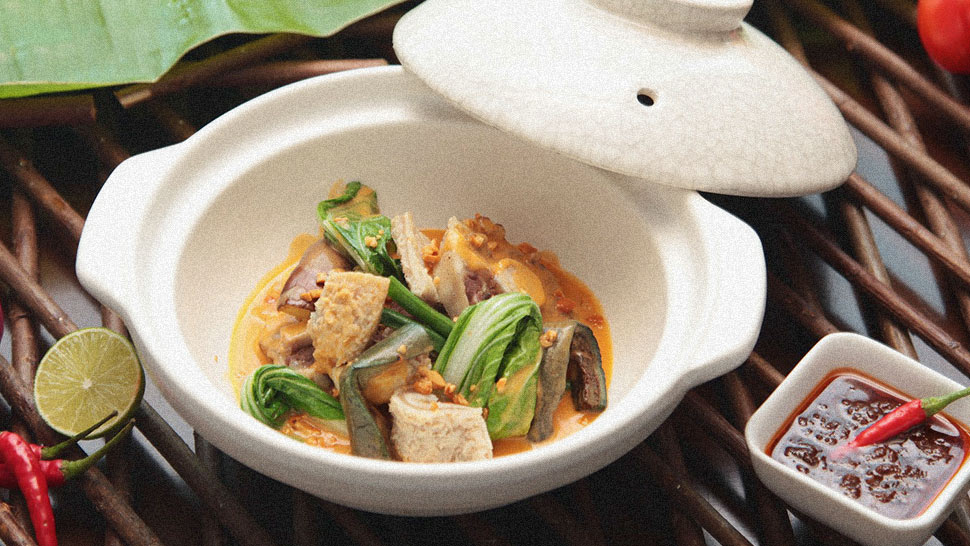 Kare- storied history as a Filipino food goes back hundreds of years, with at least three ethnic groups claiming they invented it. A very close inspection of its name led us to some fascinating discoveries: that kare-kare was a Kapampangan term that meant poor imitation of their version of (curry), that its name was the basis of the word , and that meant sauce in other Asian languages.

Kare-kare has been with the Filipinos for hundreds of years. The kare-kare of today is and tripe immersed in an achiote-tinted, peanut-flavored gravy, served with blanched vegetables on a separate platter, and shrimp paste served on the side. Its hearty reputation has led it to become the star of town fiestas, family potlucks, and Mama Sita commercial ads. Kare-kare evokes culinary elegance, tradition, and home. But what is the story behind the dish? We look at the three competing claims to its invention.

The History of Kare-kare, According to the Kapampangans

The general consensus of Pampanga natives is that kare-kare originated in Pampanga, considering Kapampangan people often have a reputation for cooking to their hearts’ content and coming up with deliciously rich fare.

As Claude Tayag puts it: “If you give [a Kapampangan] a recipe with one tablespoon of butter, he will add more to it.” With a dish as hearty as kare-kare, it is likely to fit in perfectly with their cuisine. The old-timer Kapampangan, however, would disagree. His kare-kare is different from the kare-kare we know today.

Our elder friends from Pampanga—those who are still around but have lived long enough to tell the tale—say once upon a time, there was a dish their mothers used to prepare known as . Initially developed by the Moro of Indonesian descent and then fine-tuned by their Kapampangan ancestors, it was at most a mudfish stew with a blend of ginger, turmeric, , key lime peel, and safflower.

In terms of its composition, the Kampampangans' was more similar to Sri Lankan fish curry or Thai fish curry than the actual kare-kare we know today.

More than being similar to the kare-kare we know today, the Kapampangans’ actually bore more similarity with several Southeast Asian dishes also named , which in the Tamil Indian language means sauce, and which the English-speaking world has popularly anglicized as curry. (This makes us doubt the claim the kare-kare we know today was invented in .) Peanuts, a then-recent discovery from Brazil, rounded out the flavor profile once it was introduced to the Asian continent through Portuguese explorers.

The History of Kare-kare, According to the Tagalogs

The Kapampangans of long ago took great pride in their , allegedly setting up thatched huts on the roadside to serve the delicacy. These huts were referred to as , from which the comes. As more Kapampangans ventured to Manila for business or studies, the followed them there, catering to a homesick clientele. Tagalog folk from across the Pasig wanted to get in on the action and established their own  enterprises.

Whether it was due to of certain ingredients or because cooking  was their era’s version of a trade secret, the Tagalogs struggled to replicate it. The delicate yellow of safflower was replaced with the aggressive cinnabar from achiote seeds, while the other spices crucial to the cooking process were left out.

Consequently, lost its Kapampangan essence and ceased to be the  the Kapampangans recognized. Such attempts were frowned upon and ridiculed by the Kapampangans. They dubbed it as -, meaning, it’s like but it’s not kari—a poor imitation.

From this perspective then, kare-kare is not of Kapampangan origin—but Tagalog. There is, however, another side to the narrative.

The History of Kare-kare, According to the Indians

On September 24, 1762, a fleet of 15 British ships laid siege on Manila. Aboard the British ships were Sepoys—Indian riflemen under Queen Victoria’s service. Their arrival triggered the Battle of Manila. Sepoy soldiers assisted their masters in combatting the Spanish army and emerged .

The Philippines at this point was already a colony of the Spanish government. The British saw potential in Manila and planned to use it as their flagship trading post in Southeast Asia. The British held on to Manila and Cavite for 20 months. When they left, a good number of their Indian subordinates decided to stay behind. The Indians found a new home east of Manila, in the town of Cainta, where they married the local women there.

Though the Sepoy expatriates adjusted to life in the archipelago, they would miss the cooking of their homeland. Such was their yearning that they would prepare close-to-authentic with the spices they had on hand. When their supply of spices from the British ships that brought them to Manila finally ran out, they learned to be resourceful and improvised. The reliance on achiote and peanuts made up for the absence of color and flavor brought on by spices. With the addition of bagoong (a shrimp paste that is a specialty of Malabon), a new dish was born.

The lamb and mutton which these Sepoys were so accustomed to were replaced by goat and carabao, the head and hooves of the latter being particular choice cuts for kaari. Though cattle has steadily been available in the country since its introduction from Mexico during the galleon trades in 1586, it would take a while for its inclusion to occur as the Sepoy avoided it for religious reasons.

By the 1910s, recipes for kare-kare have already employed ox-tail. The switch from carabao to cattle was a logical choice. Through the Americans' refinement of mass livestock production, cattle became much more accessible to the general public.

These Sepoys peddled their new brand of along the banks of the Pasig River in thatched huts, which functioned as eateries as well as convenience stores. Their customers were often Tagalog travelers who hailed from towns along Laguna Lake en route to Manila. For these travelers, the Sepoys’ thatched huts indicated they were already near. The Tagalogs referred to these establishments as .

So Which is the Real Origin of Today’s Kare-kare?

With these three accounts, the origin of kare-kare may come across as conflicting. Which one is telling the truth? It is possible that all of these happened simultaneously.

It is possible that the Kapampangans’ kariyan did go toe-to-toe with the Sepoys’ karihan. And with their proud nature, it was only natural to deem anything outside their standard as inferior—even if, ironically, the dish spun off from their rivals’ homeland.

Although there is historical evidence of being prepared in Tawi-Tawi and Pampanga, it is possible that people from these regions made their own indigenous take on the Asian much earlier than the Sepoys. They inherited a practice set by their Moro ancestors, who in turn, were influenced by the pervasive Indian presence all over Southeast Asia. Years of adaptation to the surroundings could have affected its deviation from the original Indian dish.

It is also possible the Sepoys were the Tagalogs mistaken by the since they dwelled and sold their meals by the Pasig River. The word Tagalog is derived from the term - which people who lived by the river.

It is possible the Kapampangans’ did go toe-to-toe with the Sepoys’ . And with their proud nature, it was only natural to deem anything outside their standard as inferior—even if, ironically, the dish spun off from their rivals’ homeland. Whichever the case, it seems that the Tagalog or Sepoy variation of kare-kare won out. The simple combination of annatto, peanuts, and bagoong was perhaps enough to please the Filipino consensus, surpassing the supposed original in terms of popularity.

Today you can visit Cainta and still sample authentic kare-kare, as prepared by the Sepoy community. If you look at cookbooks covering local or even browse through Google, chances are you will find more writings about kare-kare and a scant blip on .

Back in Pampanga, ask the kids about , and they might assume you mean kare-kare. At the rate this is going, the story of kare-kare will continue to live on, while the kari—if not told to the next generation, might remain but a distant memory in the minds of a past generation fading from view.

But if is anything important, then we must conclude that the kare-kare we know today, is in fact, a Tagalog invention born out of curiosity, resourcefulness, and their passion for food.

The Gentleman’s Guide to Being a Feminist

Before Domination: The History of Jollibee in the Philippines
All Photos
Comments
View As List