The business of fashion is dominated by men.

Bernard Arnault of LVMH has been crowned the richest man in fashion.

While he has been a regular name on Forbes' annual list of billionaires, this is the first time he has taken the top slot.

After overtaking Zara's Amancio Ortega on the list this year, Arnault is now certified fashion royalty with a net worth of $72 billion in 2018.

Surprisingly, the big names that women have come to worship as sartorial goddesses are not on the list.

Instead, behind the world's biggest brands are businessmen who have come to understand the minds of consumers through years and have endured years of trial and error (although for a lucky few, it comes as an inheritance). Here are the world's wealthiest in fashion, based on their 2018 net worth listed by Forbes: 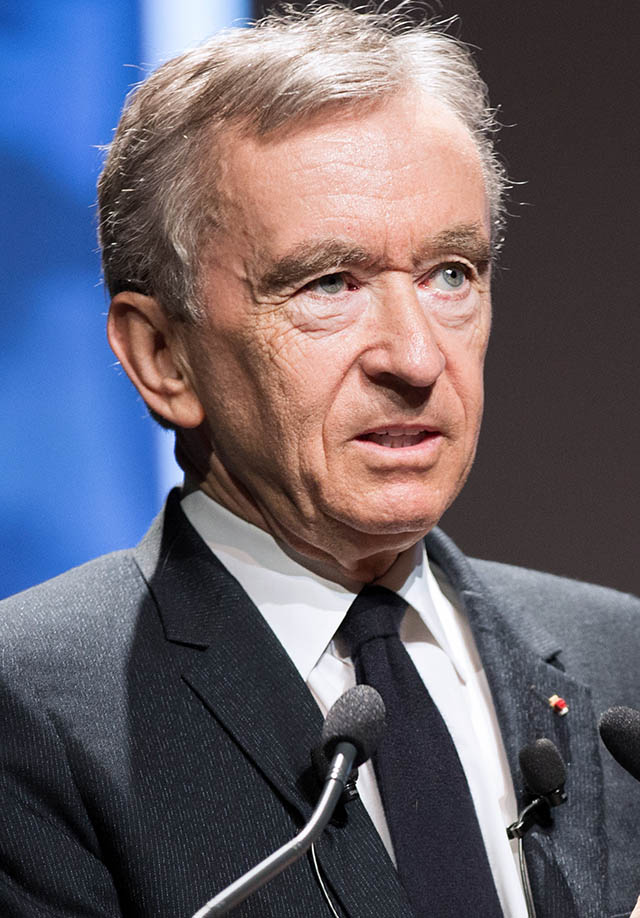 Holding the top spot, Arnault has been the CEO of the world’s largest luxury retailer, LVMH Moët Hennesy Louis Vuitton, since 1989. He’s not only the richest man in fashion, but is also among the big-league billionaires today, trailing just behind Warren Buffet, Bill Gates, and Jeff Bezos on Forbes' annual list of the world's wealthiest. His net worth also establishes him as the world’s richest European.

The 69-year-old and the luxury conglomerate that he runs recently purchased Christian Dior. Aside from managing beloved fashion brands such as Louis Vuitton, Fendi, Céline, Givenchy, and Marc Jacobs, LVMH also holds a large stake in beauty, , and watches. This includes Sephora, Tag Heuer, and Bulgari.

In the first quarter of 2017, Amancio Ortega was the world’s second richest man and said to be one of eight billionaires who owns half the globe’s wealth. Having fallen behind Arnault in the past year, Ortega still enjoys a cool $70B in his bank account. He owes the  of his wealth to the 59 percent of shares he has on Inditex. Despite his billions, Ortega remains humble. He began making bathrobes and lingerie with his deceased first wife Rosalia Mera, who later began stitching some of their first clothes. He continues to remain out of the spotlight.

After success followed the opening of Zara and the incorporation of Inditex, Ortega made weighty purchases in the early '90s, acquiring Massimo Dutti and Stradivarius after starting Pull&Bear and Bershka.

Hailing from France, Pinault founded the Kering luxury group in 1963, which initially traded building materials. Pinault shifted gears when Kering purchased a controlling share in the Gucci Group in 1999, and proceeded to acquire brands such as Saint Laurent, Alexander McQueen, and Stella McCartney.

Also an avid art collector, Pinault owns over 3,000 works in his collection and plans to open a museum in France.

Pinault is married to actress Salma Hayek, and the pair is among the richest couples in the United Kingdom.

Phil Knight founded and ran the Nike company for 52 years before retiring in 2016. Knight was responsible for signing Michael Jordan with a $500,000 a year contract and eventually launching Air Jordan. When sales plummeted, Knight was the one who led the company’s branding focus to appeal to the everyday customer instead of just trained athletes.

You may not have heard of Luxottica but you probably own a pair or two of its eyewear. The brand made it big through the production of glasses for brands such as Armani, Chanel, and Bulgari. Founded by Del Vecchio in 1961, Luxottica also handles Ray-Ban, Oakley, Sunglass Hut, and LensCrafters.

Interesting tidbits about Del Vecchio: He was put in an orphanage at the age of seven. Before heading to a design school, he learned his craft at a car and eyewear parts factory when he was 14.

Yanai’s Fast Retailing is best known as the parent company of Japanese retailer Uniqlo, but Fast also owns J Brand, Theory, and Helmut Lang. Yanai has big plans for the clothing chain that was bequeathed to him by his father in 1984. Candidly, he has admitted that he is reaching for a 70 percent increase in revenue by 2021, and wishes to surpass the likes of Inditex and H&M.

After Inditex, H&M is the world’s second-largest fashion retailer. Stefan Persson inherited the company from his father, Erling, and Stefan saw it grow from a simple store named “Hennes” into the retail giant that it is today. Persson is currently the richest man in Sweden, owning about 40 percent of shares in H&M and investing in various real estate properties.

Alain Wertheimer and Gerard Wertheimer
Net Worth: $13B
Company: Chanel

When we think of Chanel, Coco Chanel initially comes to mind. If not, Karl Lagerfeld is a close second. But behind the luxury brand are brothers Alain and Gerard Wertheimer, who inherited the designer label from their grandfather, Pierre Wertheimer. The late Pierre co-founded the company with Coco Chanel and bought her out early on. Extremely private, the brothers tapped Lagerfeld to be the face of the company in 1983, even as the Wertheimer brothers continue to head the company they've run for over 30 years.

Another third-generation businessman, Heinrich was born an heir to the Deichmann shoe business, which his grandfather started in 1913. When Heinrich, who was named after his grandfather, took over the business in 1999, the company had already gained a loyal following. The Germany-based shoe producer later became Europe’s leading shoe retailer.

Giorgio Armani is one of the two fashion icons on this list who has made a brand of himself. Armani was originally studying to become a doctor. After leaving medical school, serving time in the military, and working as a buyer and window dresser, Armani began his career as a designer for Nino Cerruti. In the 1970s, he started his own clothing line and has amassed massive success since then. Apart from the various Armani fashion lines, the luxury brand has also expanded into the lifestyle realm, with hotels, home lines, and restaurants put up under his name.

While Povlsen is less known on this side of the world, he’s listed as one of the richest men in Denmark. He inherited his parents’ small business at the age of 28 and expanded it to become a company now called Bestseller. Under this parent company, Jack & Jones, Only, Vero Moda, and eight other brands have flourished. He’s also on the board of online clothing site Zalando and owns shares in retailer Asos. That’s only a percentage of Povlsen’s revenue. In 2016, Business Insider reported that the billionaire went on a decade-long shopping spree and owns at least one percent of the Scottish Highlands now.

After her mother died, Sandra Ortega Mera inherited seven percent of Inditex, which her parents co-founded. She now holds a 4.5 percent stake in the  but does not play a part in its management. In 2017, Ortega Mera was listed as Spain’s second richest person after her father, Amancio. She spends most of her time at the foundation that her mother established to train persons with disabilities.

American designer Ralph Lauren launched his career as a tie-maker in after he worked for Brooks Brothers. He called his line Polo and experienced a sell-out after Neiman Marcus put in a bulk order for 1,200 ties. He was also distributed at Bloomingdale’s at the time. After developing his menswear line, Ralph Lauren (originally Ralph Lifshitz) was recognized by the Coty Awards. In 1972, he came up with a line of 24 shirts showcasing the polo player logo that would go on to serve as the brand’s logo. He stepped down as CEO of the company in 2015, but still serves as executive chairman and chief creative officer.

In 1963, Les Wexner founded The Limited, a business now known as L Brands. The company distributes Bath & Body Works, Henri Bendel, and La Senza, but what perhaps is Wexner’s biggest accomplishment was saving a six-store Victoria’s Secret from bankruptcy in 1982 and marketing it as a lingerie brand for the masses. Despite the power he holds on women’s intimates brands, Wexner is more interested in the business than in attending runway shows. Financial Times has even called him the “anti-Hugh Hefner.”

10 Powerful Tycoons from Cebu
All Photos
Comments
View As List