SM group founder Henry Sy Sr. had a net worth of $20 billion as of February 2018, according to business magazine Forbes’ latest listing of the world’s dollar billionaires. That not only extended his title as the richest man in the Philippines, but also made him the wealthiest tycoon in Southeast Asia.

Sy’s all-time-high net worth put him above many prominent business owners around the world such as Tesla CEO Elon Musk, Uniqlo founder Tadashi Yanai and Samsung Electronics chairman Lee Kun-Hee. His $20-billion fortune also marked a large 57-percent jump from his net worth of $12.7 billion reported in the previous billionaires’ list.

But what makes up the 93-year-old tycoon’s massive fortune? Unfortunately, Forbes magazine does not provide a detailed breakdown of the wealth of the billionaires on its list.

Still, we can try to get a sense of the sources of Sy’s wealth by taking a close look at the market value of the listed companies largely owned or controlled by Sy and members of his immediate family both directly or through holding companies.

The diversity of his interests shows that while Sy is best known as the founder of the SM Malls, the source of his wealth extends beyond his 74 malls in the Philippines and China.

The infographic above summarizes our findings on the value of the Sy family’s direct and indirect holdings in the seven listed companies based on the companies’ disclosures to the Philippine Stock Exchange (PSE). 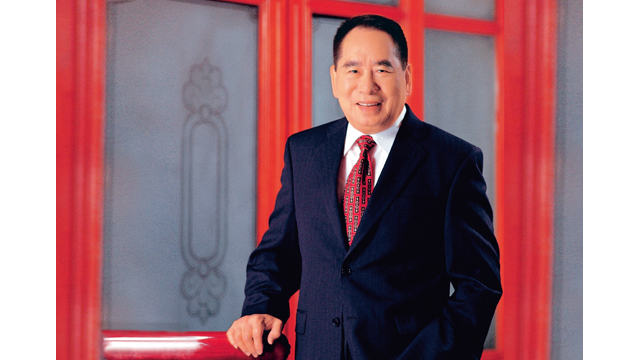 A bulk of Sy’s wealth comes from his family’s combined 55.7-percent stake in SMIC, which is the country’s largest company by market capitalization as of February 9, Forbes’ cut-off date for its wealth estimates. SMIC, which includes the SM group’s retail business, reported revenues of Php297.4 billion in 2017, up seven percent from the year before.

However, the Sy family also holds both direct and indirect equity stakes through other holding companies in at least three of these listed companies, namely, SMPH, BDO Unibank and China Bank. The value of these stakes held outside of SMIC are accounted for separately in the infographic.

The Sy family also has indirect equity stakes in a seventh listed firm, gaming company Belle Corp., the co-licensee of City of Dreams Manila, an integrated resort and casino in Entertainment City. These stakes are held via various holding companies as well as through an operating company, SM Development Corp. The value of these stakes held outside SMIC are also accounted for separately in the infographic.

Using stock prices and exchange rates as of February 9, Entrepreneur Philippines calculated Sy and his family’s wealth from their direct and indirect stakes in the said listed companies at around $18.2 billion. This figure covers only listed firms, which may explain the discrepancy with Forbes’ $20-billion estimate that may include stakes in non-listed firms and other assets. 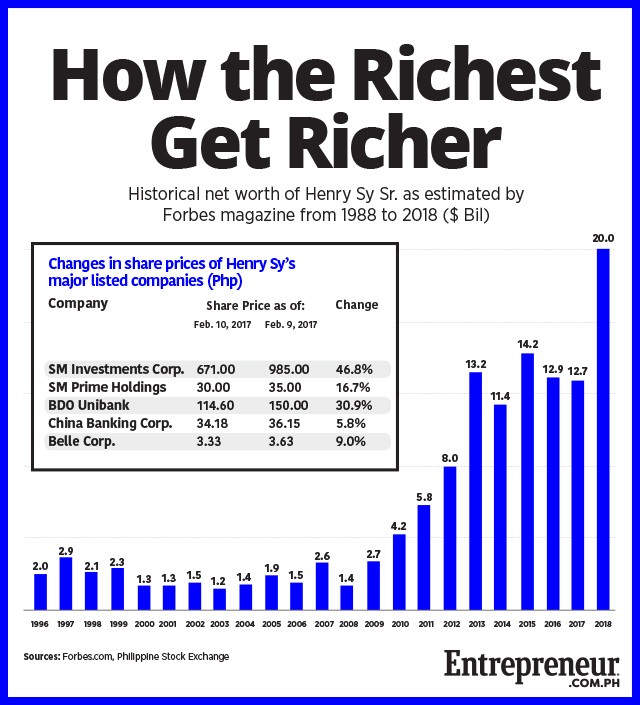 If listed companies account for a bulk of the Sy family’s $20-billion fortune, they also explain its remarkable growth from $12.7 billion a year ago.

And it doesn’t seem like Sy’s wealth will stop growing anytime soon. Earlier this month, various media agencies reported that one of his private companies, Philippine Global Communications, is mulling over bidding for the third telco franchise. As well, Sy is partnering with fellow businessman Wilson Tieng to form a consortium proposing to build a brand new airport in Sangley, Cavite worth $12 billion. 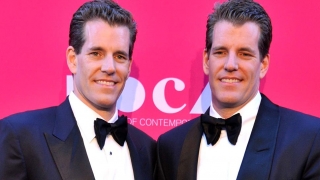