A look back at his interview with Esquire Philippines from May 2015.

With the release of the latest Forbes list of the wealthiest people in the Philippines, Manuel "Manny" Villar, Jr. now finds himself rising to the #2 spot—after tripling his net worth to US$5 billion, from $1.65 billion in 2017.

Entrepreneur, real estate tycoon, congressman, Speaker of the House of Representatives, senator, presidential candidate: Manuel Villar, Jr. has led a rich life—in more ways than one. We look back at this interview Villar did with Esquire Philippines in May 2015.

ESQUIRE PHILIPPINES: Have you always been an entrepreneur? Considering your widely known personal history as someone who made it from meager beginnings, you must have gotten some training as an employee somewhere.

MANNY VILLAR: I've always been an entrepreneur. I took the BAA course (Business Administration and Accountancy) in UP. Sabi ko sa sarili ko, 'dito na ako sa mas mahirap!" But even during my early days, I was delivering fish to restaurants.

ESQ: That was after a short stint in SGV, after which you quickly became a small-business owner. Part of the myth of entrepreneurial success is that it's hardly ever a smooth start. Was it any different for you?

MV: I experienced difficulties at the start, I wasn't getting paid right away, and nung hindi nila mabayaran, I asked for vouchers na lang. 'Yun naman ang binenta ko at a discount. So I needed to be creative.

ESQ: What about the real estate development business? When did you get started in that?

MV: I started with a small company called “MGS”—Metro Gravel and Sand. I had bought two delivery trucks and I’d be making my usual deliveries and would see all these houses, and I would think “teka, kaya ko rin ‘yan.” ‘Pag entrepreneur ka kasi, nangangarap ka parati. I also noticed that houses were being sold at prices that were out of reach for many Filipinos. I decided to build houses and lots and sell them. 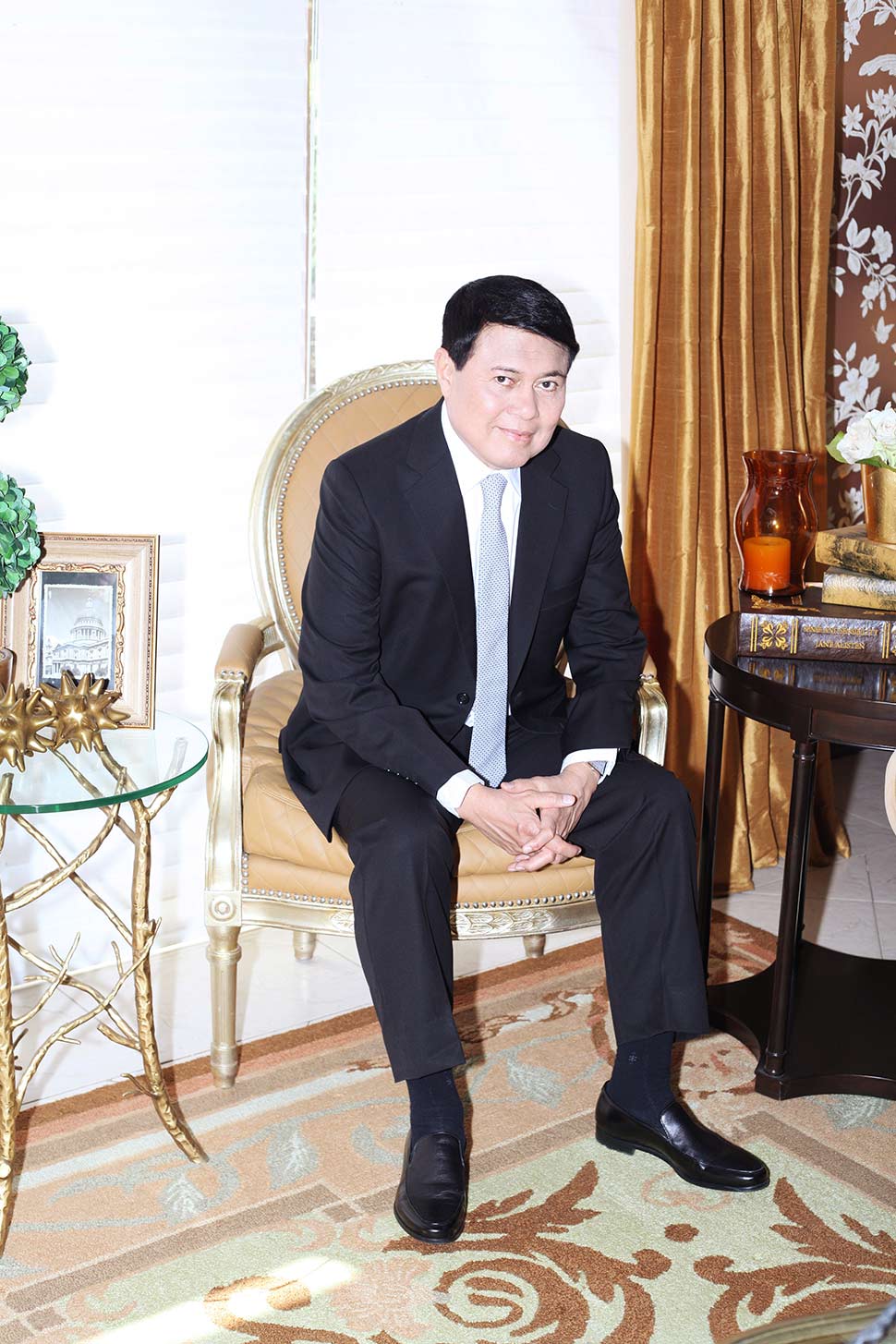 MV: Sabi ko sa sarili ko, “What if I made a house costing 60,000 pesos only? On top of that I offered it to buyers at a P5,000 downpayment. Kasi for many people the problem is not the cost of the house, but the downpayment. This was in BF Homes pa.

ESQ: BAA is a tough course—it includes a public accountancy component. Was it your CPA that made you great at making those complicated calculations on how to work out the financial side of that great proposition toward your customers?

MV: I’ve found that I can simplify complex things. That’s the way business works a lot of times. I was a CPA but I never had to use it when I thought about how to work out financing schemes. Arithmetic lang ‘yan. In a very large way, there’s no need to do heavy thinking!

ESQ: But heavy thinking is all we’ve got! Seriously, though—Forbes magazine reports your net worth today [in 2015] at about 1.74 billion dollars, ranking you among the 15 wealthiest persons in the Philippines. That also makes you a very rare kind of success: a dollar billionaire and—as many have pointed out—the only person of Filipino descent on the country’s Forbes list. You’ve made that entire trip from small business owner to Forbes-level tycoon—all within one lifetime.

MV: At that time, everyone was making money. This was in 1975 or ’76. The real estate market was booming. I’ve always held that “everybody is a genius” when there is a boom. Siyempre, it’s easy to make money.

ESQ: But somehow, that makes it all sound too easy. The real estate industry has gone through a number of shaky turns since 1975.

MV: When there is a downturn, that’s when the tough remain. In a way, it was good that I started with simple beginnings. Because when you have nothing, you have nothing to lose. When I was starting, I would keep saying to myself, “it doesn’t bother me that I’m small.”

"When there is a downturn, that’s when the tough remain."

ESQ: By your own admission, you went through some tough times during the Asian financial crisis in ’97 and ’98. You weren’t that small anymore, as I recall. And I’m sure the amount of money you lost wasn’t that small, either.

MV: Well, the truth is, in the end, you don’t really lose anything—you only lose zeroes.

ESQ: That must have been quite a lot of zeroes. The Asian financial crisis was no simple market dip—especially for your industry. In fact, the dot com speculative bubble, the housing bubble, and the subprime mortgage crisis have all been seen as effects of that crisis.

MV: It was what it was. 1998 was a big failure. But not getting paid by my customers—when I was starting out—was bigger. Whenever I was down in business, I would tell myself “kailangan kong makabawi!”

ESQ: Mukhang bawi-bawi nga naman, from the looks of it.

MV: I’m not a quitter—totoo ‘yung linyang “sipag at tiyaga.” Even though it seems like it, it’s not a marketing line.

ESQ: Speaking of “sipag at tiyaga,” did you bounce back easily from your effort in running for the presidency in 2010?

MV: On the very same day PNoy won, I went back to the office and met with my managers. I wanted to go back to business again. I told them, “I’m back!”

ESQ: Yes, you have mentioned many times that you see your return to the business sector in 2010 as a comeback of sorts. The ability to bounce back is really an underrated quality.

MV: It’s part of being an entrepreneur. ‘Pag entrepreneur ka, you need to bounce back quickly. 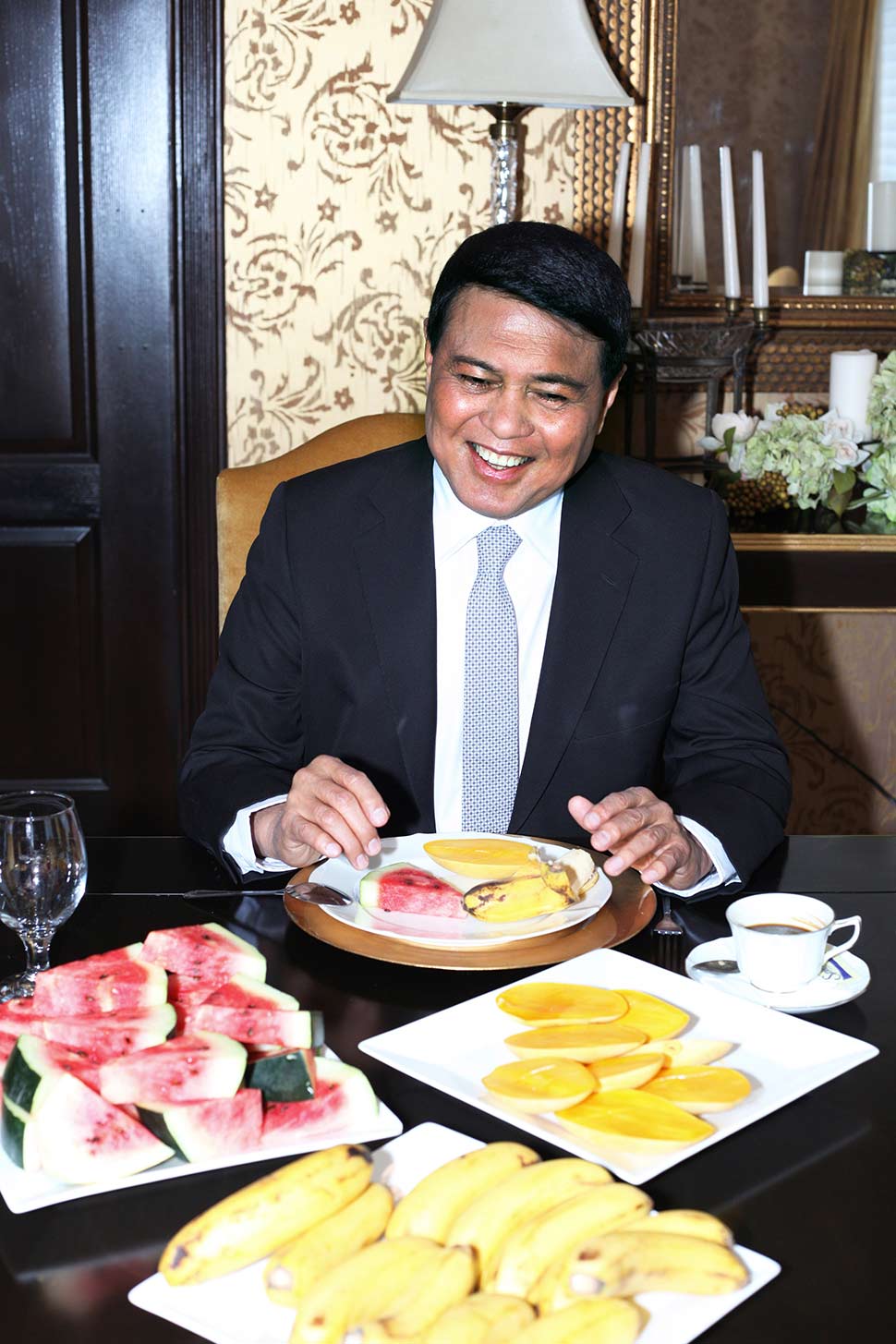 ESQ: Yes. I think every entrepreneur knows that. But what about Pinoys who aren’t entrepreneurs?

MV: When I started selling real estate, my first buyer was an OFW. ‘Yun ang pangarap nila, magkabahay. To date, I’ve sold more than 300,000 homes and 50 percent of our offerings are bought by the OFW market.

MV: At the risk of my own business, I see the day when the OFW will finally come home.

ESQ: That’s a very optimistic view, and also an ambitious one.

MV: I mean, this has to come to an end at a certain point. A lot of families are suffering because one—or both—of the parents are away. The social cost of the OFW segment is high.

ESQ: Of course, it’s hard to deny the financial advantages of working abroad, not only to the upkeep of the family, but to the economy at large. You’ve already mentioned the tens of billions they contribute year after year. And it seems to be growing larger. But there is also what seems to be a widening gap between the rich and the poor.

MV: Yes, I think the gap is widening. For those below the gap, there’s no real wealth creation. Just a higher cost of living—their lifestyle goes up, they pay for more things.

ESQ: And higher levels of employment is not enough to bridge that gap?

MV: I think we could have grown faster if our citizens had been entrepreneurs. The bulk of the population is working—they’re not entrepreneurial. I’m of the firm belief that poverty can only be reduced through business. Wealth creation is the way forward. We’re not entrepreneurial enough. I think this is the reason for the gap.

ESQ: There’s got to be a bright side, though. Something Filipinos—even those who aren’t entrepreneurs—can hold on to.

MV: Right now, the country is on a winning streak. We’ve got strong fundamentals. The economy has got good legs. Besides OFW remittances, there’s tourism. We’re looking at a possible 10 million visitors over the next five years.

ESQ: So it’s a good time to do business?

MV: It’s a good time to do business!

ESQ: There are a lot of risks, too. And some people aren’t so optimistic.

MV: But when you’re an entrepreneur, your definition of risk is lower than the others.

MV: I don’t gamble—business is already gambling. I also hold the assumption that there is no such thing as luck.

ESQ: So what do you have instead of luck?

MV: Besides “sipag at tiyaga,” I have a routine. I wake up early, go to the gym. By six a.m. I’m at the office already. I meet my managers at Starbucks. The baristas are all cheery in the morning and they know my name. I notice now that thanks to the BPO industry, the places are not empty or lonely anymore at six a.m. For many people it’s happy hour!

MV: It’s a good thing that the BPO industry is here—and it’s growing.

ESQ: So it’s not just the OFW segment we’re dependent on. One sign of a growing economy is also a very competitive business climate.

MV: You get competitive, too.

ESQ: That’s understandable. We imagine that having also spent more than fteen years in government—having been Congressman in 1992 and later on Speaker of the House of Representatives and then Senate President—comes with its frustrations.

MV: Hindi ako madaling magalit, eh. ‘Yung nasa gobyerno ako, maraming nagagalit sa akin. Galit na galit. When I come in, I would just say “hello” to them. I would look at them calmly. Why would I waste my time on them by getting angry?

ESQ: You also don’t seem to waste your time on luxuries.

ESQ: What’s another thing you can teach us?

MV: Growth is meaningless. In the end, we all die. The winner of the rat race...is a rat.

ESQ: That does bring a certain level of Zen wisdom to your business thinking! Do you have any other parting advice for us average entrepreneurs?

MV: The same rule applies: “everybody is a genius” when there is a boom! Look around you, there are so many opportunities!

This article originally appeared in the May 2015 issue of Esquire Philippines. Minor edits have been made by Esquiremag.ph editors.