Here's an updated list of cancelled or postponed events in the Philippines. 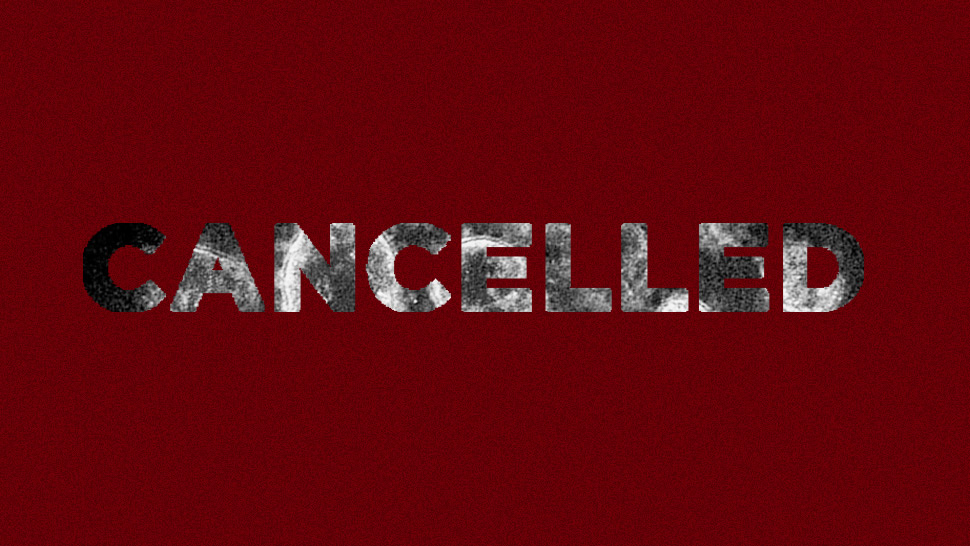 The number of COVID-19 cases in the Philippines is fast rising, and it has caused the cancellation or postponement of a number of events in the country.

So far, the following events in the Philippines have been cancelled or postponed.

The Philippine Basketball Association has decided to shelve its games for a week as a precaution to the virus threat. The decision was made by the entire PBA board in consultation with Commissioner Willie Marcial in an emergency meeting on March 10.

The Civil Service Commission has cancelled the professional and sub-professional Career Service Examination scheduled on March 15.

The Manila Auto Show is postponed until further notice. 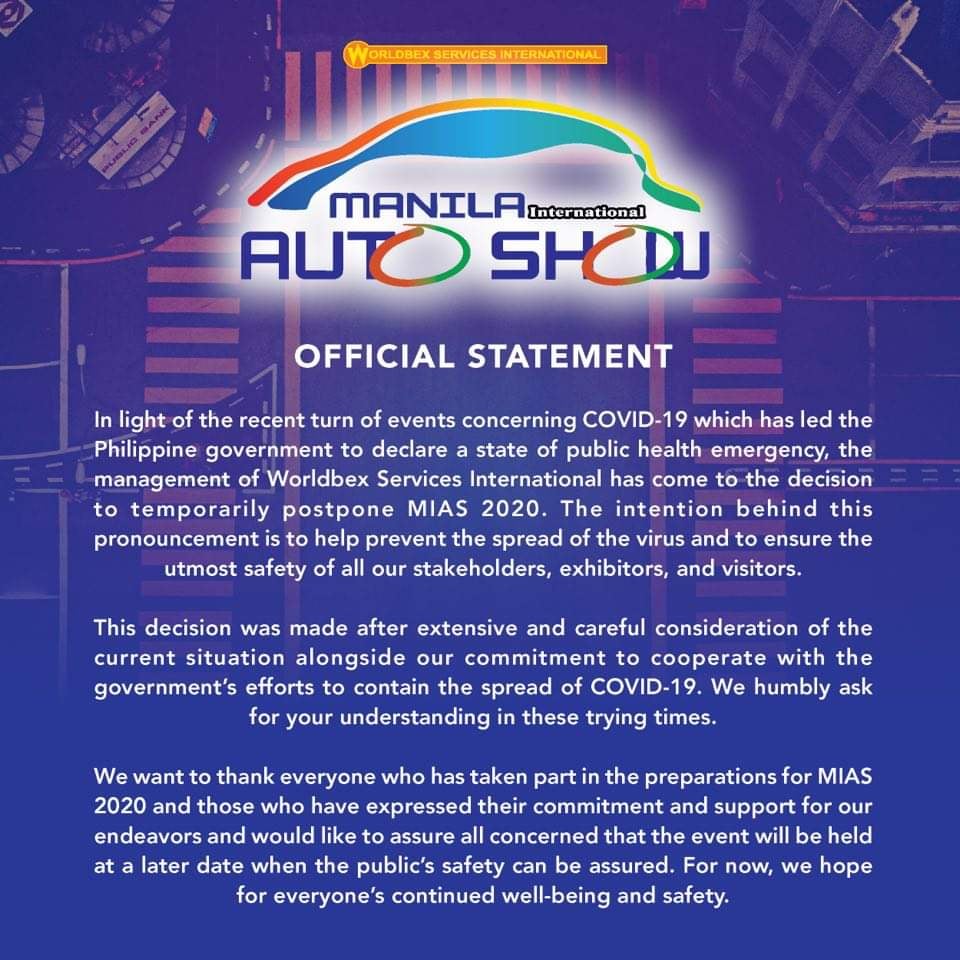 Baguio City Mayor Benjamin Magalong decided to cancel the popular festival upon the recommendation of the city’s inter-agency task force on COVID-19. The festival, including its grand street parade of flower floats, was originally set on February 1, had been earlier moved to March 21, but is now cancelled.

Baguio’s ukay-ukay market was also closed to prevent the spread of the virus.

The 25th Philippine World Building and Construction Exposition is the biggest construction expo in the country. Organizers postponed it until further notice. 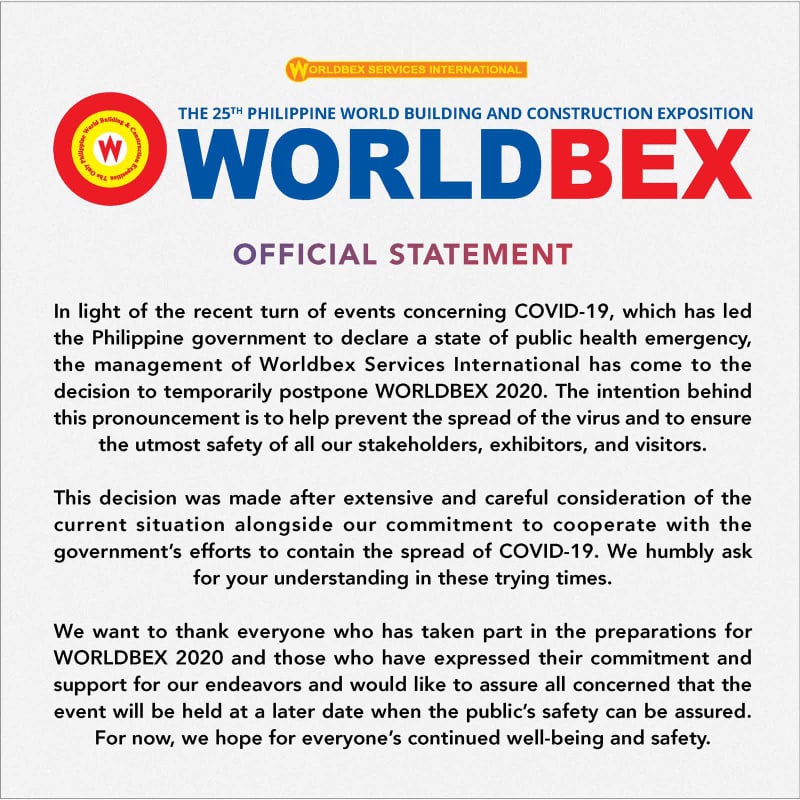 Marikina City was supposed to host the annual sports meet for elementary and high school students in May this year. The Department of Education has postponed it until further notice.

The University Athletics Association of the Philippines (UAAP) board has decided to postpone all UAAP Season 82 events until March 17.

Organizers of the PIFS announced the postponement of the exhibit after President Duterte declared a state of public health emergency nationwide. The PIFS was scheduled on March 12 to 14.

Daang Dokyu is the largest documentary film festival to be organized in the country. The organizers decided to postpone the events which were initially scheduled for March 16 to 21.

POSTPONED: Art in the Park

Organizers of Art in the Park have decided to postpone the March 15 schedule of the popular art fair which was scheduled on March 15. 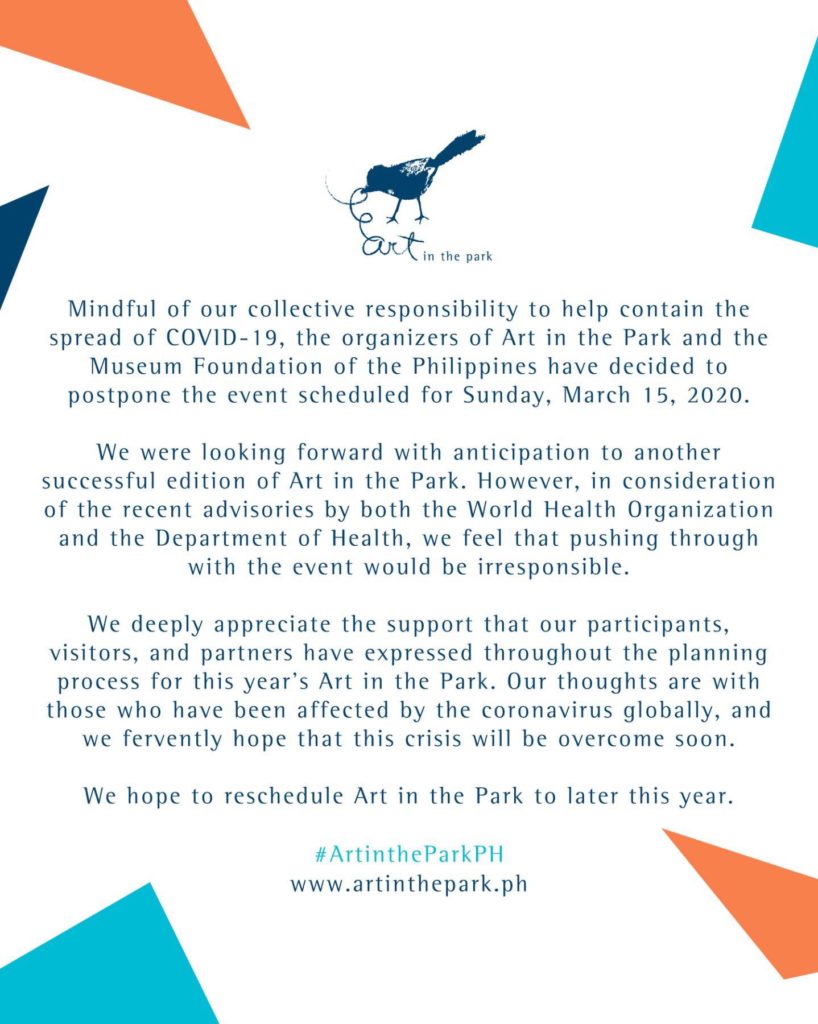 Popular ’90s boy band 98 Degrees has postponed concerts in Davao, Manila, and Cebu and pushed these back to May 16, 21, and 23 respectively.

Please be advised that the 98 Degrees show had been postponed.

All purchased tickets will be accepted on the rescheduled dates at their respective venues. For more info contact SM Tickets. pic.twitter.com/qJxFGBkMnq

Runners! Please carefully read this special announcement from our friends in Running Man.

Thank you for your understanding and continued support.

Till we meet each other again ~ pic.twitter.com/X8pqWCU0nq

Avril Lavigne was scheduled to perform in Manila on May 20, but the singer cancelled the concert citing the COVID-19 outbreak.

The band has postponed its scheduled Asian tour slated for March, which would have taken it to Manila, Bangkok, Taipei, Hong Kong, Seoul, Osaka, and Tokyo.

“We have unfortunately made the difficult decision to postpone our upcoming shows in Asia due to the health + travel concerns with coronavirus. We know it sucks, as we were looking forward to seeing you all, but hold on to your tickets we’ll be announcing the new dates very soon,” said the band in a statement on Facebook.

Midas Promotions announced the postponement of Khalid’s Asian tour, and has provided steps on how to refund tickets.

Organizers of the Lubao International Balloon and Music Festival in Pampanga have cancelled the event due to health and safety concerns amid the COVID-19 outbreak.

Governor Jose Maria Zubiri of Bukidnon has declared the cancellation of Malaybalay City’s famous Kaamulan Festival, which was slated from March 23 to April 23.

The Magayon Festival is held every April in honor of the beauty of Mayon Volcano. Albay Governor Al Francis Bichara announced the cancellation in February.

This is a developing story and will be regularly updated as more information becomes available. 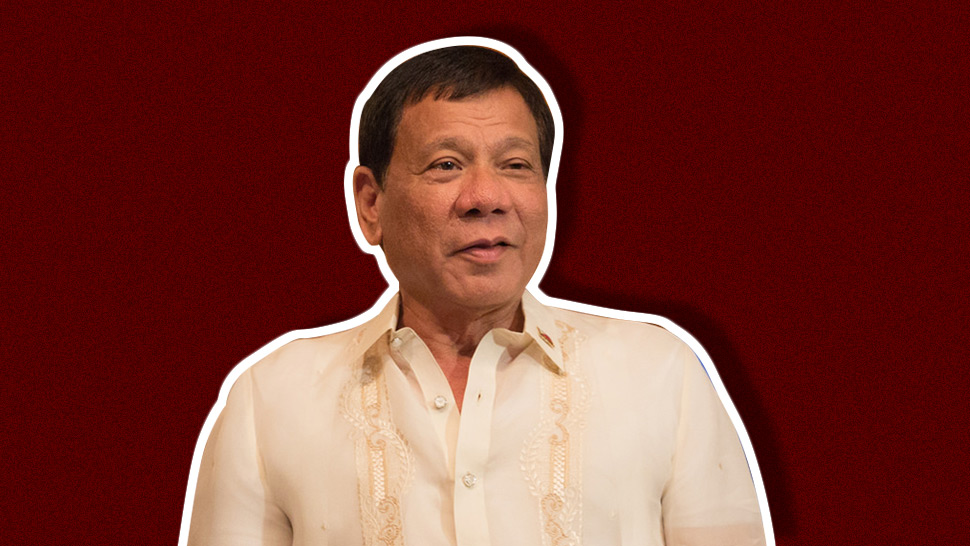 Metro Manila Should Be On Lockdown, Lawmaker Proposes Amid COVID-19 Fears
All Photos
Comments
View As List