Kris Aquino vs. Mocha Uson is the Celebrity Deathmatch we'd been waiting for.

Last night, she was a heavyweight pugilist with a Gucci bangle on her wrist. Kris Aquino, in classic Kris Aquino fashion, faced her phone cameras in a hotel room to broadcast a message to PCOO Assistant Secretary Mocha Uson. What ensued might be best described as the first blood of a smackdown with the potential to rival the entire Pacific Rim franchise. 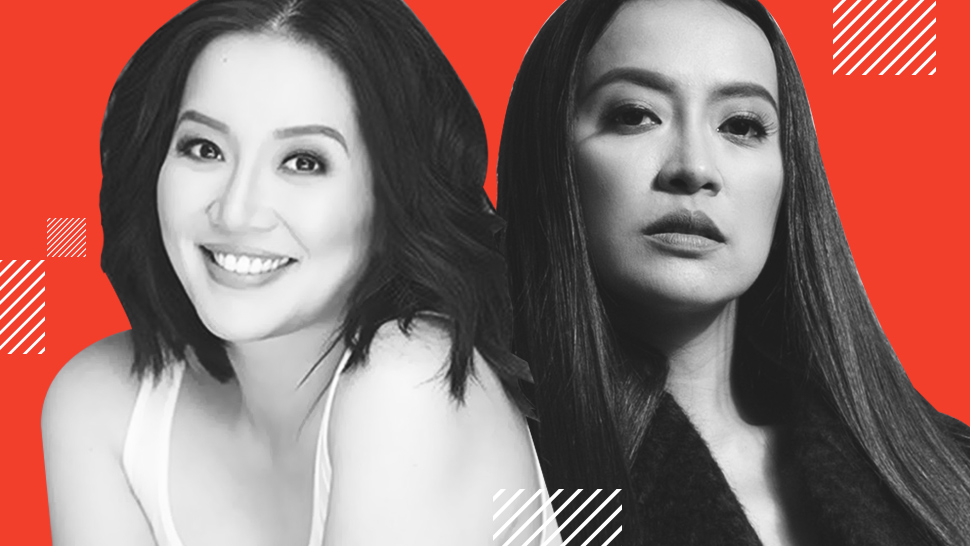 The always-controversial Asec had previously posted on Facebook a derogatory video that compared President Rodrigo Duterte's SoKor Kiss to a video of Kris' father, Ninoy Aquino, receiving kisses from two women on an airplane. Kris responded first with a long message on Twitter and Instagram, and then again with a callout video broadcasted on Instagram Stories and Facebook Live.

Facing her cameras, Kris delivered an impassioned 17-minute message that essentially asked the Asec to stop disrespecting her parents' legacy, or else face her instead. Kris began by explaining that a line had been crossed, and that while she had mostly been able to keep her cool until then, she could no longer tolerate Uson's continuous remarks against her family. She held back tears as she explained why the video that Uson posted was so hurtful, and then repeatedly challenged the Asec to confront her personally. It was emotional, if at times melodramatic; it was eloquent, if at times a tad obnoxious. But in its entirety, it was absolutely fucking glorious. Kris Aquino went HAM.

“Higante naman ‘yung binangga ko, at inaamin ko ‘yun.”
Early on, Kris acknowledges what Mocha Uson has become: a pro-administration titan with a level of influence that cannot be ignored.

“Mom ko ‘yun. Dad ko ‘yun. At winawalang-hiya na masyado ang alaala nila.”
Throughout, Kris makes it clear that she wants to keep politics out of the discussion. She wants everyone to know what this is really about: family.

“Turo ng mom, ‘Never show them that they hurt you.’”
One of the best things about this video is that it's not drama you can fake. Kris Aquino's emotions were on full display, and she would constantly approach the brink of tears. But she repeated—perhaps also to herself—that her mother, former President Corazon Aquino, would want her to be strong in that moment.

“If there’s one thing I got from my dad, it’s courage. It’s courage to be able to speak up for those who cannot speak. It’s courage to be able to speak your truth, to say what you want to say but still be respectful, and to not be afraid to go against giants.”
Forget what you know about Kris Aquino for a second and consider this line for what it is. It's actually a powerful and touching memory of her father, and she uses it to preface the discussion.

“If I allow those lies about my parents to continue, I am not worthy to carry their name.”
Despite her presence, her voice, and her platform, Kris had mostly refrained from politics, and had never made disparaging comments about the Duterte administration or about Mocha Uson herself. But now, Kris recalls what's at stake. To her, this isn't just a retaliation—it's a responsibility.

“This is a direct challenge to you. Face me. Face me anywhere. Text me—you can find the number, ang dali. Name the place, name the location. Let’s carry it live. Bring all your followers, I can stand alone.”
Like we said, she does not mince words. Here, her emotions begin to reach a boiling point.

“Balahura din ako eh. Ganyan eh. Ganyan ang labanan eh. Kailangan ka talagang lumaban. I’m sorry na ganito ang nangyari sa bayan natin, na in order for you to be heard, you have to speak this language. In order for people to listen to you, you have to shove the truth in their faces. But the truth is: Yes, my father is a hero. Yes, my father died for this country.”
There's something profoundly satisfying about seeing a long-dormant voice of the opposition finally rise up to speak the truth to Mocha Uson.

“I am giving you fair warning: Isa pa. Isa pa na bastusin at babuyin mo ang tatay at ang nanay ko. Magtutuos tayo.”
She really could have dropped about five mics at this point, but she kept going.

“Tama na. Girl, ako na lang. Kayang-kaya ko. Anytime, anywhere—say what you want about me. Say the harshest words you want, I can take it. But spare my parents.”
While the video sounded like a challenge, it's also actually a plea.

“Wala akong inuurungan—at hindi kita uurungan.”
Tune in for the next episode of the saga.