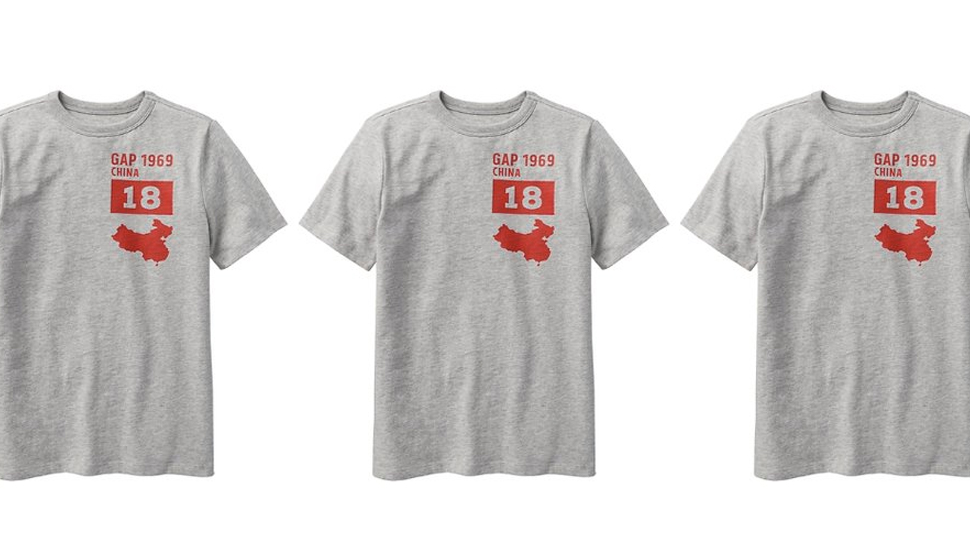 Following the racial tensions that arose from H&M's "Coolest Monkey in The Jungle" hoodie, a new untoward political entanglement has hit the world of fast fashion. This time, American retailer Gap has walked right into a geopolitical dispute with China, all because of a heather gray, jersey cotton graphic T-shirt.

Over the past week, Chinese social media users voiced outrage at the Gap for selling a T-shirt that depicts what they believe is an incomplete map of China. Specifically, the map printed on the T-shirt did not include Taiwan, parts of Tibet, and islands in the South China Sea:

Its exclusion of Taiwan in particular has been taken as an affront by adherents to the One China Policy. Realizing the implications, Gap quickly posted an apology on Weibo, saying the company "respects China's sovereignty and territorial integrity," and that they were "extremely sorry for this unintentional mistake."

But the Gap is only the most recent foreign private entity to capitulate to Chinese territorial claims. Earlier this year, Chinese authorities blocked the Marriott Hotel's website after it had listed Tibet, Hong Kong, Macau and Taiwan as separate countries. Zara, Delta Air Lines, and Qantas faced the same problem. Oh, and of course there's...us.

As part of their apology, the Gap also resolved to pull the shirt from shelves in Chinese markets. That likely means it will be tough to get your hands on the shirt in your size, which is too bad, because it would've made for a great edgy statement shirt. Perhaps you could get a nice Team Manila T-shirt from Lazada instead.