The Filipina diplomat and legislator was responsible for pioneering international laws on women's rights.

A New York Times obituary is more than just a legal announcement of a person's passing. Over the years, a Times obit has become a sort of posthumous honor that details the contributions that the subject has had on his community and country.

Since 1851, the Times has published thousands upon thousands of obituaries. But it wasn't till a few months ago that someone realized that this section has been dominated by white males—and that countless women had been overlooked.

Beginning on March 8, 2018—fittingly, International Women's Day—the NYT has begun to correct this by publishing obituaries of women throughout history whose obituaries were not included in the Times. The project, called "Overlooked," included in its first batch of late obituaries those for journalist Ida B. Wells, a black American woman who covered the racially motivated lynchings in the US; photographer Diane Arbus; poet Sylvia Plath; and transgender activist Masha P. Johnson.

"Leticia Ramos Shahani is a name every feminist should know," the obit opens, calling the Filipina diplomat and legislator "a pioneer in the international women’s movement."

Shahani led the drafting of the landmark United Nations Convention on the Elimination of All Forms of Discrimination Against Women and Children (CEDAW), also known as the international bill of women's rights, which was adopted by the UN in 1979. Furthermore, the NYT article reads, "At a time when few women had a place in statecraft, she became one of the highest-ranking women at the United Nations. In her native Philippines, she made labor and rape laws fairer to women and integrated gender into all kinds of policymaking." 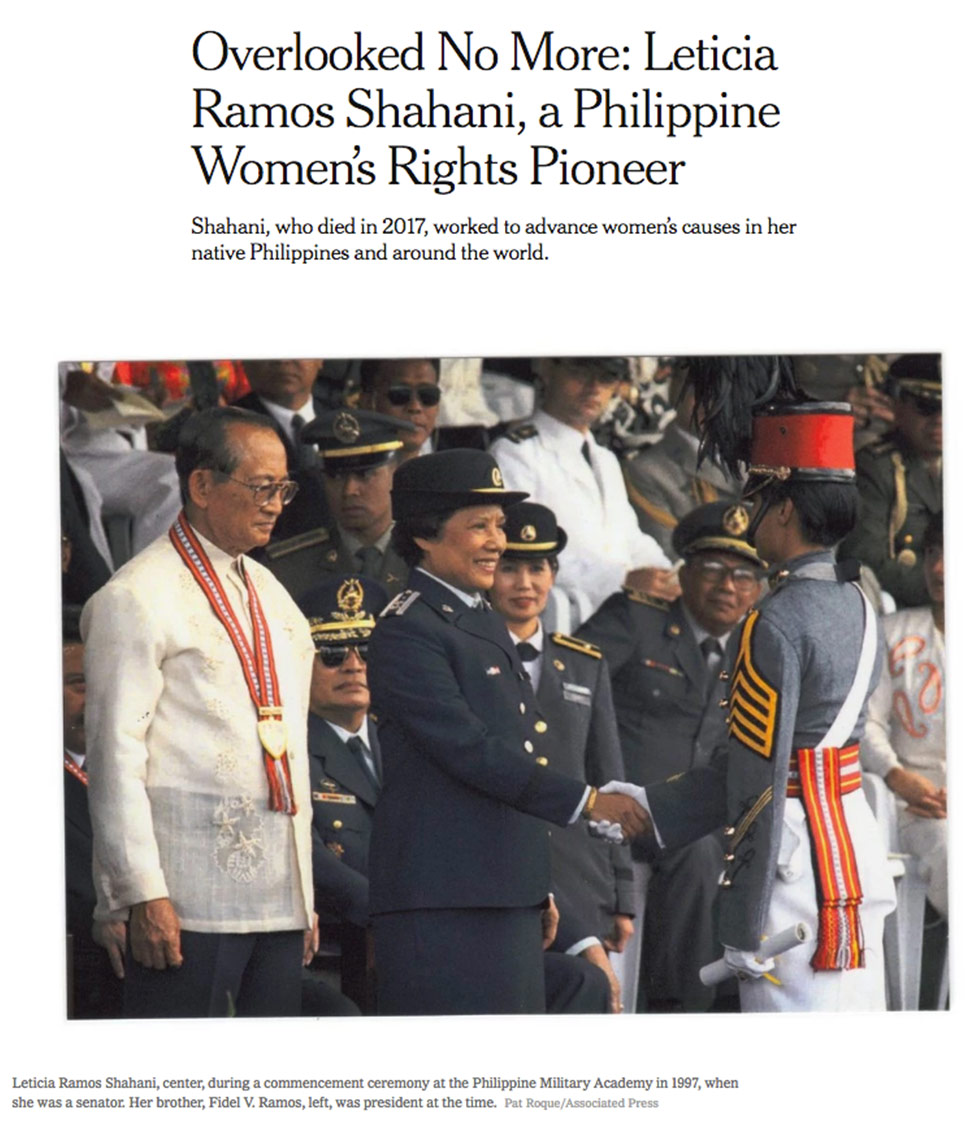 The article details Shahani's long political career, mentioning the little-remembered fact that, in 1985, while serving as the UN assistant secretary-general for social development and humanitarian affairs (which made her one of the UN's highest-ranking women at the time), she was asked whether she supported Ferdinand Marcos or Corazon Aquino in their campaigns for the presidency in the snap elections. "I am for change — that’s why I am for Cory,” Shahani replied, marking her as the "first high-ranking Philippine official to come out in Aquino’s favor, despite her family ties to Marcos and the prominent role that her brother, Fidel V. Ramos, played in the military and police command."

After the EDSA Revolution, Shahani went on to serve back in the Philippines as President Cory Aquino's undersecretary of foreign affairs, and then as the first female Senate pro tempore.

The NYT series "Overlooked" began as a "history project" by Amisha Padnani, the NYT's digital editor for the obituaries page, "recalling the lives of those who, for whatever reason, were left out of The Times’s obit pages."

Though William McDonald, the NYT's obituaries editor for the past decade, has said, "We make no judgments, moral or otherwise, about human worth. What we do try to judge, however, is newsworthiness, and that’s a whole other standard," this series acknowledges that there is judgment, and that it can be a flawed process.

"Yet who gets remembered—and how—inherently involves judgment. To look back at the obituary archives can, therefore, be a stark lesson in how society valued various achievements and achievers," reads the introduction to "Overlooked," written by Padnani and Jessica Bennett (the latter is NYT's first gender editor).

The paper plans to publish one additional obituary a week under the initiative, and has asked readers to nominate subjects.

Since 1851, obituaries in The New York Times have been dominated by white men. Now, we're adding the stories of more women.

We’ll be adding to this collection each week, as Overlooked becomes a regular feature in the obituaries section. https://t.co/xlUR0vjNvL pic.twitter.com/ofJ2KcyZuX