He also created a 'Lesson Playlist' so students can destress and do tasks at their own pace. 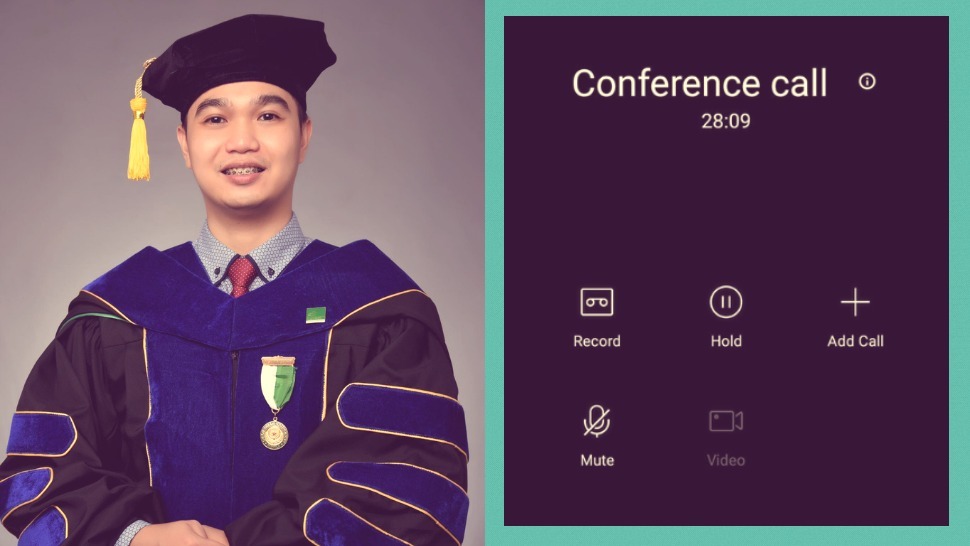 Aside from students, teachers are also having a hard time adjusting to the new system. A lot of them have to prioritize their students first before anything else, even themselves, just for the students to have the best education that they can possibly get even during trying times.

In a post on Facebook, Dr. Cajimat shares how using a mobile feature called Conference Call helped him connect with his students during online classes.

With this feature, the students and the professor won’t be needing any internet connection or some high-tech gadgets to contact each other because students will only need to buy a sim card (same as what their professor is using) which costs less than a hundred pesos, and any kind of mobile phone—with or without a camera. The students won’t also need to buy prepaid load because the teacher will be the one to call them. “Signal lang, sapat na,” according to Dr. Cajimat’s post.

In an interview with the professor, we asked how he came up with this idea and he said it was because some of his students live in areas with poor internet connection while some can’t afford to pay for internet and buy new gadgets.

“Here in our province kasi, some, if not, most of our students came from areas which do not have, or have poor internet connection. And also, most of our students [can] only afford unlimited calls/texts [load] which have longer expiration, and of course, cheaper than internet load packages. [And] through teleconferencing, it is not required that both ends (caller/receiver) have cellphone loads.”

If you are wondering how the students get their materials without a video, Dr. Cajimat already sent the modules for the whole semester even before the online classes start so that his students can print it before the lectures.

“I sent all my materials na for the whole semester. Para in that way, minsanan nang mada-download ng students lahat ng materials. [Also] cheaper ‘yun kasi kahit once lang sila mag-load for internet. And then during the Teleconference, I will just ask them to open the material they have downloaded, and then while I am talking, I am telling them which page to look at, ganun.”

Although unlike communication apps like Discord and Zoom, conference calls have a limit of six people in a single call, for Dr. Cajimat, it is better than calling them one by one, and it is also recommended for small group discussions especially for his thesis writing and research subjects, so he can focus on his students more.

Having 150+ students, Dr. Cajimat is trying different teaching strategies to help his students and himself in these trying times. One of them is the Lesson Playlist where he would send them a list of tasks that they should finish within five weeks BUT at their own pace. No pressure.

Instead of him giving them a deadline, the students must make their own deadlines per task as long as they will fulfill it in five weeks because another set of tasks will be given after that. One more thing, the Lesson Playlist has an Activities for Wellness option that lets them do random tasks outside acads. Like this one:

Being a Biology professor, he knows that increased levels of stress can weaken someone's immune system, and having a weaker immune system means they're prone to diseases.

About The Author
Bernadette Rivera for Candymag.com
View Other Articles From Bernadette
Get The Latest Updates From Esquire!
Subscribe to our newsletter!
Latest Feed
Load More Articles
Esquire Money

Vietnamese Will Be Richer Than Filipinos Before 2020 Ends: IMF
All Photos
Comments
View As List