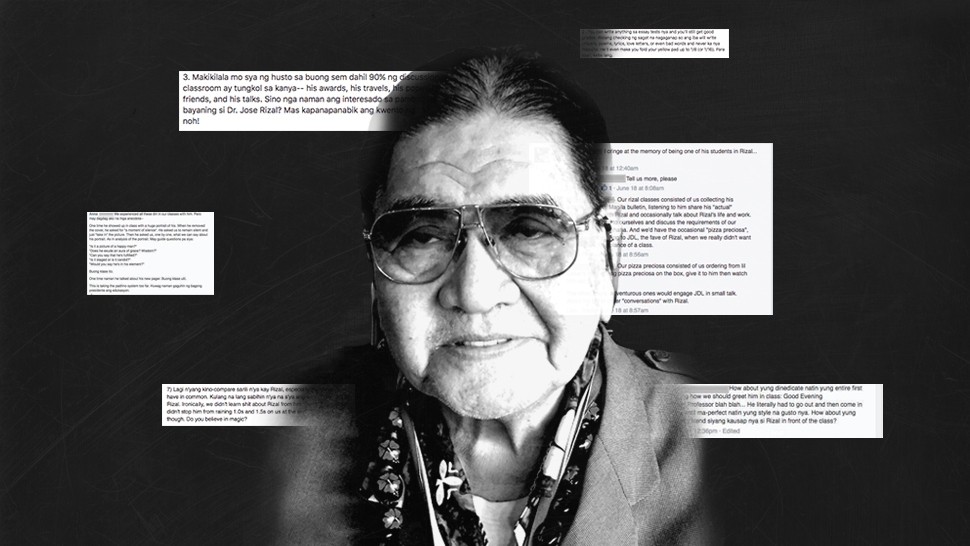 In June 2016, the Philippine Daily Inquirer reported that President Rodrigo Duterte was planning to appoint Prof. Jose David Lapuz—his former professor at Lyceum of the Philippines—as the new chair of the Commission on Higher Education (CHED).

But because the term of CHED's current chair, Patricia Licuanan, lasts until 2018, Prof. Lapuz hasn't stepped in to that position. Despite the fact that Chair Licuanan appears to have been pressured to step down, she has hung tough and has kept her CHED post (so far). Besides, there were some hard-to-be-ignored issues against Lapuz.

For one, Lapuz had been tagged as a plagiarist. Rappler reported: "At least 20 of the 61 articles in Lapuz's book, Perspectives in Politics: Public and Foreign; Rationalizing the Irrationalities of Politics, were tainted with plagiarized text."

Lapuz owned up to the plagiarism. In a July 24, 2016 letter to Rappler he declared, "Of course, I take full responsibility for my actions. My heart aches, my heart feels agony and sorrow for these sins of commission and omission in my writings." He went on to say that some of the segments that he wrote in the 1990s originally had "commas and quotation marks but which we were miss (sic) when retyped in the standard typewriter of that time."

This week, Lapuz's name appeared among a list of appointees as the presidential consultant on education and international organizations.

Many of Lapuz's former students are alarmed by this development, as they implied that he's not exactly the sharpest tool in the shed. Heck, he may not even be in the same shed as the rest of us. As proof of Lapuz's out-of-this-world persona, we have compiled eight anecdotes (more like incident reports, really) that have made us question our own perception of reality. We've consolidated these stories from the first-person accounts of Lapuz's former students. Here are eight of our favorites (translated and edited for brevity and clarity).

1. If a Picture Paints a Moment of Silence

One time he showed up in class with a huge portrait of his. When he removed the cover, he asked for "a moment of silence." He asked us to remain silent and just "take in" the picture. Then, he asked us, one by one, what we could say about his portrait. As in, an analysis of the portrait. He even had the following guide questions:

"Is it a picture of a happy man?"
"Does he exude an aura of grace? Wisdom?"
"Can you say that he's fulfilled?"
"Is it staged or is it candid?"
"Would you say he's in his element?" 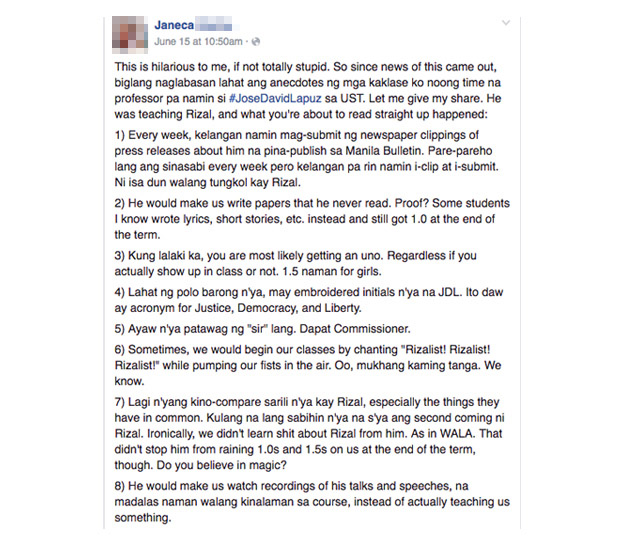 If you're a guy, you're most likely getting a grade of "1"—regardless of whether you show up for class or not. Girls usually got 1.5.

I remember one of my classmates writing down the lyrics of "I am but a Small Voice" for her final exam. Anyway, all the girls in the class would have a grade lower than the boys. So, why sweat it?

His no. 1 requirement for his students in his Jose Rizal class was to have them submit clippings of his press releases, which had been published in broadsheets. The more creative you were at sticking the clippings on bond paper, the higher your grade. So, I embellished my clippings with fresh flowers straight from Dangwa so I got a very high grade for it.

At the end of the school year, he told us to have the clippings that we had gathered be bound. He then said he would donate the compilations of his press releases to the National Library.

4. Imaginary Tests and Where to Find Them

He gives essay tests and you can write anything you want and you'll still get good grades. He never checks the papers. I know people who wrote prayers, poems, lyrics, love letters, or even bad words. He never reprimanded them. He'll even make you fold your yellow pad up to 1/8th or 1/16th of its size. We don't know what that was for.

5. Not the Reality TV You Need 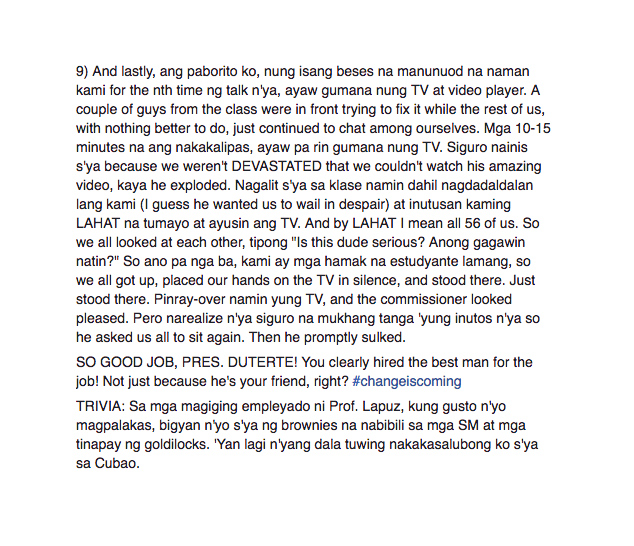 He loved making us watch videos of his talks. There was one time, though, that the TV and the video player wouldn't work. He spent 10 to 15 minutes trying to make it work.

Perhaps, he was devastated that we wouldn't be able to watch his amazing video. He practically exploded in anger. He asked all 56 of us in class to make the TV work.

I was thinking, "Is this dude serious? What are we going to do?" We were at a loss. So we all just stood up and some of us placed our hands on the TV. We prayed over the TV. He looked pleased.

Then, when he realized that we just looked stupid trying to do as he asked. He then asked us to sit down while he continued to sulk.

6. Meet and Greet on Steroids

Our entire first meeting was devoted to practicing how we should greet him in class, "Good evening, Commissioner Professor..." He literally had to go out and then come in several times until he felt that we had perfected the style of greeting that he wanted.

7. The Madness of Monograms

All his polo barongs were embroidered with his initials, "JDL." However, he explained that it was actually an acronym for Justice, Democracy, and Liberty.

He always compared himself to Jose Rizal, short of saying he was the national hero's second coming. Ironically, we didn't learn anything about Rizal from him. As in, zero.

You'll really get to know him when he's your teacher. That's because 90 percent of the class discussions are about him—his awards, his travels, his popular friends, and his talks. Because, really, who'd be interested in the national hero Dr. Jose Rizal? It seemed like the professor's life story was more exciting! 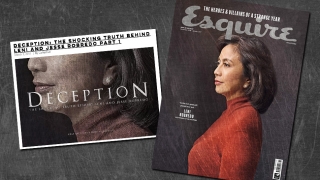