The Style Legacy of the Beastie Boys 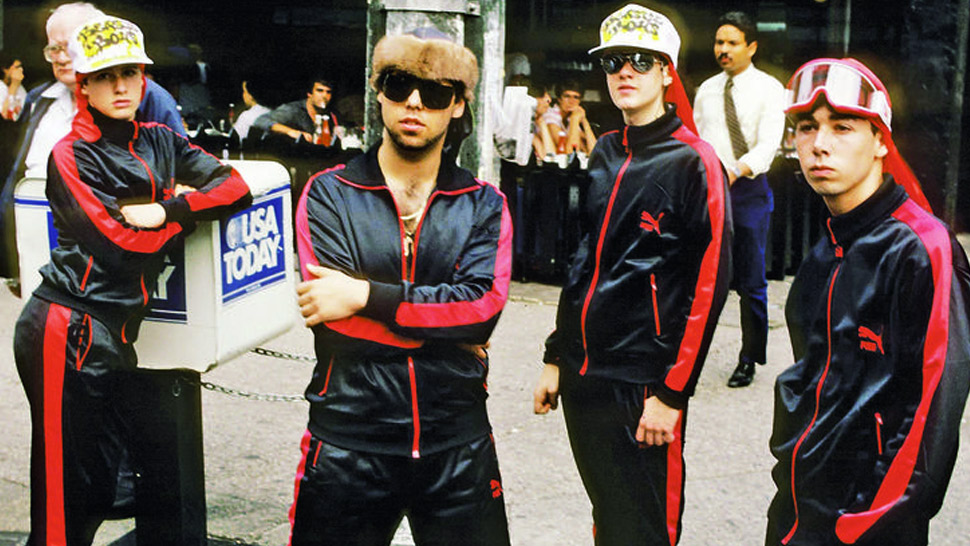 That’s the writer Luc Sante’s description of New York in the summer of 1981, at the moment when that intoxicating maelstrom stopped dead, bent double, clutched its belly and barfed out the Beastie Boys, a band that has a claim, a strong one I think, to be among the most influential groups ever to appear from that most influential of pop music cities.

The Beastie Boys—initially Michael Diamond, Adam Yauch, John Berry, and Kate Schellenbach—began as a hardcore band, supporting Bad Brains and the Dead Kennedys at Max’s Kansas City and CBGB. (“The punk manger over on the desolate Bowery,” are Sante’s words for the latter venue; it’s an upscale menswear store now.) Later, as hip-hop tightened its grip on the five boroughs and beyond —a grip still not released—Berry was replaced by Adam Horovitz and Schellenbach departed, too.

By 1986, when the Beastie Boys finally released their debut album, Licensed to Ill, they were well established as a three-piece—Mike D (Diamond), MCA (Yauch), and Ad-Rock (Horovitz): triple trouble, ya’ll—and they were rappers to be reckoned with. They could have been awful, of course—educated sons of arty privilege, playing at street toughs—but instead they hit a vein in the culture. Their deliberately jarring collision of noisy downtown punk rock and feisty uptown hip-hop was an instant hit.

At first they were sold as straightforward tabloid terrors, brattish, objectionable, profane and—especially if you were 13 years old, as I was at the time—shockingly funny. They were, briefly, my generation’s Sex Pistols. (Public Enemy were our Clash.) And then they went and became something else, something altogether more compelling, making a series of sharp turns, releasing albums of increasing distinction, each wildly different from the one before it. They launched their own record label, their own magazine (both called Grand Royal, both much missed), they toured widely, they made anarchic music videos, they inspired countless younger musicians, both great (Eminem) and considerably less great (Limp Bizkit). Along the way they sold more than 50m records. The “stupid hat”, as Sante notes, was there to conceal the sophisticated man beneath it. It was also there because it’s fun to wear stupid hats.

In 2012, aged 47, Adam Yauch died of cancer. Two years later, Horovitz and Diamond announced that they would not continue as the Beastie Boys. They wouldn’t go on without their friend. And also, their jobs as Beastie Boys were done. Fervent, irreverent, questing, funny, and hip, the band was sui generis. The three MCs had carved a unique place for themselves in the annals of pop.

Since this is Esquire’s Music and Style Special, we’ve taken an extract concentrating on the Beasties’ various looks over the years. For this chapter of the book, entitled “No. Nah. Oh no. Ucch!”, Adam Horovitz met up with André Leon Talley, a semi-legendary New York figure himself as the scene-making former editor-at-large of American Vogue, to flip through some photos he and Mike D thought “best represented our band’s schmatta narrative”. Talley, “with his authoritative knowledge, offered his critique of our looks.”

Some critique. Take it away, André… 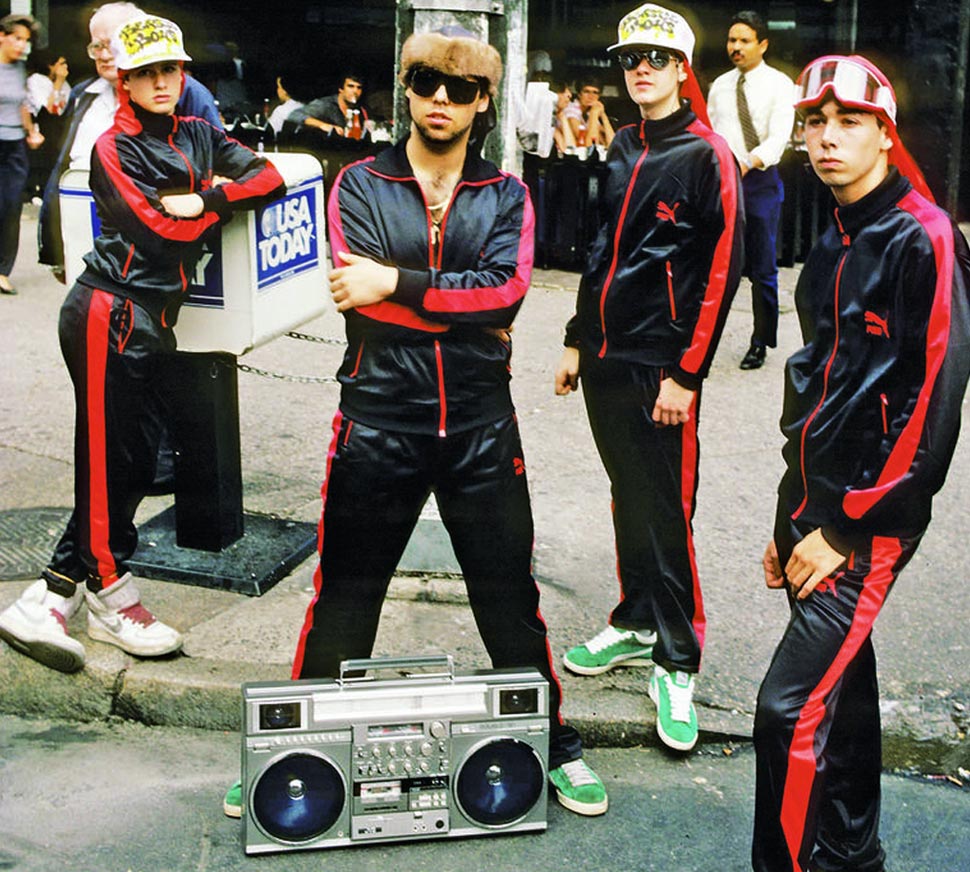 ALT: It cannot be you! Is that a girl? Look! It looks like a girl?!

AH: Is that a problem?

ALT: Nooooo. But it’s got the body of a girl! Oh, I’ve enjoyed this because I’m—I mean, do you want this? I mean, ucchh! The only great thing about this is the boombox. And the stripes. And you all are posing too much—you’re posing like the supermodels. You’re giving us a supermodel pose. Strike the pose—“Vogue”. 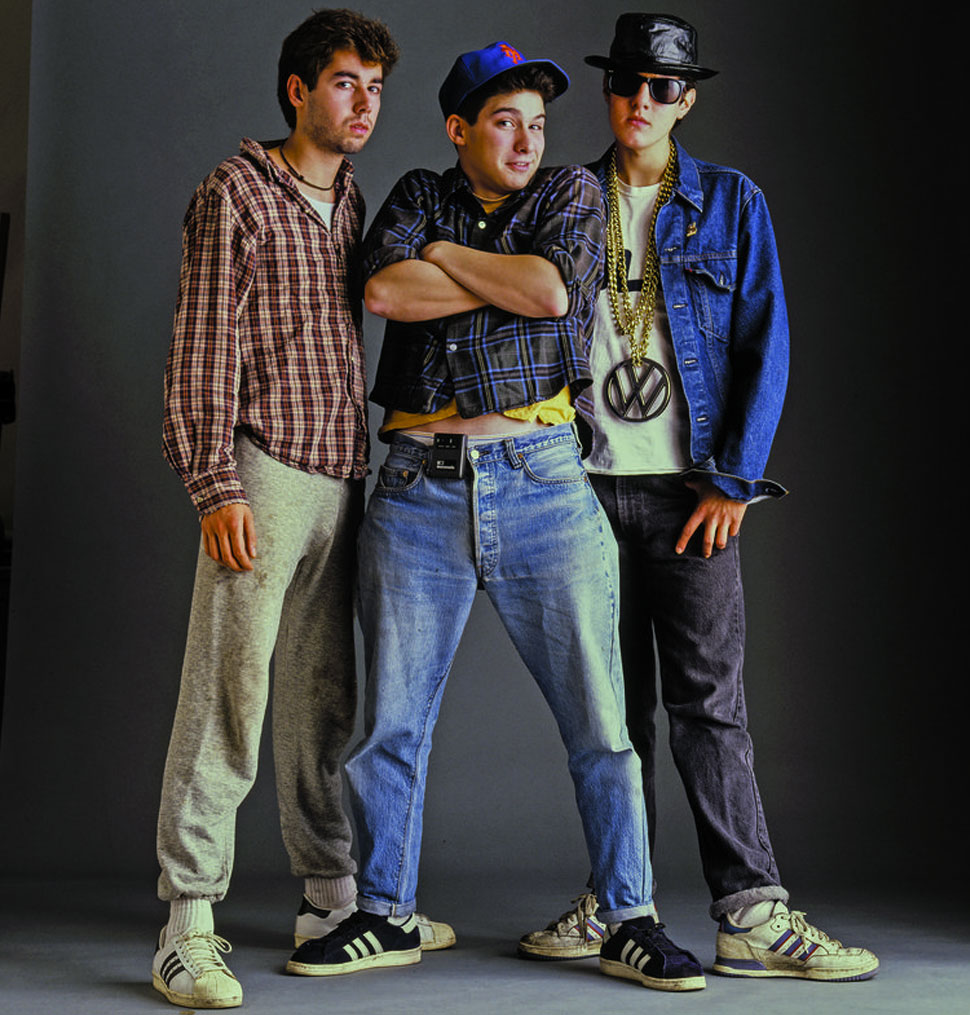 ALT: This one passes muster because it’s kind of neutralised. It’s neutralis-ing—it’s not really a disruptive look, but it is a look that’s safe. You’re safe here, you’re playing it safe. I wouldn’t know they were pop stars unless you told me they were pop stars. Pop stars tend to take much more risk. Why did you wear these clothes then? You had no money to buy outfits? You were just experimenting —this was comfort—you didn’t want to branch out into style. OK. The VW accessory. That beeper—ucchh! How could you have a beeper as an accessory? 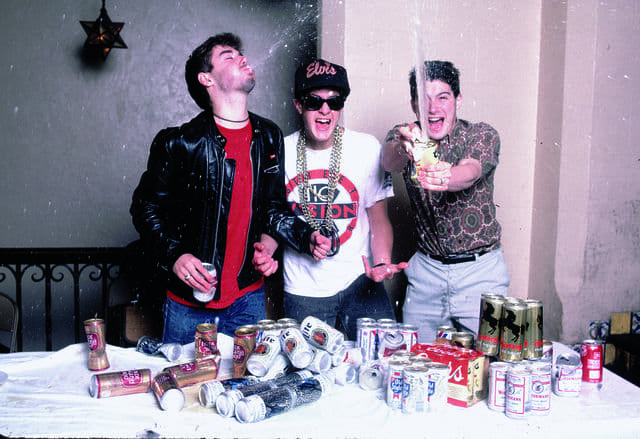 ALT: Moving on and you’re a bit more upwardly mobile, you’re taking a bit more of a risk. You’ve got a lot of beer. Mostly it’s a T-shirt phenomenon here. [Points to Michael Diamond and Adam Yauch.] It’s pre–Banana Republic over here. [Points to AH.] You’re wearing pre-Wasp, high Wasp. It’s high Wasp. Wasp-meets-biker boy. So you’re, you’re experimenting here, it’s a bit more of a style moment, it’s a bit edgier. I would say that you were aspiring for the moment of being a pop star. 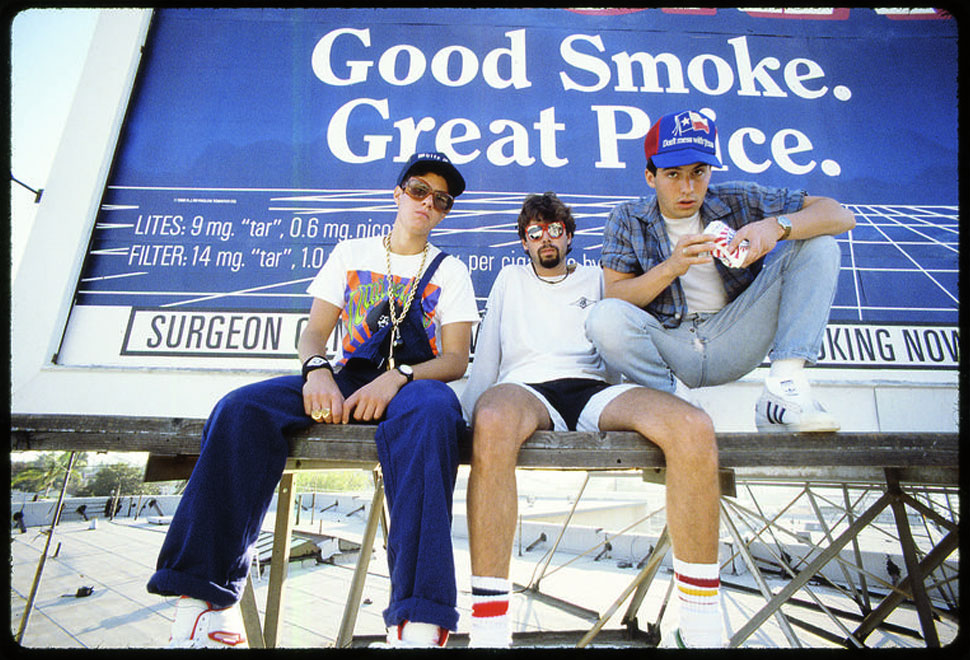 ALT: Ooohh, you’re trying to get hot here, sexy! What’s that crotch pose? Vanilla smoke shot, vanilla, ooooohhh, I would say this is a look that you might find today on Grindr. This is your pre-Grindr look. And it is not working. Whoever that is in the middle should have known not to look like that. That is not sexy. 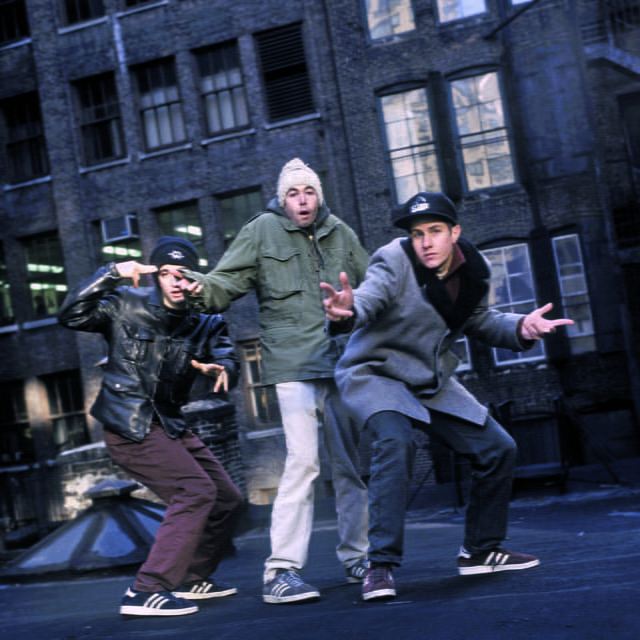 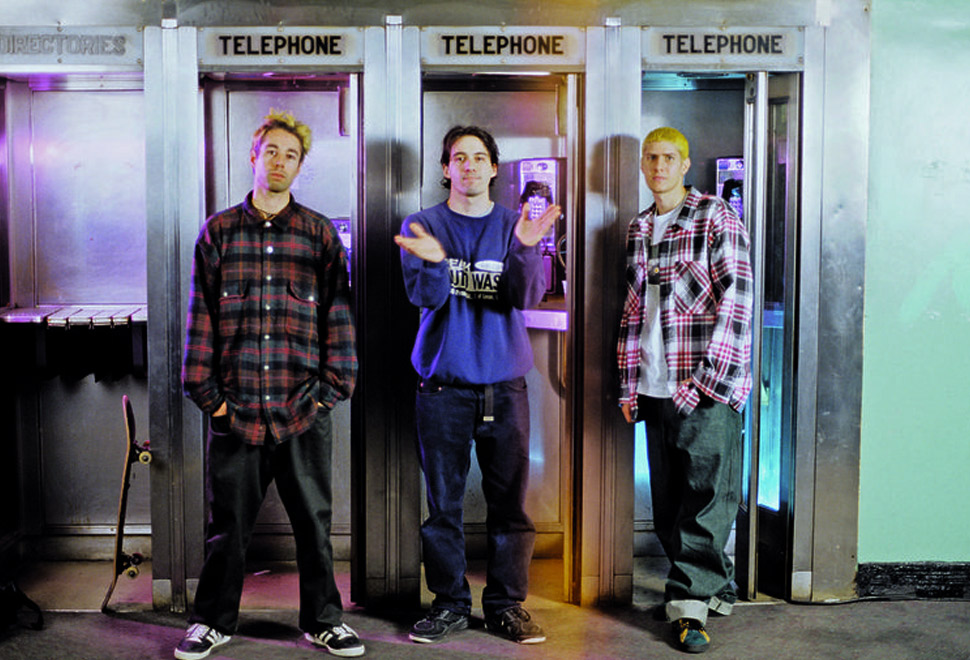 ALT: It’s sooo scripted, it’s so arch, it’s sooo perfect, it’s sooo unreal—these lumberjack grungy shirts —but this is grun-GE. That was the moment when grunge came about, you know, Seattle? So you’re feeling the grunge, but you knew what grunge was—so you got sort of grungy without being grunge, cause grunge would be dirtier. So there’s no dirt here. I don’t feel any soil, I don’t feel you rubbed around, you haven’t gone into the earth, there’s no dirt on it—it’s like perfect grunge, OK? 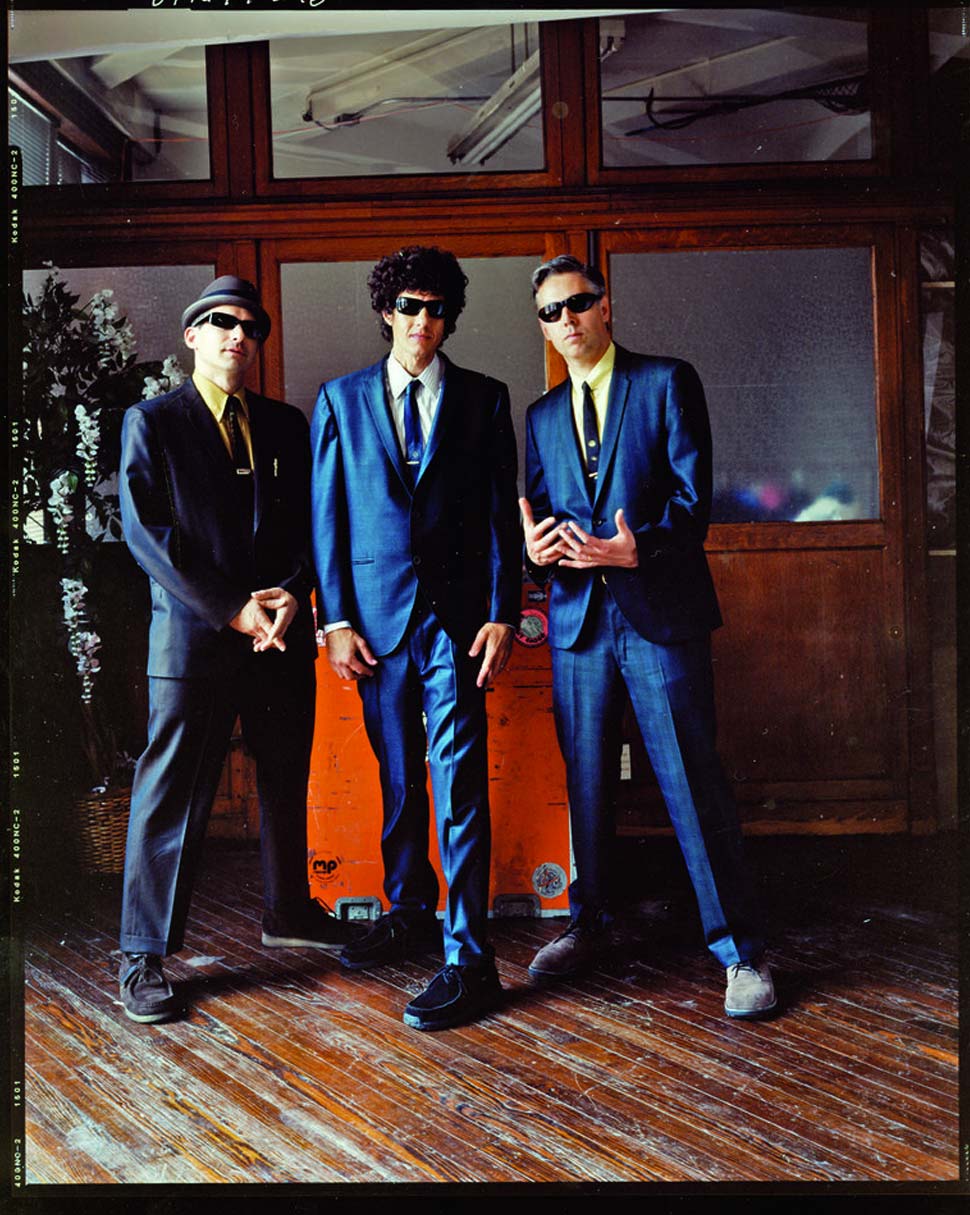 Beastie Boys Book by Michael Diamond and Adam Horovitz is published by Faber and Faber on  November 1.

About The Author
Alex Bilmes
View Other Articles From Alex Bilmes
Get The Latest Updates From Esquire!
Subscribe to our newsletter!
Latest Feed
Load More Articles
Esquire Money 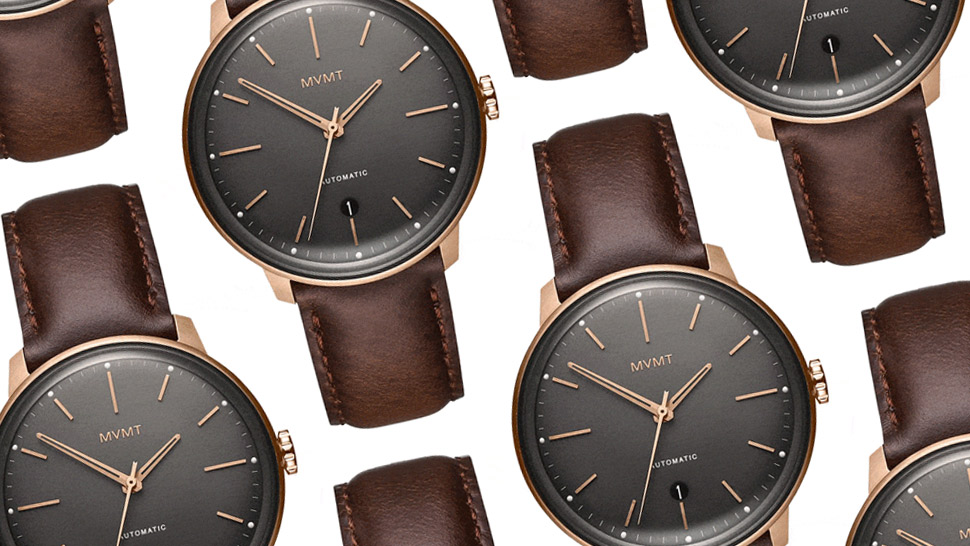 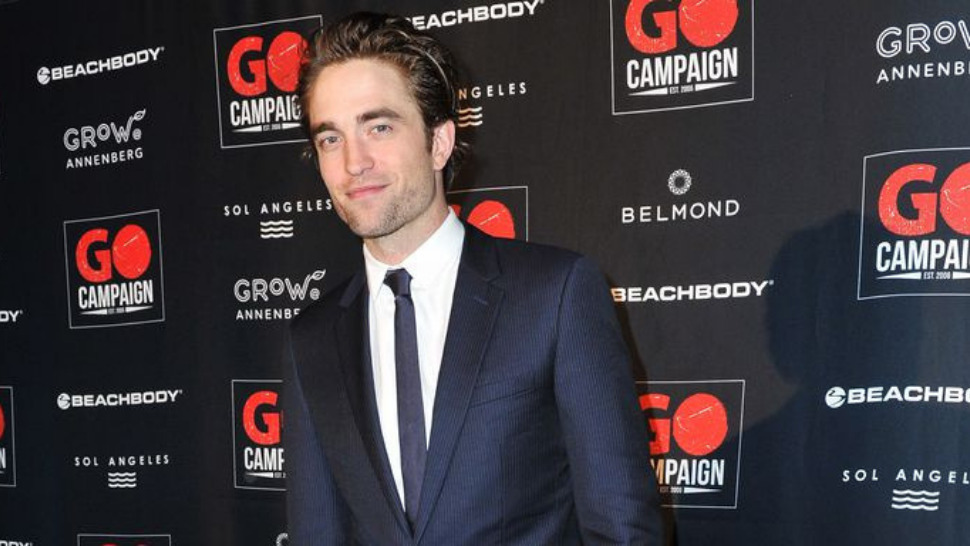