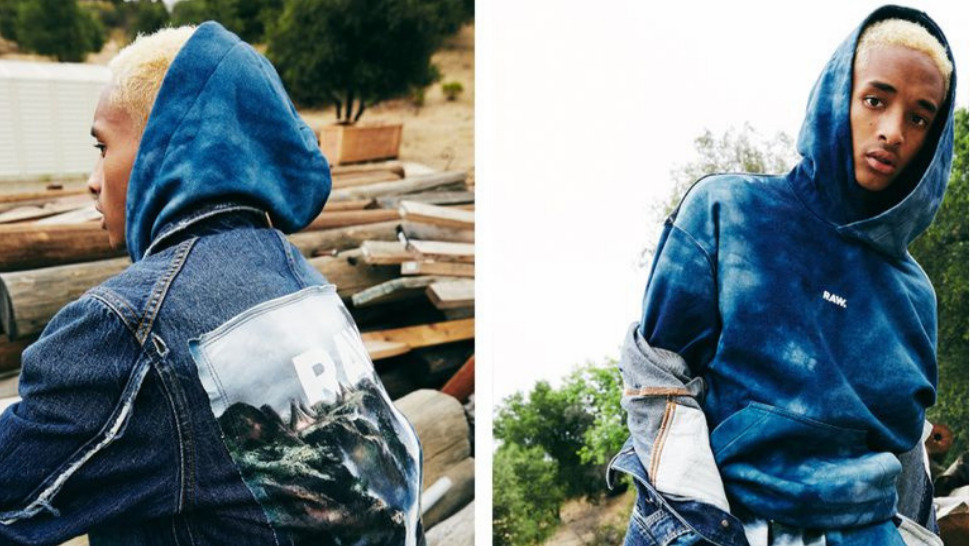 "Style icons?" Jaden Smith ponders the question; let's it hang in the air for a few seconds. I can't really gauge his facial expression because, well, it's almost pitch black inside the green room beneath G-Star Raw's Oxford Circus flagship store, the only real light source a thin beam shining out from an iPhone torch being held awkwardly above us by one of Jaden's crew.

I'm not sure why any of this is happening. I am, however, fairly certain that Jaden Smith has recently shaved off both of his eyebrows. Sometimes they never grow back properly.

"Poseidon. No—Pharrell first, then Batman, then Poseidon." We sit in silence for a moment. I'm allowed to ask five questions that have been carefully approved by Jaden's team. I should probably say something else. I don't say anything else. 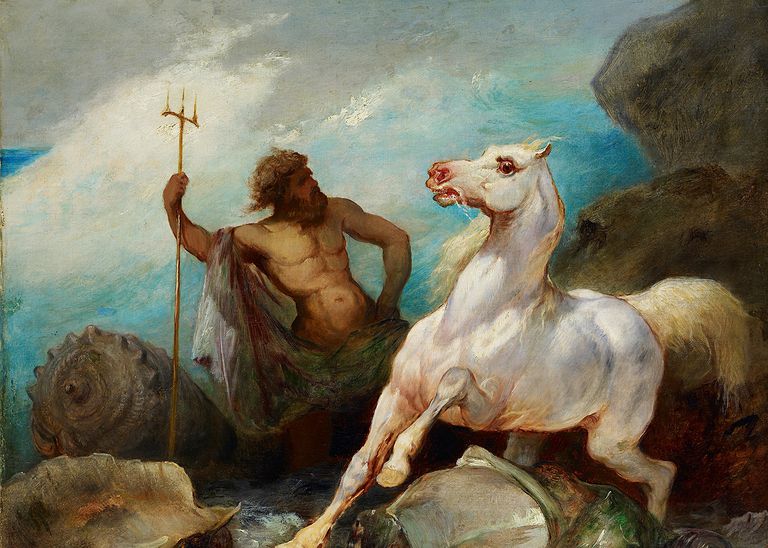 These are the things that I know about Jaden Smith: He is 20-years-old and his star sign is Cancer. His father is Will, his mother is Jada and his sister is Willow. He lives in Los Angeles and has taken both his own cut-off dreadlocks and a gold plaque of his album to the Met Gala. He co-founded an ethical drinking water company called Just Water, a carton of which I'm clutching as we sit side-by-side, in the dark, on a green velvet banquette. His crew are sprawled around us idly texting, their phones little glowing markers. He went to Kanye West's wedding dressed as Batman. He owns a Tesla. 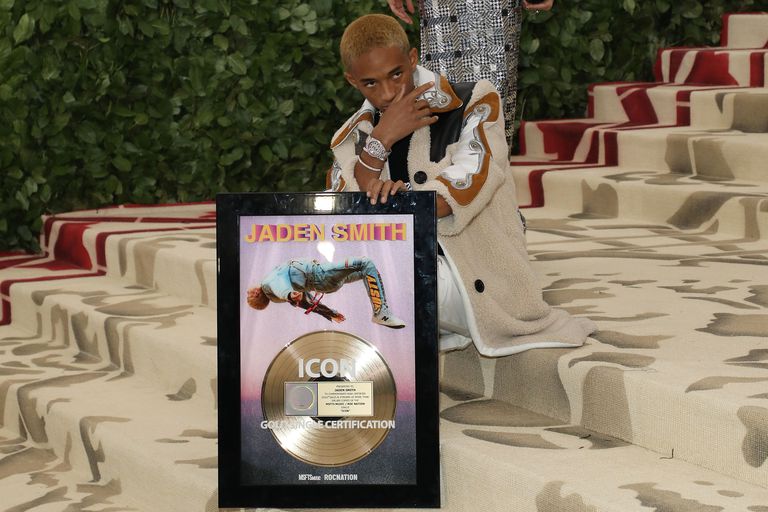 In person he is... pretty. Am I allowed to say that about my new Los Angeles-based friend Jaden Smith? It's true, though. He is slight with cropped platinum blonde hair and when he laughs it's high and sharp, un-curated and strange, like a hyena caught off guard. "Eh. Eh. Eh. Eh. Eh. Eh. Eh." He's wearing a cream hoody underneath a black military vest and an ecru pair of his intentionally frayed collaborative G-Star Raw jeans. His trainers appear to be a homemade splice of New Balance and Louis Vuitton—there's a small round gold women's watch glinting on his right wrist. It looks expensive. "Dark Fantasy," by Kanye West ft Teyana Taylor, rumbles, distorted and bass-heavy, from speakers somewhere out of sight. I take a sip of my Just Water.

In May of this year Jaden tweeted, "I Am Not Human And I Don't Speak English." On his 2017 song "Icon" he raps about being an "Icon living," but in person he seems young and nice and a bit melancholic. He has a new collection with G-Star Raw called "Forces of Nature" based on the elements (water, earth, and the eclipse), which is, ostensibly, why I'm here. 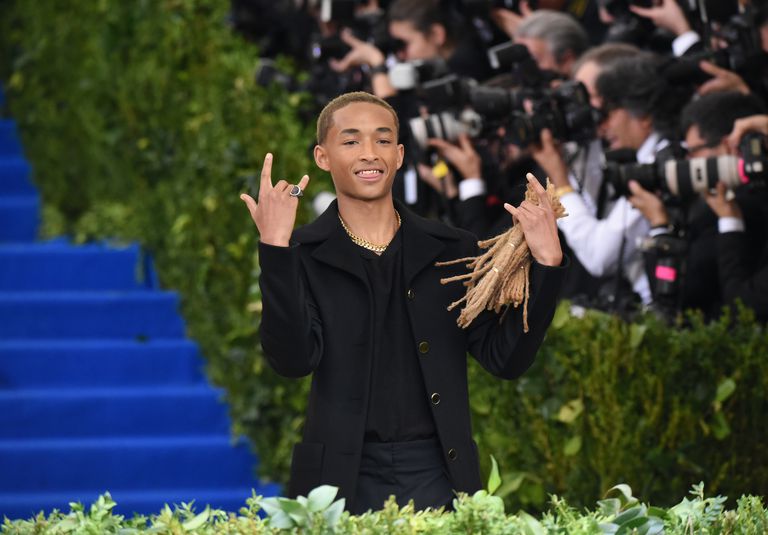 "Sustainability is so important to me because we’re talking about sustaining human life! That's the only thing we're talking about." He says this with great conviction, as a very big American-looking security guard in an Under Armour T-shirt and bad jeans (definitely not G-Star) patrols the empty space behind him. The Idle Boys never look up.

"The environment is important for everyone, but they just don’t know it. They don’t realize the dire situation that we’re all being put in, just by being on this planet, at this moment."

I think Jaden Smith would have a very cool end of the world bunker. Lots of bean bags and skateboards and Idle Boys in ripped jeans texting, texting through the apocalypse.

As we speak, hundreds of fans, mostly teenagers, are queuing in the dark outside the store, waiting for a free performance that Jaden will be giving later. A girl, about 16-years-old, will try and vault the metal barrier to jump the queue. She'll misjudge it and hit the concrete, then laugh it off, before security swarm around her.

"There’s so much industrialization and man-made containments and we ignore what’s around us, which is nature," Jaden says, staring at the wall straight ahead of us. "I wanted to do this collaboration with G-Star so that I could display nature and put nature on a platform. Have people look at it, which they don't."

"Water is my favorite element. I love swimming and surfing, that’s how my love for the environment started."

I wonder if Jaden and I could go surfing. Us, splashing about in late summer Santa Monica. I'd have his number saved in my phone as "J" and he'd call me bro and we'd go out there and catch the last waves at dusk. Me and My Close Personal Celebrity Friend, sharing a couple of Kombuchas on the ride back. I could be one of the Idle Boys; secure my place in the bunker. 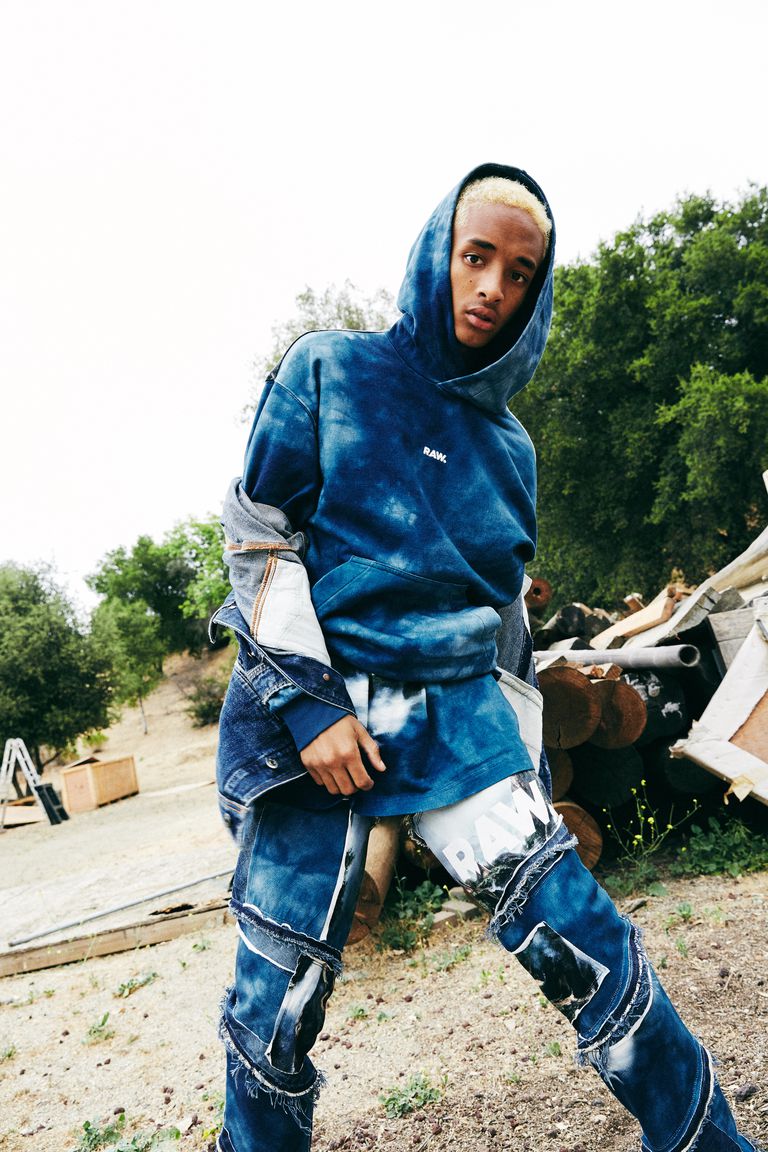 In an interview with the New York Times, Jaden once said: "It’s proven that how time moves for you depends on where you are in the universe. It’s relative to beings and other places. But on the level of being here on earth, if you are aware in a moment, one second can last a year. And if you are unaware, your whole childhood, your whole life can pass by in six seconds. But it’s also such a thing that you can get lost in."

My time is up. I could definitely get a few more questions in if I tried: Do you ever wake up and just not fancy it, Jaden? How's Will? Can a denim collaboration really put nature on a platform? What's Kanye West like? What if all the food runs out? Can we go surfing? What happened to your eyebrows? Except... I don't, we sit there in the dark for a few more seconds, before someone finds a light switch.

"Go with god, bro," Jaden says to me as I move to leave, the Idle Boys roused from their DM-sliding, moving towards and around him in ripped denim unison. At 8 pm Jaden will perform in the store. He'll bounce and dance and sing about being an icon and the teenagers will scream. Maybe the girl that laughed it off will have found a way in. 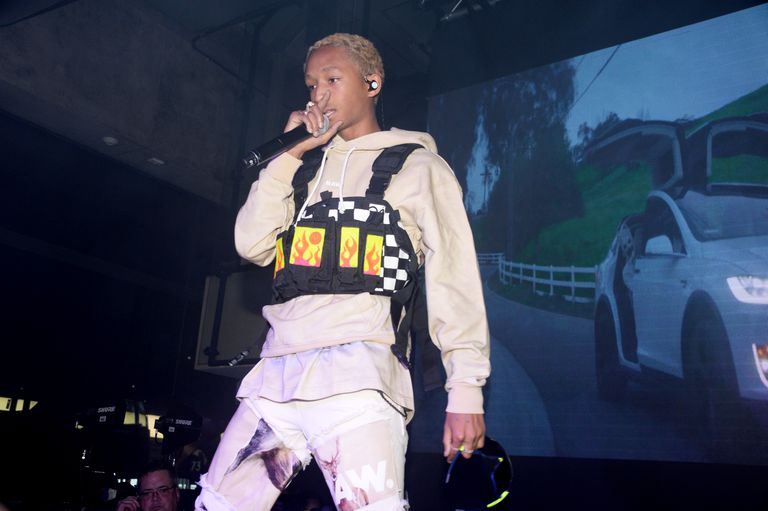 He turns and I go, whether it was with god or not I don't know. I'll leave that one with Jaden. 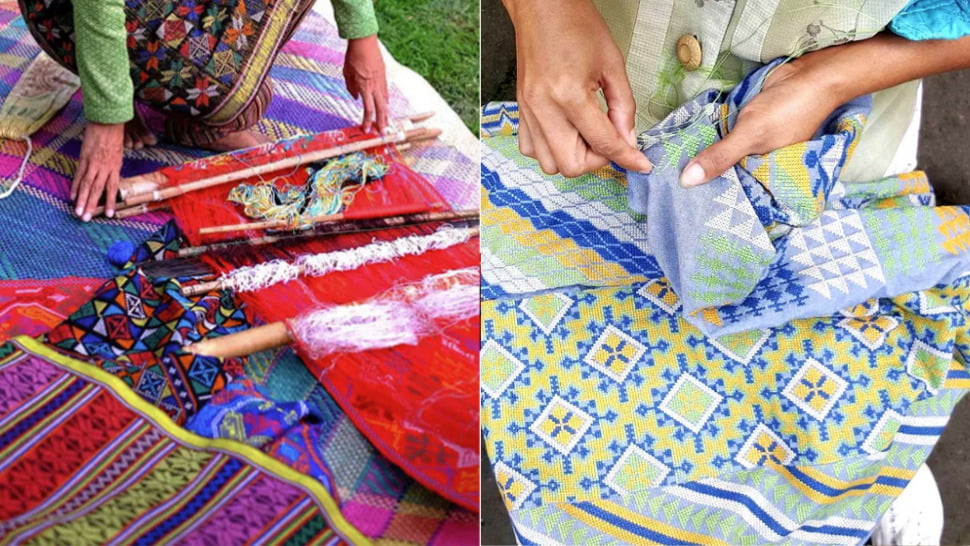 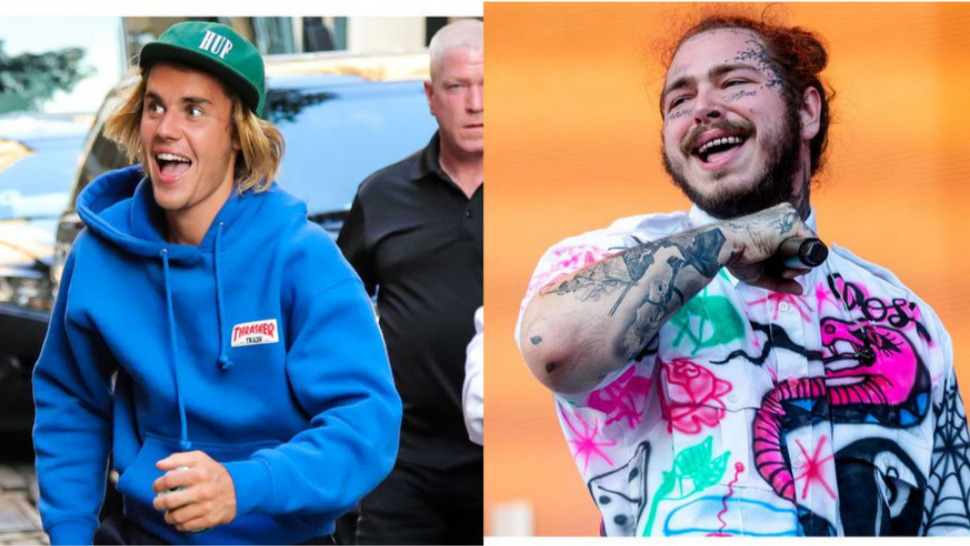