2018 Was the Year Our Pant Legs Got Wider, and So Did Our Perspective

It was the weirdest year for men's style in recent memory. And that's a good thing. 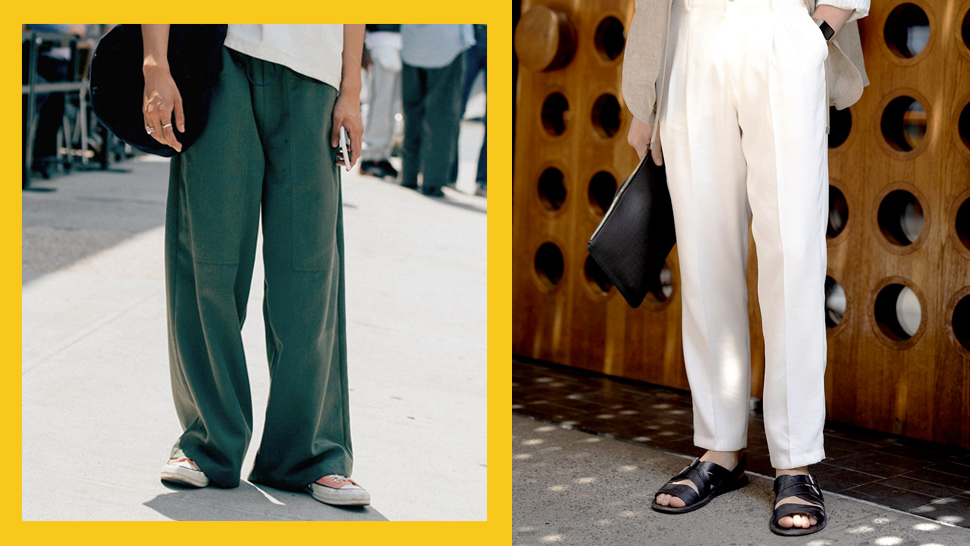 Pants tell a story. From the billowing bellbottoms of the Summer of Love and beyond, to the "like trousers like mind" ethos espoused by austerity-era, cigarette-legged British punks, it's never just been about covering up your legs. So what do you say about a year when everything from baggy jeans to trim trousers to straight-cut corduroys was in style? You say it was 2018: the year we changed our pants, our perspective, and who knows what else. 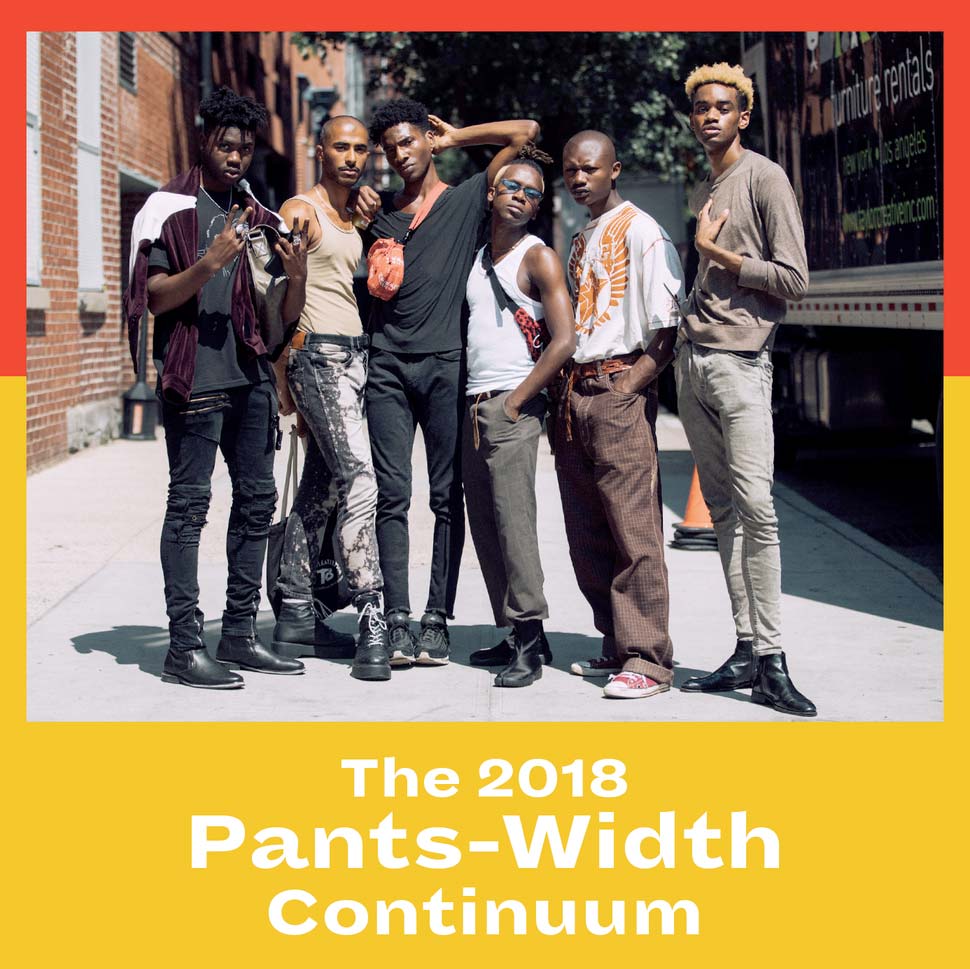 With 2019 closing in, there's the inevitable impulse to look back on the year that was and figure out just what the hell it meant. But 2018 defies convention. I'm not just talking about fashion, here. From politics to climate change to that fucking yodeling kid, this year was an onslaught, demanding so much effort and attention and giving back very little in the way of real solidity or comfort.

But here's the silver lining: When it comes to getting dressed, the uncertainty is actually pretty great. It's a brave new world out there, and we're writing the rules as we go along. Daunting? For sure. But also liberating. So, as we stand on the precipice of a new year, we're taking a look at what happened—and how it will inform us going forward. Strap in.

The era of skinny-jean dominance is officially over. And that's fine, even if you like skinny jeans. Because while we're used to seeing a shift from one chosen style to another, this time around the question isn't, "What will we wear now?" Instead, it's, "What else will we wear now?" It's not about substitution, but addition. 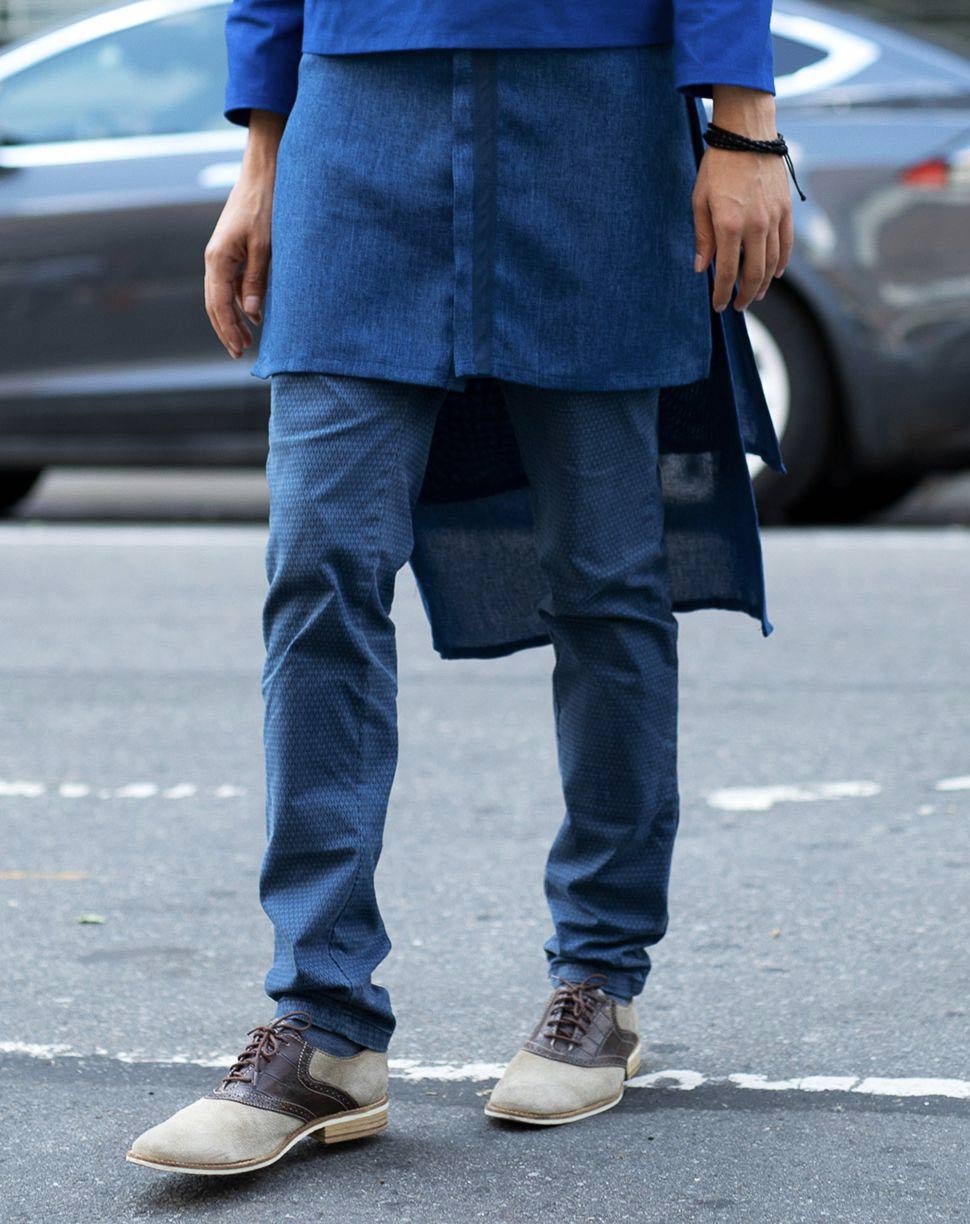 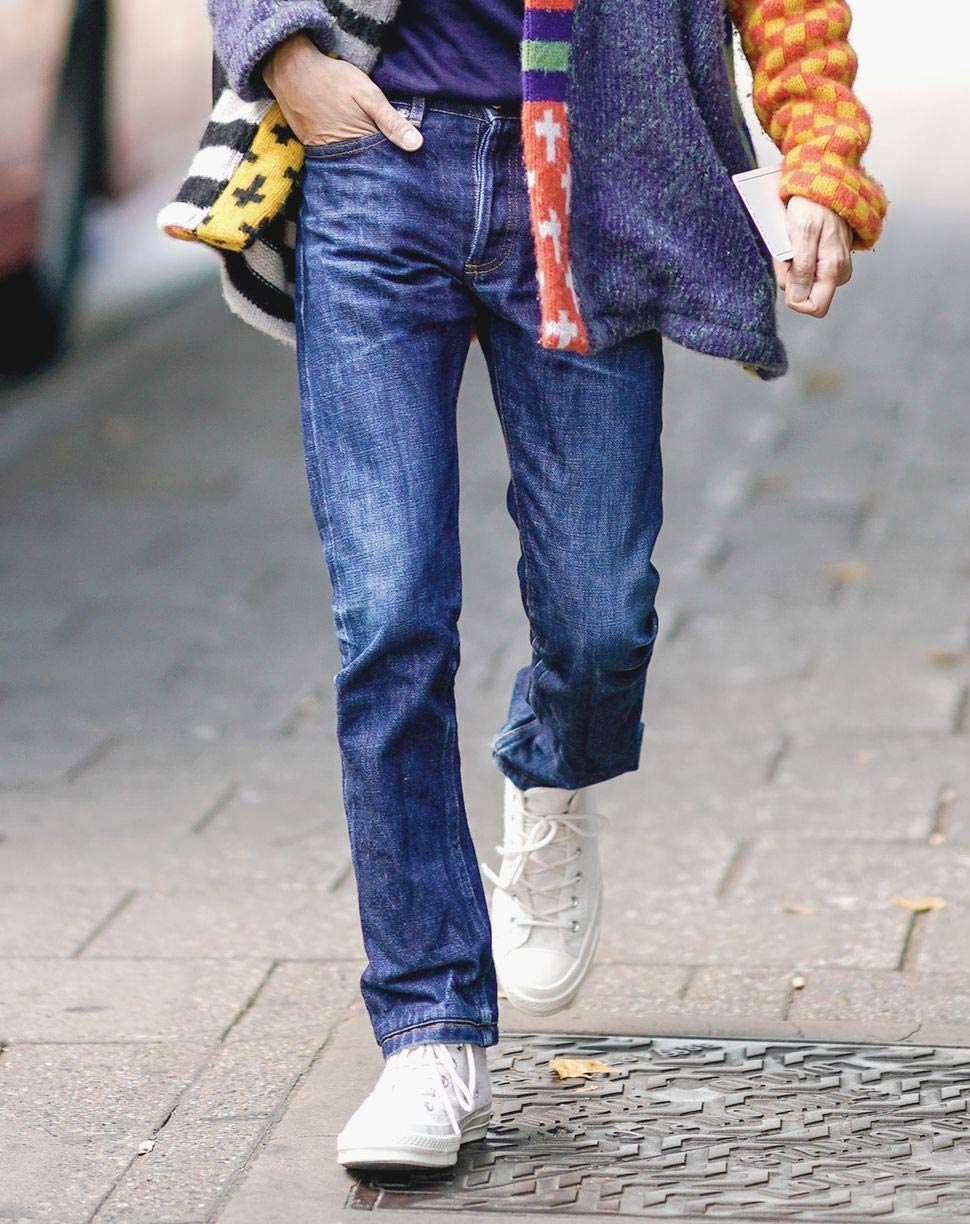 So while skinny jeans did indeed take a hit, and wide-leg styles have become more and more common among the cool-kid set, there was no hard-and-fast rule around what you could wear on your bottom half in 2018. That's why you could be walking down the street and see some Saint Laurent denim, a pair of cuffed-short Dickies, plus some pleated wool trousers—and they all felt right on time. 2018 was a choose-your-own-adventure of style. It wasn't just about widening your pant legs, but widening your perspective. 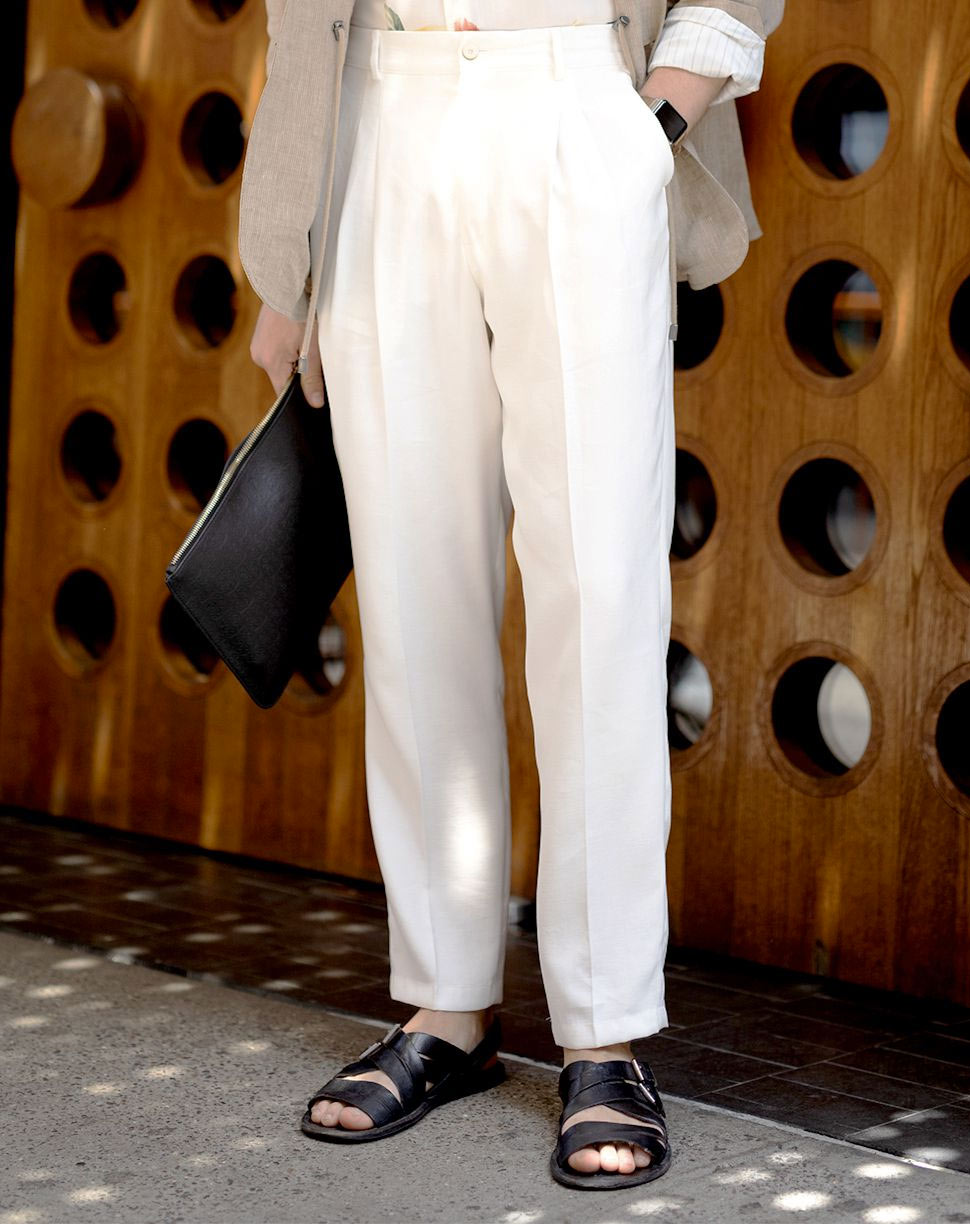 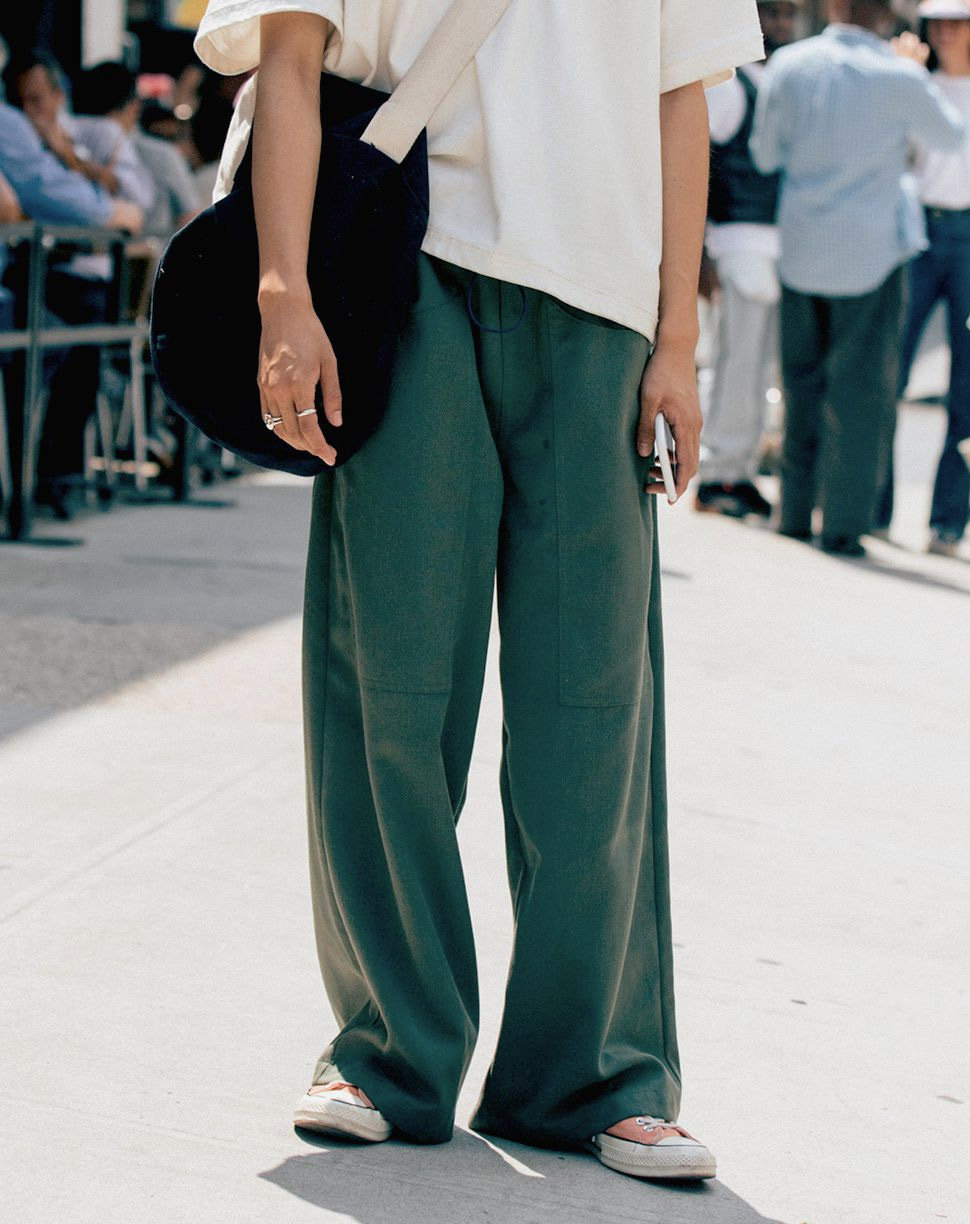 Speaking of widening your perspective, 2018 was the year the men's fashion industry completely reimagined what it means to be beautiful. For proof, just look to the most 2018 sneaker of all: the Balenciaga Triple S. The silhouette debuted in 2017, but it reached its zenith in 2018. You simply couldn't escape it. And for all that, it's pretty damn ugly. (We say this with love, but c'mon: You know it's true.) 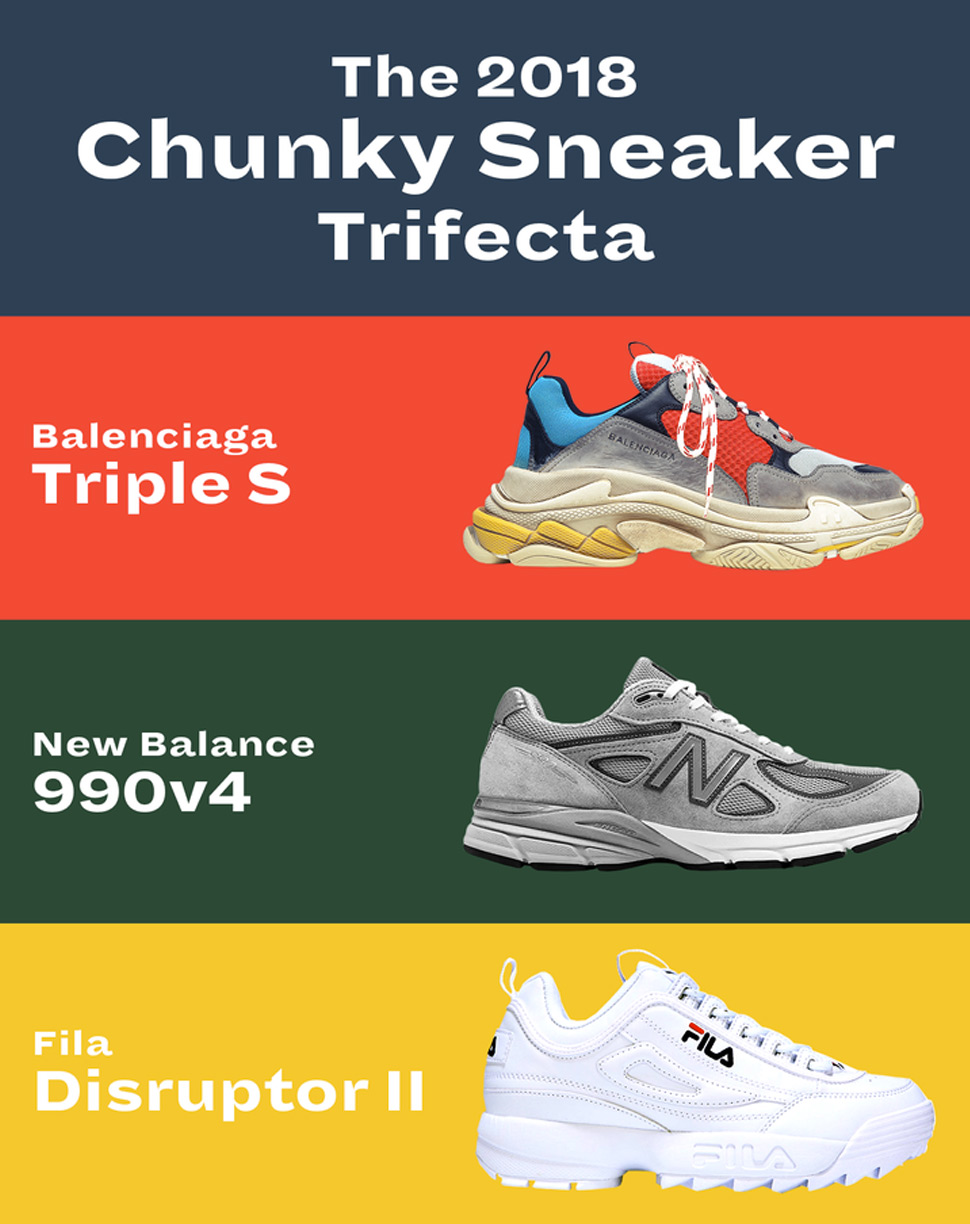 It was the quintessential dad shoe, except it wasn't. It was the hulked-out version of those basic trainers we remember from back in the day. But once it set a new frame of reference, there it was: Suddenly those actual dad shoes seemed genuinely cool. The New Balance 990v4 went from dog-walker essential to fashion-week must-have. Even Fila's throwback Disruptor II silhouette—more youth-oriented from the start, but taking cues from those chunky classics—became inescapable. Are any of these sneakers particularly handsome? Not in the traditional sense. But that's exactly the point.

We embraced the strange

There's no way to talk about 2018 without talking about The Summer of Sleaze. For a minute there, it seemed like dressing like a parking-lot weed dealer or a Boca Raton retiree was the only way to be an officially Cool Guy, especially among the celebrity set. Everyone from Justin Bieber to Jonah Hill was breaking out the bowling shirts, track pants, tie dye, and hotel slippers. 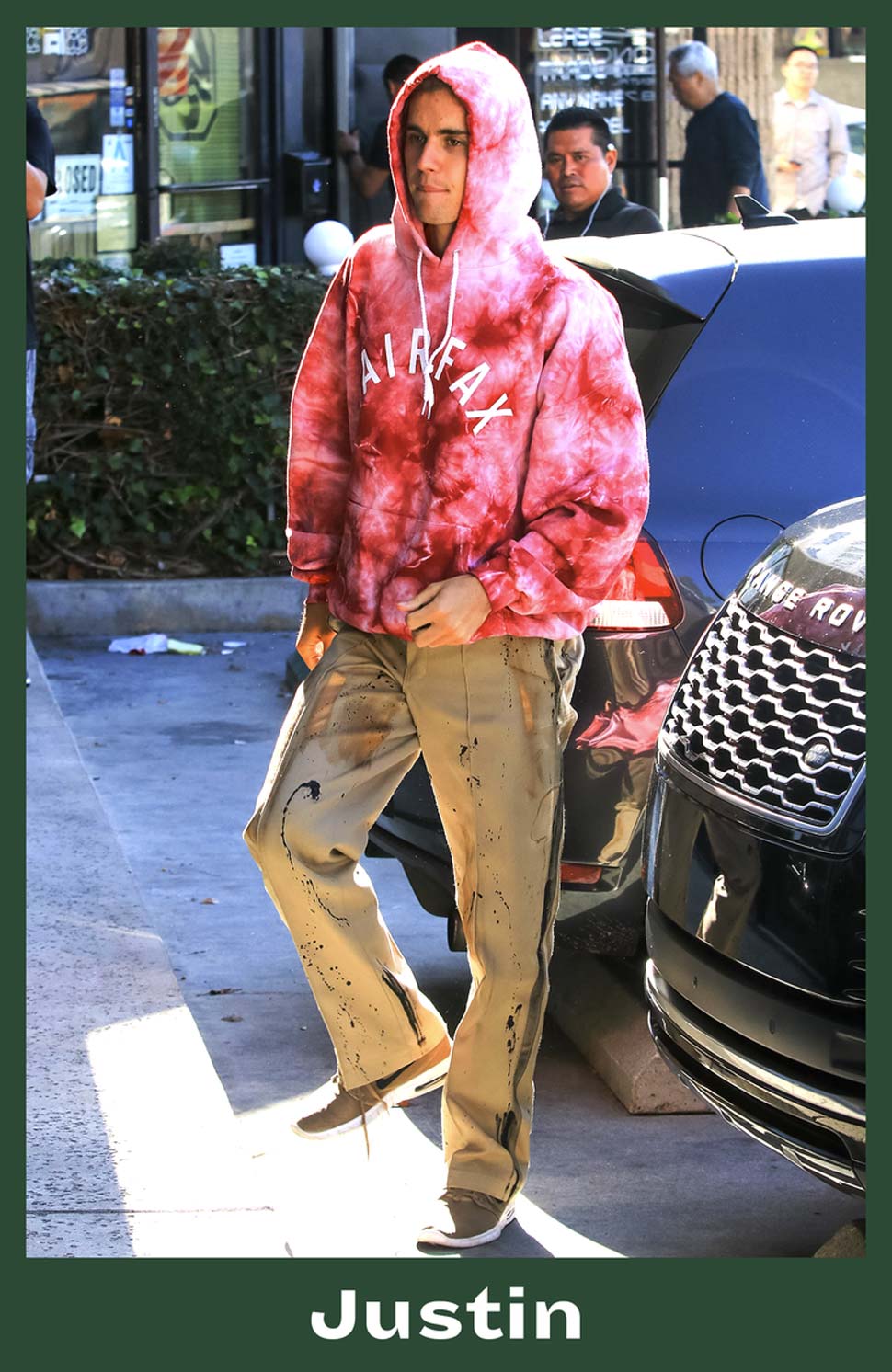 It was uncanny. And bizarre. And great, in its way. These guys weren't just dressing like slobs (though you'd be forgiven for assuming so). They were taking hyped labels and of-the-moment pieces—let's not forget how big track pants were in the last couple of years—and turning them on their heads. They were leaning into the weird, and it was working. Sure, it was more of a fashion flex for in-the-know types than it is a look for normal dudes to emulate, but even that is notable. For a minute there, dressing for a niche audience that recognizes even your most obscure references became a whole thing, and it did it on the main stage. And that's pretty damn cool.

We don't know exactly what's up next

Of course, The Summer of Sleaze had to come to an end. It's the nature of the fashion world (and, well, of seasons in general). Jonah has moved from his bowling shirts to sleek black pieces, many of which come courtesy of the Olsen sisters' pared-down, minimalist new menswear offering from their brand, The Row. He's done an about-face, but he looks great nonetheless. 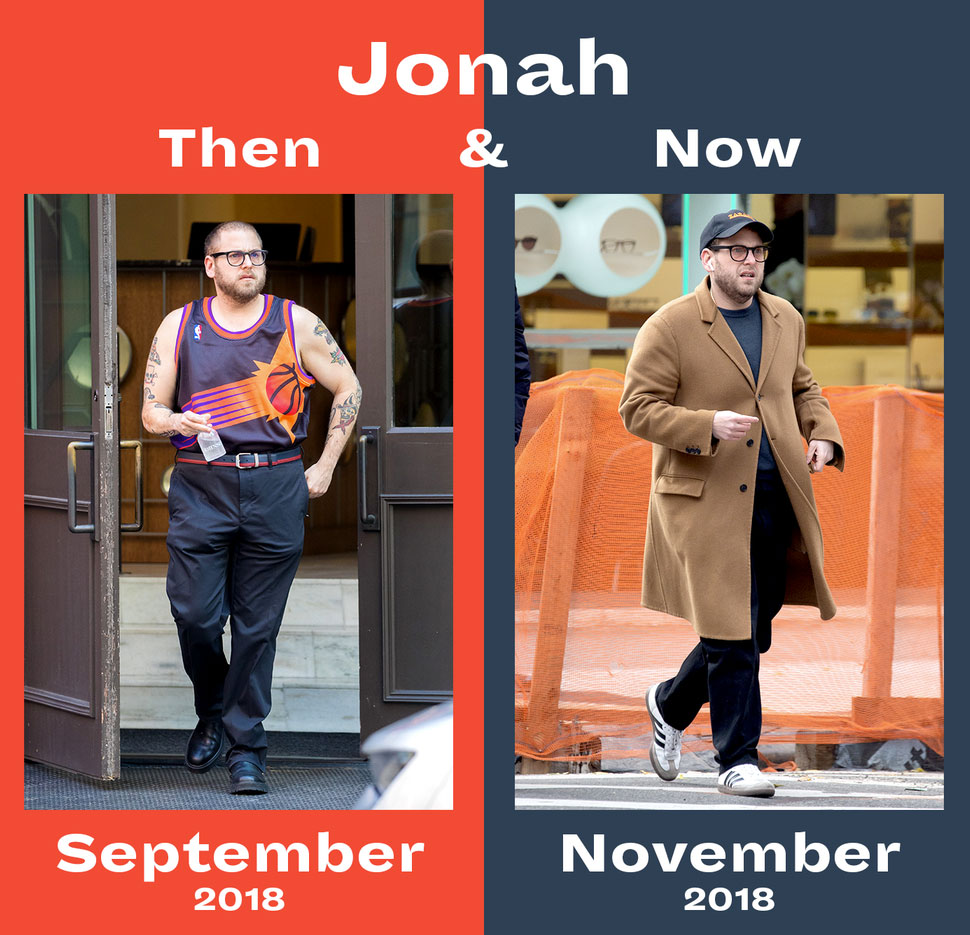 And Justin? Actually... Justin is still dressing like a sleazy weirdo when he makes an increasingly rare public appearance. And that right there is what makes looking forward to 2019 so fun at this moment in menswear history. It's the Wild West. For so long, guys who cared about getting a fit off were bound by a whole host of rules and dominant modes of dressing. Some rules still hold (please, for the love of god, everyone stop buttoning the bottom button of your suit jacket), but most are out the window.

And dominant modes of dressing? Well, you try to name one right now. We're well past the old days, when it was about a gray flannel suit for work and slacks on the weekend. Hell, we're well past the not-that-old days, when heritage jeans and Italian tailoring and #menswear were flying around the internet at top speed. We've taken all that—and a lot more, notably from the worlds of music (hip-hop) and self-aware internet culture (ironic shoes)—and turned it into something entirely different and unexplored.

What's next? Maybe a return to minimalism—or to the (well-documented) fashion excesses of the early aughts. Really, the answer to that question is up to you. And if you're someone who loves style, that's something that should get you excited. 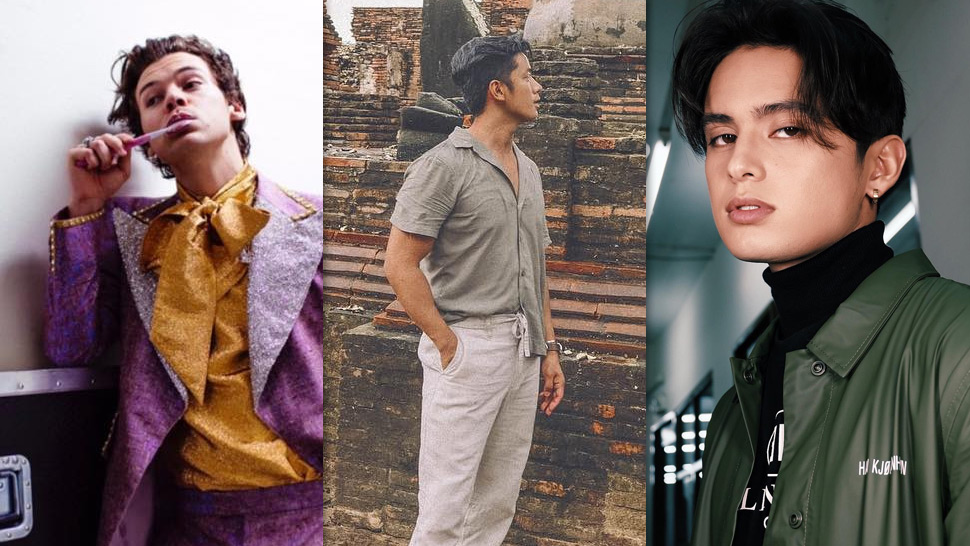 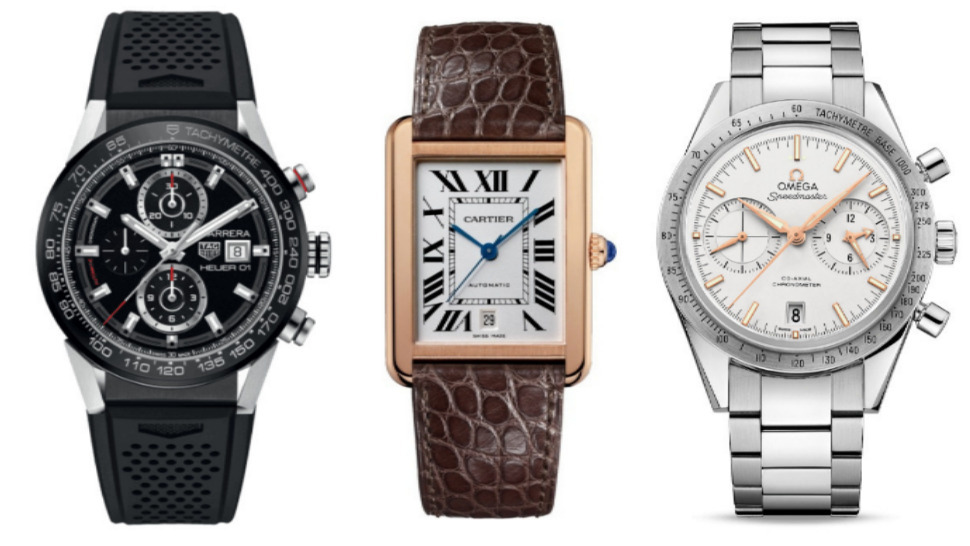 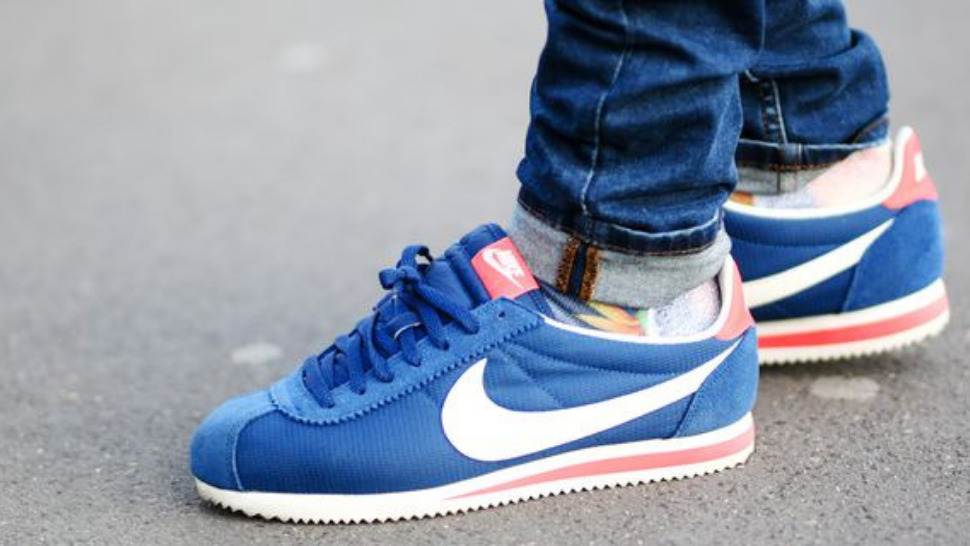