World-famous graphic designer Kenya Hara details how it influences the minimal design of the lifestyle brand. 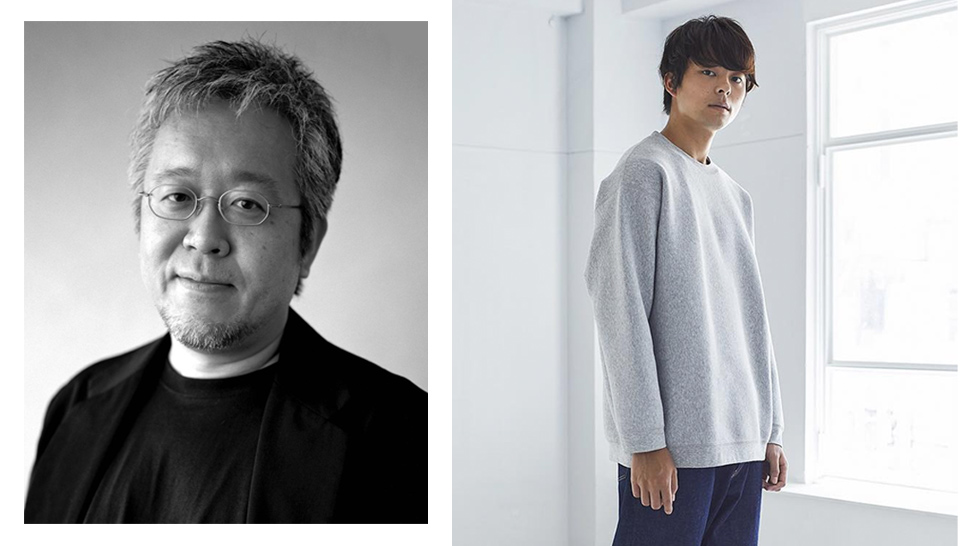 It's not something woefully lonely. Kenya Hara, the creative behind Japanese lifestyle company Muji, defines the idea of emptiness as something more appealing.

The graphic designer and curator, who is responsible for the art direction of the company, looks to emptiness as a space for imagination. To paraphrase a very old song: An empty chair is not, well, an empty chair when there's no one's sitting there.

You can actually use it as an unwieldy circus prop, a narrow bed (recruit more), or as the home for your pet turtle (in an aquarium, of course).

Hara also points out how the simplest things are complicated and not, as many people think, boring. 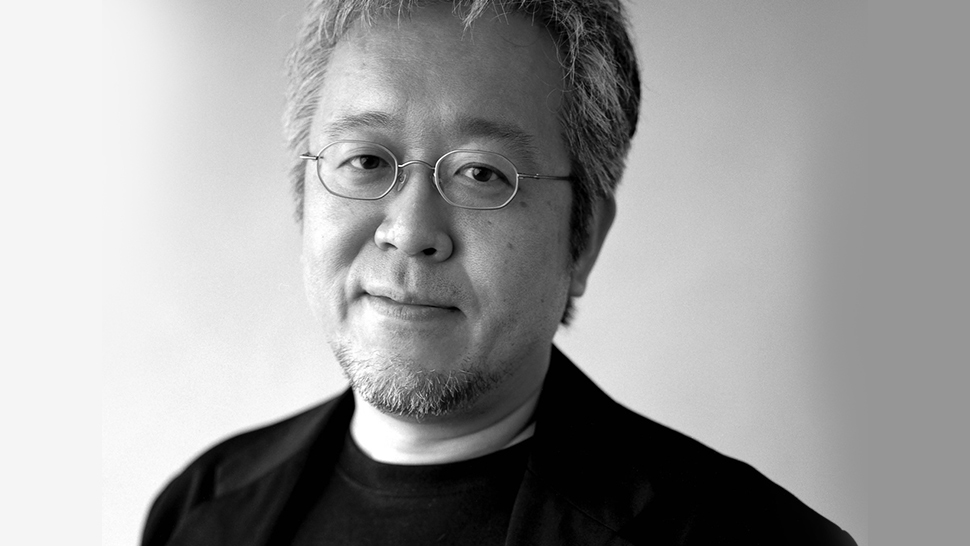 Kenya Hara, graphic designer, curator, and board member of Muji, is greatly influenced by the simplicity of Japanese design. IMAGE: courtesy of Muji

ADVERTISEMENT - CONTINUE READING BELOW
Created by Hara for Muji, the 'Galapagos' campaign shows the similarities between the the island's creatures and the company's products. IMAGE: courtesy of Muji

Hara also points out how the simplest things are complicated and not, as many people think, boring. Think of it this way: Imagine a bevy of condiments, from Sriracha to sweet mayo to mustard to vinegar. Now, make delicious water out of all of that.

“It's hard, right?” he says via an interpreter. “[Even in nature], it's not like [you] collect rainwater and drink it. It doesn’t work that way. That's Muji.”

On his recent trip to Manila, Hara sits down with Esquire to discuss more about the merits of emptiness, the importance of gravity, and a dream hotel in rural bliss.

Good design is invisible to the eye

Good design, for Hara, doesn't assert its presence. Think of what is considered cool nowadays—the never subtle stuff that calls attention. They excite the senses, but once you are made aware of their look-at-me designs, then these objects become not well-designed.

He offers another analogy as explanation: Among the bevy of beverages available today, from fizzy drinks to hard liquor, what do people appreciate the most? Water.

Empty is not simple

Hara points out how the concept of minimalism differs in the east and west. In Europe, design shifted from the ornate and toward simpler expressions that highlight form, function, and material at the close of the reign of kings, which was around 200 years ago.

In Japan, this idea took hold even earlier, during the 15th century, but the approach was different. The creative paints this picture: Imagine that nothing exists in a container. “There's so much potential in that nothingness, because now you will be able to imagine what you can place in the container,” he says.

Hara continues, “That's why we call it empty. When you say empty, [it means] nothing inside or it doesn’t exist. Sometimes people misunderstand emptiness as not being enough or something lacking. But that’s not it. It's just that nothing that exists.”

Emptiness is filled by the imagination

Hara brings up the artist Hasegawa Tohaku, the Japanese painter known for his beautiful folding screens. The artist would paint on just one spot in one of the panels and leave the rest empty. And when people viewed his panels, they were drawn to the empty spaces because these invited them to imagine what could be.

“I strongly believe that they express emptiness,” declares Hara. An object that is simple works well for one purpose, while an object that is empty can be used in different ways, in various situations, and by many users. The latter's use is defined by the user's imagination.

When Muji makes, say, a table, it doesn't say that the table is for a young couple who eats breakfast in their apartment. That oak table can be used by young and old, for eating or working, in kitchen or bedroom.

But that's not to say that the company strives to create objects that are empty. “We base our creation on that concept... It's just a way of thinking: how we are thinking and how you can perceive those items,” explains Hara.

Consider its face towel. Its made of organic cotton, comes in a solid color, absorbs water well, and just feels good to the skin. It is, when you think about it, enough. “It doesn't need anything else added to it,” he says. “That also expresses emptiness.” 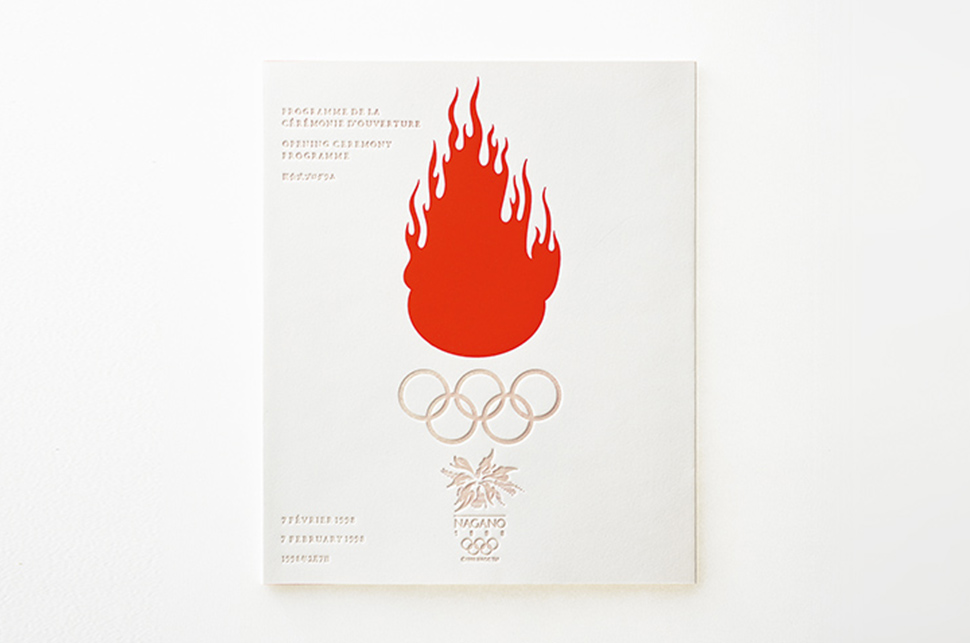 Hara's program cover for the opening and closing ceremonies of the Nagano Winter Olympic Games (1998) evokes snow and ice.

Kenya Hara creates his own gravity

In response to how the graphic designer sorts out the glut of stuff that surrounds us—most especially the noise that comes from social media plus the various circles that make up our lives, from family and friends to work and school—Hara describes this scene:

“There's gravity that exists in things,” he begins. Imagine floating in the universe and being pulled this way and that by the things you are attracted to. In the end, you are surrounded by objects that you like because of their gravity.

“It's so important that I have my own gravity, because I will just float without my own. I'll just end up sticking to things everywhere, and thats not how it should be,” he muses. “I should also have my own gravity so that I could also pull [things that I like to myself].” 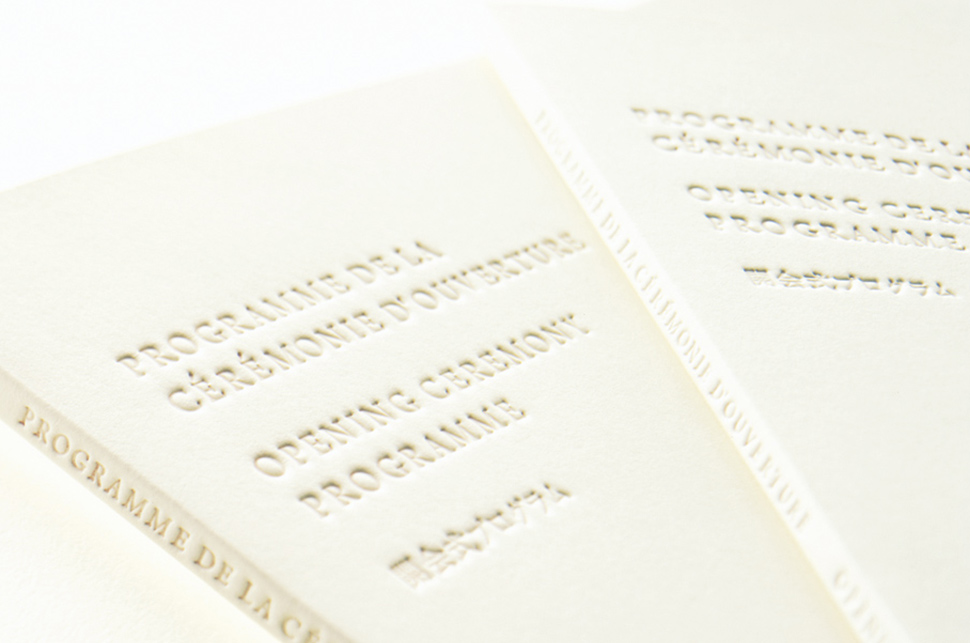 Hara included a special feature in the program's paper: When the paper is heated and pressed, it becomes translucent as if it were footprints in snow. IMAGE: courtesy of Muji

The creative soaks up design while traveling

If he has to identify one thing that he does outside of his work, Hara points to travel. But only because, while visiting different places, the graphic designer soaks up inspiration. “There's not one thing in the world that is not actually designed,” he points out.

When Hara sees a slice of bread, he wonders about its pattern. When he observes a sugar cube, he considers its beauty. When he looks at a plate, he admires how its angles were created. And when he sees pasta, he thinks about its shape.

Hara wants to build a rare and rural hotel

“To be honest, I want to create a hotel somewhere in a very rural area in Japan or maybe even around the world,” he says. “And that's something that I'm quite obsessed with. I want to experience that. It think it's going to be so fun.”

To note: Hara wants the hotel to be “rare,” and that's why he's looking to put it up outside the city. He's also relying on gravity to attract the right people who he can collaborate with for this dream project.

He's considering a hotel for work and play

Hara regards travel (and his future hotel) as not just a time for leisure. “Wherever I am in the world—an island in Jakarta, somewhere very comfortable and peaceful—I turn on my laptop and talk to my staff. I'm working on a break, and I'm on a break while working,” he says. “I'd rather have places where I can work and have fun and be at peace than to own something fancy.”

Kenya Hara and Muji think of what can be

“Muji exists for me in a very special way, because they make me think. Muji doesn’t say, 'Do this job now.' How they work with me is more like: 'Think of what's next.' And its very interesting for me.”

Many questions swirl in his mind: If Muji had a hotel, how would it manage it? If it was an airline, what kind of airplane would it have? If it was a travel agency, what would it do?

But to take the next step, the big question is always this: “What if and if so, what will?”

Right now, Hara is considering all these plus the ephemera happening in social media. And while, yes, there is pressure to define the very particular identity of a well-loved brand, he says: “It's also fun to have that responsibility.” 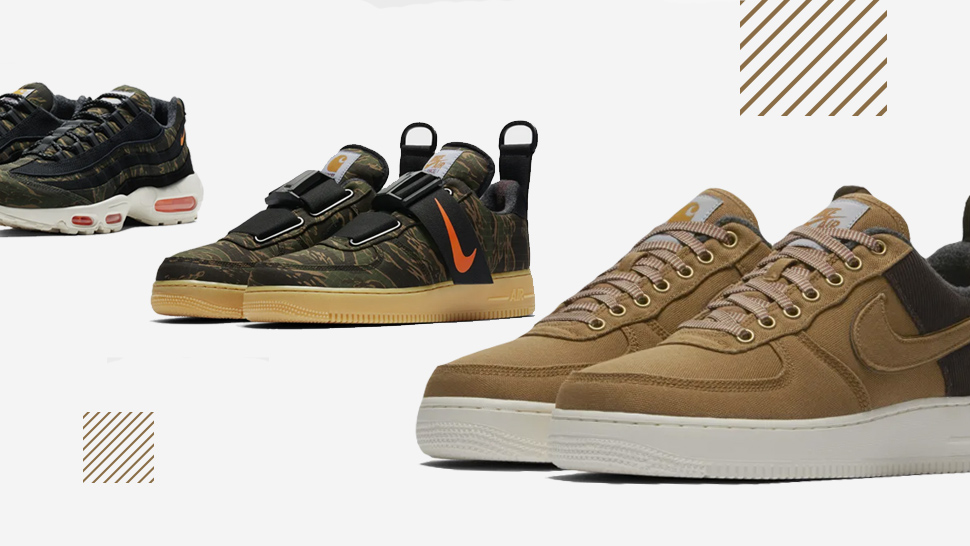 The Nike Carhartt WIP Collab is Not Afraid to Get Dirty 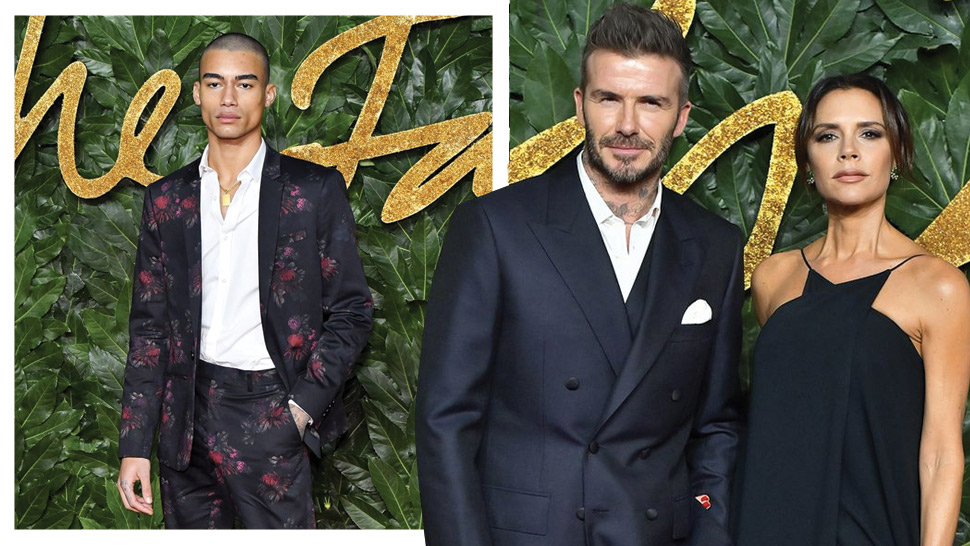