Here's What You Should Be Wearing Next Summer

All the upcoming trends from the menswears shows in London, Florence, Milan, and Paris 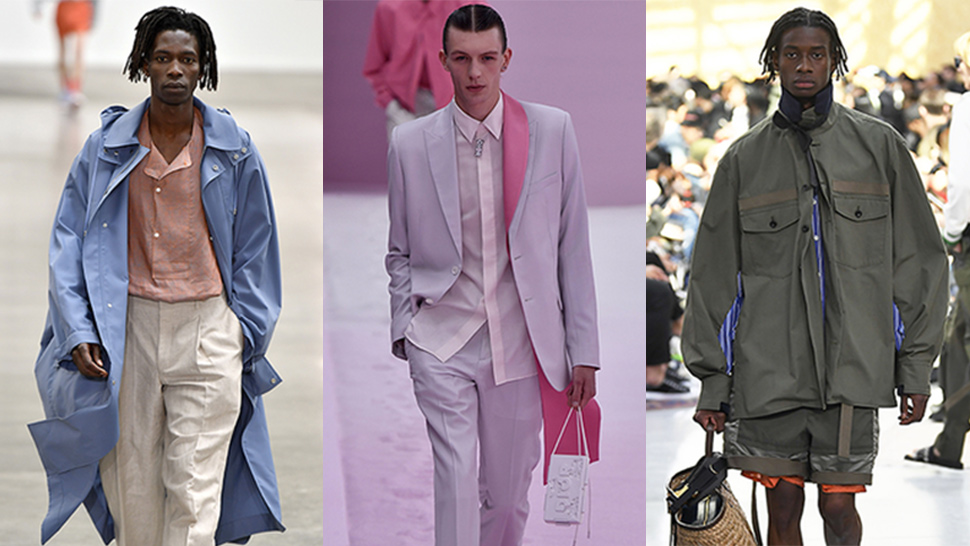 As far as we know, designers don’t conspire to create collective trends. And yet every six months at the established seasonal collections (or even more frequently and sporadically, now), motifs appear, commonalities materialize, and a vague style blueprint for the near future is laid out for all to study before the clothes go on sale in about eight months.

So what did we learn from the past month of menswear shows in London, Florence, Milan, and Paris? Well...

Remember when menswear was in the grip of ‘Millennial Pink’? the shade is set to reappear next summer, but this time accompanied by equally blissed-out blues and greens and yellows. It began with Prada, who showed in Shanghai the week before London, and was continued by E Tautz, which incidentally was one of the best shows of the whole weekend. (Patrick Grant told me he was “moving the brand forward by taking it back 35 years.”)

It was awash with soft '80s color—the show notes pre-empted the collection as ‘fruity and floral’—but it wasn’t garish. That’s the key to this trend. You can layer up sugary pastels to your heart's content, as demonstrated by the first 20 looks at Louis Vuitton in Paris. But this is not about , it’s about summer subtlety.

The vibe rolled on at Dior, where Kim Jones set his show on a pale pink beach, surrounded by violet, gem-set sculptures by artist Daniel Arsham. And then at Lanvin, where Bruno Sialelli’s first collection of menswear for the brand was littered with light colors, and Ralph Lauren, where the pastel-ness was turned up full whack into totally tonal ensembles. In fact, there was barely a single show that didn’t take some inspiration from a bag of Flumps.

As I was reliably informed at the Canali presentation, a small scarf worn around the neck is known in Italy as a ‘strangolini.’ Scary as that sounds, neckerchief-type adornments popped up all over the place. Aside from being the necks of loads of actual show-goers, they were used at Giorgio Armani, Prada, Givenchy, and Hermès, with the latter being the best expression.

It seems like the conflation of a few , to me. One being a workwear-y, almost Victorian vibe (think Burt from Mary Poppins), another being a mid-century, continental insouciance, as epitomized by Alain Delon, Dickie Greenleaf, Marcello Mastroianni . And the last being those snake-hipped rock stars of old. Steven Tyler, Mick Jagger et al. Whichever appeals most (one of them, surely), there’s a ‘chief for you.

3 | Gardening will be cool

The Fendi show in the gardens of Milan’s Villa Reale was tranquil and bucolic. Guests—shown to their sun-dappled wicker seats by lads in khaki coveralls—sat in peace and quiet as models in more complicated coveralls, floppy hats, and gardening gloves crunched past on the gravel path. Some even carried bags that mimicked those baskets people use to collect fruit. Nature, flora, and the simple pleasures of the outdoors were a common motif throughout the shows.

There were similar gloves at Louis Vuitton, and Abloh even took to coating his now famous harnesses in fresh flowers, as well as lacing the whole collection with delicate floral prints. The bloom continued at Off-White, his other clothing venture, where models paraded through a white pillowy meadow, and the floppy garden hats were at Sacai, too. Even Hedi Slimane at Celine, with all the brand’s thunder and static, found time to send wicker bags down the runway.

4 | Your summer suit should be brown

Last season we collectively announced that tailoring was back, and it is. Or at least it will be when the autumn/winter ’19 collections go on sale in about two months. But few would have expected that in its second season home, suiting would have been cast in the riskiest : brown.

But it looked good. Unsurprisingly, Milan was where it popped up most. Ermenegildo Zegna, Brunello Cucinelli, Canali, Corneliani—all the houses best for their masterful tailoring and fine fabrics dabbled in various shades of brown, which is best worn casual and textural—anything too stiff and structured will just look stuffy—and with the continued abundance of soft shoulders and wide trousers, it’s no wonder it was so prevalent. The best, I think, was at Zegna and Corneliani. Both cut their brown blazers with volume a one-and-half-breasted fastening (between single and double) and the latter was even designed to be worn open. For those with less Neapolitan tastes, Band of Outsiders has a very cool, very easy single-breasted brown number.

*But there was still a fair bit of black tailoring, which is perhaps what you should invest in to see you through to 2020. Everyone seemed to offset all the color with at least one simple two-piece suit in black. The best might have been at Dunhill’s excellently dramatic collection in Paris, but Christoffer Lundman’s mastery of slim statement suiting at Tiger of Sweden deserves to be discussed, too.

Throughout the whole season, there was scarcely a model that didn’t have some leather good in his hand, or more likely, strapped across the front of his body. Bum-bags-as-body-bags have been a thing for some time now, but it might have been Dior’s ‘Saddle’ bag that legitimized the style in terms of luxury fashion. At the show, there was barely a guest without one (and fair enough, they’re just so damn natty), but it seems that everyone else has caught up and is offering their own take on a bag that’s big enough for your phone, but not your computer.

Beyond Dior (who showed a new collaboration with hard case company, Rimowa), the best by Valentino (bold prints made in collaboration with '80s album artwork designer Roger Dean), Byredo, where the fragrance company launched its collection of ‘ByProducts’ (which included a brown suit) and Ermenegildo Zegna and Fendi, who both created belt-bags that are designed to be worn on the hip, or even on the front. Like an actual bum bag. We’ve come full circle.

The magic of a fashion show is that it has the potential to be so much more than just an exhibition of new clothes. It can be—as the more excitable members of the fashion pack say—‘a moment.’ We had a couple of moments last summer with the LVMH-derby of Kim Jones (Dior) vs Virgil Abloh (Louis Vuitton), and January hosted a serious moment when Hedi Slimane, newly appointed at Celine, showed the house’s first ever men’s collection.

The S/S20 rotation offered up little in the way of moments, but it was jammed with big, brash shows nonetheless. During Florence’s Pitti Uomo, Ferragamo commandeered the Piazza Della Signoria and constructed a runway in the shadow of Michelangelo’s David (or the replica, at least), while Clare Waight Keller invited everyone to an achingly beautiful palace in the hills for her first full menswear show at Givenchy. The sun was setting and the spritz was flowing and when the clothes were gone people until a confetti canon heralded an inevitable descent to the city below.

The Versace show in Milan was characteristically bombastic: Prodigy’s Firestarter blared as the models stomped around great mountains of pink flowers (more flowers) and a rotating car modeled on Back To The Future’s Delorean, and Zegna went all Burning Man with its setting of a dystopian disused iron mill on the edge of the city. In Paris, Virgil Abloh cordoned off a square on the Right Bank and served crepes, ice cream, and champagne to guests at carefully arranged café tables along the runway. (I might have nicked an LV branded ashtray, I definitely wasn’t the only one.)

Do shows need to be such vast productions? Probably not. Does it occasionally mask over what is ultimately an underwhelming collection? Yes. But not only is fashion about sex and and aspiration and drama, but it’s about Instagram engagement, too. And nothing gets the like button popping like a Louis Vuitton crepe stand. 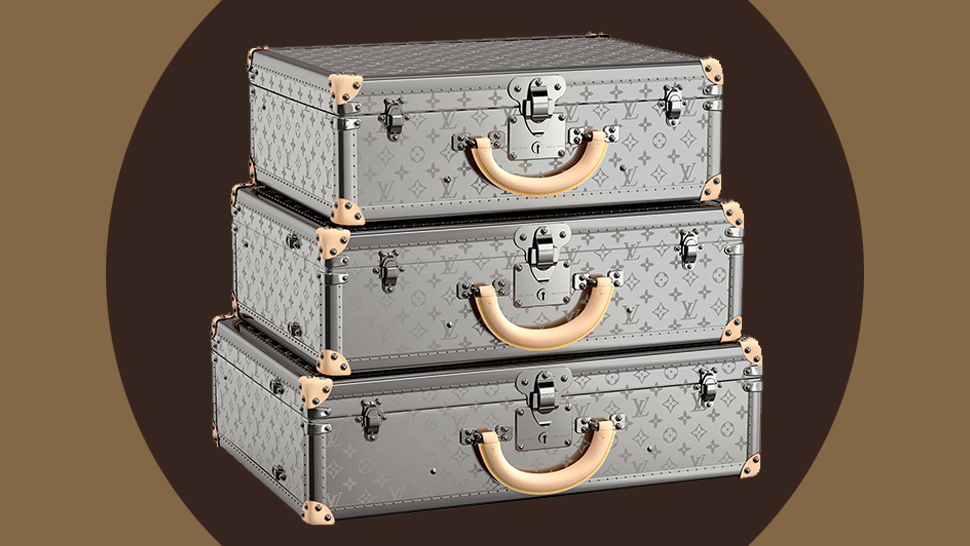 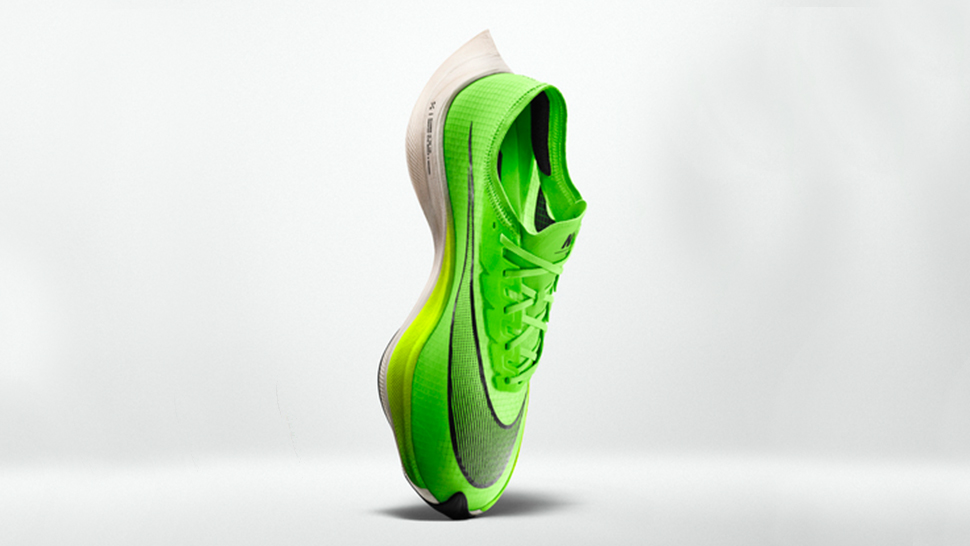