A closer look at the pairing between the Swiss watchmaker and the street artist. 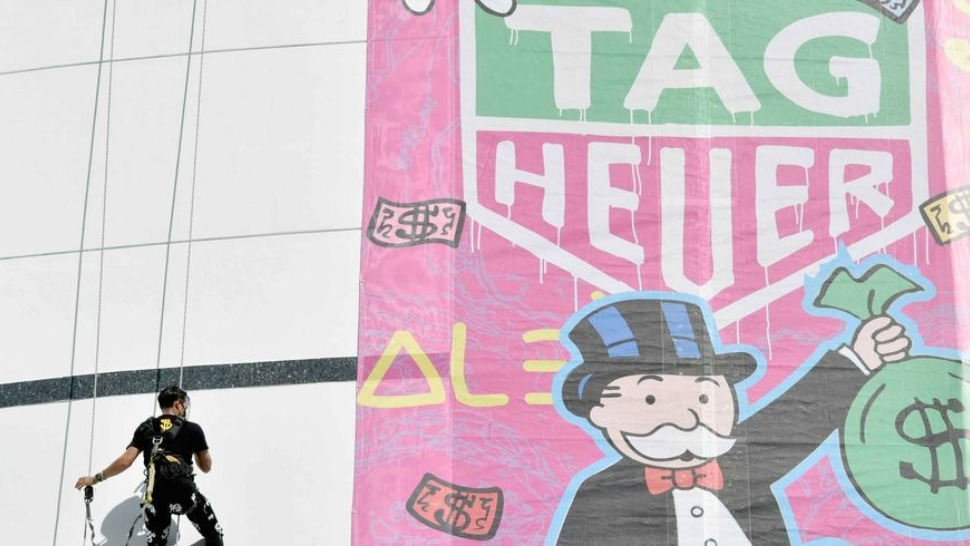 Art Basel Miami is nothing if not an all-out assault on the senses. There is the balmy tropical weather—in December. There’s the excessive display of (very tan) skin. There are the thumping dance parties, the wild art installations, the über-exclusive celebrity-saturated brand events. And then, of course, there’s the sea of Gucci slides, Off-White strap belts, and every other eye-popping trend under the (in this case literal) sun. Long story short, it’s a lot to pay attention to. But one of the more interesting events this season was the iconic Swiss watchmaker Tag Heuer’s collaboration with L.A. guerrilla artist Alec Monopoly. 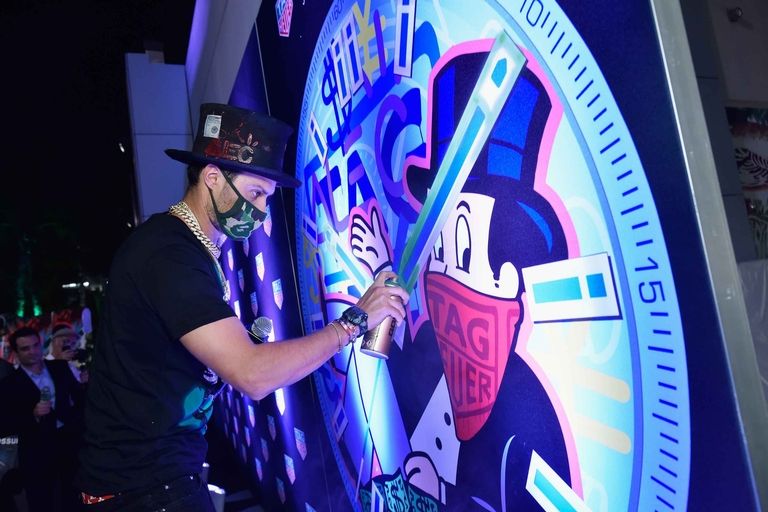 For those unfamiliar with Alec Monopoly’s work, he’s best known for his murals, gallery installations, and street art featuring the top-hatted and mustachioed banker from the Hasbro classic, Monopoly. Hence the moniker. The artist is also known for wearing a top hat himself, and for keeping his face hidden in order to maintain his anonymity. Since 2008, when the world economy teetered on the brink of collapse, Monopoly (born Alec Andon) has used his art to take digs at Wall Street, and to highlight the follies of the financial world. His Mr. Monopoly character has been depicted in practically every conceivable situation, and always in a blast of vibrant color. As for how he came to partner with one of the world’s foremost Swiss watch companies, that all happened thanks to a fortuitous encounter in the south of France. 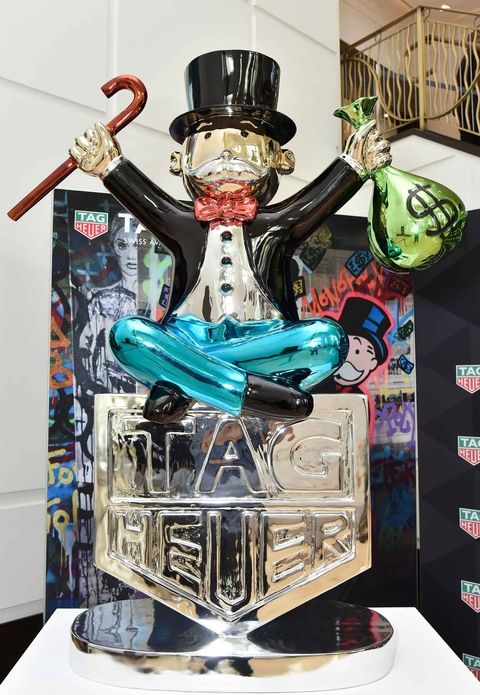 “I was in the south of France working in my studio at [designer] Philipp Plein’s house when Mr. Biver [Jean-Claude Biver, CEO of Tag Heuer] came over,” says Monopoly. “He has a house there, and he came over, and we just ended up talking about art. And then we spoke about doing a collaboration.” Monopoly was impressed not only with Biver’s insight into the watch world—a world that he’s been a fan of since he was young—but also his deep knowledge of art, technology, and culture. “This guy is brilliant. He’s like the Steve Jobs of the watch world,” he says.

For Tag, the collaboration was a chance to expand its presence in the art world. The company, after all, takes pride in its ability to maintain ties not simply in the luxury sector, but also to sports, art, and entertainment. And while athletes and celebrities get the bulk of the promotional face-time in terms of brand visibility, Tag likes to cultivate a roster of artists as well. For Monopoly, that means a series of Tag Heuer-sponsored installations, not to mention an official title within the company: Art Provocateur. “I’m in a 360-degree partnership with Tag Heuer,” says Monopoly of their work together. “I’m a brand ambassador, an art director, and an artist. It’s like we’re married.” 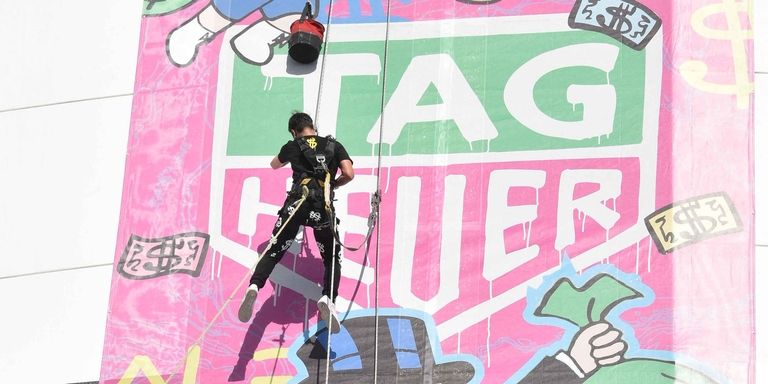 For this year’s festivities at Art Basel Miami, Monopoly created multiple installations. The first involved a series of 300 limited-edition watch straps for the Connected Modular 45 that Monopoly spray-painted during a cocktail party at Tag’s Miami Design District boutique. And then, on Thursday, for his coup de grace, Monopoly scaled a 40-foot wall at the front of the Fontainebleau Hotel to paint a giant mural featuring the Tag Heuer logo alongside his namesake character. The stunt was all in support of TAG’s current Connected watch campaign, entitled “Don’t Crack Under Pressure.” And not plummeting four stories to his ultimate demise seems an apt test of that tagline.

As to the blending of the art world and the watch world, Monopoly sees it as a natural confluence. “They go hand-in-hand, because people who appreciate fine watches are at a level of sophistication where they can appreciate art as well.” 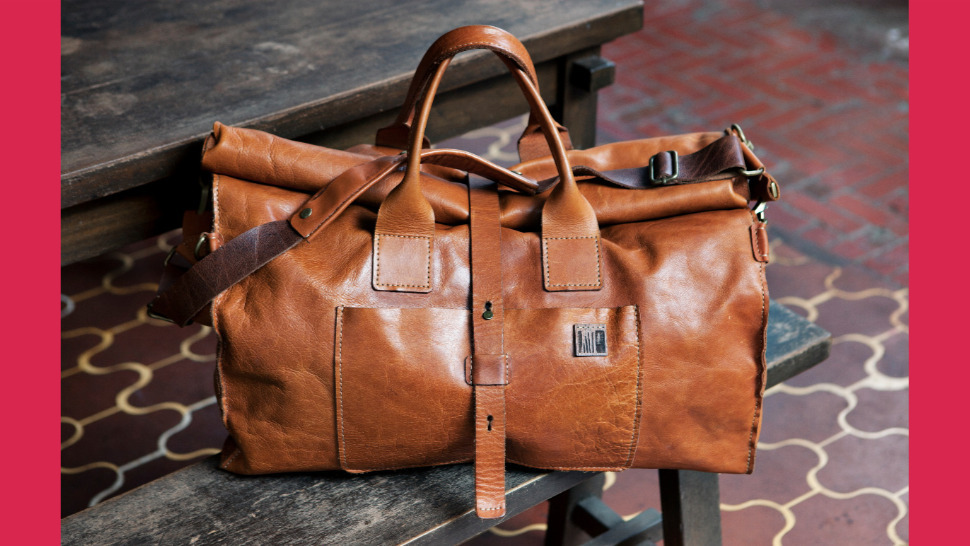 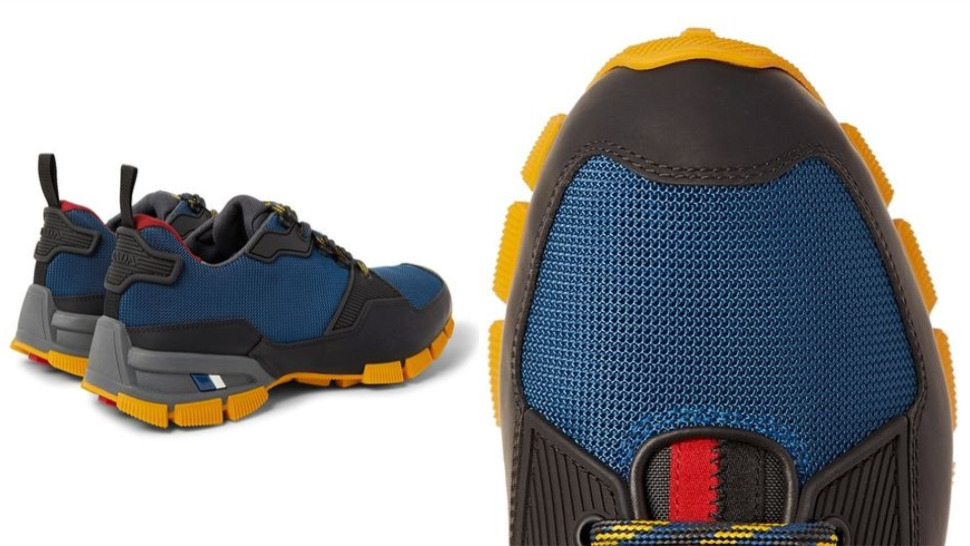 The Ugly Sneaker Trend Is Here. But Will It Last?
All Photos
Comments
View As List