The history behind one of menswear's most enduring essentials. 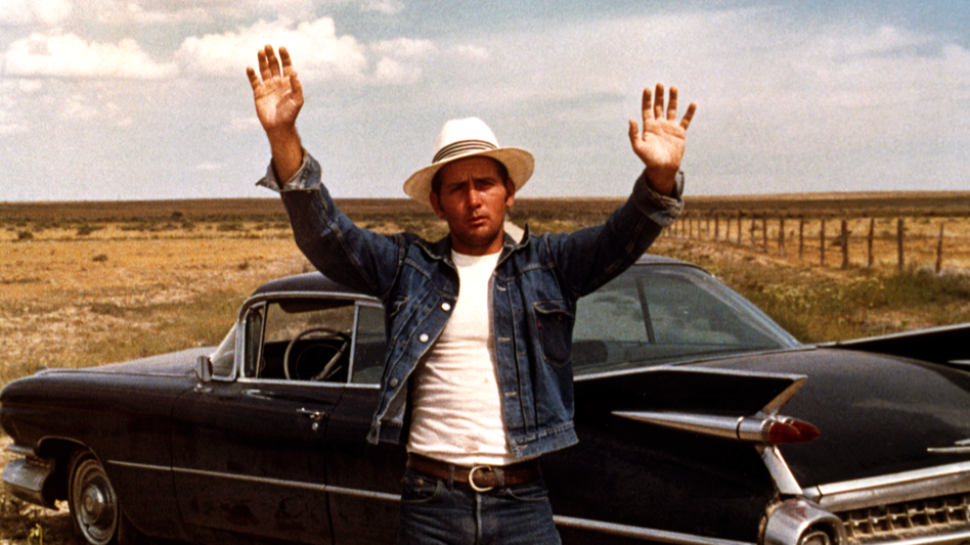 Has anyone ever looked cooler than Martin Sheen in Badlands? Kit Carruthers, the protagonist of Terrence Malick’s 1973 debut, is as bad, mad, and easy on the eye as they come. He has the hair, James-Deanish and dusty in the South Dakotan haze; the hips, narrow and snugly wrapped in blue jeans; and the hand-eye coordination of an Olympic athlete. (That he uses it to gun down hapless cops is by the by.) He also has the denim jacket to beat all denim jackets — and that’s saying something.

They were big in the Fifties, when the film is set, and they were big when it came out, too. Denim jackets were hip in the Sixties, Eighties, and Nineties, as well, and, would you believe it, they’re hip once again?

Before WWII, denim jackets were worn for their actual toughness, rather than any outward toughness. The first was Levi Strauss’s 506, or Type 1, a natural evolution of the denim jeans the businessman had developed in partnership with tailor Jacob W Davis in the late 1800s. It featured a single breast pocket and a cinch buckle on the back and, like the jeans, was designed to resist the rigors of manual labor.

“In the vintage world, the holy grail of denim jackets is probably still the Levi model 1 (506) and model 2 (517),” says Graham Cassie of the iconic vintage store, Cassie Mercantile. “Although some of the high-end collectors prefer Stifel, which is an American 19th-and 20th-century workwear brand.”

By the mid-century, pop culture had defined the denim jacket as the de facto uniform of the American tough guy. Silver screen cowboys and greasers, such as Carruthers, had adopted it, then the hippies followed suit, as did the punks, and by the Nineties, the oversized denim jacket was a mainstay of hip-hop culture, too.

“I think it is such a familiar item to most men that there is a certain resilience in its ubiquity,” says Damien Paul, head of menswear at Matches Fashion. “This is an area where we can see men are willing to experiment a little.” And it’s lucky that we are, because if the humble DJ has been in one of its cyclic troughs for the past few years — in the halls of high fashion, at least — it is certainly peaking once again in this summer of 2020.

As part of the trend for all things Seventies, sleazy, and Stephen Stills-y, denim jackets are in, and have been reinterpreted in umpteen guises by designers across the spectrum. At Gucci, Alessandro Michele used denim in a field jacket that echoed the patchwork aesthetic of Junya Watanabe who, as per usual, wielded denim to great effect in his own collection, a combined DJ and car coat being the best of the lot. The patchwork continued at Universal Works, Sacai, Atelier & Repairs, and Loewe.

Other brands chose to see the denim jacket as more of a canvas. Casablanca — very hot right now indeed — prints its simple DJs with Baroque and Deco motifs, so one can resemble a matador, or country club bathroom suite, should one desire. Casablanca’s best, though, is the Speed Boat Club jacket, which is printed with a seascape replete with breaking waves, seabirds, flying fish, and the setting sun. 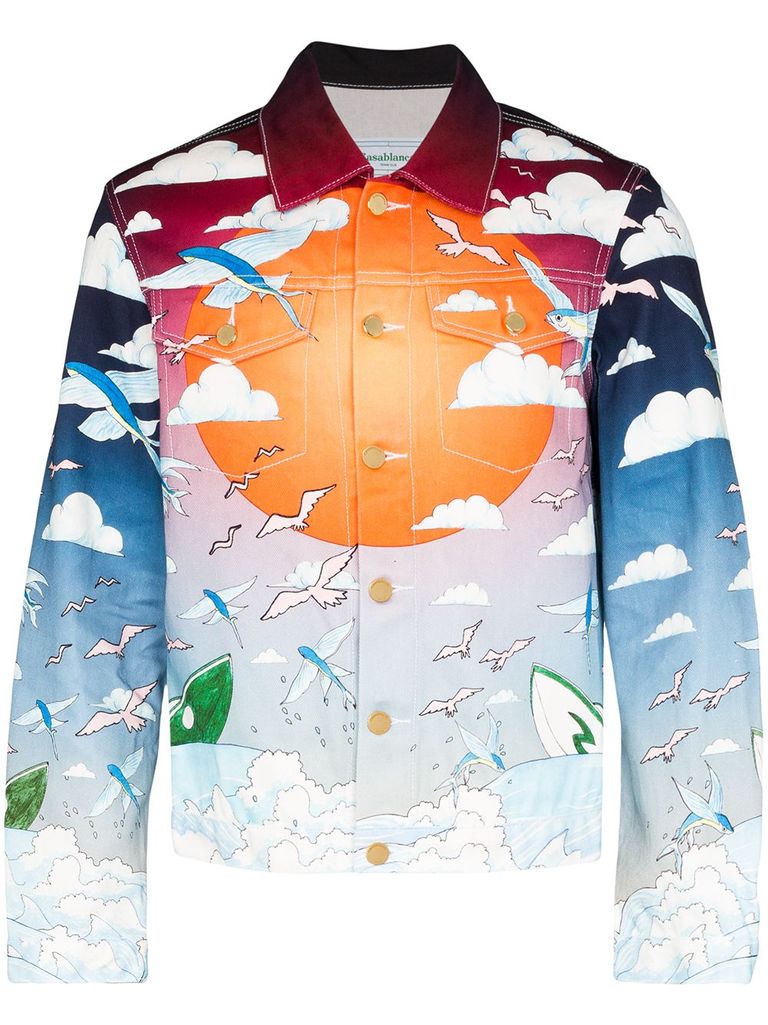 As part of its washed-out spring/summer 2020 collection, Louis Vuitton created a near-transparent, pastel-colored edition of the denim jacket in layered tulle fabric (it uses no denim at all but thanks to its shape is still a “denim jacket”). Engineered Garments took to embroidering its denim chore jacket with intricate flowers, and California’s Mother Denim implemented tie-dye, a motif that repeats at Levi’s Made & Crafted, Off-White, The ElderStatesman and A Cold Wall*.

At The Kooples, Celine and Saint Laurent— three European brands pulling in the direction of cigarette-thin, rock ’n’ roll ennui —the jackets are suitably louche, beaten-up and short in the body: succor to those who associate denim jackets with music and debauchery.

And classicists will be pleased to hear that the traditional, blue, gently tattered denim jack-et is also having a moment. At Reiss, the Americana capsule collection illustrates that greaser style is alive and well and available for an exceptionally democratic price. And those that prefer their Fifties biker style elevated, luxuriated and sexified may point their credit cards in the direction of Tom Ford, Visvim, Brunello Cucinelli, and Jacob Cohen. Too good for Carruthers, but not too good for you. 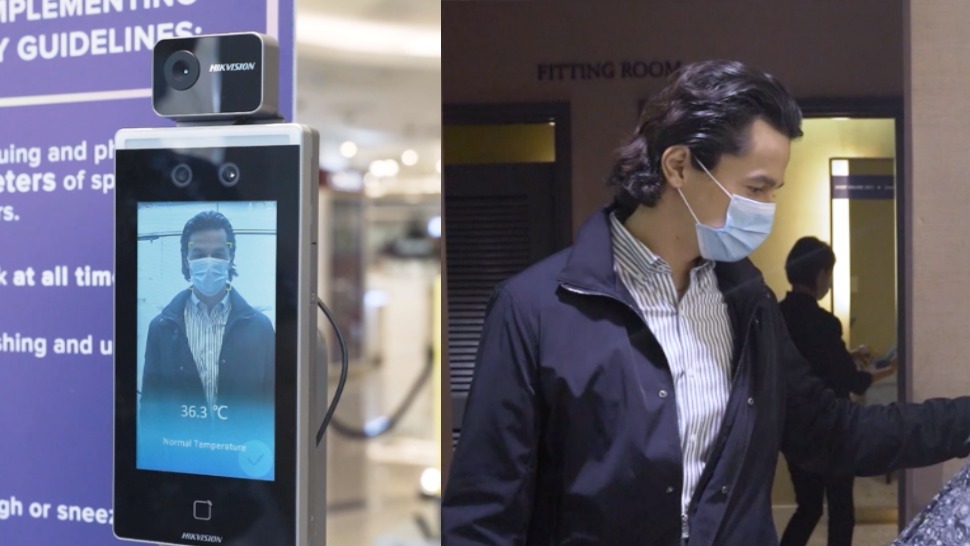 Is It Safe to Return to the Shops? 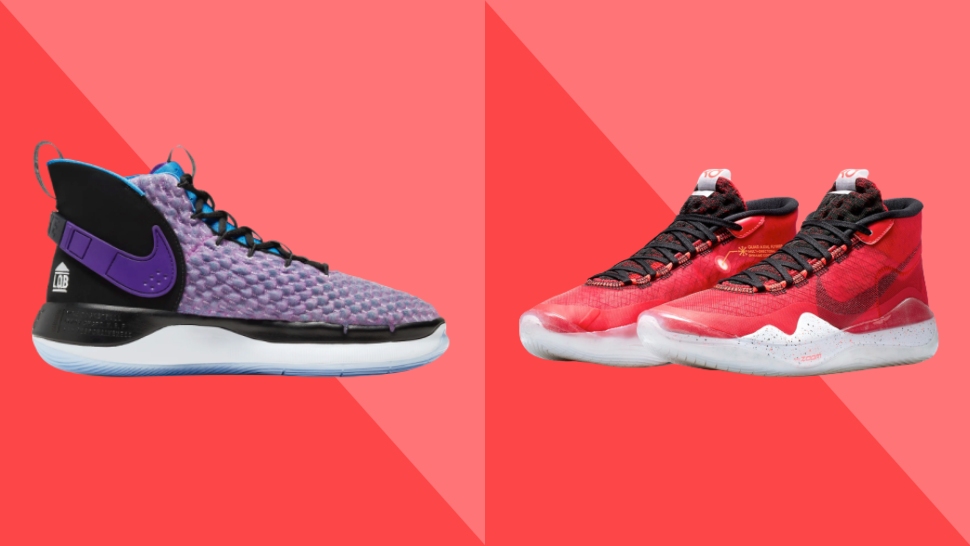 The Nike Outlet Store Is Back With Another Sale, And It Features 50% Off Sneakers
All Photos
Comments
View As List