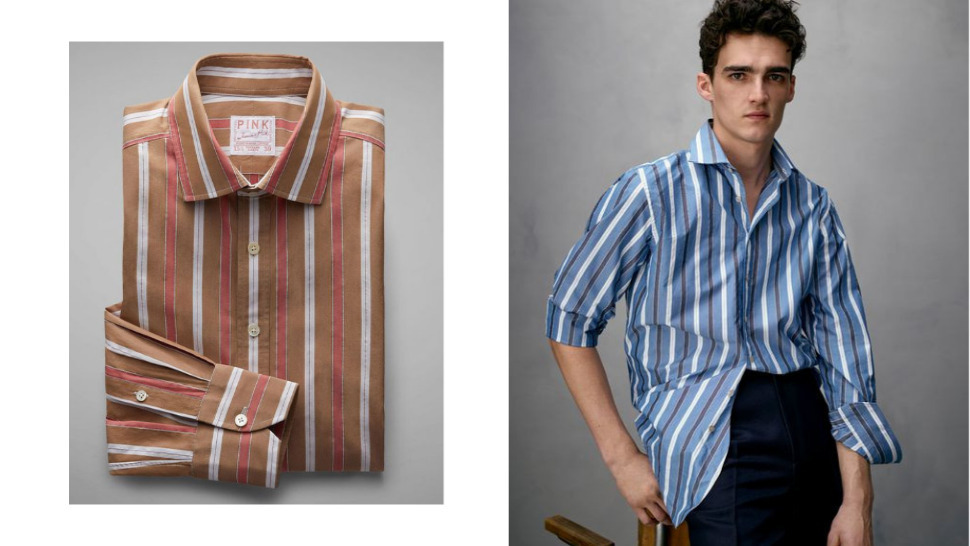 It used to be a peculiarly Brit thing, with dress shirts and ties—back, you know, when we actually wore shirts and ties—that your shirt that was the conversation piece while the tie, knotted wonky and four-in-hand, offered a sober counterweight as inky dark as your suit. This was a style statement only made possible by the eye-popping patterns of the more illustrious of Jermyn Street’s posher shirtmakers, just the stuff that made Daisy Buchanan weep in The Great Gatsby.

Tastes, however, come and go. By the 1980s, only the sartorial self-starter—or the Wall Street shark—would make a beeline for those horizontal candy stripes or bouncing checks. When it launched in 1984, British shirt brand Thomas Pink deliberately bucked the sobering trend and made color its unique selling proposition. It quickly earned a reputation, in the booming financial markets in the City of London and across the business world, for dress shirts with attitude that appealed to young thrusters who didn’t much care for the sensible old shirts most of their bosses wore. 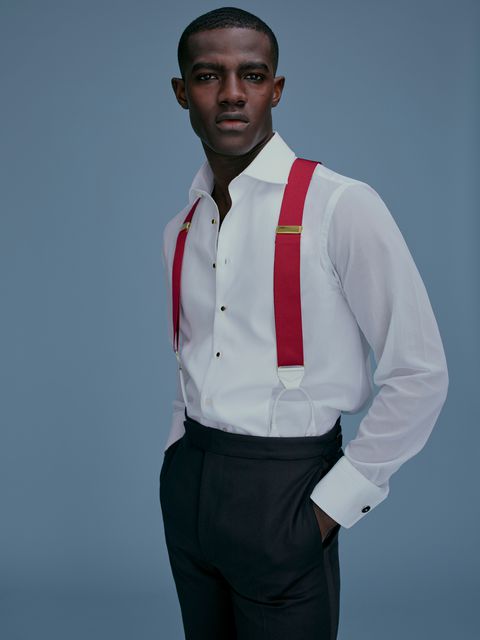 Fashion is nothing but cycles. After the boom years, and in step with our slowly waning enthusiasm for wearing a shirt and tie to work, Thomas Pink lost ground; quality dipped. For those men who considered wearing a tie a daily chore, its demise was greeted with relief. You’d be hard pressed now to find even a single guy wearing a dress shirt in your local bar, let alone a tie.

So, somewhat counterintuitively, wearing a tie is arguably evolving into a quiet act of rebellion. It suggests—and there are other signs pointing in the same direction—that a new fashion phase may well be on the up, one that may forestall (if not actually reverse) the general drift to casual everything. And a newly invigorated Thomas Pink will be well placed to meet it.

A new creative team led by Scottish-born designer John Ray began the process of rethinking the brand—under LVMH ownership since 1997—just last year. November 15 is D-Day for Ray, when a painstakingly rethought collection is first launched in Pink stores and online with a bold new identity. In the packaging, labeling, in the brand imagery, nothing has been left as it was. Even the name has been changed to Pink Shirtmaker London, ditching the "Thomas"—an 18th Century tailor who famously made hunting clothes and inspired the brand and who may or may not, in fact, ever have existed. 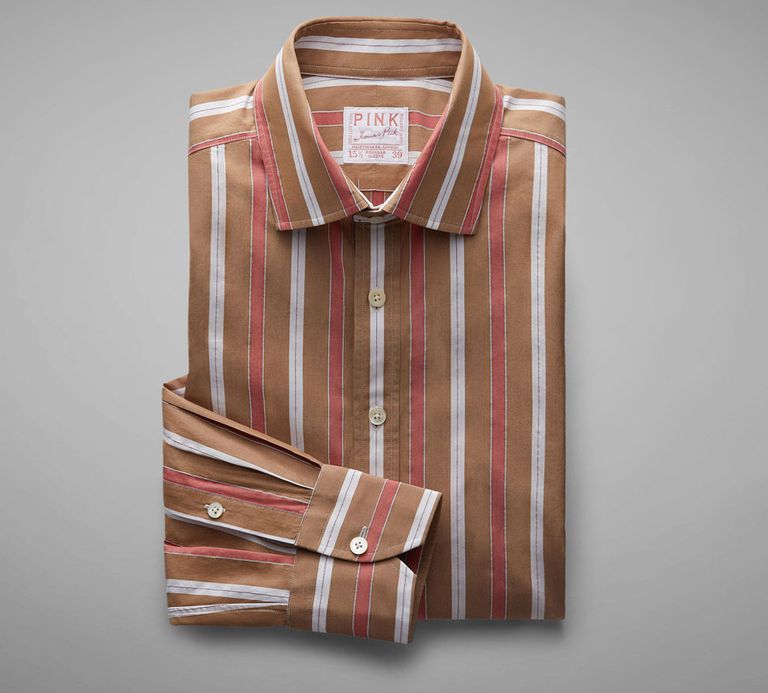 The new Pink identity rediscovers the playfulness of the original company, strips away much of the accumulated stodge, but also returns to some of the hallmarks of serious shirtmaking. Central to the company’s rebrand is the conviction that today’s customer wants and expects something altogether different from their clothes than they, or perhaps their fathers, did 20 years ago.

In reinventing Pink, Ray, a veteran head designer of both Gucci and Dunhill, envisaged the line from the perspective of young men now. With his experience in both high fashion and classic menswear, he has the knack for combining a purist’s devotion to the right construction with a fashion designer’s innate sense of change. Much of Ray’s interest in Pink is about playing with that delicate balancing act between tradition and modernity. 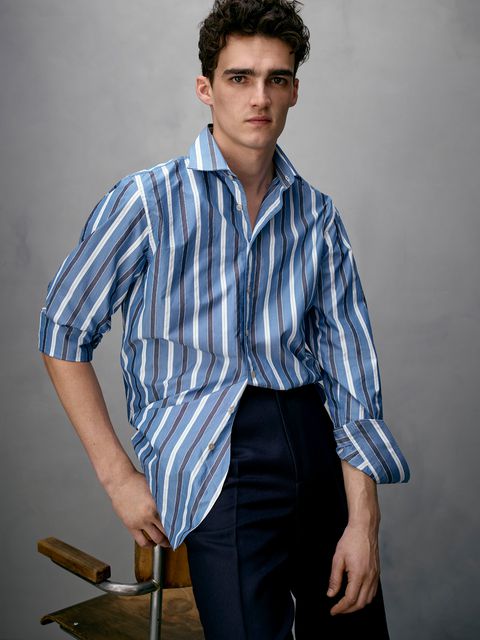 “I’ve become obsessed with getting the balance right,” he says. “There’s an odd chemistry, in British style, between the shirt and the tie that’s not as easy to get as it looks—there’s both a quirkiness and a restraint there. When somebody gets that right, the balance its quite exciting to look at.”

The outcome of Ray’s efforts is neither trad nor fad. It’s colorful patterned shirts in cottons from some of the best Italian mills. It also means shirts that have been washed just enough to give them the patina of a much-worn favorite, which means they look as good with a jeans and a pair of sneakers as they do with a wonky four-in-hand knot.

Tailored pieces and overcoats, knitwear and cords—all with that slightly vintage vibe, but without the stiffness—reinforce the mood. Everything is different, more wearable, if you have the attitude; but think of this as in any way a retro collection and you rather miss the point. This is forwards.

“The whole thing is softer rather than being stuffy,” says Ray. “There’s something really charming about old clothes, because they have been broken in, handed down; it’s something I definitely wanted to get out of the clothes. If you wash a well-made shirt, it gets brighter and silkier. Everything we’re doing has become lighter and had the stuffing knocked out of it.” 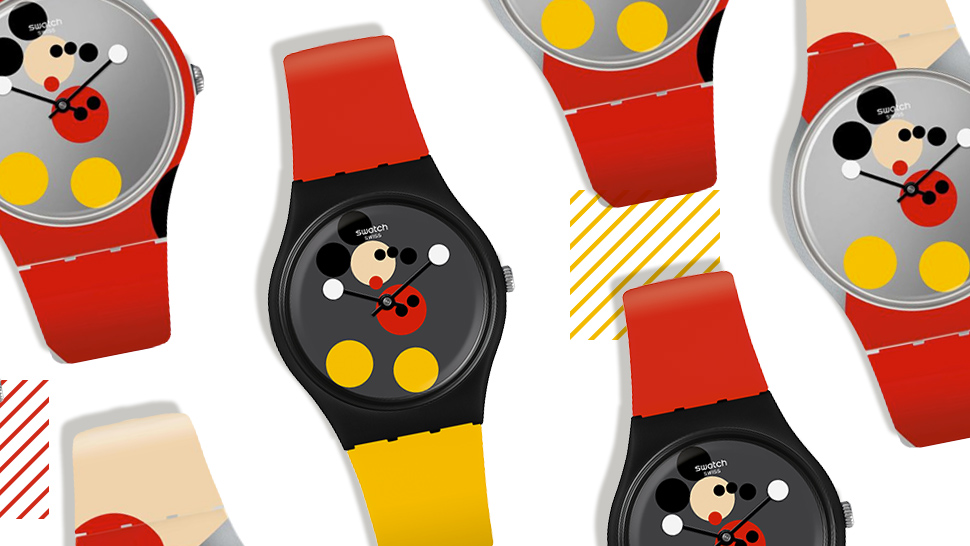 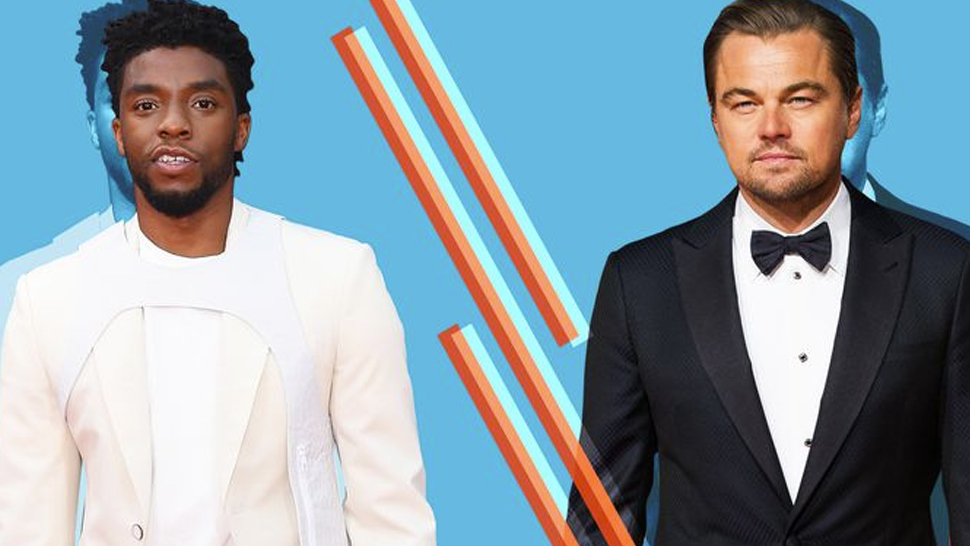 Who Is The Most Stylish Man Of 2018? Round Seven: Chadwick Boseman vs. Leonardo DiCaprio
All Photos
Comments
View As List