The actor collects planes and helicopters, so of course he wears a Breitling Aerospace. 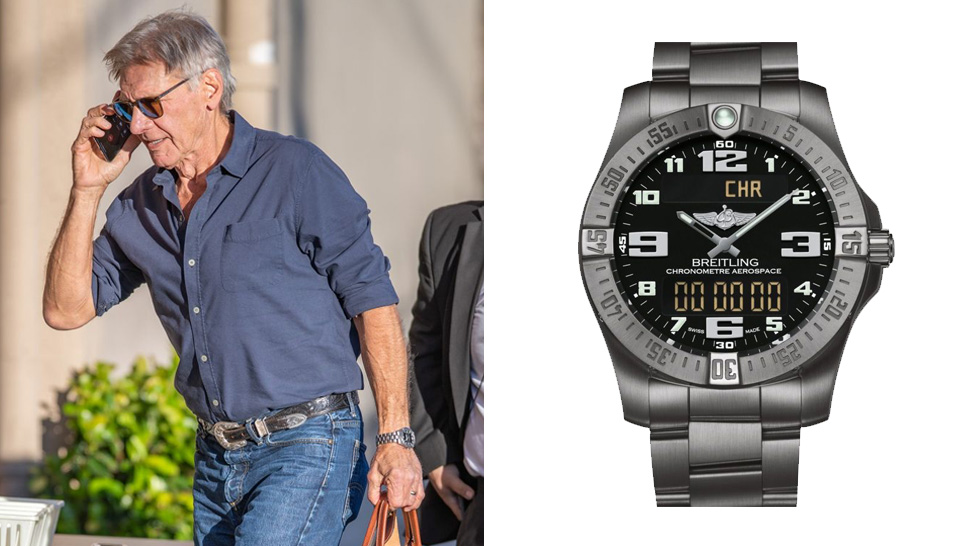 Harrison Ford's filmography features enough aircraft to mount an airshow. There's Han's beloved Millennium Falcon in Star Wars, of course. And Air Force One in, er, Air Force One. In the first Indiana Jones film he fights Nazis on the wings of one plane; in the third installment, he takes off and battles them in a biplane. In Hanover Street, he took to the skies against the Germans again, as the pilot of a B-52 bomber.

It might be a coincidence, or it might be because Ford properly loves flying. A licensed plane and helicopter pilot, he's logged thousands of hours in the cockpit and has an extensive plane collection, including a Ryan PT-22 that was originally designed for training US military pilots in the Forties, and a de Havilland Beaver, which just happens to be the same model of plane that he flew (and crashed) in Six Days, Seven Nights.

Which is why, when Harrison Ford picks a pilot's watch, he doesn't go for something that just nods to time spent in the air. He picks a watch that actual pilots wear: the Breitling Aerospace. Launched in 1985, it was one of the first watches to couple analog time-keeping with digital displays for functions like a chronograph, dual timezone, alarm, and a minute repeater. In other words, all the stuff that might come in handy when your aircraft's engines fail and you have to crash land on a golf course, as happened to Ford in 2015.

The 43mm watch is powered by Breitling's SuperQuartz Calibre 79, a thermocompensated electronic movement that adjusts the vibrations of its crystal according to the air temperature to maintain incomparable levels of accuracy (it's good to within 15 seconds a year, which is more than 10 times better than traditional quartz).

All of which proves a couple of things. First, that mechanical isn't the only option when you're looking for a watch that might save your life. And second, that Harrison Ford is, and always will be, an absolute badass.

50 Years of Chronographs: A Look at Some of the Most Notable Tudor Watches
All Photos
Comments
View As List