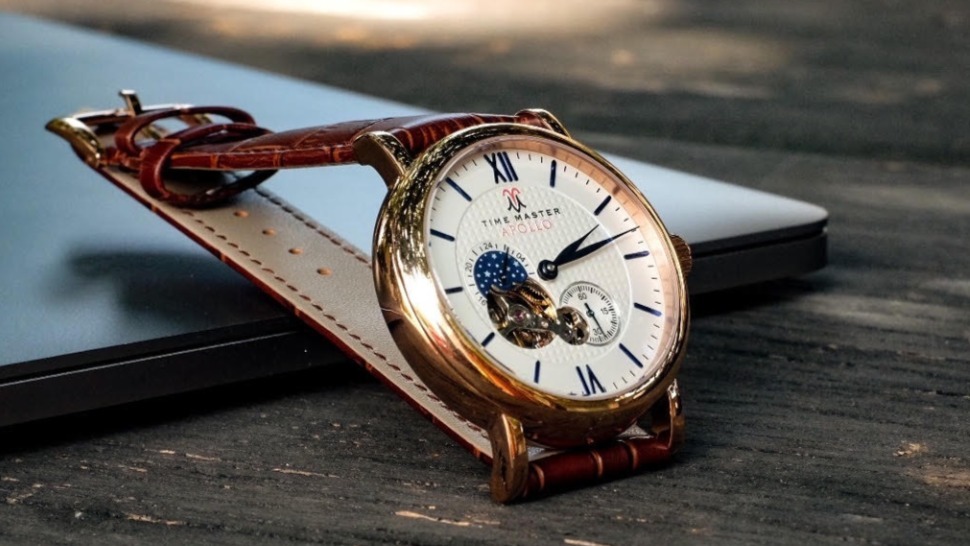 Let us introduce you to the Apollo, the pretty wrist candy by Filipino company Time Master Watches. The automatic watch combines both the chronograph and tourbillon complications. And that’s quite impressive, especially since the latter, the spinning tourbillon, is a feat of microscopic engineering. However, it won’t be the Apollo’s guts that you’ll be drawn to, but its elegant form.

Top Story: How the CIA Used the Aswang to Win a War in the Philippines

Observe: The watch leans classic with its the undeniable combination of a gold case with brown strap, but it remains contemporary by employing blue hour markers—the 12 and six in Roman numerals and the rest as bars—on a clean, white face. 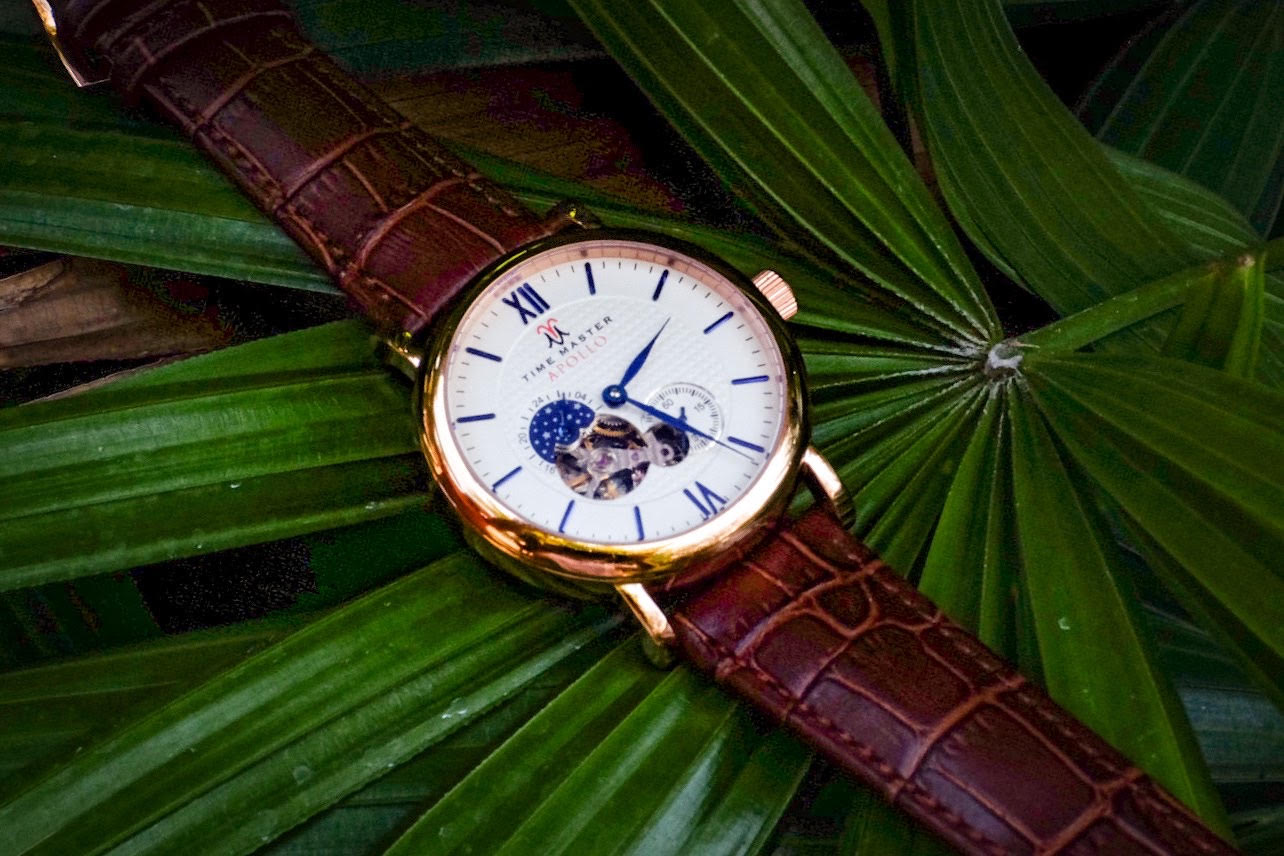 Much of the action happens within a recessed circle, where four little spheres are huddled together like bubbles. Two of the circles form the window, into which you can glimpse the tourbillon’s machinations... for hours.

At 44mm, the watch is also a good size. It’s far away from delicate (you should know, however, that small watches are back) and is just shy of being clownishly big on the wrist. The entire look says it is not the Old Man’s watch but the watch of his son who is being groomed to take over the company (if he wants to).

And that leads us to its maker, Brian Poe Llamanzares, very busy man, young entrepreneur, and son of the senator Grace Poe. Brian established Time Master in 2017 and has since explored more ventures. He is now the CEO of the watch company, CFO of Barley & Craft, a craft beer club, and the chief of staff of senator Poe.

On top of these, the Columbia University graduate is also a youth ambassador for Habitat for Humanity Philippines, the non-profit group that is currently focusing its efforts on COVID-19 relief. For this, Brian gives a hand by donating a portion of each sale of the Apollo watch. “This program will help to support hygiene and sanitation projects to protect communities across the Philippines,” he says.

But back to the watch: The Apollo, which retails for P12,500 (not a princely sum), will be produced in limited quantities and available only online. “It’s a great watch,” says Brian, who adds that what he likes most about it is how it will remind you of something good. Whenever you look at the Apollo's mesmerizing tourbillon, you’ll remember that you also helped those in need. This won’t be a guilty purchase. 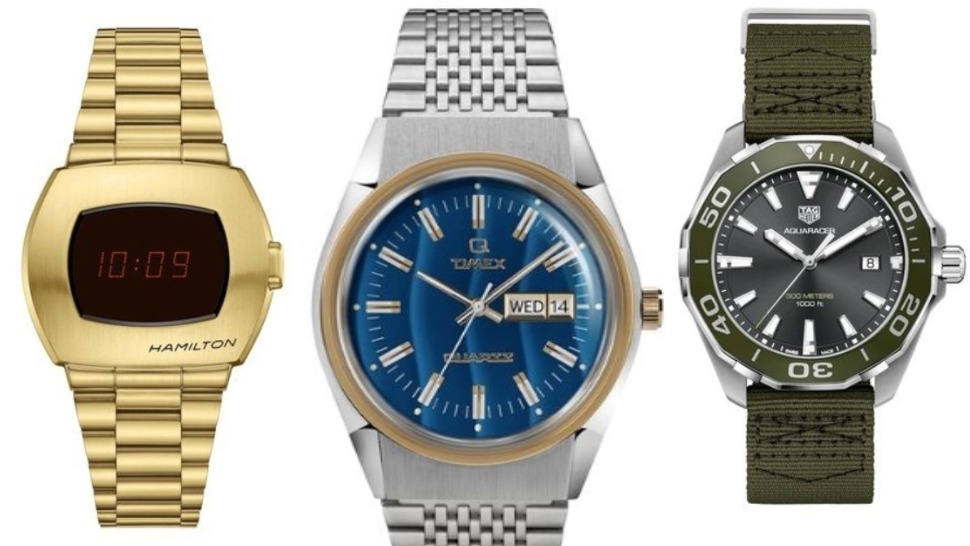 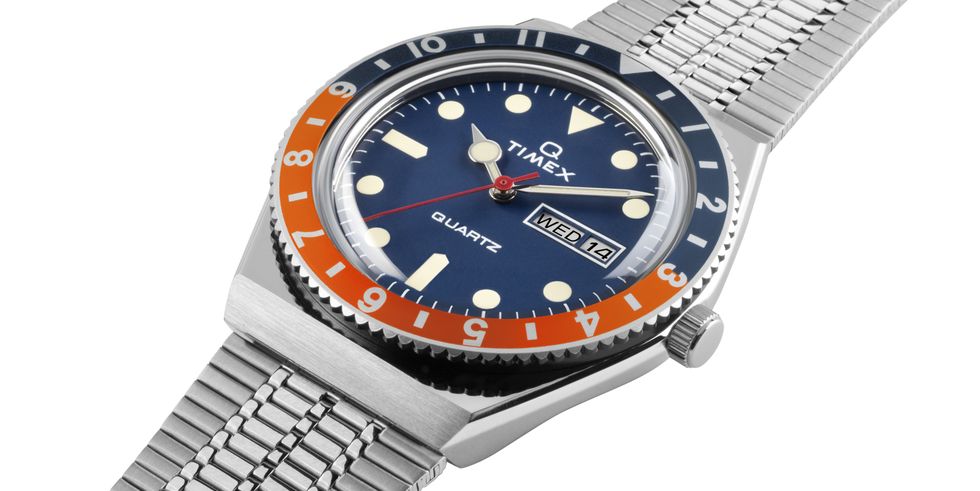 The Q Timex Reissue Is Back and Bolder Than Ever, Courtesy of 3 New Colorways
All Photos
Comments
View As List