Retail giant H&M's steady expansion has been apparent in the Philippines in the past few years. The Swedish brand owes most of its global success to the Persson family, whose patriarch started it all.

Here's what you need to know about Stefan Persson, the current chairman and majority stakeholder of the world's second-largest fashion apparel retailer.

He inherited H&M from his father, Erling Persson.

The retail company marked its humble beginnings with a simple womenswear store called “Hennes,” which in Swedish means “Hers.” Thirty-year-old Erling Persson, Stefan’s father, came up with the idea during a trip to New York and opened the pioneer branch in Västerås, Sweden in 1947.

Persson designed the Hennes logo himself, using the same font that the H&M abbreviation has become famous for. The growing brand later opened two more branches in the Swedish capital of Stockholm and ended the decade with a flagship store built in a skyscraper in the Hötorget area of the city.

Two decades later, Hennes purchased hunting apparel retailer Mauritz Widfross and incorporated “Mauritz” into its name. It then began selling clothes for both men and children. In the ‘70s, the store was rebranded as “H&M.” In 1982, Stefan Persson stepped in as CEO. Under this new management, the retailer moved into a successful era, where it saw the world’s most iconic supermodels such as Cindy Crawford, Naomi Campbell, and Linda Evangelista fronting its campaigns. It also continued to expand throughout Europe and offered online shopping in Sweden in 1998.

He started by handing out promotional materials outside H&M’s first store in London.

When Persson took his place in the family business, he wasn’t afraid of doing menial tasks. During the launch of the first London branch, he stood outside the store, handing out ABBA records as a marketing ploy. His first position was as the country manager in the U.K.

He is the richest man in Sweden.

Persson has stepped down as H&M CEO but continues to be its chairman with a current stake of 40 percent of the company's shares. With a net worth of $17 billion, according to Forbes, he is the richest person in Sweden. Persson has also expanded his dossier into retail properties around Europe and the U.S.

His three children, Karl-Johan, who succeeded him as CEO, Charlotte Söderström, and Tom Persson are billionaires, too. 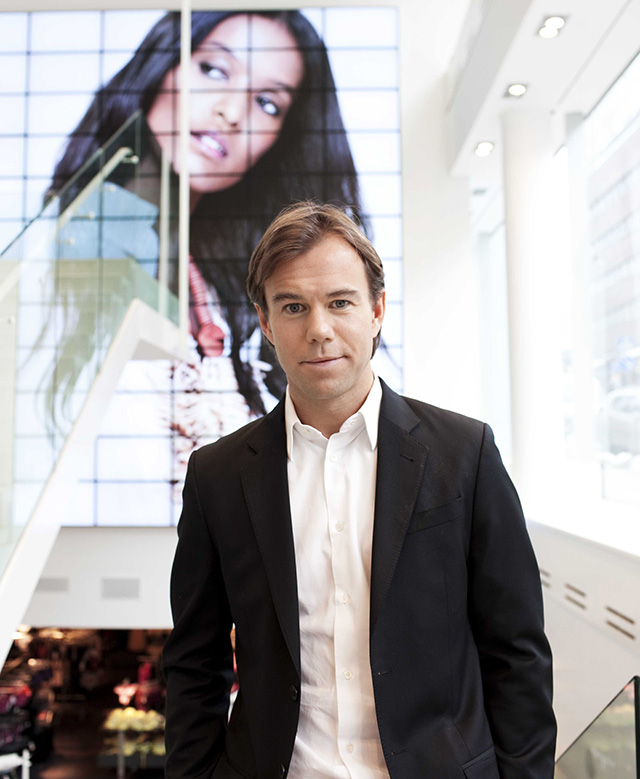 He also invests largely in real estate, owning property in some of the world’s most expensive commercial spots.

With his penchant for real estate, Persson has purchased prime lots in the world’s most frequented shopping districts. He owns real estate on Oxford Street, London, Champs-Elysée, Paris, and Fifth Avenue, New York. Through his company Ramsbury Property, he’s also snapped up many properties in the countryside, such as an 8,700-acre farmland on Savernake Estate, which consists of 31 cottages and homes. Of course, he reserves more than ample land for himself. Two years ago, Persson commissioned a three-story, nine-bedroom mansion to be built on Ramsbury Estates, which takes up 780 acres of his property. The mansion, called Park House, includes an orangery, pool, tennis court, and a parking space good enough for 12 cars.

It makes sense that Sweden’s royalty would mingle with the country’s retail king. Persson is very good friends with Swedish royals, who were spotted at Persson’s 70th birthday just a few months ago. Those aren’t his only royal friends. Both Queen of Sweden and Queen Noor of Jordan serve as trustees on the board of Persson’s charity, the Mentor International.

He founded the Mentor Foundation.

One of Persson’s biggest advocacies is the fight against drug abuse. He was one of the co-founders of NGO Mentor International, which works to prevent drug abuse among the youth. Persson is so vocal about his stance against drug abuse that when Kate Moss faced drug charges in 2005, H&M immediately dropped her as its endorser. “After having evaluated the situation, H&M has decided that a campaign with Kate Moss is inconsistent with H&M’s clear dissociation with drugs,” a spokesman said at that time.