The letter by Major Lazaro Macapagal, along with a confession of Emilio Aguinaldo’s involvement in Bonifacio’s death, is up for auction this month.

By now, historians have deciphered the extent to which President Emilio Aguinaldo was involved in Andres Bonifacio’s death. It is called the death sentence that would forever alter our nation’s history. On May 10, 1897, the founder of the Katipunan and the father of the Philippine Revolution was gunned down by Aguinaldo loyalist Major Lazaro Macapagal. This was the sentence bestowed upon him and his brother Procopio for committing treason against Aguinaldo’s government.

The story has been told time and again: After an event known as the Tejeros Convention elected Aguinaldo as president of the new revolutionary government, a disgruntled Bonifacio would not accept defeat. A coup to overthrow Aguinaldo was underway—the Supremo had gathered some men at the Naik hacienda house to gather support. 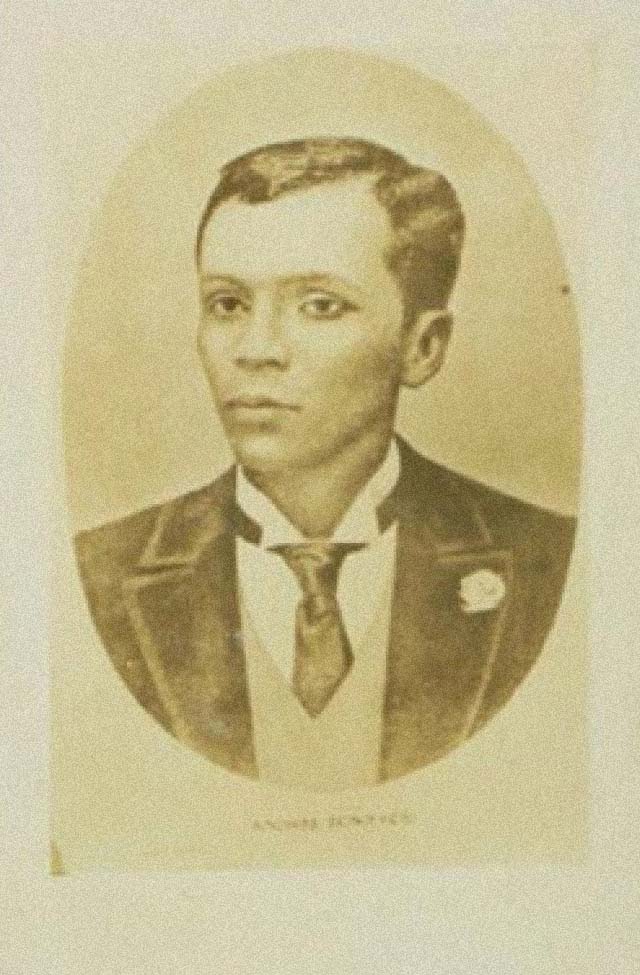 Andres Bonifacio, founder of the Katipunan

His brother Ciriaco had detained some of Aguinaldo’s men, while a floor above, Bonifacio met with his rival’s generals, Mariano Noriel and Pio del Pilar, to persuade them that they must join forces to stop Aguinaldo in the fear that he had plans to hand over the government to the Spanish.

Among the men downstairs, Macapagal escaped Ciriaco’s clutches and reported back to Aguinaldo. As the odds began to weigh in favor of the young President, Bonifacio fled, “completely unaware that his coup d’etat had collapsed and that he was now in a fight for his life and not just political power,” according to Leon Gallery curator Lisa Guerrero Nakpil.

After a failed attempt to escape led to Ciriaco’s demise and the remaining Bonifacio brothers jailed and tried, the Supremo’s future began to look bleak. The generals who had momentarily been on his side turned their backs on the Supremo. Del Pilar testified as a witness to the failed Military Agreement, while Noriel was named of the “Consejo de Guerra” or Council of War. Macapagal was aptly rewarded for his allegiance to Aguinaldo and appointed the Council’s secretary.

Bonifacio and his brother were sentenced to their deaths, but a valuable letter written by Macapagal provides context to the gruesome event.

Today, these documents that have never been known to exist have resurfaced and are going under the gavel during the fifth edition of the Asian Cultural Council-Leon Gallery benefit auction.

About 30 years after Macapagal and his men pulled the trigger on the Bonifacio brothers in the mountains outside Maragondon, Macapagal wrote a letter recounting the events to scholar Jose P. Santos.

He said Noriel had instructed him to read out loud the contents of a sealed letter containing their sentence only when they had reached the “ ng tala.” The orders were: “Pagdating doon, , ng ng at loob .”

("When you get there, open the envelope, read it aloud in front of the two, and follow the directions of the letter closely.") 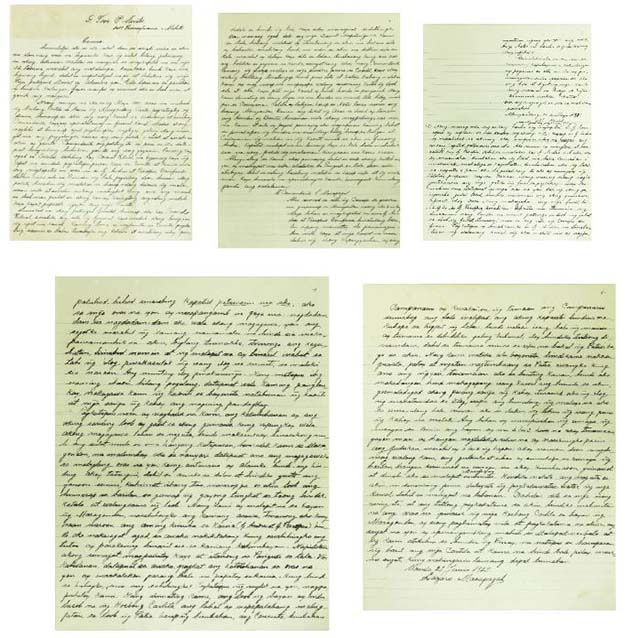 The sentence in question was execution by firing squad or “.” In the letter, Macapagal recalls how the Supremo supposedly knelt and pleaded for his life “ng ay - ‘Kapatid, mo .’” He then ran to save his life.

Guerrero Nakpil expresses her disbelief in these events ever transpiring, especially coming from the brave Bonifacio. Factually, it was also improbable that the injured leader was capable of running, given that his untreated wounds would plausibly have him suffering from gangrene or other infections.

Other pivotal documents that add more context to this historical plot are two letters from Aguinaldo himself. He, too, wrote to Jose P. Santos, who had by then published the biography on Gregoria de Jesus, Bonifacio’s widow. The handwritten letter dated March 22, 1948, is evidence that the former president admits he was involved in the execution of Bonifacio but under the pretenses that he was merely pressured by Council of War members General Noriel and General Del Pilar, who found the Supremo guilt of treason. Because of their prodding, Aguinaldo allegedly increased the gravity of Bonifacio’s sentence from exile to execution. 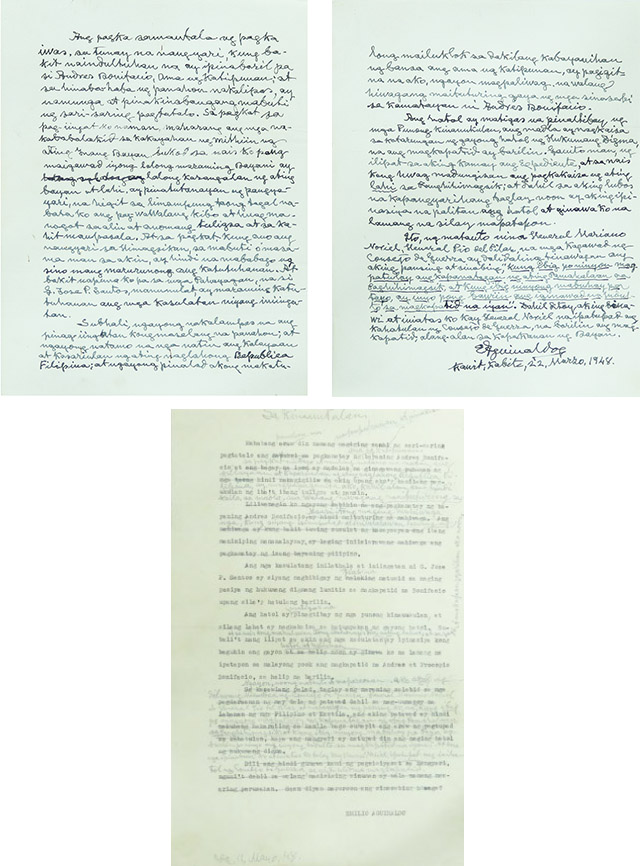 Aguinaldo's letter to Santos, explaining his involvement in Bonifacio's execution

A second document, this one typewritten, details how Aguinaldo claims he had reduced the death sentence to exile but the message had not reached his men in time. Guerrero Nakpil also notes that these lines “are crossed out, however, and are amended with the same words as in the handwritten statement.”

Macapagal’s letter will go on the auction block with a starting price of P150,000, while Aguinaldo’s confession starts at P1,250,000. Buyers will also get to preview the handwriting of Emilio Jacinto in his own rare manuscripts, which date from 1896 to 1899.

Also up for auction are the Gregoria de Jesus’ handwritten autobiography entitled Mga Tala ng Aking Buhay, which consists of 17 original pages and a first edition copy of Noli Me Tangere by Jose Rizal, which is still in excellent condition with a starting price of P1,500,000. Take a look at the auction’s complete catalog here. 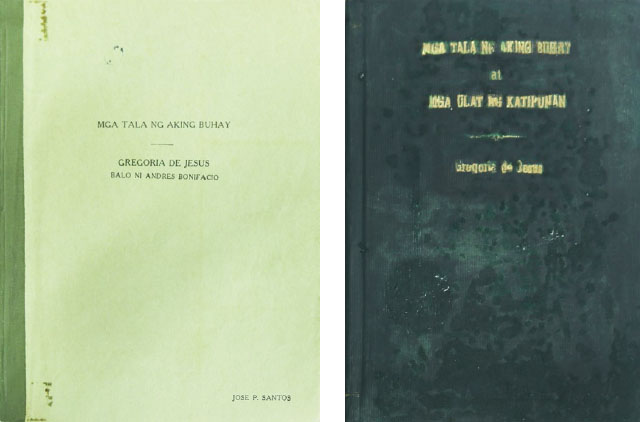 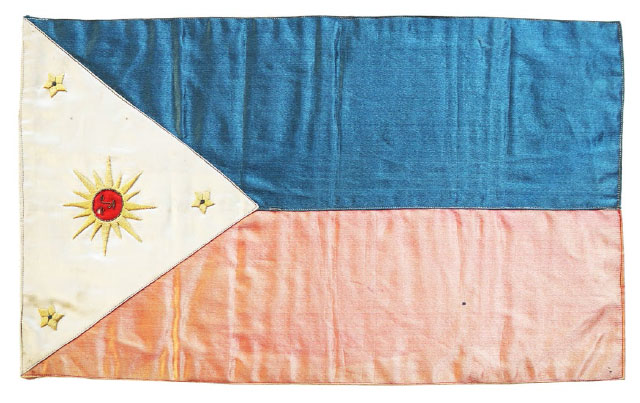 A Philippine flag from the early 20th century unfurled by Emilio Aguinaldo in Kawit, Cavite 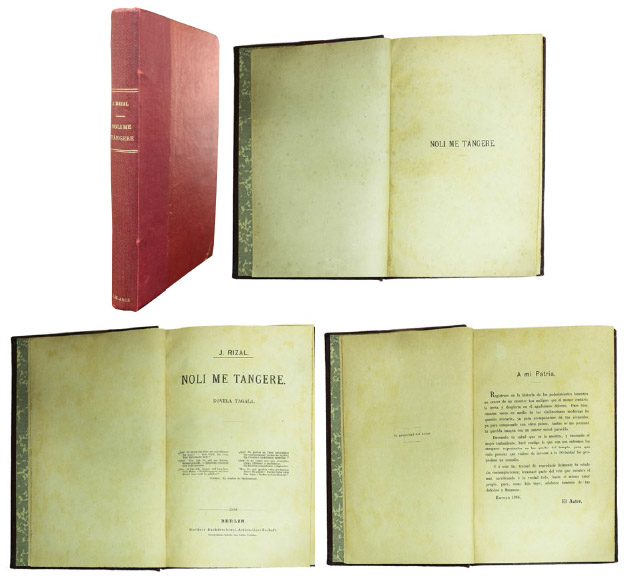 “Finally, these pieces will be seen by everybody, together with other documents that have not been known to exist,” says Leon Gallery director Jaime Ponce de Leon. He adds, “With a good price in , collectors have been encouraged to sell [these documents], which would allow historians and people interested in piecing together the missing puzzles of our history access too.”

The fifth Asian Cultural Council Art Auction will take place on February 23, 2019, at the Leon Gallery, with a special preview of the items taking place on February 20. The auction hopes to raise funds for the benefit of the foundation’s ACC Philippine Fellowship Program. The program has been giving artists the boost they need to pursue a cultural exchange through research, studies, and residencies in the United States or across Asia. Past recipients of the ACC fellowship grant include Jose Joya, Jose Maceda, and Kidlat Tahimik, among others. 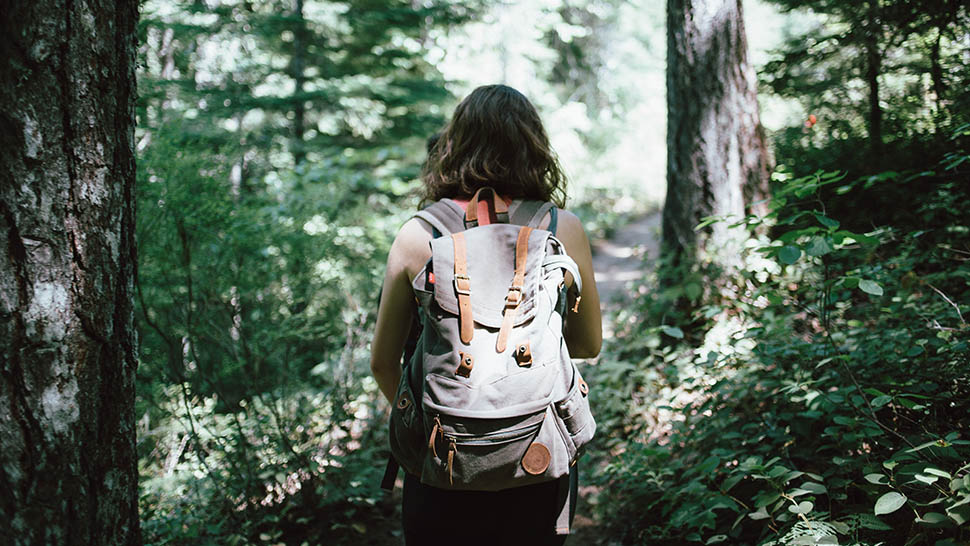 Here's Why Hiking Has Become the New Yoga

How Manila Was Destroyed in a Bloody, Brutal Battle That Killed 100,000 Civilians
All Photos
Comments
View As List