On July 20 and 21, memorabilia from the Quezon Residence will go under the gavel in an online auction. 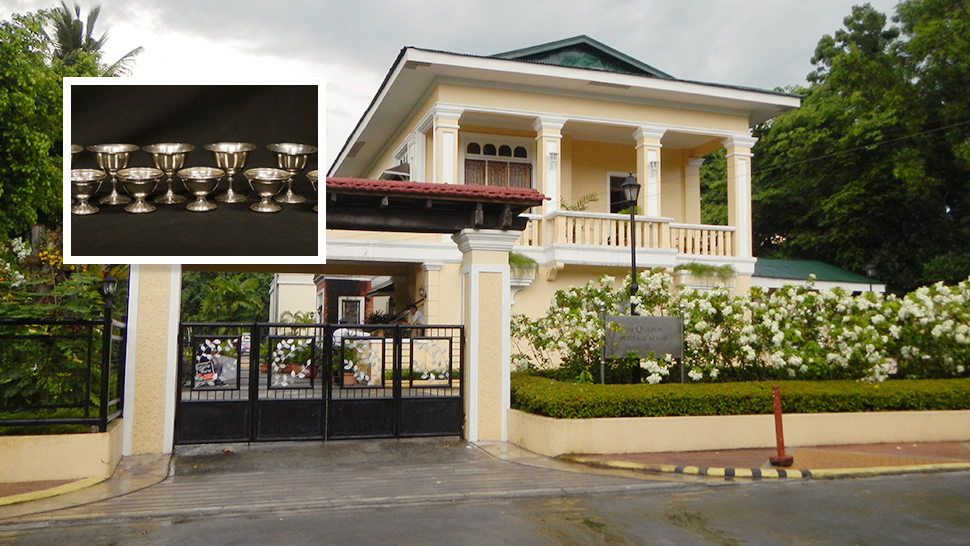 Mention New Manila and a genteel and refined image of the Philippines’ old rich immediately comes to mind. The area was once populated by the country's most affluent and influential who did not only run the Philippines’ major businesses but also the government.

Prior to becoming a residential district, New Manila was part of an expansive friar estate. In the early part of the in the 1900s, wealthy Lebanese national Wadi’ah Hashim—who later changed her name to Doña Magdalena Hashim Ysmael-Hemady after converting to Catholicism and getting married—acquired the property.

In the 1930s, Doña Hemady developed the property as a residential district which she called Hacienda Hemady, also known as Magdalena Estate, which would later become New Manila—the address of Manila’s most affluent. New Manila’s main thoroughfare, Doña Hemady Street, is aptly named after the matriarch. It is next to Gilmore Avenue where Manuel Quezon and his family lived.

Although they were not among “Manila’s most affluent,” President Manuel Quezon and Doña Aurora Quezon were among its most prominent. In 1927, shortly after Manuel contracted tuberculosis and before he assumed the presidency, Doña Hemady offered the Quezons a residence at Number 45 Gilmore Avenue in New Manila, according to a report by Philippine Star. Although the property was used as a weekend house, it would become a silent witness to countless historical events that surrounded the powerhouse couple.

Prior to World War II, the weekend home served as a regular gathering place for friends, countrymen, and government people. The Quezons were also gracious hosts, happily opening their home and finest crystal, silver, and porcelain Chinoisery—all monogramed with the former President’s initials MLQ—to their guests. The 161-square-meter property had a pool at the back, and further down was a pavilion where the Quezons entertained high-profile guests.

Among the high-profile guests that Quezon welcomed into his New Manila home were his poker buddies: would-be American president Dwight Eisenhower and American diplomat and High Commissioner Paul McNutt, both highly respected historical figures in America.

“A House for an Ailing Person”

According to Billy Malacura, the researcher and exhibition writer for the Quezon Heritage House, the residence at Number 45 Gilmore Street was a house for an ailing person, but also a place where the family created happy memories. After all, the Quezon family’s decision to move to Gilmore Street was for the health of Manuel. The environs were clean, and the home was surrounded by trees. It was also located near the Philippine Tuberculosis Society.

According to a report by the Philippine Star, the most interesting feature of the Quezon House was the second floor, where Manuel Quezon and Doña Aurora slept in separate bedrooms connected by a common restroom. At the time, tuberculosis was a difficult disease to cure, and Doña Aurora and had to sleep in a separate room in order not to contract the highly contagious disease herself.

When Manuel Quezon became the President of the Philippines in 1935, he was finally able to purchase the property from Doña Magdalena Hemady, who owned the vast 166-hectare Magdalena Estates in New Manila. According to Manuel Quezon III, Hemady allowed President Quezon to pay her on installment basis, although she was willing to give it to Quezon for free. Quezon, who did not want to be beholden to Hemady, insisted on paying, albeit on an installment basis, to which Hemady obliged.

The Quezon Family Had Celebrity Neighbors

According to Lakbay ng Lakan, Hemady wanted to showcase her estate as the “Hollywood of the Philippines,” so she named a street Broadway Avenue. LVN Studios opened in 1936, then Sampaguita Pictures in 1937. Not long after, movie stars, directors, and producers also took up residence in New Manila.

However, when World War II reached Philippine shores in 1941, most of the residents, including the Quezons, were forced to flee their homes. The Quezon family escaped to Corregidor, and subsequently to the U.S. There, Manuel Quezon was forced to run the Philippine government remotely. In 1944, the first Philippine President died of complications from tuberculosis. The following year when the war ended, the Quezon family decided to return to their home at 45 Gilmore Street.

The house at Number 45 Gilmore continued to serve its purpose in Philippine history. In 1947, Doña Aurora helped establish the Philippine Red Cross in the living room of the house. When Aurora along with daughter Maria Aurora perished in an ambush by the Huks in 1949, the house was left to daughter Maria Zenaida Quezon, whose husband Philip Buencamino also perished in the Huk’s ambush.

According to a report by the Inquirer, Manuel Quezon only lived in the Gilmore house for two months. It was where he recuperated from tuberculosis. The report also states that the National Historical Commission of the Philippines found no grounds to declare the address a heritage site because it has “no major or significant association with the political or personal life of President Quezon.”

Its caretaker, Jose Buyuccan, told ABS-CBN in 2011  the house was reportedly being sold for as much as P120 million. After being sold in 2011, the property was donated to the Quezon City government, which demolished it. In 2013, the Quezon City government established a replica of Number 45 Gilmore on the Quezon Memorial Circle using materials from the demolished house at Number 45 Gilmore. Sixty percent of the materials used in the replica came from the original house at Gilmore street, according to a report by Philippine Star.

Items from Number 45 Gilmore to Go on Auction

On July 20 and 21, memorabilia from the Quezon Residence will go under the gavel in an online auction at  www.leonexchange.com. Sets of silver claret cups, dessert bowls, and punch-bowl goblets are included in the upcoming auction. The items are monogrammed MLQ, indicating the initials of the former President. These were the very sets of silver used in the glamorous parties held during the pre-war years at 45 Gilmore Avenue.

Yesterday Isn’t a Perfect Love Letter to the Beatles, But It Doesn’t Have to Be
All Photos
Comments
View As List