From an incorruptible tongue to a severed hand, these are the world's most mind-blowing religious relics. 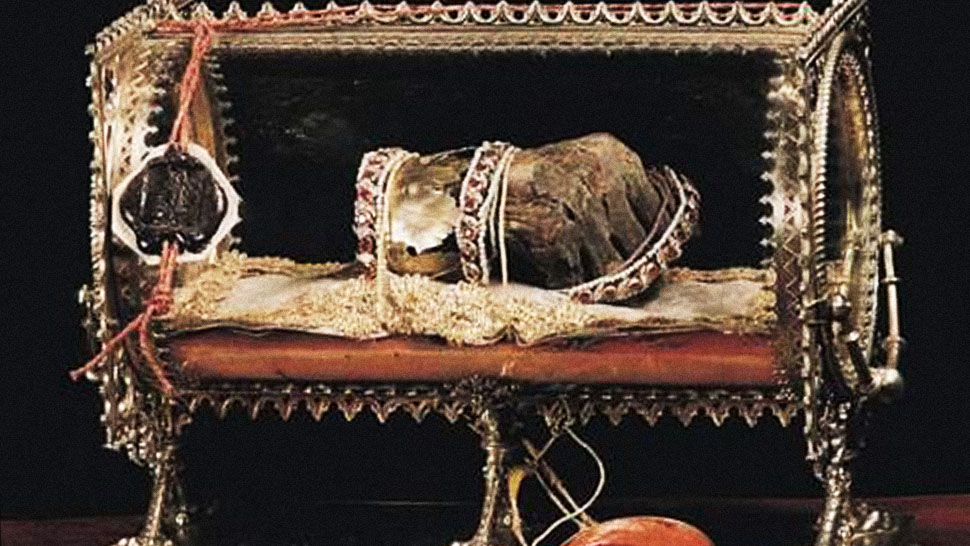 There's a certain fascination about the idea of religious relics. Just last year, the Vatican updated its guidelines to prevent the abuse of religious artifacts. The rule, titled “Relics of the Church: Authenticity and Conservation,” highlights protocol when dealing with relics of saints and the blessed.

Though it stipulates that relics must be “conserved and honored with religious spirit avoiding any kind of superstition,” many have been reduced to mere tourist attractions—especially those of the more unusual varieties. Here, we’ve rounded up the world’s oddest religious relics and the interesting stories behind them. 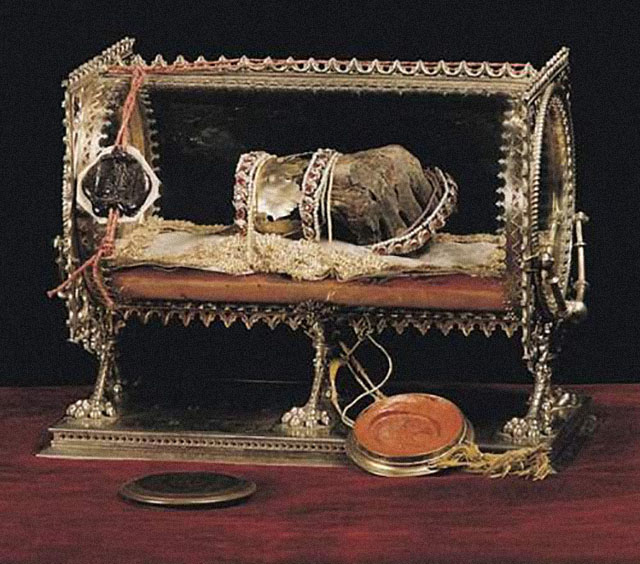 The Holy Right Hand is believed to be of St. Stephen’s, the first King of Hungary. It’s written that shortly after he died, his followers feared that his body would be desecrated. When his body was exhumed to be moved, it was discovered that his right hand was perfectly intact. The hand was subsequently hacked off and placed in the Basilica's Treasury. Today, it’s displayed in the Basilica of St. Stephen in Budapest.

The Blood of San Gennaro

Saint Gennaro was beheaded during the persecution of Christians by Diocletian in the 4th century. Legend has it, Saint Gennaro’s blood was saved by a pious woman called Eusebia and since then, his followers have anticipated the annual liquefaction of his blood which occurs on September 19, December 16, and the first Sunday in May. The reliquefication of his blood signifies a miracle and is said to have saved Naples from disaster. The recorded times that the blood didn’t liquefy include the eruption of Mount Vesuvius, an outbreak of a plague, a WWI bombing, and an earthquake in the ‘80s. In March 2015, the relic was venerated by Pope Francis. 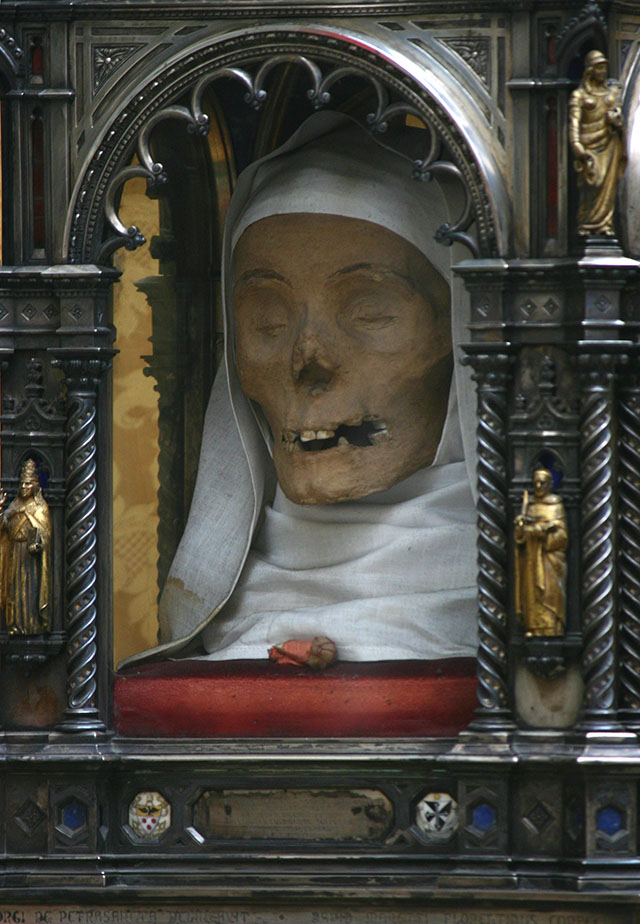 Saint Catherine spent her life helping the sick and poor. When she was 33, she died due to a stroke and was buried in Rome. After being made one of Italy’s patron saints, the people of Siena made requests for her remains to be moved to her hometown. When this was denied, her followers still decided to exhume her. Since they couldn’t transport her whole body, they opted to take just her head. On the way to Siena, they were apprehended by guards, but according to legend, when the bag was inspected they only found rose petals. Her head is currently on display in San Domenico Basilica with one of her thumbs, but several of her remains are spread throughout Italy—three fingers and her foot are in Italy, a rib is in Florence, and her hand and shoulder blade are in Rome.

When Saint Teresa—the foundress and Holy Mother of the Discalced Carmelites—died, her body was found to be incorruptible. Her left hand was subsequently turned into a relic. In 1937, Francisco Franco acquired the hand and used it as propaganda. It was said that the tyrant took the hand wherever he went and slept with it under his pillow. The hand is currently in Iglesia de Nuestra Señora de la Merced in Ronda, Andalusia.

Anthony of Padua’s incorrupt jaw and tongue are perhaps some of the stranger relics. When his body was exhumed over 30 years after his death, most of his remains had turned to dust—save for his jaw and tongue. According to the Catholic Encyclopedia, “When the vault in which for thirty years his sacred body had reposed was opened, the flesh was found reduced to dust but the tongue uninjured, fresh, and of a lively red color. Saint Bonaventure, beholding this wonder, took the tongue affectionately in his hands and kissed it, exclaiming: "O Blessed Tongue that always praised the Lord, and made others bless Him, now it is evident what great merit thou hast before God.” Today, the jaw and tongue are mounted in a metal shrine inside the Basilica of Saint Anthony of Padua. In 2013, the 800-year-old relics went on tour in the U.K. and New York.

The heart of Saint Camillus is one of the world’s most famous relics. When he died after dedicating his life to the sick, his heart was removed and preserved in salt. It’s kept encased in a gold and glass container and has toured several countries, including the Philippines, Thailand, and Ireland.

Following the death and cremation of Buddha in 543 BC, his left canine tooth was founded in the ashes. The sacred relic was then venerated and known for performing miracles. Buddha’s tooth is stored in one of seven gold caskets which are shaped like stupas and covered in gemstones. It can be found in the Temple of the Sacred Tooth or Sri Dalada Maligawa in Kandy. 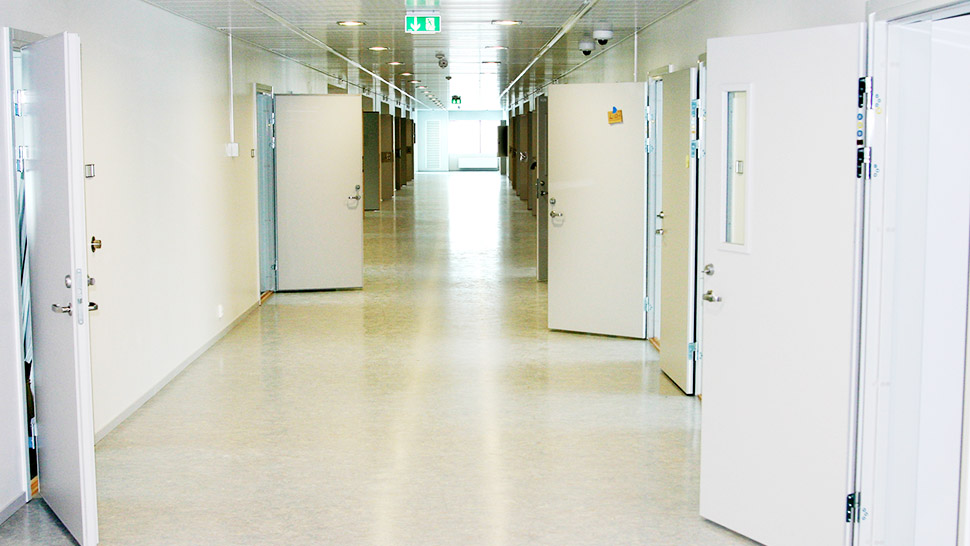 This 'Luxury Prison' in Norway Focuses on Rehab Vs. Punishment