Throughout his life, Amorsolo’s sketches and studies are estimated to number over 10,000 pieces. 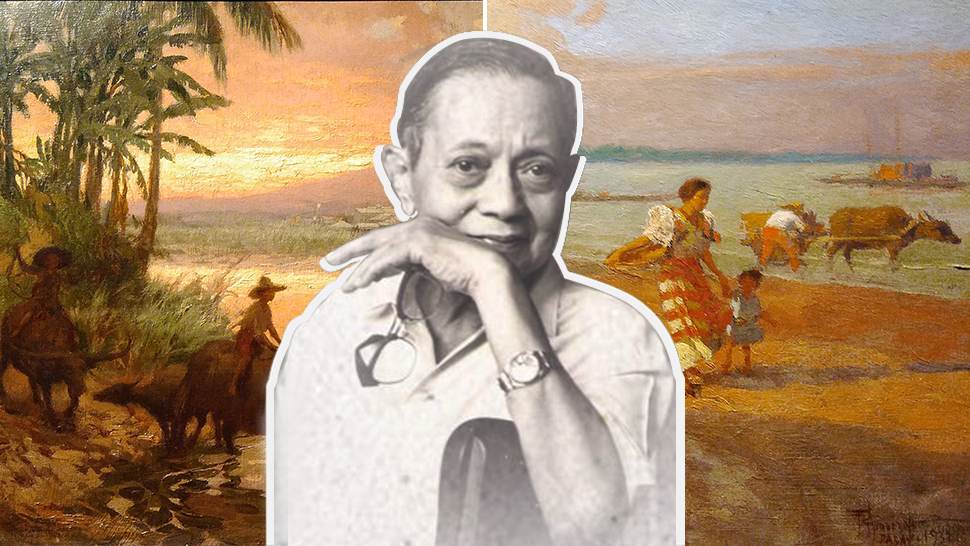 Fernando Amorsolo, the first National Artist of the Philippines for painting, grew up during a time of transition for the country. Amorsolo and his mother moved to Manila and lived with his uncle, Fabian de la Rosa, a painter. Under his uncle’s watch, he learned artistry which set the tone for his career. At 27 he was sent to Madrid to further his art education by Don Enrique Zobel. Under the Mango Tree (1952), was sold for P46,720,000 in 2018 making it his most expensive piece.

In the middle of the night in 1892, Pedro and Bonifacia Amorsolo were awakened by a scuffle and shouting outside their home in Daet, Camarines Norte. Some revolutionaries were outside their home, fighting against Spaniards and demanding that Perico, their eldest son, join their cause. Fernando, then seven months old, awoke crying. Perico left the house that night and eventually joined the rebels. The Amorsolo family never saw him again. Four years later in 1896 after the discovery of the Katipunan, the family learned from their relatives that Perico had died as a prisoner.

Fernando Amorsolo grew up in a period of transition in the Philippines. Much of his childhood was spent in the countryside, on which many of the landscapes in his masterpieces are based. In 1901, when he was 11 years old, his father died of a heart attack. But before his death, Pedro made Bonifacia swear that she would do everything she could to provide a good education to Fernando. 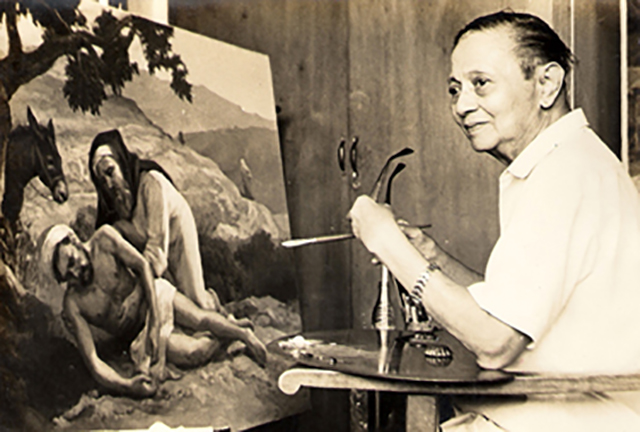 Mrs. Amorsolo knew what she had to do, and that was to leave the beautiful province of Camarines Norte for Manila. She collected her children and travelled back to Manila in hopes of having a better chance of providing for her family. There, her cousin Fabian de la Rosa who was a prominent painter, welcomed them into his home. De la Rosa would become instrumental in steering Fernando Amorsolo’s career toward painting. Meanwhile, Mrs. Amorsolo supported her family by making and selling embroidery.

Under the Tutelage of Uncle Fabian

While staying at the house of their uncle, Fernando Amorsolo volunteered in assisting his uncle, Fabian de la Rosa, in the studio. This would mark the informal tutelage and education that Amorsolo would receive from his uncle. De la Rosa quickly realized that Amorsolo learned fast, and had a natural flair for the pencil and paintbrush.  And because the family at times struggled to make ends meet, Amorsolo would make himself useful by sketching. He would charge people 15 centavos for each sketch he sold. 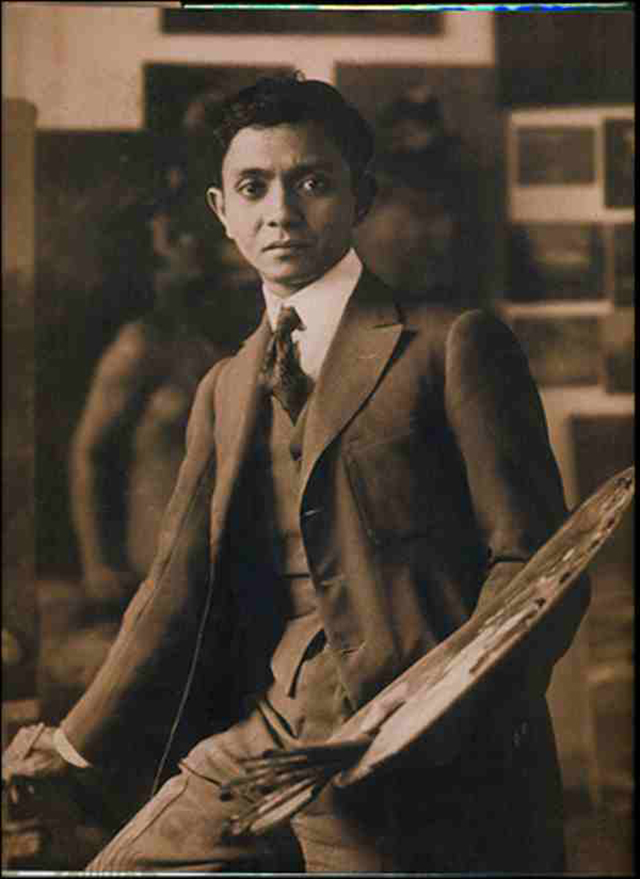 Amorsolo as a young painter

For years, this was what Amorsolo did. He received instruction from his uncle, studied his style and techniques, and eventually became so good that he surpassed him even before he turned 20. They depicted the old Spanish traditions and structures that he saw in Manila as a kid, coming from the point of view of someone who grew up in the countryside. His canvases came alive with pictures of fiestas, old churches, and religious rituals. By this time, he had already produced some of his first works, but these were not the same idyllic landscapes of the countryside we have grown so fond of him.

Even though the family had limited means, Amorsolo managed to earn a degree, thus fulfilling his father’s only wish. He was a member of the first graduating class of the University of the Philippines School of Fine Arts, from where he graduated with honors in 1914.

Creating His Own Path

Amorsolo’s life as an adolescent in his 20s really determined what he would become for the rest of his life. When he graduated from UP, many of his professors thought that his brush strokes already surpassed their own. His old school called him back and offered him a job as a professor.

He was 25 years old when he married his first wife, Salud Jorge. It was also at that time, right after they had their first child Virginia, when Don Enrique Zobel, already a prominent businessman, commissioned Amorsolo to create the artwork for Ginebra San Miguel. 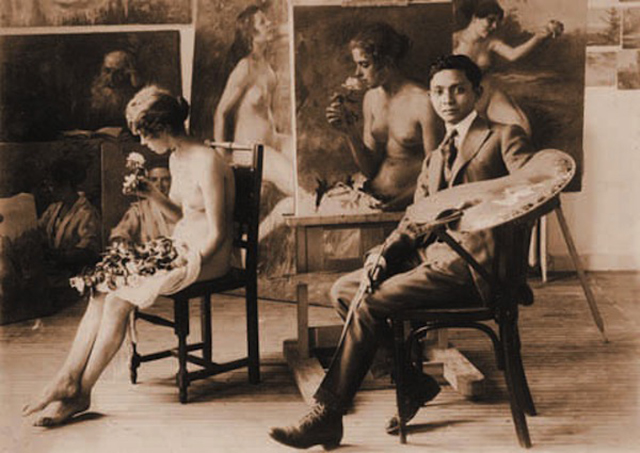 Very impressed with Amorsolo’s work, Zobel offered to send him abroad to study so he could improve his craft. He sponsored Amorsolo’s trip going to Academia de San Fernando in Madrid, and also made sure to provide a generous stipend for the young artist and his family.

When Amorsolo arrived at the Academia, he received the biggest surprise of his life when, after evaluating his work, the administrators at the art school informed him that they would be accepting him as a professor—not a student.

While in Madrid, he soaked up all the culture that he possibly could: He visited museums and art galleries to study the works of masters Diego Velasquez, El Greco, Goya, Monet, Manet, Van Dyck, Sargent, and Joaquin Sorolla.

Velasquez became one of his favorite artists, one whom he studied very closely. Eventually, Amorsolo would acquire Velasquez’ painterly style, superior brushwork, and mastery of color.

Another major influence on Amorsolo during his stay in Spain was Joaquin Sorolla, from whom he learned his signature lighting technique. This technique, which utilizes the sun’s different colors and brightness, would distinguish Amorsolo from his contemporaries.

In 1918, after spending seven months in Madrid, he came home to the Philippines, barely 27 years old, but years ahead in the mastery of his craft.

Amorsolo’s Works Through the Years

After arriving in the Philippines, Amorsolo set out to the Philippine countryside, a favorite of his. His work, Crossing the River (1924) depicts a river in the province of Tarlac. It was commissioned by tobacco company La Tabacalera. 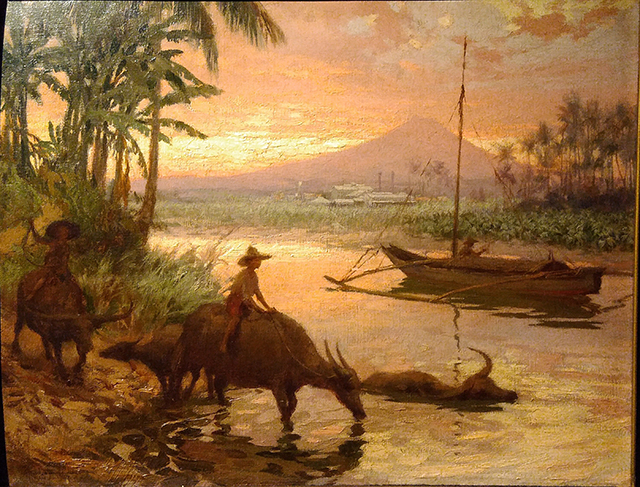 In the painting’s background, the Central de Azucarera de Tarlac can be seen. It would become the Hacienda Luisita.

His Water Maiden (1935) also belongs to the same Tabacalera collection. It features a Filipina carrying a water jug. Here, Amorsolo displays his mastery of light and color, combined with his faithfulness to the painterly style. 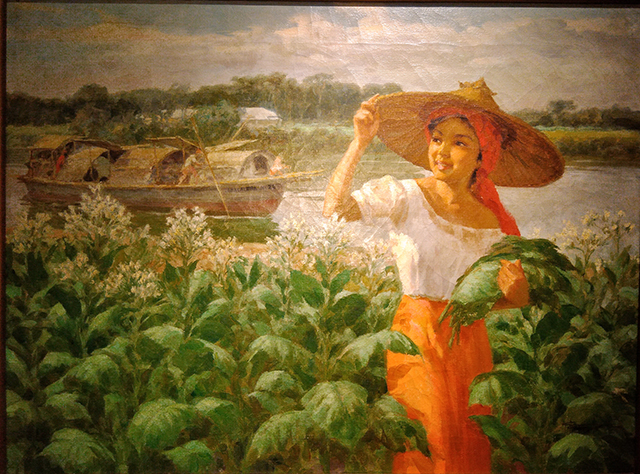 Amorsolo sometimes catered to Western clients, who were the ones who appreciated art at the time. In some cases, he painted commissioned portraits of American or European people. His 1941 Portrait of a Boy is one such example. 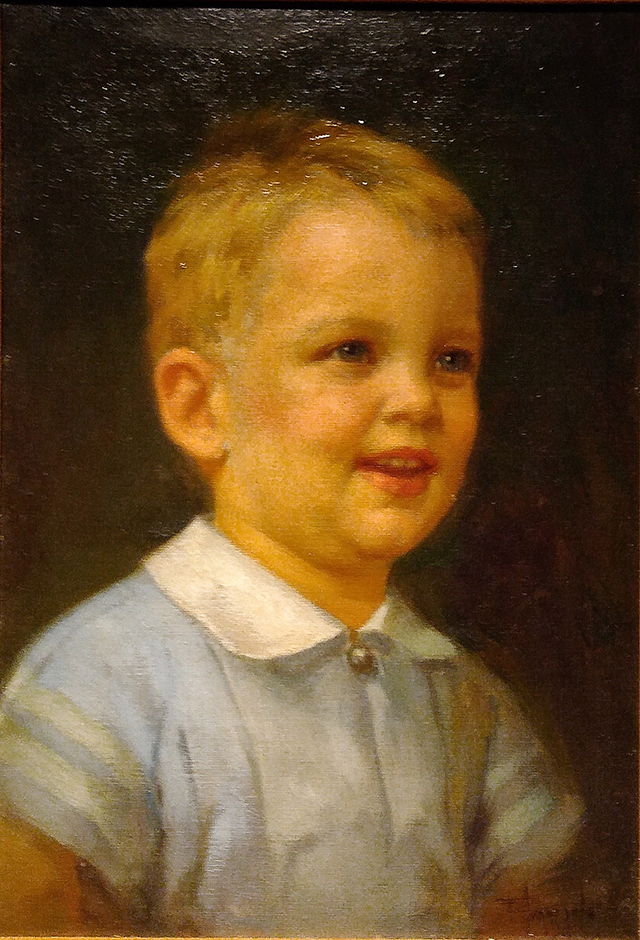 When World War II broke out in the Philippines, it influenced the pieces that Amorsolo created. His 1945 work In Defence of a Woman’s Honor is representative of how his works evolved in the war years.

After the war, Amorsolo resumed painting idyllic scenes depicting the countryside. In 1953, he created The Bathers, which is representative of one of Amorsolo’s favorite themes: maidens in the water. 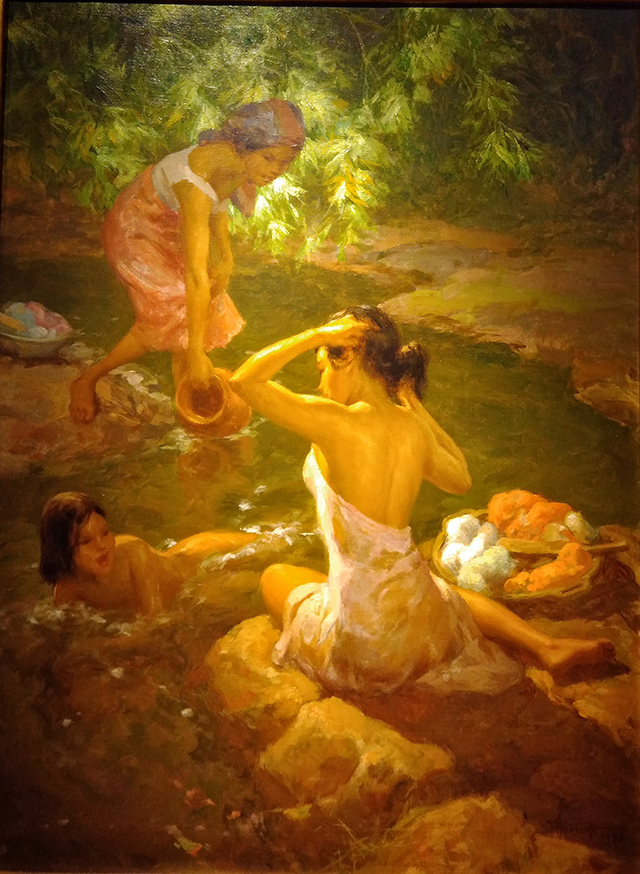 According to Nakpil, such paintings allowed Amorsolo to display all his talents and techniques amid the rising influence of abstract art at that time. Here, Amorsolo displays his masterstroke and most difficult technique: the effervescent sunlight as it reflected on the movement of the clear water. Such paintings were Amorsolo’s answer to the “threat” of abstract art.

Another powerful postwar creation is The Filipino Family (1952). Nakpil explains the painting as rich in metaphor, and describes it as one of the most epic works of Amorsolo. “A strong, sinewy Juan de la Cruz cradles a child, a symbol of our young nation in 1952. It’s been just six years since the end of World War II and the grant of our independence,” says Nakpil. “Lady Liberty is his wife, staunchly at his side. Her back is half-turned in a pose that recalls Juan Luna’s victorious tandem, ‘Espana y Filipinas.’ Three boatmen, no doubt, depicting the perseverance and discipline that we would need to make our nation bountiful, launch their craft into a rose-colored, robust future.” 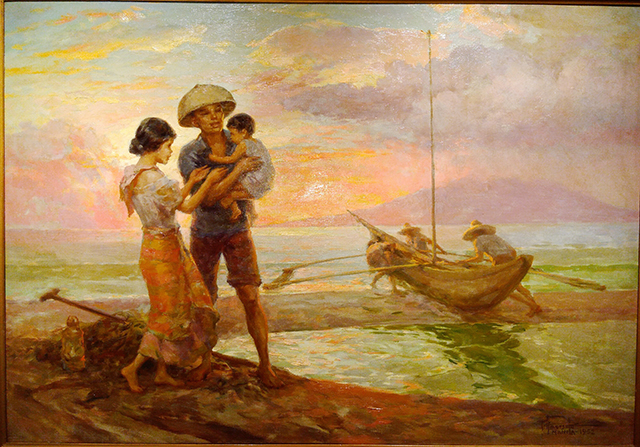 Throughout his life, Amorsolo’s sketches and studies are estimated to number over 10,000 pieces.  In 1972, five days after his death, he was posthumously honored with the Philippines’ first National Artist Award for Painting. He left behind a trail of legacies around the world in the form of priceless paintings that depicted virtue showed his sense of optimism. 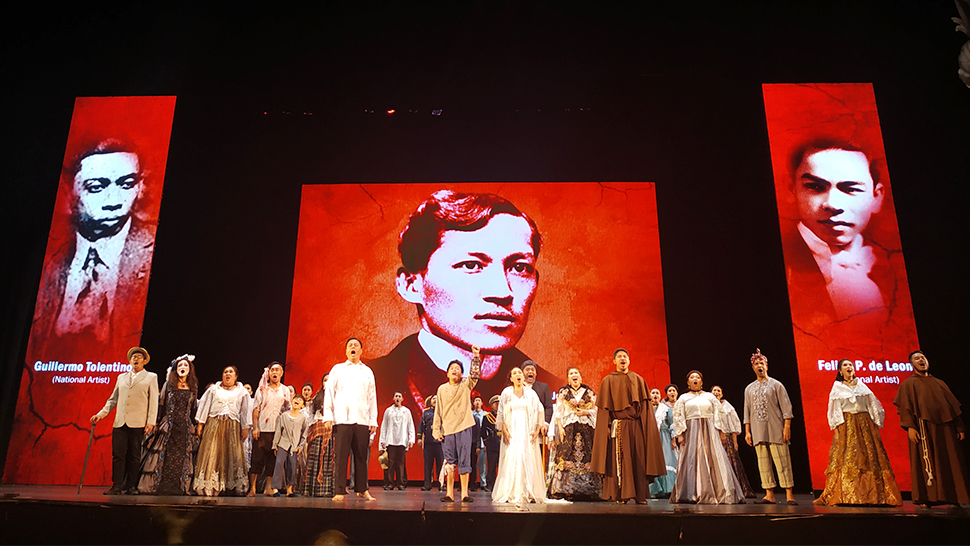 How Noli Me Tangere Has the Youth Interested in Opera Again 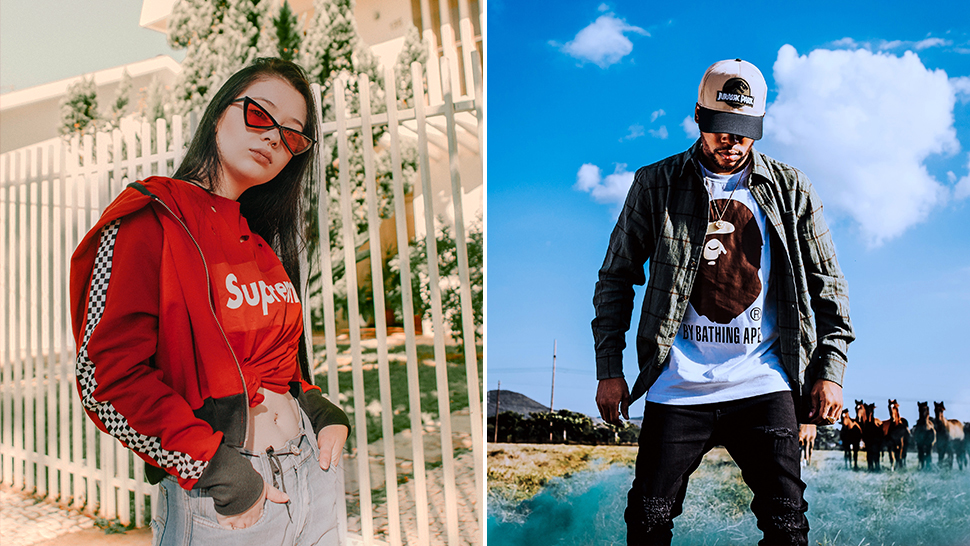