Owned by different matriarchs from the Russian and British royal families, the Vladimir Tiara has survived a revolution, smuggling, and many redesigns. 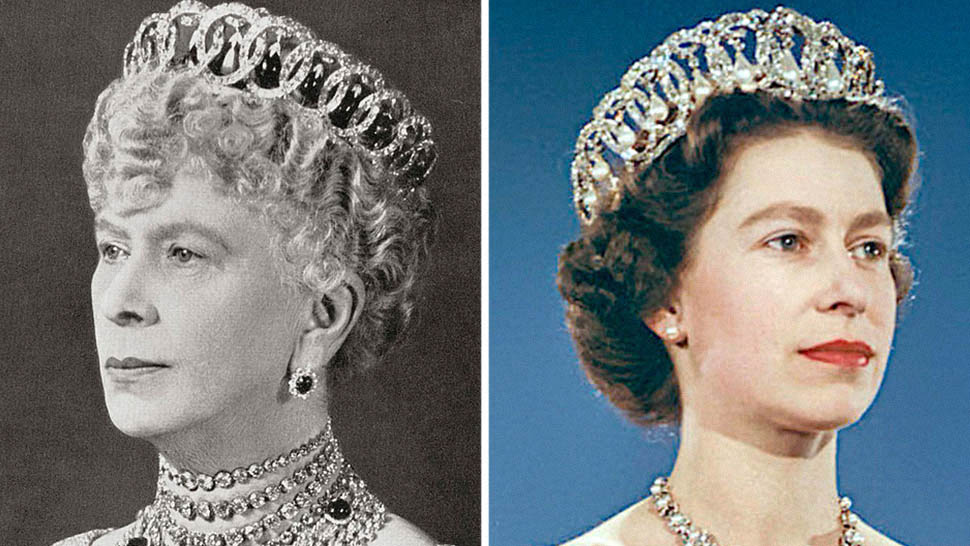 With the recent centennial anniversary of the Russian Revolution, the world can’t help but reflect on what is indisputably one of the most perplexing periods in history, and of course, the infamous family caught in the middle of it all—the Romanovs.

Today, only personal and relics remain to tell their story, a notable one among which is the Vladimir Tiara. Owned by three different matriarchs of royal dynasties, this 144-year-old tiara has a history that extends way past the Romanov era.

In August of 1874, the 20-year-old Duchess Marie of Mecklenburg-Schwerin married into the Romanov family, which made her Grand Duchess Maria Pavlovna. Her husband, Grand Duke Vladimir Alexandrovich, was the third son of Tsar Alexander II—then the all-powerful Emperor of Russia. 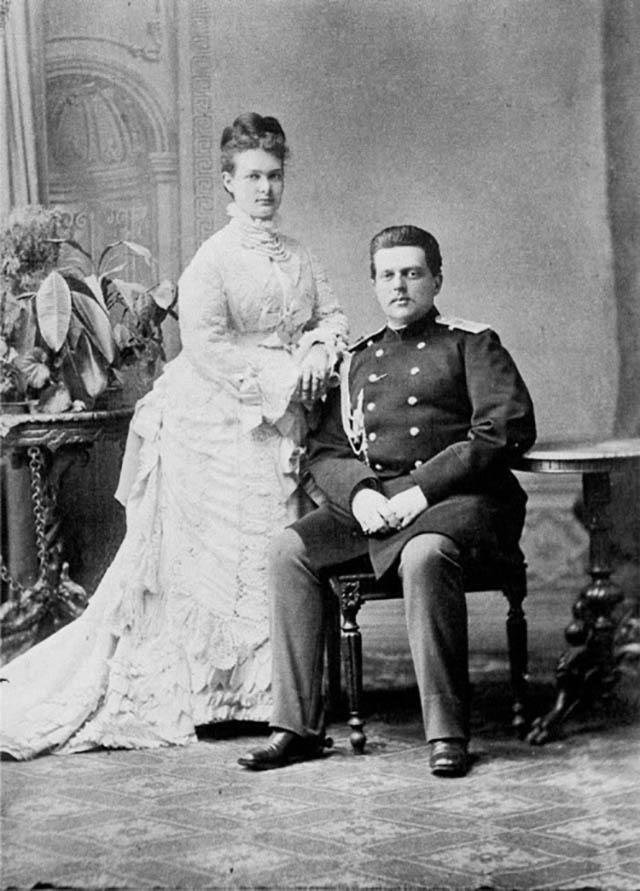 As the newest member of the royal dynasty, the Grand Duchess needed her own set of formal and jewels to meet the elaborate standards of the Russian imperial court, prompting the Romanov court to fashion what is known today as the Vladimir Tiara.

Consisting of 15 interlocking diamond rings, each encasing its own suspended, drop-shaped pearl, this tiara—among her countless other jewels—made her both the rival and envy of the other Romanov women. She wore it interchangeably in both its original and closed-circlet form—meaning without the backing row of curved diamonds and the pearl drops.

The year of 1917, however, marked a turning point for the Russian Empire. Its people, fed up with the corruption and economic strife brought about by the longstanding Tsarist regime, broke out into a period of extended violent protest known today as The Russian Revolution. A few days after the protest broke out, Tsar Nicholas II was forced to abdicate the throne, bringing an end to centuries of Romanov rule.

Following this, Maria Pavlovna was instructed to flee for her own safety, leaving her no choice but to stash her precious jewels—including the tiara—in a hidden safe in the Vladimir Palace.

Journey From Russia to London

With Maria Pavlovna tucked away in a private villa, her son, Grand Duke Boris, and his friend, a British secret agent, devised a plan to retrieve the jewels. Disguised as workmen, the two snuck into the Vladimir Palace and, with the help of a caretaker on the inside, successfully smuggled the contents of the hidden safe to London. 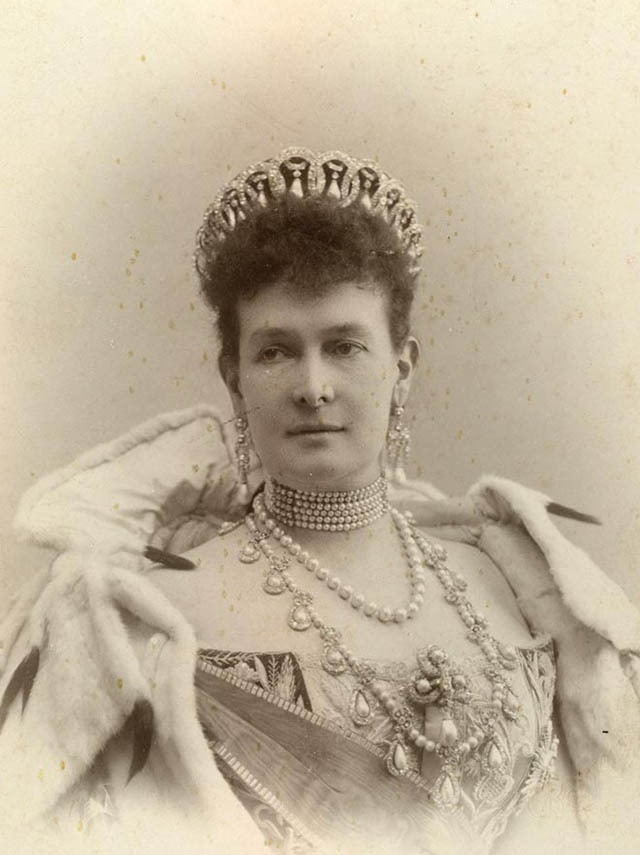 Maria Pavlovna sporting the tiara in 1895.

Just months later, Maria Pavlovna, who at that point, was the last Romanov grand duchess to escape from Russia, was pronounced dead in the small French town of Contrexéville. Before her passing, she had already split her belongings—including her many jewels—among her four children. The Vladimir Tiara went to her only daughter, Grand Duchess Elena, now Princess Nicholas of Greece and Denmark.

A year after her mother’s passing, Grand Duchess Elena decided to sell most of her possessions to support what was left of her family in the wake of the revolution. Of the many buyers, Queen Mary was perhaps one of the biggest, purchasing—among other expensive pieces—the Vladimir Tiara for a price of £28,000. 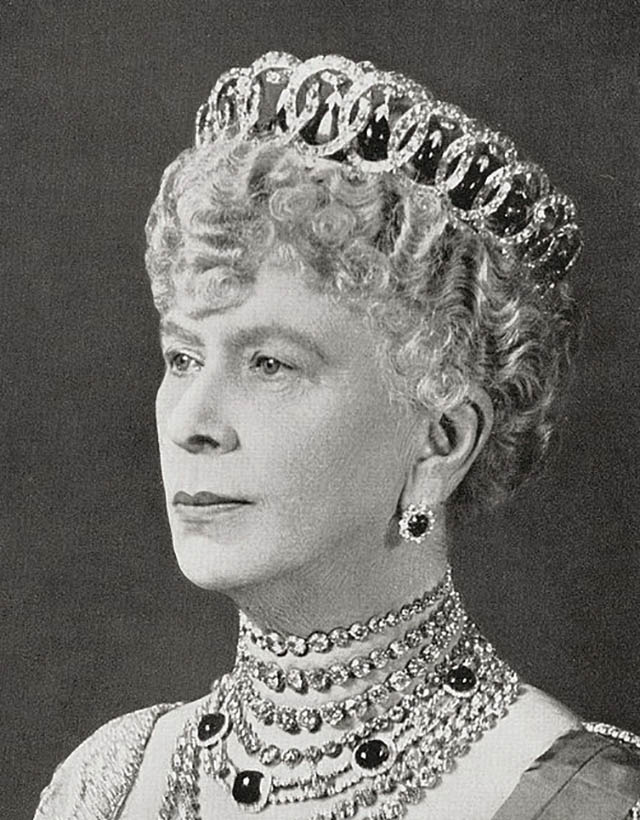 Mary of Teck wearing the tiara with emeralds instead of the original pearl drops.

The tiara was in dire need of repair from the damage it had taken during the tumultuous journey from Russia to England. However, rather than going through with a simple restoration project, Queen Mary had plans to make it more adaptable. As a result, the Vladimir Tiara was adjusted such that it could be worn with the original pearl drops or with a set of fifteen emerald ones, crafted from a collection of emeralds that had previously belonged to her grandmother.

Passed on to Queen Elizabeth II

Queen Mary’s clever modification to the Vladimir Tiara marked its claim to fame even long after her passing. In fact, after having been handed down to the current Queen Elizabeth II in 1953, the tiara became a regular sighting at royal events.

The original pearls, which seem to be Her Majesty's most frequent pick, are often paired with the Duchess of Gloucester's Pendant Earrings and Queen Victoria's Golden Jubilee Necklace. 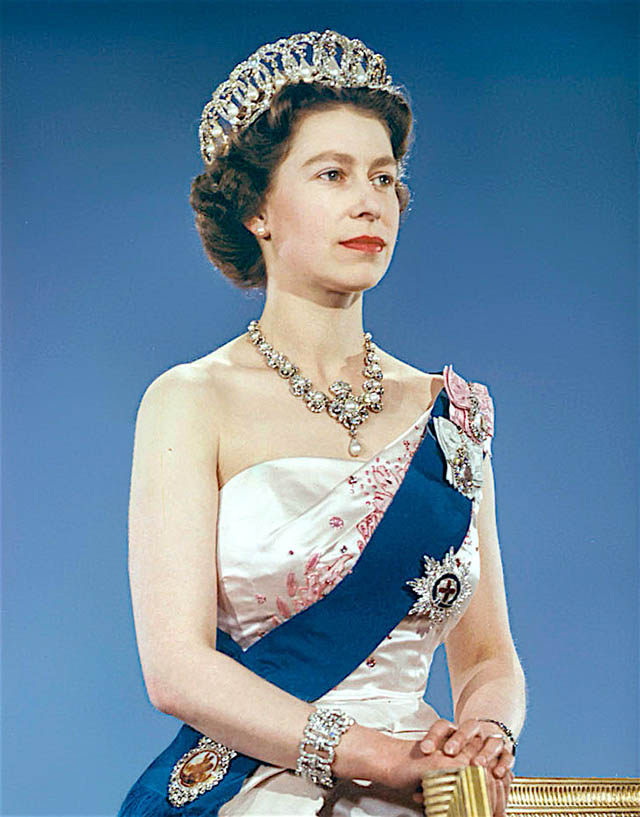 The tiara is currently in the possession of Queen Elizabeth, who here wore it in 1959.

The emeralds, however, have been seen less and less in recent years. When she does don them, they are almost always worn with the Delhi Durbar Earrings and the Delhi Durbar Necklace, maintaining the parure that Queen Mary put together years ago.

Occasionally, she wears the Vladimir Tiara without its pendants, just as the Grand Duchess used to. This gives the otherwise strikingly intricate tiara a lighter, more understated appearance, making it fit for any occasion. 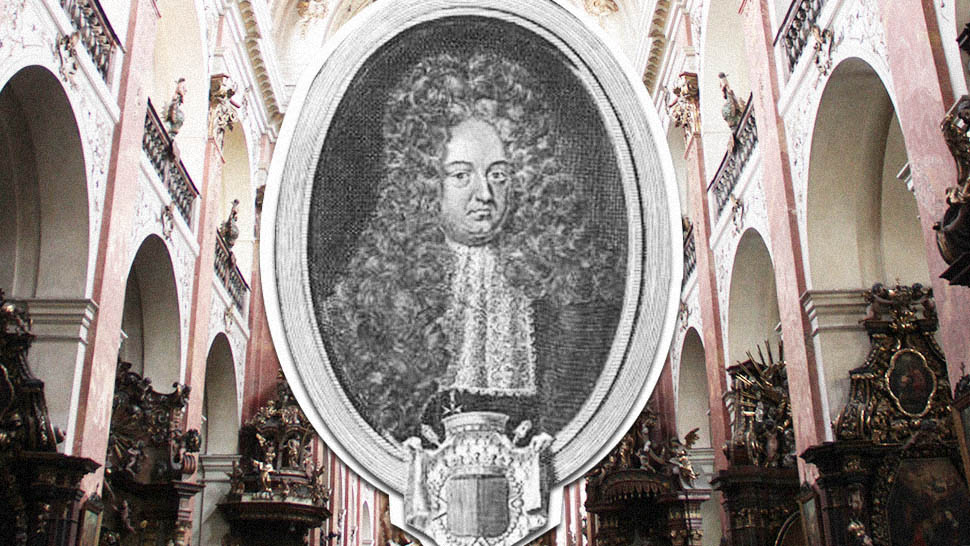 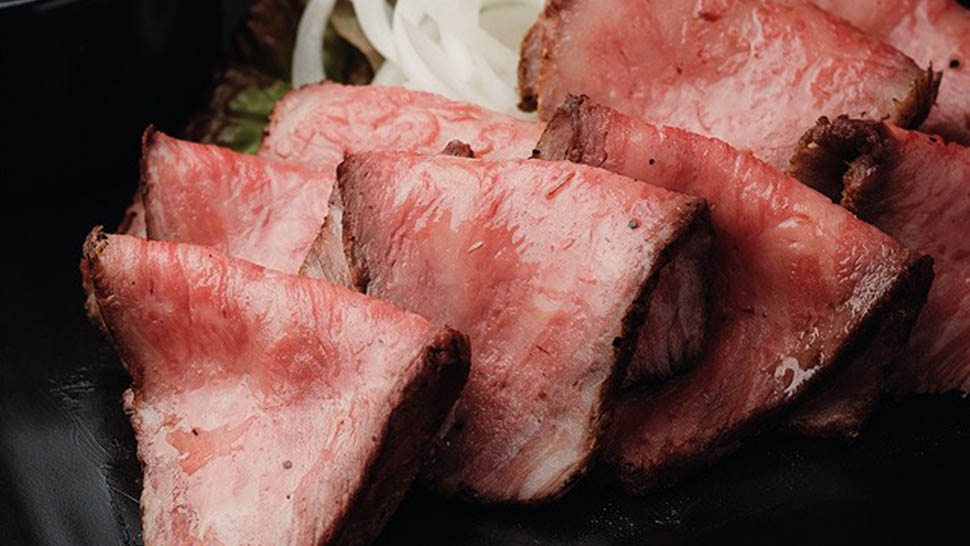 Even Cows Get Straight A's: Where to Get the Highest Quality Wagyu in BGC
All Photos
Comments
View As List