The actor who plays Klaus, Robert Sheehan, says it's a show about "human beings first and 'superheroes' a distant second." 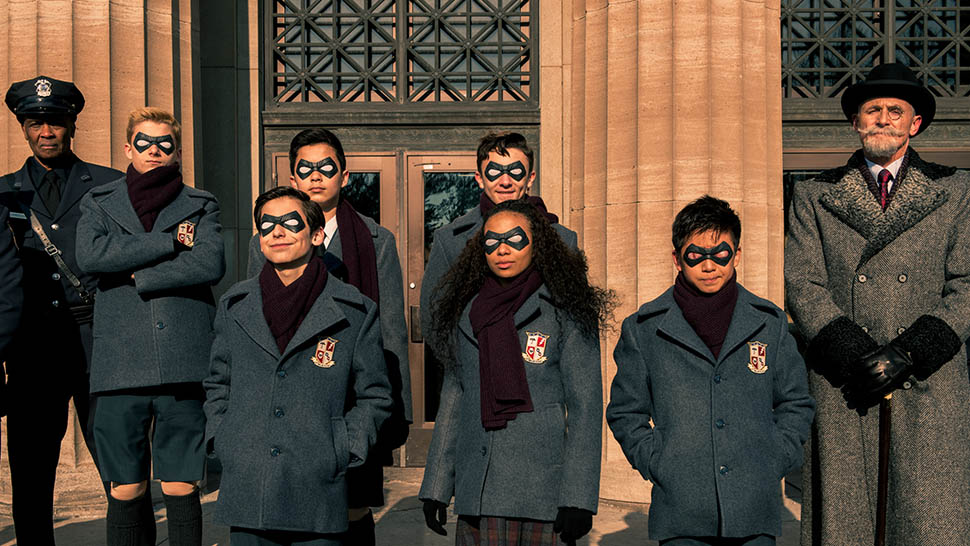 Despite the first impression of characters in exaggerated costumes and a trailer that suggests this band of unlikely siblings possesses supernatural powers, Netflix’s The Umbrella Academy isn’t exclusively about superheroes. Nor is it about anti-heroes.

“Part of the archetypal superhero film is that they get the girl, save the day, but our series explores the necessity of failure,” Robert Sheehan, who plays the wayward drug-addicted “Klaus” in the series, said during a media launch in Singapore.

The series, which premiered on Netflix worldwide on February 15, blurs the lines between satire, sci-fi, and comedy with its premise and execution. “Diego” actor David Castañeda called this “poetic alchemy.” “It was all these different things, along with the music, that plays with the script,” he explained, “It really changes your viewpoint of how you see superhero movies—they’re not invincible, they’re just [like] us.” 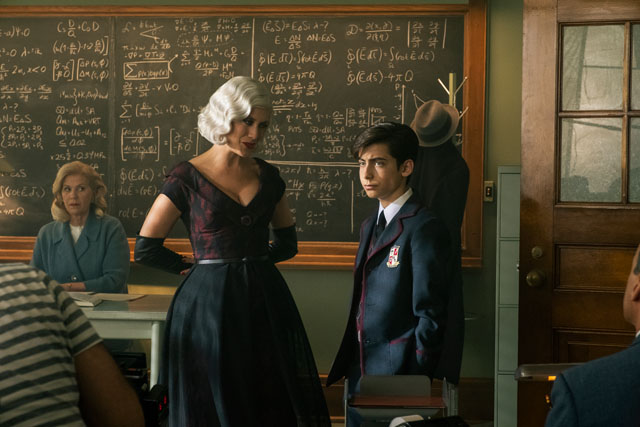 The Handler with Number 5 at The Commission's headquarters

The pilot episode nosedives into the tragedy that reunites the six remaining Hargreeves children—the death of their adoptive father Reginald Hargreeves, who gathered and trained these seven superpowered children. The siblings are just seven of 43 children who were born on the same day in 1989, to women who were not pregnant when the day began. These children go by their human names but were also given numbered code names by their father: Luther (Number 1), Diego (Number 2), Allison (Number 3), Klaus (Number 4), Number 5, Ben (Number 6), and Vanya (Number 7). 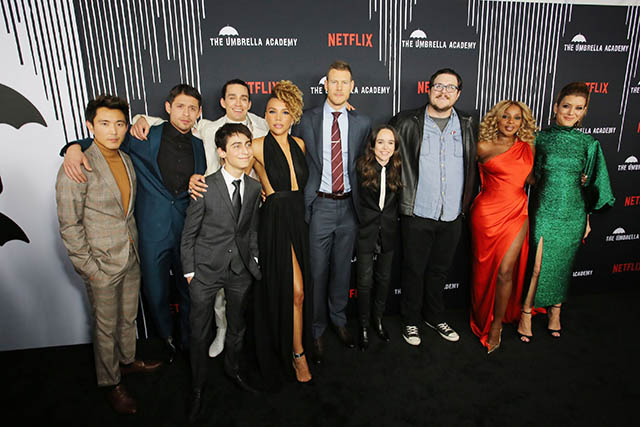 The dysfunctional family members try to make sense of their father’s passing, but they’re also faced with an imminent apocalypse, as witnessed by the time-traveling Number 5.

As the season rolls out, audiences learn more about the relationships of the siblings and how their flawed upbringing made them who they are, powers or none.

Not much explanation is offered as to where these children came from, who their father is, and what he’s training the group he has christened “The Umbrella Academy” for. Showrunner Steve Blackman seems to have thrown all rationality out the window to create his vision for the show. Much of the group’s past is told in the form of flashbacks. The 10-episode season might irk a few skeptics, but one will have to remember that the show is loosely based on a graphic novel of the same name. 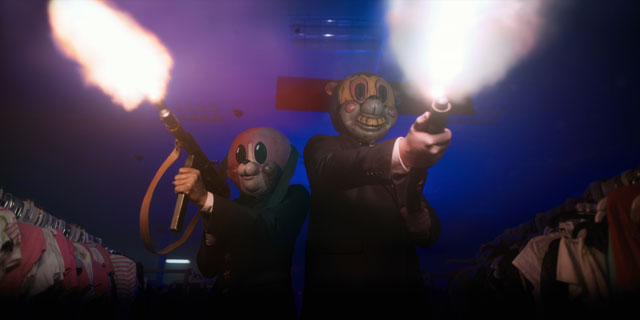 Cha-Cha and Hazel wage war against The Umbrella Academy

With that premise, the show could afford to be wild and as nonsensical as the comic book series, written by My Chemical Romance frontman Gerard Way and illustrated by Gabriel Bá. Instead, it takes a step back and tones down the characters’ abilities and the plot to make way for a more humanistic approach to supers at a time when audiences are enamored with these supernatural beings. Mr. Hargreeves' monocle does not possess any powers, Klaus does not levitate, and the villainous Conductor is replaced by Leonard Peabody, to cite a few differences between the show and the source material.

“[Blackman] just wanted to take out some of the fantastical elements that would de-humanize the characters,” Sheehan said. “He wanted to make them as human, and as f*ck-ups as he could so that people will know that they’re watching people, they’re not watching the Avengers with capes. That’s not the show. The show is human beings first and “superheroes” a distant second.” 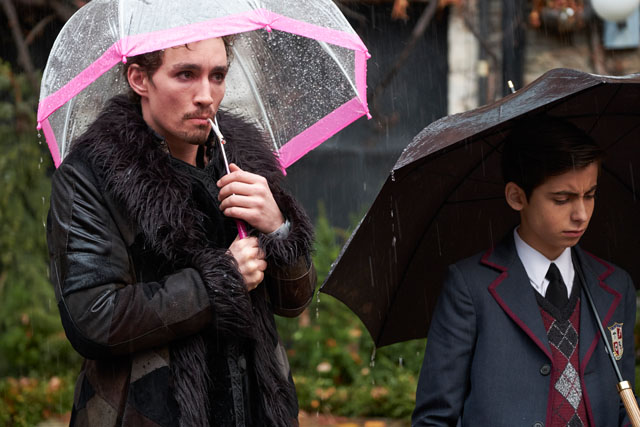 Robert Sheehan plays Klaus and Aidan Gallagher as Number 5, the former has the ability to communicate with the dead while the latter can teleport and travel through time.

Whether or not you’ve read the comic book series, the first season of The Umbrella Academy has all the addictive qualities of a television series. By focusing on the history of each character per episode—as hinted by the episode’s title—the script the information it gives out. There’s also the box of secrets that Reginald Hargreeves left for his children to unpack. While it might have been an ingenious way to hook the audience, some critics are not big fans of the pacing.

If you power through the season, however, you’ll find this treatment is essential for each character—and if you count hitmen Hazel and Cha-Cha, there are quite a number of them—to have ample screen time. Each member of the Academy evolves in some way before the season ender, “The White Violin.” 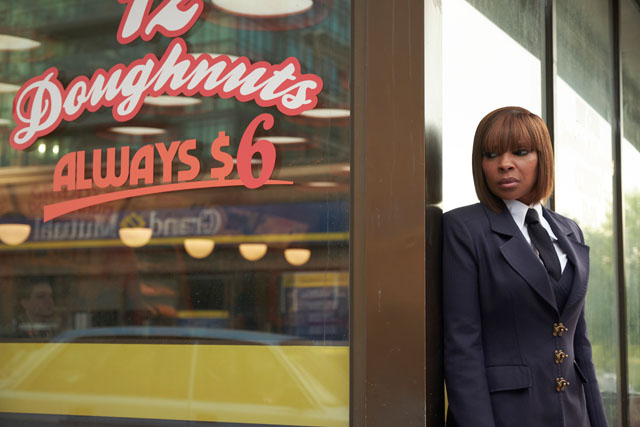 Mary J. Blige plays Cha-Cha, one of two assassins hired by a time-controlling agency called The Commission to stop Number Five from preventing the apocalypse.

As they learn to work through their baggage, the Academy also learns to overcome extraordinary challenges together. True enough, the family drama takes precedence over the apocalyptic mission.

“Underneath it all, there’s a lot of love between all of the siblings,” said Castañeda. 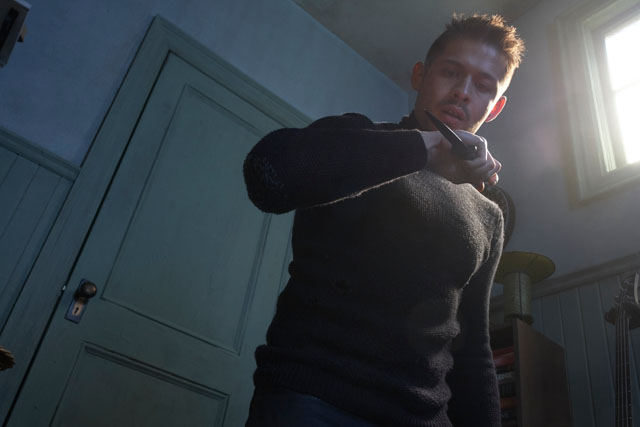 David Castañeda as Diego or Number 2

When asked what he thought the show’s greatest takeaway was, Sheehan said: “It’s okay to fail. In fact, failure is absolutely necessary for success. You have to fail to know which way to go.” Fortunately for this series, fail it did not.

Watch The Umbrella Academy on Netflix.com/umbrellacademy. 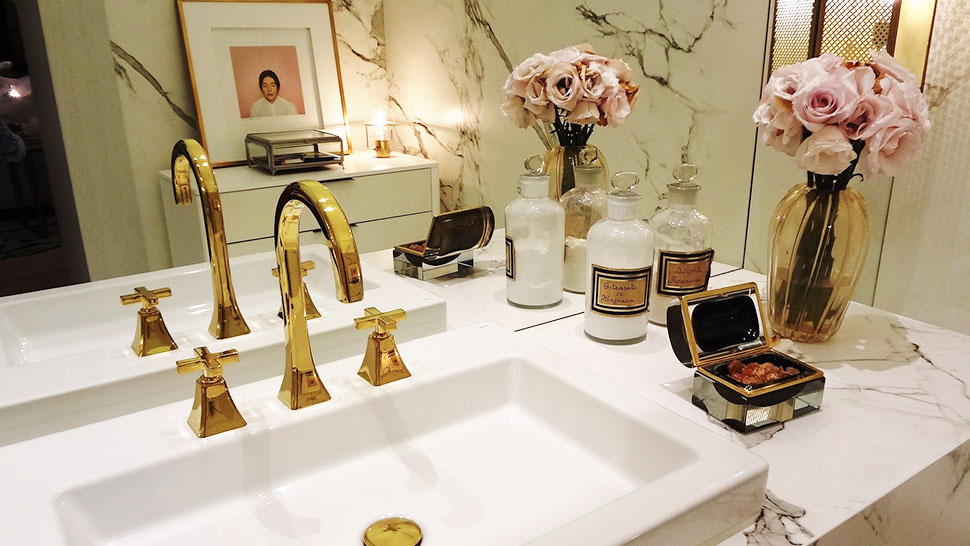