This Tagaytay Hotel on a Ridge Is the Perfect Holiday Getaway

Great design, hearty dishes, and one heck of a view come together at this stunning weekend destination. 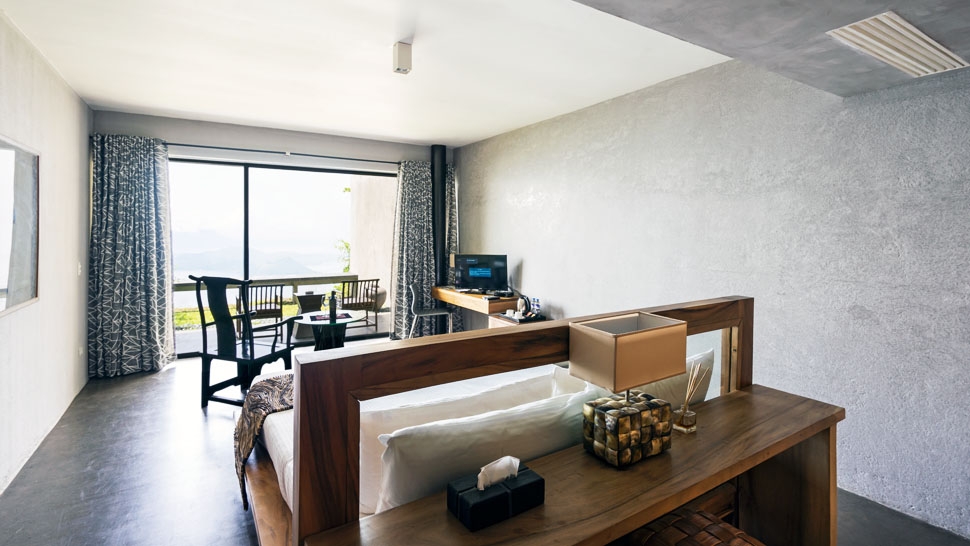 One of his trips abroad, home accessories designer Rene Alcala had an epiphany. The self-described late comer to the award-winning Movement 8 design collective was staying at a boutique hotel in Europe along with some of his fellow designers and exporters when he mentioned that it must be nice to have something like it. “We were in an eight-room corner hotel. It was an old place but very elegant. [Architect and furniture designer] Milo Naval had a look around and said it wouldn’t be difficult to run something similar back home.” It was the start of a dream.

Fulfilling it took many years, but the dream was realized when Domicillo Design Hotel opened its doors—even though it wasn’t quite complete—in December 2014. The hotel’s first dining establishment, the Spanish-Filipino restaurant La Finca, opened a few months later, followed by the Japanese restaurant Aozora. 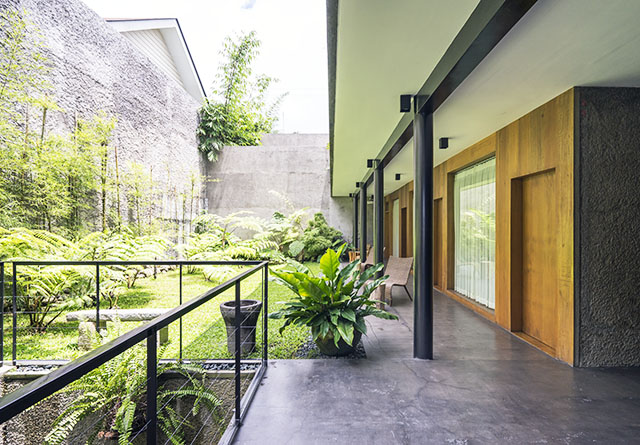 Views of the garden 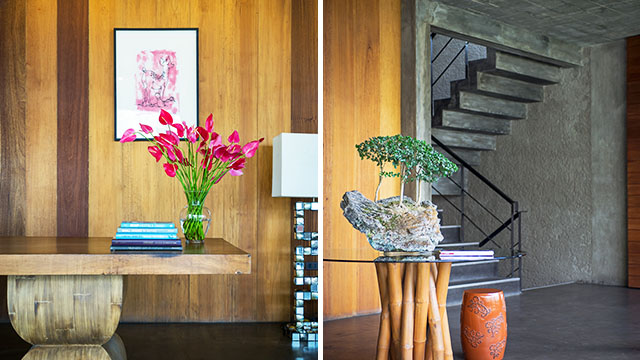 A bonsai plant adds a nice touch to the foyer.

Designed by Budji Layug, a founding member of Movement 8, the four-story hotel is a marvel of wood, concrete, steel, and glass. Built on a 1,000-square-meter lot, the structure appears light, spacious, and airy, seemingly afloat as it hugs the land’s steeply sloping contour. There’s a logical flow to the layout: from the parking area out front you descend a few steps to enter the reception area, which doubles as a gift shop; a few steps forward to the left bring you to La Finca’s dining room, the nicely appointed public lounge is on the right. From either space, open the sliding doors and you’ll be out on a small deck overlooking Taal lake. To access the other levels, trace your way back to the main staircase, just past the foyer. Upstairs you’ll find the Japanese restaurant and the expansive open deck. One flight down are five guest rooms: two, designed by Milo Naval, with a view of the lake, and three by Tes Pasola facing a charming garden. Another level down are the three Premiere rooms by Layug, all looking out to the volcano and each with the added perk of having its own pocket garden. Alcala sees another advantage to this set of rooms. “Being on the lowest level, there’s an added layer of privacy. If you’re staying the weekend with your family, it’s a good idea to book these three rooms. It’s like you have a little house because there’s a private lobby area, plus a central tropical garden. It’s all yours,” he offers. 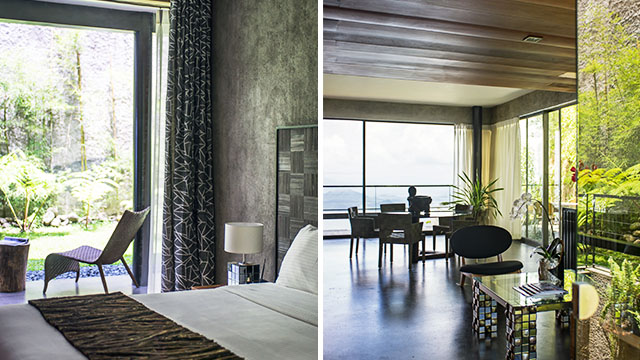 The Premiere room opens up to a pocket garden and a view of Taal. 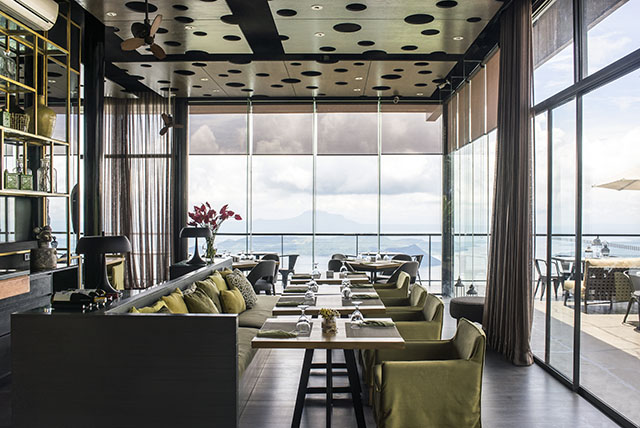 More than its desirable location on the “happening” side of the ridge, the hotel’s big draw, in Alcala’s eyes, is its ambience, inside and out. “If you are design-inclined, everywhere you look, there are conversation pieces. Budji says the problem is that we have to edit. It might be design overload to some people, but to those who are familiar with the Philippine design world, it’s a delight to the senses.” To understand what he means, just have a peek in any of the hotel’s rooms or open spaces. There’s furniture by Milo Naval, Kenneth Cobonpue, Ann Pamintuan, and Eric Paras. Art by RM de Leon and Jonathan Olazo. Accent pieces by Tes Pasola, Tony Gonzales, and Maricris Brias, among others. Not to mention the interior and architectural design by Layug and Royal Pineda. A mishmash of work by local design-world luminaries, the hotel’s totality of design somehow manages to stay coherent. When asked, Alcala flatly denies that he intended the hotel to be a showcase for Movement 8 members’ designs, but concedes it just ended up being that way. “When I was talking to them while I was drawing up the plans for the hotel, they all volunteered. ‘I’ll do this, I’ll do that,’ they all said. I guess that’s how it is when you are in a group. You try to help each other. So it’s become a conundrum of things. But it clicked!”

Taking almost three years to build, the hotel’s completed design is bigger than what Alcala originally had in mind (“It used to be four rooms, then six, then nine.”), thanks to Layug’s prodding. It would’ve been a waste of space, justifies the veteran interior designer, and “besides, four rooms wouldn’t be sustainable.” Speaking more about the design considerations, Layug reveals, “Paramount of all was that we don’t destroy the view. Conceptually, I wanted to get the volcanic feel, the organic feel of Tagaytay, and to bring that feeling into the design of the space. We took advantage of creating with very gray tones, concrete, and wood. We didn’t want to block the view, we want you to appreciate it from all levels and from most of the rooms.” Helping set-up the hotel’s intimate, organic feel are the various gardens dotting the open spaces, from the entrance down to the one on the lower level, dramatically lit by a skylight. “The atmosphere is very important,” says Alcala. As if on cue, Layug jumps in. “The main garden, for example, complements the whole architectural design. It’s very minimal, but it’s a strong composition. Even with very minimal things, you can create the atmosphere that’s peaceful, very serene. You can’t go wrong when you work with nature.” 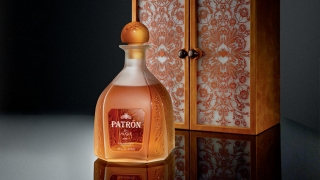 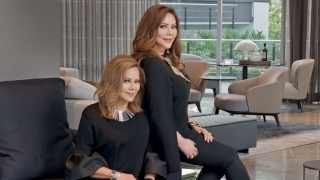