Before anything else, congratulations are in order. You’ve done it; this is the moment you’ve been waiting for, the purchase you’ve been dreaming of since you first set out to earn your own salary. You’ve just bought yourself a shiny new sports car. But as a wise man once said: Mo’ money, mo’ problems. Owning a sports car in a place like Metro Manila can be baffling, if not only occasionally difficult. How do you make the most out of such a beautiful machine? It’s certainly one thing to take it out for a drive, but here, you can’t expect to do much more than sit in traffic. Surely, now that you’ve ascended into sports car owner status, you’ll want to experience pure driving bliss when you take it out of the garage.

So if you’re going to take your new metal out around the metro, make sure you get the most satisfaction by following these tips:

Be an early riser.

You bought yourself a sports car, not an air-conditioned lounge parked in the middle of EDSA. The reality of Metro Manila traffic can be a major wet blanket when all you really want to do is shoot the wind in your dream machine.

One way to avoid traffic common among sports car owners—and among anyone hitting the roads, for that matter—is to get up bright and early, before that sea of red taillights starts to form everywhere. A good cruise is always the best way to start your day.

A sports car is going to feel completely different from a sedan when you’ve finally lowered yourself into the seat and gotten your hands on the wheel. The speed and acceleration are so impressive that making the switch from regular car feels like going from running in quicksand to going barefoot on a feather-lined track oval. And we haven’t even gotten to the part about the power and momentum you’ll be feeling and the amount of control you’ll be getting over your ride.

Needless to say, it takes some getting used to before you can fully enjoy all that power. Drive it as much as you can, and you’ll be tearing up the roads like it’s second nature.

Sports cars are designed for roads, not the moon—so avoid very deep craters and the like at all costs. Your vehicle is likely to have a lower carriage and a more rigid chassis than most, which means driving over potholes can cause more damage than normal. While your chariot will likely tough it out, it's better to be safe than sorry.

It’s usually a good idea, then, to take your car out for a spin in areas where the streets aren’t plagued by Metro Manila’s omnipresent potholes. Bonifacio Global City is a popular option in the city—all those sports cars lined up around Burgos Circle are proof of that. If you plan to take it out, Sta. Rosa, Laguna and Clark, Pampanga are excellent places to go cruising, due in large part to their well-maintained roads.

Sometimes, the best way to master your shiny new car—from maintaining it to taking it out to breathe—is to learn from someone else. Nearly all sports cars available in the local market have clubs for people who share the same model. Joining one gives you access to tips and knowledge only more experienced owners would be tuned into. It’s sort of like having an entire squad of Mr. Miyagis telling you “Wax on, wax off.”

Take it for a spin on an actual race track.

It’s funny how so many people seem to forget the most obvious fact about sports cars: They’re built for sport. Sure, they look great parked outside a club, but that’s a massive underutilization of a perfectly engineered machine. If you really want to know what your baby’s made of, let it loose on a race track.

There’s nothing quite like the thrill of driving a finely tuned sports car with nothing but a wide-open track in front of you. It’s the kind of rush that’ll get you hooked—fast. If you want to give it a shot (and you really should), you can book a slot at the Clark International Speedway in Pampanga.

Pick the one for you.

There are a lot of models out there, and each one has something unique to offer. If you’re looking for one that gives you the thrill of driving virtually anywhere you go, however, you might want to check out the all-new Toyota GR Supra.

The legendary model has finally come back after a 17-year absence, and it’s better than ever. From its sexy, bullet-shaped silhouette to its fluid accent lines, the Supra looks every bit the part of a trophy car. What pushes it over the top, however, is its performance.

Its twin-scroll turbocharged six-cylinder engine produces a maximum output of 335 horsepower and 500 Nm of torque, giving you incredible top speeds with zippy acceleration. The front and rear are designed with a perfectly balanced 50:50 weight ratio, which is essential for extra-precise handling. With its highly sophisticated Adaptive Variable Suspension system, your ride is as smooth as freshly pressed glass. All this was developed under the watchful eye of Toyota’s Gazoo Racing arm, which tested the Supra in grueling performance conditions on roads across the globe. 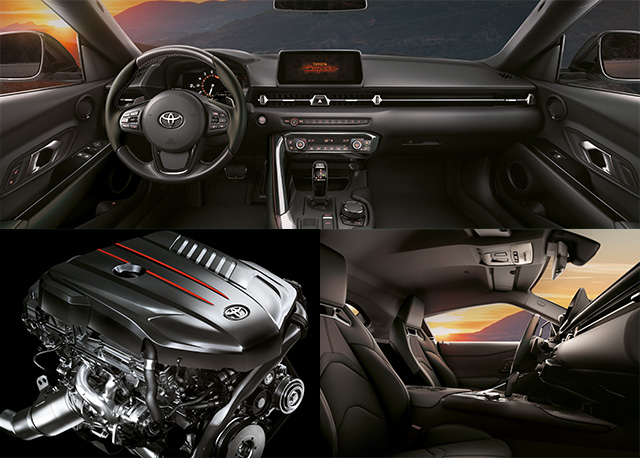 And while you’re probably going to take good care of it, the Toyota GR Supra also comes with assured care and maintenance in the country, courtesy of 16 certified GR Performance dealers who are trained and equipped specifically to service the vehicle.

Now that you know how to make the most of a sports car like the Supra, head to the nearest certified GR Performance dealership today to get your hands on your next favorite toy.

You can find these dealerships in Alabang, Commonwealth, Makati, Manila Bay, Otis, Pasong Tamo, and Quezon City in Metro Manila. Those elsewhere in Luzon will be able see it in the metal in Toyota's Bacoor, Batangas, Calamba, La Union, San Fernando, and San Pablo. In Visayas and Mindanao, you'll find the GR Supra in Cebu, Mabolo, and Davao.

For more information on the all-new Toyota GR Supra and where to find it, visit this link.