The Final Episode of Anthony Bourdain: Parts Unknown Explores the Gritty Past That Made the World's Greatest Traveler

The drugs, art, and punk of Lower East Side defined the late writer and chef.

A month after Anthony Bourdain died of suicide this summer, street artist Bradley Theodore unveiled a mural of the iconic traveler in the Lower East Side on Delancey and Ludlow streets. In a post on Instagram, Theodore wrote the caption: "In a city full of villains we all need heroes."

On that corner is a Duane Reade and a Bank of America. It's across the street from Hotel Chantelle, a three-floor nightclub/four-star restaurant. That corner, where Bourdain's likeness watched the tourists and Ubers and wealthy collage kids pass by—was nothing like the Lower East Side of the late-host's wilder days. Back then, during Bourdain's formative years in the city, it was home to punks and brave artists, to drug addicts and murderers.

That time is the focus of the final episode of Anthony Bourdain: Parts Unknown, an hour of television that tells the story of the legendary chef and author's influences, friends, and heroes. And it's only fitting—even depressingly poetic—that Bourdain's final show, his unfinished travel story, is about the man himself. It looks unflinchingly at his days as a drug addict chef in New York and juxtaposes it beautifully with the Lower East Side of today—and Bourdain's celebrity life as a successful TV host living dozens of streets uptown. It's a true American story, it's Bourdain's story—not beautiful, not perfect, but unforgettable. 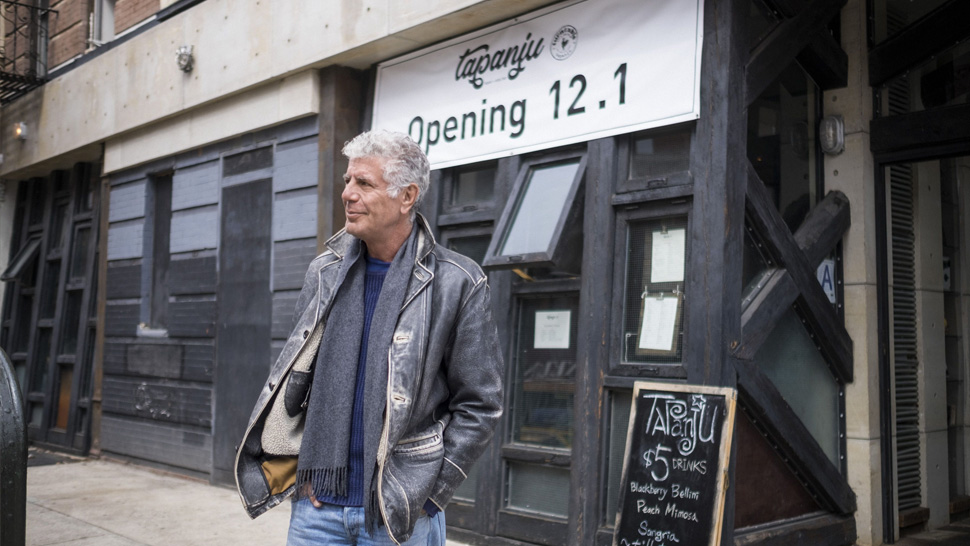 The final episode of Parts Unknown is a tribute to the artists and rockers who influenced and inspired him. IMAGE: David Scott Holloway

The episode opens with Bourdain casually pointing out the areas where he used to buy drugs, where there were holes in the wall and alleyways even he wouldn't go down. What follows is a journey through the streets that defined Bourdain's gonzo lifestyle. It's a tribute to the artists and rockers who influenced and inspired him.

In a scratch voiceover, Bourdain explains the importance of the old neighborhood he haunted. "This is a show about a very special place. A very special time. The Lower East Side was in many ways the cradle of New York," he says, clearing his throat. "Where new arrivals settled, built communities, and moved on, only to be replaced by others."

This is the story of those others, the story of who and what shaped Bourdain when we first got to know him in his 2000 book, Kitchen Confidential. In many ways, Bourdain reflects on that man, who somehow fought his way out of these slummy streets to eventually become the executive chef at Les Halles, serving fancy French fare to suits in the Financial District. 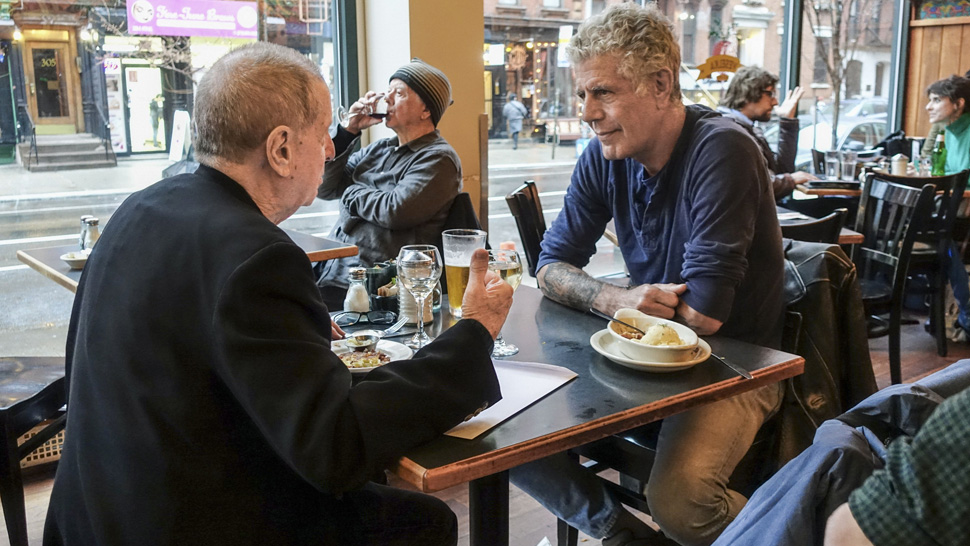 Anthony Bourdain fans would know that the chef/host's fondness for punk rock was the pulsing artery of his entire career. IMAGE: CNN

He notes, at one point, while looking at a collection of vintage dope bags, that he never lived in the Lower East Side—he only went there for the music and to score drugs. As such, iconic figures who survived the era make appearances in the episode. There's rock industry exec Danny Fields, punk rock pioneer Richard Hell of the Voidoids, artist Joe Coleman, hip-hop legend Fab Five Freddy, and Debbie Harry and Chris Stein of Blondie.

Anyone who's seen more than a handful of Bourdain episodes knows that his fondness for punk rock was the pulsing artery of his entire career. From the rock music of his various opening themes, to his unforgettable interviews with Iggy Pop, Alice Cooper, Josh Homme (who composed Bourdain's music), The Black Keys, Questlove, Alison Mosshart, and many more—music was the driving force behind Bourdain's art. It set the rhythm for his iconic voice overs, the tempo for his syntax. Here, he digs up names everyone remembers, along with others that have faded with time (though not to Bourdain).

What's striking about this episode is that it could only have been made by Anthony Bourdain—it's a look at a familiar place through his particular perspective. So often, when traveling abroad or even in unfamiliar places in the U.S., he'd consult experts in the area for ideas about where to travel and who to talk to and where to eat. In this episode, Bourdain is the expert; although he's interviewing the artists and punks and poets of his past, he's as much a character in this story. He's so intertwined with this place that it speaks to his past and present simultaneously, in some sort of harmonious loop of time. He's at once the man who wrote about snorting cocaine off a bar through penne noodles and the world-weary TV personality and father.

At one point during the interview with Harry and Stein, Bourdain connects their support of the '70s and '80s LES music community with the popular music of today. Back then, Blondie often commissioned Fab Five Freddy's artwork and propped up the then-burgeoning art of hip-hop. Freddy points out that Harry and Stein were among the first people to commission his street art for Blondie videos. As Bourdain notes, they played a small role in legitimizing what's now the most popular form of music in the world. At another point, Bourdain gets nostalgic, putting on his reading glasses to look at a LES photographer Clayton Patterson's collection of vintage dope bags. "You know you're doing something bad when you bought a product called Toilet and shot it into your arm," he says. "Oh man. Memories." 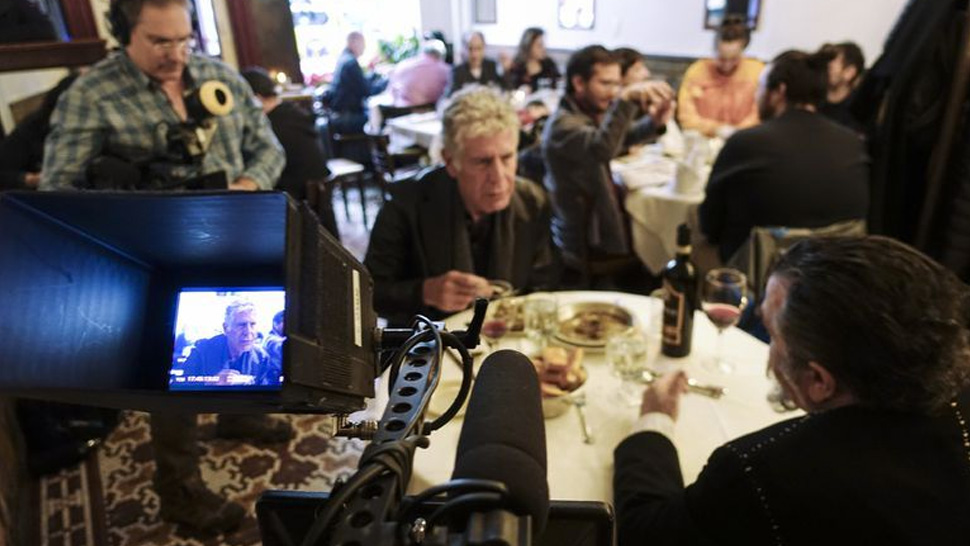 The episode is imperfect, but that's what makes it so Anthony Bourdain. IMAGE: CNN

Afterward, the two talk about the gentrification of the neighborhood after the Tompkins Square Park riots. Patterson explains that gentrification is inhibiting the whole concept of the American dream. "You have to now make a huge amount of money to be here. They have huge skyscrapers in midtown that are sold as million dollar apartments and nobody lives in them."

"I live in one of those skyscrapers," Bourdain tells Patterson, before asking if that's all that's going to be left of New York some day. Such is the dichotomy of Bourdain as the celebrity success story. At points in his career, local foodies would beg Bourdain not to reveal the locations of their favorite neighborhood spots in fear that it would destroy what made them special. Becoming a renowned chef, writer, and TV personality, Bourdain effectively separated himself from the real stories he spent his life trying to tell. There's a moment at a diner with Freddy when Bourdain is glowing, talking about a diner that has remained the same for 45 years. He at once cherished cultural preservation and championed progress. He knew the two couldn't go hand in hand, and that conflict would have its discontent.

This isn't a flawless episode of Anthony Bourdain: Parts Unknown. How could there be? It's incomplete, it's rough around the edges like the man himself. And, as such, it's perfect. It's true to who Bourdain was, what made him passionate, what inspired his own two decades of art. Even without Bourdain's voiceover driving things into a nice package, drawing all the pieces together into sound themes. It still tells the story of a man who once scored drugs in the Lower East Side to get through his grueling job as a line cook and a man who returned decades later to reflect with the artists and punks and poets about how they changed the world.