The insatiable craving at the heart of the Netflix thriller is unpacked by its Korean stars.

Of course Kingdom has zombies, but the latest Netflix scarefest is more than just a horde of supernaturals who refuse to die.

As its stars and creatives expressed during its launch in Seoul, the show carries a distinct flavor and, more important, possesses a theme that sets it apart from the scores of zombie entertainment that has flooded screens since Night of the Living Dead popularized the eat-your-brraains genre in 1968.

If you haven't seen the show yet, here’s a loose take on its plot: Prince flees palace to seek truth about king's mysterious illness, and stumbles upon a plague, which is, duh, zombies. Dad turns out to be infected. Fun times.

Kingdom combines the stillness of the east with the frenzy of the west.

Of note, this is a Korean production, the first Korean Netflix original series, in fact, and while yes, we've just been blessed with a Korean tale of zombie apocalypse care of 2016's Train to Busan, Kingdom feels fresh because it is set against the backdrop of the Joseon Dynasty sometime in the 16th century. (Train is set on, well, a train.)

And then there are the zombies. 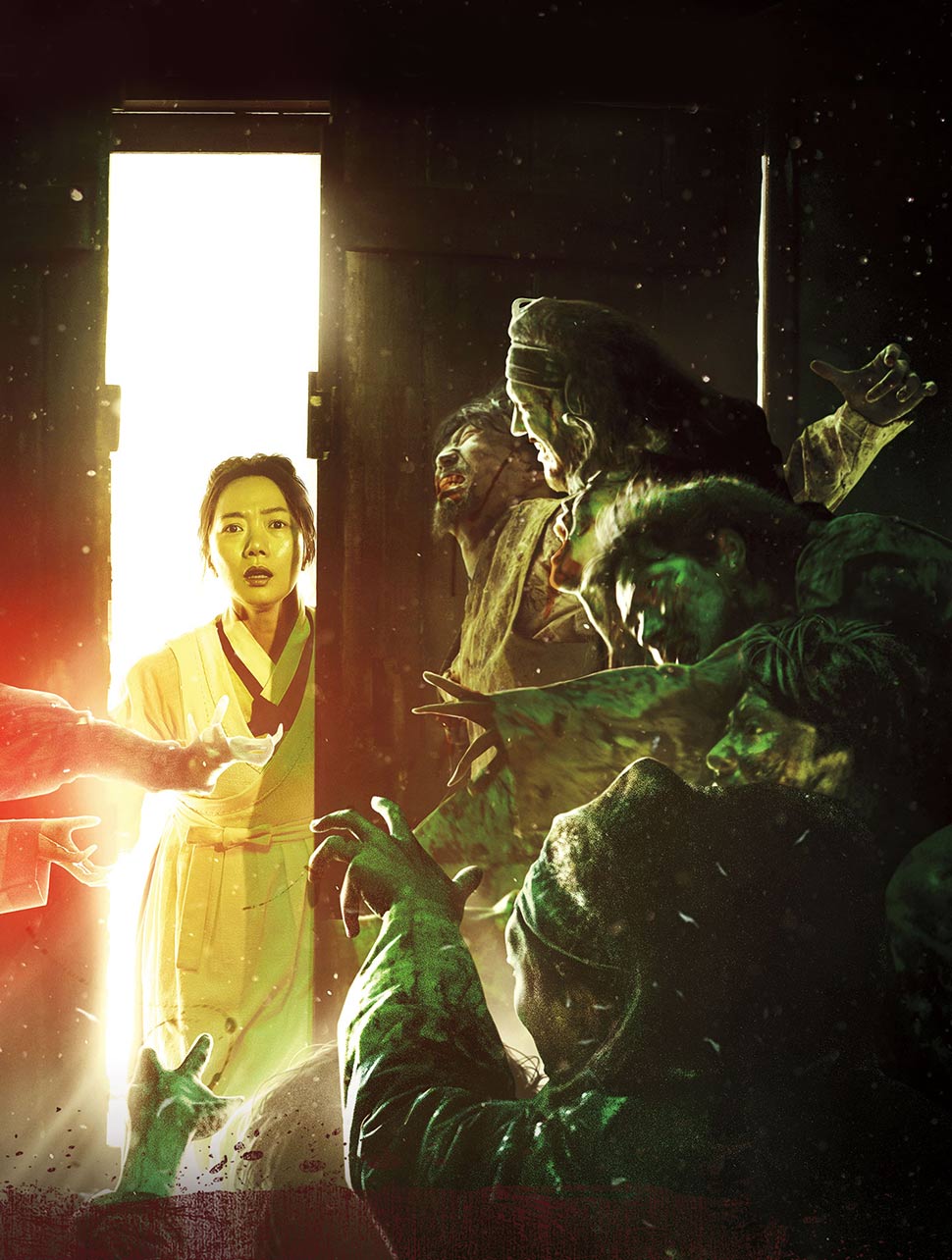 That idea alone is the hook: a period drama with the undead (Pride and Prejudice and Zombies does not count) or, more specifically, as Ryu Seung-ryong, who plays state councilor and very bad guy Cho Hak-ju, described, “There is the beauty of Korea and the concept from the west.”

Director Kim Seong-hun, in a roundtable interview, echoed the statement, pointing out how the series is a collision of two different worlds, Korea's “calm beauty combined with Western dynamism.”

“I think that combination can bring about entertainment as well as a certain level of irony,” he added. This intriguing proposition of zombies and palaces will make you want to hit play on screen.

Kingdom is about insatiable hunger.

Beyond the stylish concept, writer Kim Eunhee wanted to zero in on the hunger that is at Kingdom's core.

On the surface, this hunger manifests itself in the constant craving of the undead, whose sole motivation is to eat somebody not dead, a state the writer poignantly described as a kind of sadness. 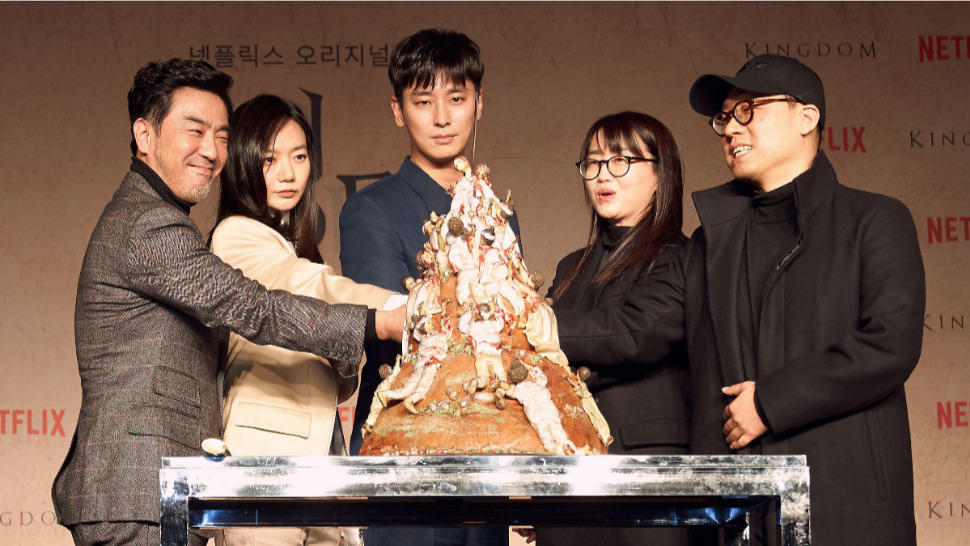 CONTINUE READING BELOW
Recommended Videos
The best way to cut a cake shaped after zombies feasting on a hapless human is with a sword. IMAGE: Netflix

This idea can also be unpacked in two ways: The very poor subjects of the kingdom in Kingdom are obviously hungry for food, while the nobles, specifically the state councilor and his daughter, the queen, are hungry for power. Both will stop at nothing to get what they want, and their blind desires lead to disaster.

Kingdom presents an original take on the origin of zombies.

It’s not wrong to think that the series mirrors what is happening in the world right now. “I think, with Kingdom, if you remove the zombies, its still tells the story of humans,” remarked its writer.

During the early stages of conceptualizing Kingdom, Kim Eunhee scribbled the words “What is politics?” on a white board in her office. She wanted to tell the story of people who are greedy for power, and how their hunger affects all. 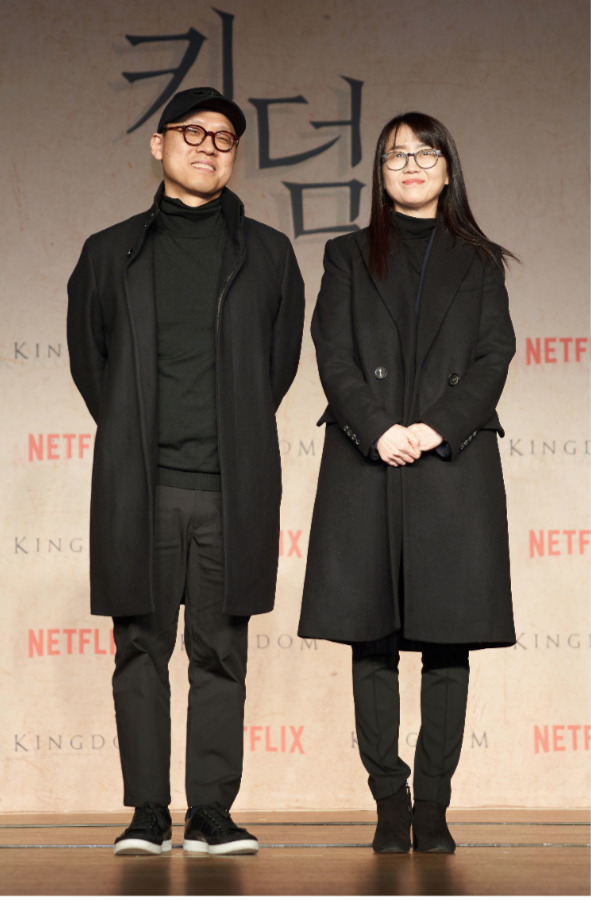 The writer admitted she’s not sure how successful she was in her goal—it may be too much to realize her point when you’re just seeking a late-night thrill—but hunger is a clear through-line in the series.

The greedy nobles have left their subjects in a state of destitution, and it is implied that these unfortunates have turned to eating the flesh of dead to survive. No need to tell you how these events usually leads to a zombie plague.

Now, a spoiler warning (but really, the tidbit ahead can be deduced in the stunning opening credits of the show): The series reveals that the king is patient zero, the source of the zombie plague. Because the state councilor refuses to give the crown to the prince, he tasks a physician to revive the dead king. The remedy, a rare purple flower, brings the king back to life, but, oops, he's now a monster.

Its zombie actors make the show.

Show notes describe the main leads—Ju Ji-hoon as prince Lee Chang, Bae Doona as the physican who may hold the cure to the plague, and Ryu Seung-ryong's state councilor—as a “10 million trio” (their movies have sold more than 10 million tickets), but the actors pointed out how it was the background players, the zombies, who made the show work.

Bae Doona, in fact, remarked on the elaborate way the 40 or so zombie actors contort their bodies to portray the undead horde. 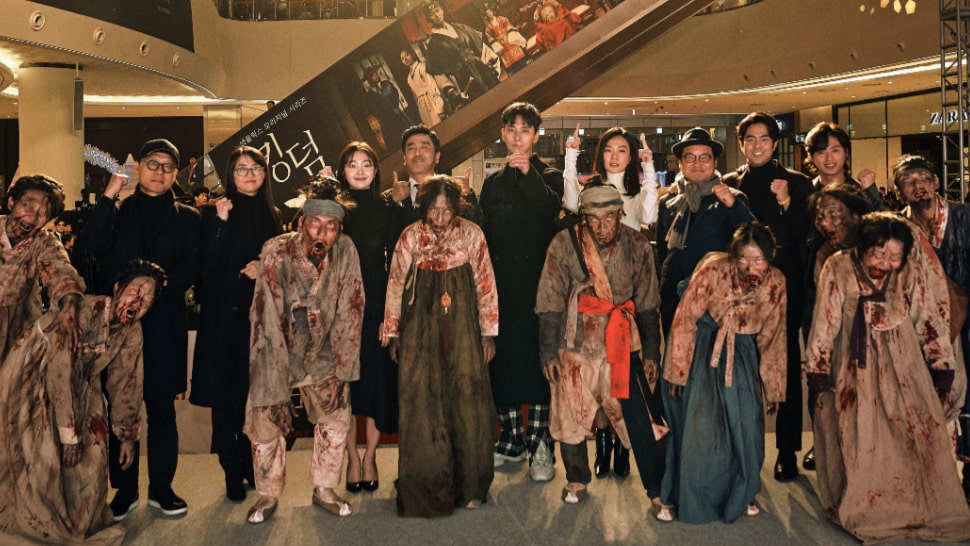 Just a family photo with everyone in the show, including some of the very important zombies who are creepy both on- and off-screen IMAGE: Netflix

And trust us, too, when we say that these actors, who trained for two months to become proper zombies, deserve an Oscar for Best Creepers. Not only did we see them at work on the screen, we also had the pleasure of being scared in person as a gang of zombies littered the hallways of the presentation. (They were also game for selfies.)

If you only want to be engulfed in fear (never mind the meaning!), the show delivers. We admit that we yelped like a puppy when the king's withered hand snatched a servant into his chamber. And the actors themselves, though fully aware that this is all make-believe, had their moments of being terrified, too.

Ju Ji-hoon pointed to the scene where he hid in the palace and then encountered a strange shadow growing larger and larger. 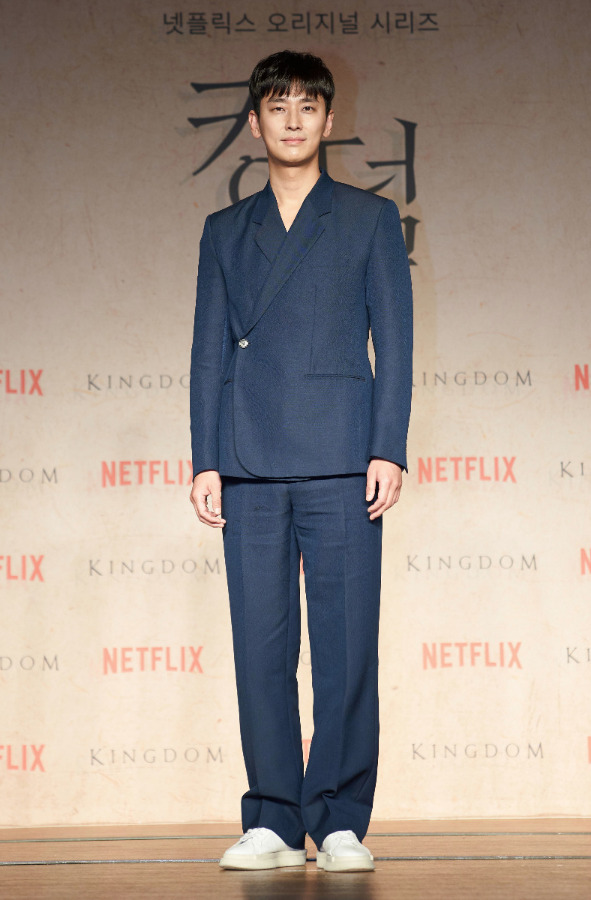 Bae Doona offered that time when she was shooting in a confined space. “The character Sobi wasn’t afraid, but I was very afraid. There's a scene where I was in a prison cell and all the zombies were surrounding me. I constantly thought these [bars] are going to break any second now,” she said.

Ryu Seung-ryong described a moment with the zombie king came right up to his face. “I had to play a role that didn’t flinch, right? But I almost peed my pants,” he revealed.

When Esquire asked why zombie shows have a such a hold on audiences today, writer Kim Eunhee ascribed it to tension or nervousness, while director Kim Seong-hun flipped the script, pointing to the satisfaction of slaughtering the undead.

He spoke of that feeling of killing an enemy in a video game. You feel pleasure but also guilt because you just gunned to death or hacked to pieces a virtual human being. “When we are given the storyline to attack monsters or zombies, it takes away the sense of guilt, and only gives pleasure,” he said.

The series possesses that Korean magic

One more thing that makes Kingdom appealing is the fact that is a Korean production. Esquire asked the cast why they think Korean shows are so popular around the world, and Ryu Seung-ryong turned to the popularity of K-pop, as well as the “certain power” and the “very exciting spirit” that characterizes Korean content.

Bae Doona likened the appeal of Korean productions, Kingdom specifically, to the country's traditional food. “We have a saying in Korea: 'We prepare so much food so that the table legs are about to break,'” she described. 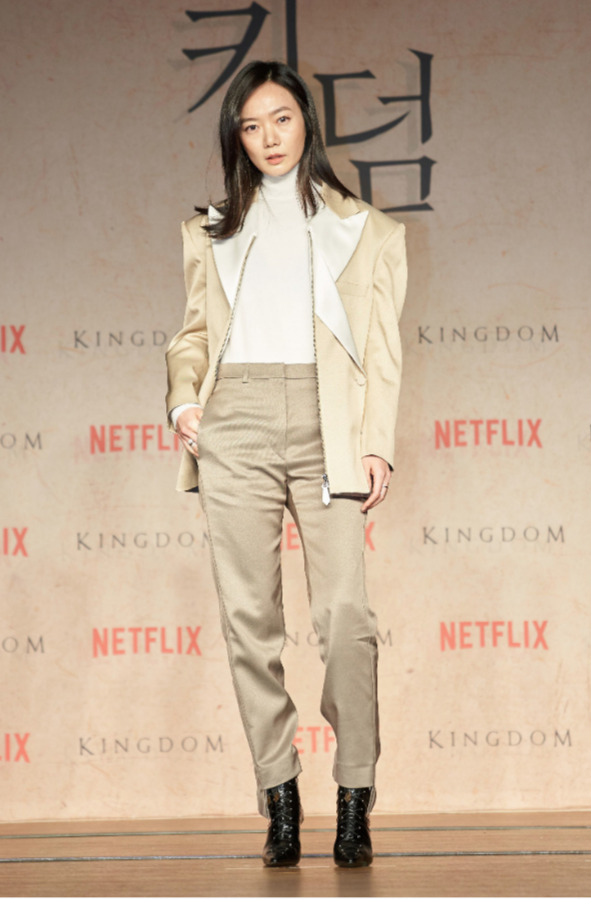 Actress Bae Doona likens the popularity of Korean shows to traditional Korean food: "Everyone can find something that they like." IMAGE: Netflix

If you order, for example, kimchi stew at a Korean restaurant, expect also a host of side dishes to arrive with the hot pot. Likewise, Korean content has many different parts.

“There are some things that are very exciting, which can be compared to a main dish. You have some comical elements, something sad, a little bit of a love story, and some action scenes. There's also thriller,” she said of Kingdom. “I think it has that kind of charm where everyone can find something they like.”

(As befits a prince and the main star of the show, Ju Ji-hoon doesn't know why Korean series are popular because “I don't watch a lot of TV." Welp.)

So, whether you're just looking for a stylish scare or are in the mood to decipher how Joseon-era zombies are a mirror of present society, the series has you covered. Kingdom, the story of zombies, a plague, and a prince, will fill you up.

1| Writer Kim Eunhee came up with this strange idea many years ago. That it took a while to come to fruition is for the better, as Netflix allowed Kingdom to unfold as it wanted. Strict Korean broadcasters would have censored many things.

2| By standards of Korean drama, there is a drought of romance here, and that is because its writer is not a fan of love. When she and her friend, Kim Eun-sook (the writer of that other Korean mega-hit, Goblin) looks at a man and a woman standing together, Eun-sook thinks of when they will kiss, but she thinks of who will kill who. 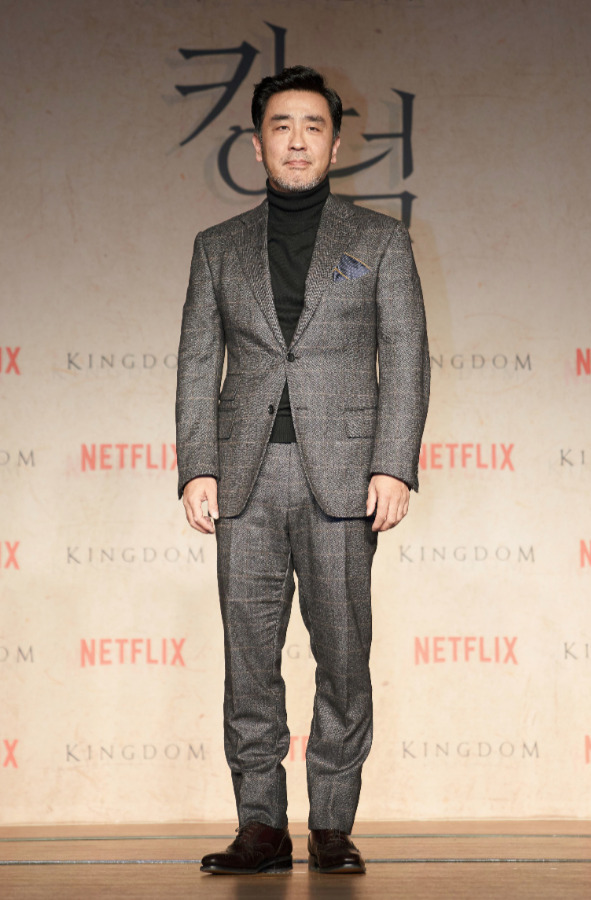 3| The six-episode format allows Kingdom to be both fast-paced like a series and dense like a movie. The length gives enough room for the series to explore its zombies origin story, something that other undead shows do not really explain.

4| Kingdom is highly binge-watchable, but beware. Watching the beautiful gore for hours on end gave us a headache.

5| That season ender will leave you wanting. “We thought six [episodes] is the right number to create right expectation,” said its director. Its writer added, “You might feel frustrated, but we made sure to reveal what we wanted.” Season one is characterized as a road trip, the journey of the prince from palace to plague, and where it finally ends up is just too much of a cliffhanger. The next season has been greenlit.

Kingdom is now streaming on Netflix.

Bond 25 Is Very Probably Shooting In Norway, According To Leaks

Will Michael B. Jordan Return For Black Panther 2?
All Photos
Comments
View As List