Because You Asked, Here are Victor Magtanggol's Most Striking Moments

Seven weeks after its premiere, Victor Magtanggol has gone on to carry the torch for the telefantasya genre on its home network. Much has been said about the show’s use of Norse mythology as narrative backbone and how the creators have struggled to explain how different it is from another more popular Norse-based comic book hero. After thirty five episodes, has Victor Magtanggol--and his alter-ego Hammerman--made any sort of significant impact on the avid superhero-loving Pinoy?

Narrated by Magni, one of Thor’s sons, the show’s opening prologue has the ambitions of matching the grandeur of Galadriel’s prologue from Lord of the Rings, but it’s very obvious that the effects budget isn’t up to the task. At least, it successfully compresses Victor Magtanggol’s Norse-derived backstory under seven minutes and fills it with epic action that begins with a cosmic view of Yggdrasil which then zooms in to the on-the-ground battle on Asgard. The computer-generated opening battle is impressive by local TV standards. It's all primarily a setup for the show’s much-defended narrative conceit. Thor dies in battle while defeating Loki and his forces. Asgard lies in ruins because of what seems to be massive splash damage from the legendary Mjolnir. It all happened a long time ago, Magni (Miguel Faustmann) wasn’t very specific with the timeframe as he was narrating the events with the gravitas of a veteran Repertory theater actor.

Perhaps taking the bagong bayani moniker for overseas Filipino workers too literally, the titular Victor Magtanggol (Alden Richards) leaves for Canada to work as a lowly maintenance worker and occasional waiter at a museum. Magni, hiding in plain sight as a museum director and Victor’s boss, sees potential in the good-natured Pinoy with a boy-next-door charm.  After fending off the advances of a middle-aged lady, Victor sets off his hero’s journey in finding Thor’s items. First of the items to be bequeathed to him is an ancient compass which points him to the direction of a pair of Járngreipr, the mythical gauntlets used by Thor to wield Mjolnir. The show offers loosely-adapted Eddic trivia on title cards  to keep the audience informed about unfamiliar Norse terms. Props to the writers who thought about including Thor’s gloves. But they also forgot about the Megingjörð, the power belt which is another of Thor’s legendary possessions. 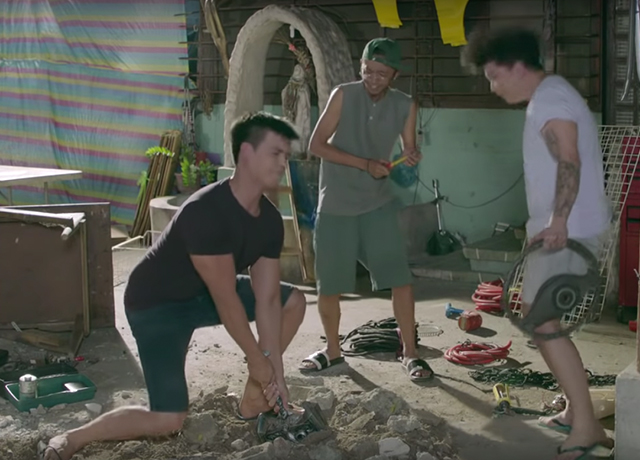 Things get a bit weird when Victor finds the gauntlets in Episode 6. This episodes marks the first appearance of Victor’s superhero alter-ego. In a detailed transformation sequence that will cause deja vu to fans of another technologically-powered superhero, the armored gloves transform into a full body armor. He is now able to summon Mjolnir. Props again to the visual effects department for not taking a shortcut with Victor’s first transformation.

Back home, Victor’s father suffers a stroke in Episode 7 and this becomes the starting point for one of Victor Magtanggol’s weirdest episodes. Strapped for cash, Victor tries to join an illegal gladiator fight in, of all places, Canada. Fans of a web-swinging superhero will immediately notice the similarities. The difference with Victor is his powers doesn’t work and he gets pretty roughed up. Magni pops ups from the compass Star Wars hologram-style to lecture him about the proper use of his powers, which is for the greater good. With great powers come great Norse myth-splaining.

Victor Magtanggol doesn’t pull its punches with it shifts into full soap opera mode in some episodes which are best shown with his reunion with his long lost mother in Episode 8. Buckets of tears are shed in this episode where Victor finds the real reason why his mother left him and his family. Let’s not forget about his dad who is still lying in bed while recovering from a stroke.

As all of this is happening, another family drama is taking place. Modi’s jealousy and desire for the power of Mjolnir has reached its peak when he imprisons Sif, his step mother. He believes he is the rightful heir to Thor’s legacy and world serpent-smiting weapon. Behind all of this is the recently resurrected Loki.

The balikbayan Victor gets to test his powers back home after he rescues several schoolkids from a fire. Episode 10 shows us two things: the show stands out when practical effects are used with minimal CG and Victor, in full armor, is immune to heat and smoke inhalation. There are some episodes however, where the CG is laughably bad. Episode 11 is notorious for the appearance of the monstrous vargr. Or that’s what the VFX team intended to show. Instead, of the showstopping beast that’s similar to the wolf Fenrir that fought against a hulking green giant, the vargr in Victor Magtanggol looked something as stiff as a piece of jerky. It’s also disturbing that it was shown wreaking havoc on innocent civilians in broad daylight and biting their heads off.

The appearance of Thor’s wife, the goddess Sif, in Episode 12  will almost make you forget the vargr. Played by Andrea Torres, her rather unearthly appeal makes sense. It’s enough to make you forget that she’s wearing an incredibly fake yellow blonde wig. She’s accompanied by Ratatoskr, a talking animal sidekick (really a squirrel from the Eddic sources) that looks like a hybrid between a Furby and a tarsier but moves like Bubo the owl from the ‘80s Clash of the Titans movie. This god/mythological animal pet sidekick schtick is mirrored by Loki and his creepy serpent Nidhogg who has both tiny arms and wings. Victor’s nephew, Meloy, played by Yuan Francisco with cheek-pinching cuteness is our hero’s apparent sidekick. Despite his seeming innocence, Meloy is the first to figure out Victor’s secret. He has also successfully prevented Victor’s lady love Gwen from getting killed by Sif who was caught in a momentary bout of jealous rage.

When it comes to most of the female deities, Victor Magtanggol is spot on with its casting. Backtracking to Episode 2, the Freya is played by Diana Zubiri who radiates in her short role. She accompanies Modi to the underworld only to be betrayed and killed by the god and his cohort Loki.

With Sif’s arrival, we learn more things about Victor’s powers. His armor gives him limited healing ability and Mjolnir can be wielded bare-handed by any denizen of Asgard. As demonstrated by Sif, the Járngreipr has another trick. It can further shrink to bracelets that look like some aunt’s jewelry.

When it comes to the most of the female deities, Victor Magtanggol is spot-on with its casting.

While some local shows can be faulted for lack of self awareness, Victor Magtanggol has its meta moments. Fully embracing the superhero name Hammerman, he thwarts a group of Martilyo Gang members in Episode 14 who are terrorizing the town mall. Although Victor has a simple catchphrase (“Panalo!”), he’s gone on record to say “It’s Hammer time!” while dressed as Hammerman. Corny, but fourth wall-breaking funny.

While the early episodes of Victor Magtanggol lean towards drama, there are are also moments of light humor. In Episode 17, the formal and normally aloof Sif gets invited for a round of drinks with Victor, his brother in law, and a friend. Sif nonchalantly chugs on several bottles of hard liquor without any ill effects and outdrinks them all.  In a previous episode, Sif discovers the pleasures of eating ice cream in a scene reminiscent of an Amazon superhero.

Despite the potential of adapting from a rich Eddic source material for additional world building and story ideas, the villains in Victor Magtanggol are severely underwritten. Loki, as played by John Estrada, is given a typical Pinoy movie villain snarl complete with a hollow maniacal laugh. Strangely, Loki’s human alter-ego Dr. Mikolai, a scientist at a geothermal lab, sounds more convincing. After the disastrous vargr episode, Loki’s other attempts include unleashing other denizens from the other realms.

In Episode 24, literally hell breaks looks on a skate park where Victor’s sister, Anne is participating in a cosplay competition. Her friend livestreams the unfolding disaster in portrait orientation on her phone but Victor views it in landscape format while at work.

Beating the vargr episode in terms of the worst CG effects, the jotunns in this episode look like crudely-drawn and animated pre-school drawings. The universal ridicule of this episode can be seen as Victor Magtanggol Surtr memes online. Hammerman and Sif try to do their best in what seemed to be an epic fight on script but got reduced to a playground tussle due to creative, budget, and time constraints.

Beating the vargr episode in terms of the worst CG effects, the jotunns in this episode look like crudely drawn and animated pre-school drawings.

When faced with a non-superpowered being, Victor Magtanggol sometimes drops the ball too. When a mysterious politician wants Hammerman eliminated, he calls on the services of master marksman Sgt. Talim. In Episode 26, Talim hits Hammerman with a headshot with nothing but the iron sights on his sniper rifle and a pair of mirrored shades. There must be something special about Sgt. Talim’s eyesight since from his POV, there’s actual crosshairs on Hammerman. Luckily, Hammerman survives the assassination attempt and gets nursed back to health by Sif who, in a typical telenovela fashion, is slowly developing feelings for the hearthrob mortal.

What’s a superhero when there’s no major cataclysm to go up against? Loki, for some reason, loses his eyes on the prize and forgets about recovering Mjolnir for the time being. Instead, his new world-dominating plan involves mining the earth for Asgardum, the same metal that according to the show, Mjolnir is made from. Of course, when checking the Eddic texts, Asgardum is nowhere to be found. In the texts, Mjolnir is just made from iron. But going back, Loki mines a local volcano for this precious metal. This sets off a massive eruption in Episode 33 which Hammerman tries to plug by going inside the volcano and pounding all the molten rock with all his might. If you can believe everyone in this show can say ‘Hammerman’ with a straight face, then Hammerman doing some plumbing work inside an erupting volcano is not a far stretch.

All of Hammerman’s superhero activities has come at a cost. His love interest Gwen, hates him for failing to save her grandfather while prioritizing thousands of people in the wake of the eruption. For the second time, Victor is seriously considering hanging up his Jarngreiprs in Episode 35. But is he giving them up for good? Highly unlikely given that in the last episode, there’s a hint of a crossover with Ecantadia Sang’gres in the end credits. Can Victor Magtanggol manage to keep things as interesting as the previous episodes? The inhabitants of Midgard can’t wait. 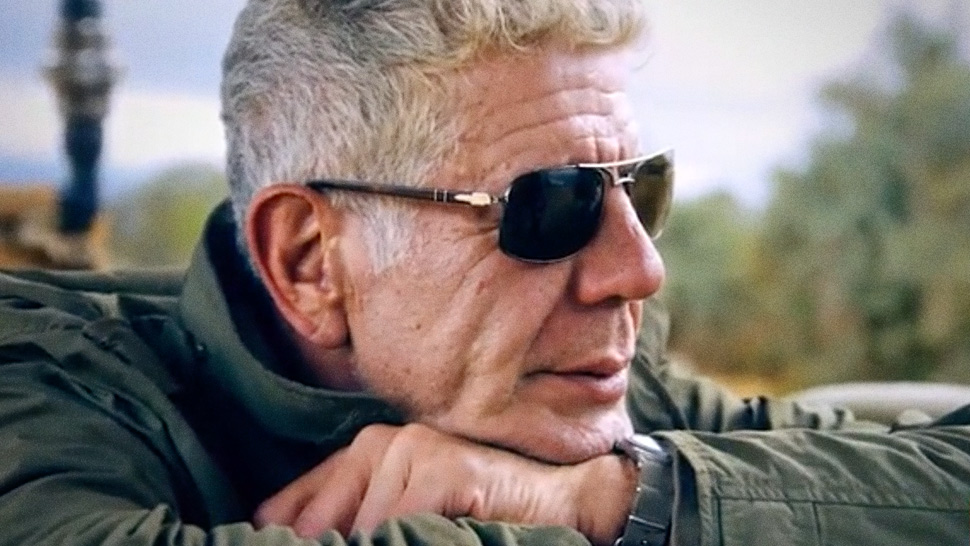