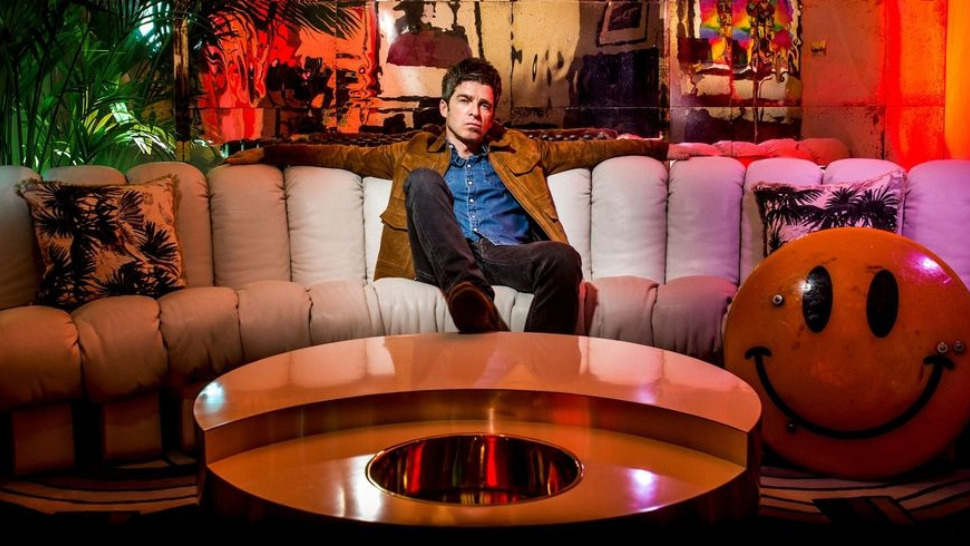 Oasis broke up on August 28, 2009 in a Paris dressing room amid a hail of expletives, smashed guitars and, apparently, thrown fruit, while a stadium of fans awaited the band's arrival. Since then, Liam and Noel Gallagher, the brothers behind Oasis, have waged a very public feud, leaving fans all but certain a reunion was impossible anytime soon. And then, it seemed, a Christmas miracle happened.

On Tuesday, Liam wished his brother a Merry Christmas on Twitter.

The tweet brought hope to Oasis fans. But one skeptical fan, recalling Liam airing his hurt feelings after feeling snubbed in previous years, tweeted at him: “Team who? Your not going to have a meltdown on here come Christmas day are you Liam when [Noel] doesn't reach out to you."

"He's already reached out," Liam replied, following up with: “We're all good again.” Then on Wednesday he tweeted yet another missive, giving a “massive thsnx to the CFH food was biblical drinks was boom ting until nxt time”—suggesting, for those of you who need a translation, that he and Noel had gone to Chiltern Firehouse in Marylebone, London, for a round of memorable food and drinks.

The British music press were quick to speculate just when and how a reunion might happen. Should we take these rumors seriously? I'm not so sure. The reality is Oasis likely won’t be getting back together any time soon, if ever, and that the Christmas cheer is the result of Noel playing the part of a good older brother. 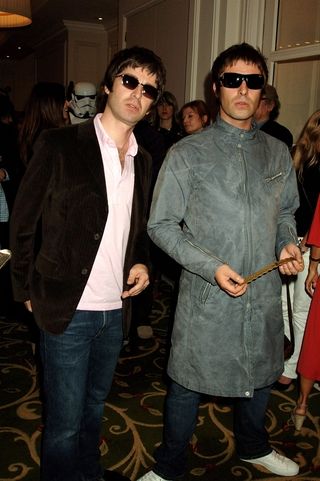 Noel and Liam Gallagher in 2005

In November, I spoke with Noel in New York during a promotional tour for his new album, Who Built The Moon? He referred to his brother in brutally disparaging terms repeatedly, if offhandedly, over the course of our conversation (“unwell,” “mental,” and “village idiot,” were just a few of the colorful descriptives that spring to mind). And when I mentioned my recent meet-up with Liam, in which the former Oasis frontman said several times  that his goal was to not be “a dickhead,” Noel was blunt.

“I couldn’t possibly say whether he’s winning that battle or not,” Gallagher said with an uncharacteristically hearty laugh. “Let’s just say I’m happy to have him out there creating his usual chaos and helping me sell my record.”

When the specter of an Oasis reunion came up in conversation, Gallagher batted it away with what felt like still-raw anecdotes from his days in Oasis.

He then summed up his feelings with a brutal takedown of his brother’s current creative pursuits. “Liam will forever be what he is because he's only into two things—he’s got two styles of songwriting—one of them is ‘Imagine,’ and the other one is ‘Instant Karma,’” he said. “That's great, but it's fucking boring. It's fucking boring is what it is.”

For all the brothers' drama, Oasis stands as one of the most influential and best-selling British rock acts of the last 25 years. And the band's legacy has endured, giving it a place in British pop culture. But having recently supported U2 on the band’s massive tour celebrating the thirtieth anniversary of The Joshua Tree album, Noel said he’d come to realize that Oasis was never destined for the longevity U2 has enjoyed, and chalked it up to his brother’s fear.

“We just weren't cut out for that level of fame,” he said. “I think we had the music, for sure. But we were just not that professional, as a band. But another fundamental difference between U2—and myself, for that matter—and my younger brother is that Liam is afraid. He's afraid to try anything. He has fear of failure. He has a phobia of being laughed at, whereas I really couldn't give a fuck one way or the other. When I played him ‘Cigarettes and Alcohol’ for the first time in 1994 he freaked out. It was just, ‘We can't do a song like that! People will laugh at us!’ And I was like, ‘Sit down, son, I know what I'm doing.’”

What’s painfully obvious when you speak to the Gallaghers these days is that Liam desperately misses being in Oasis and would reunite under just about any circumstances, while his brother Noel has moved on, relieved to be creatively and emotionally free of his brother and content to challenge himself—and his audience—rather than relive the glory days of one of the biggest bands of the late-20th century.

“We did all there was to do, creatively,” Noel Gallagher told me. “Any reunion would be great for my bank account, but it would be a year of my life—at least—where everything else would be on hold. And it would be miserable. Have you seen my brother’s Twitter account? His life is just constant chaos, and now that’s out there for all the world to see. Well, that’s what it was like being in a band with him, 24/7. Why would I ever want to go back to that?”

Perhaps as a result of his brother’s frequent ravings on social media, Gallagher comes across as anti-Twitter. “Putting all that personal shit out there? Not for me, mate. If you’re 15, it’s youth culture. If you’re 45, it’s just sad,” he told me in a thinly veiled swipe at his brother.

But mostly Gallagher seems appalled at what he sees as his brother’s all-hours, drunken tweetstorms.

“My daughter showed me a tweet of Liam’s recently and I cringed,” he recalled. “I was embarrassed for him… Because he’s clearly not embarrassed for himself. Then she told me he’d posted it at six in the morning. Fucking hell! What’s he thinking? It’s attention seeking of the highest order. Also, I think to be owned by your fans, because your fans can be in contact with you via social media, and to be owned by your record label, because they are in touch with the fans and they think they know what those fans want, and to be owned by the songwriters that are writing songs for you, because they know what the record company wants, well, fuck that! To me that's a form of slavery. It's certainly not fucking what I'm into.”

In other words, while a pre-Christmas pint may be in order—Gallagher did tell me that the squabbling had been a thorn in the side of his long-suffering mother, and he does come a cross as a dutiful son, if nothing else—it seems wrong to read too much into whatever détente the brothers are currently enjoying. Besides, when we spoke it was clear that he’s been having too much fun touring the world on his own. 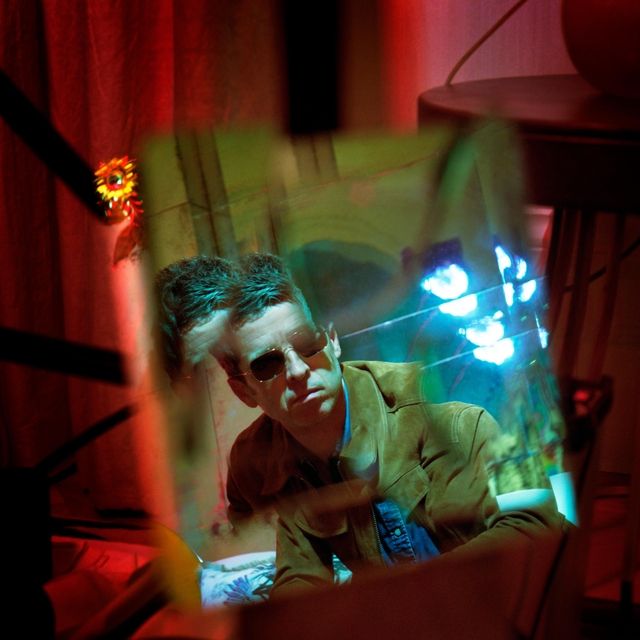 “Me and Bono did karaoke in Bogata, and neither of us can remember it,” Gallagher recalled with glee. “But we have it on very good authority that we did a duet of ‘Kung Fu Fighting.’ If anybody's videoed it, thank fucking God it's not gone out into the world. I can't remember it and he can't remember it, but all the girls on U2’s crew we're like, ‘It was fucking immense.’ And we were like, ‘Wow, “Kung Fu Fighting”? That's insane!’”

Ultimately, Noel Gallagher doesn’t seem to care what even his most ardent fans think, especially if they’re not willing to let him follow his muse. With Who Built The Moon? he’s ripped up the tried and true playbook that made him one of the most famous rock stars in the world, and the results, helmed by producer David Holmes, known for his soundtrack work and dancehall remixes, which were met with cries of sacrilege from many of his core fans, left him, typically, nonplused.

“Honestly, David and I weren’t prepared for that,” he said with a shrug. “The Internet blew up—blew up!—when we released the trailer the album. To be totally honest, I’d purposely chosen all the weirdest bits I could for that, just to see what the reaction would be. But then those people hadn’t even heard the album, so should I even really care what they think?”

“Besides,” he later noted, in one last parting shot at his brother, “you can’t walk into the studio and say, ‘What have you got for me today?’ and expect to make great records. Songs written by committee, that’s the state of things—and it’s why everything sounds like boring American pop music—but it’s just sad to me."

About The Author
Jeff Slate
View Other Articles From Jeff
Get The Latest Updates From Esquire!
Subscribe to our newsletter!
Latest Feed
Load More Articles
Esquire Money

What Does Jose Mari Chan Listen to on Christmas?