The painter/provocateur talks about the rise of auction stars, the ruin of the art scene, and the role of drugs in society. 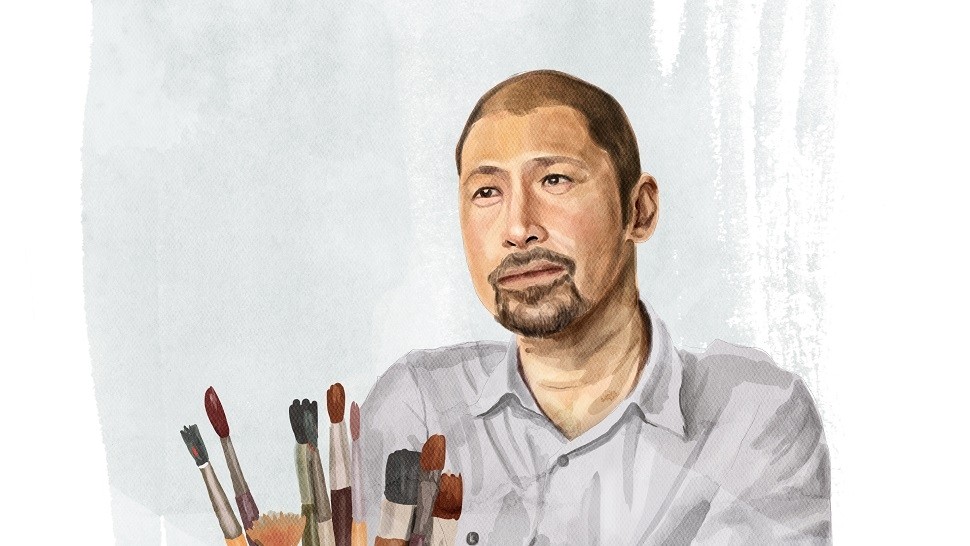 Manuel Ocampo, known provocateur on canvas and online, was recently announced as one of the representatives to the 2017 Venice Biennale. Along with fellow artist Gerry Tan, the painter talks about the rise of auction stars, the ruin of the art scene, and the role of drugs in society.

ESQUIRE: You’ve stirred up some attention with your Facebook rants about certain artists and collectors. Are you sober when you write this?

MANUEL OCAMPO: I’m actually with artist friends, and we’re laughing when we write those posts. I do it to create dialogue. I’m sick of people, especially artists, just posting their meals, or that they went to the gym today. I’m trying to provoke—it’s not only about Ben Cab or Paulino Que. I also raise issues about a certain sellable style in Philippine art.

ESQ: Which of your posts has gotten the most responses?

"I’m trying to provoke—it’s not only about Ben Cab or Paulino Que. I also raise issues about a certain sellable style in Philippine art."

MO: I said something about not getting hyperrealism as a style in painting, because there’s photography, there’s Photoshop. Why are people still doing it, is it because it sells?

ESQ: Maybe because it shows off their skills.

GERRY TAN: It says the artists have toiled hard on it. Like wow, you’re like a freak. Superhuman.

MO: It’s like the lack of originality is made up for by craftsmanship. If you don’t have any ideas, just do it with your technical skill. Someone commented that photography is flat, it’s a screen. With painting you leave traces, brush strokes. The process is very evident on the surface. There are layers. With photographs there are no layers. 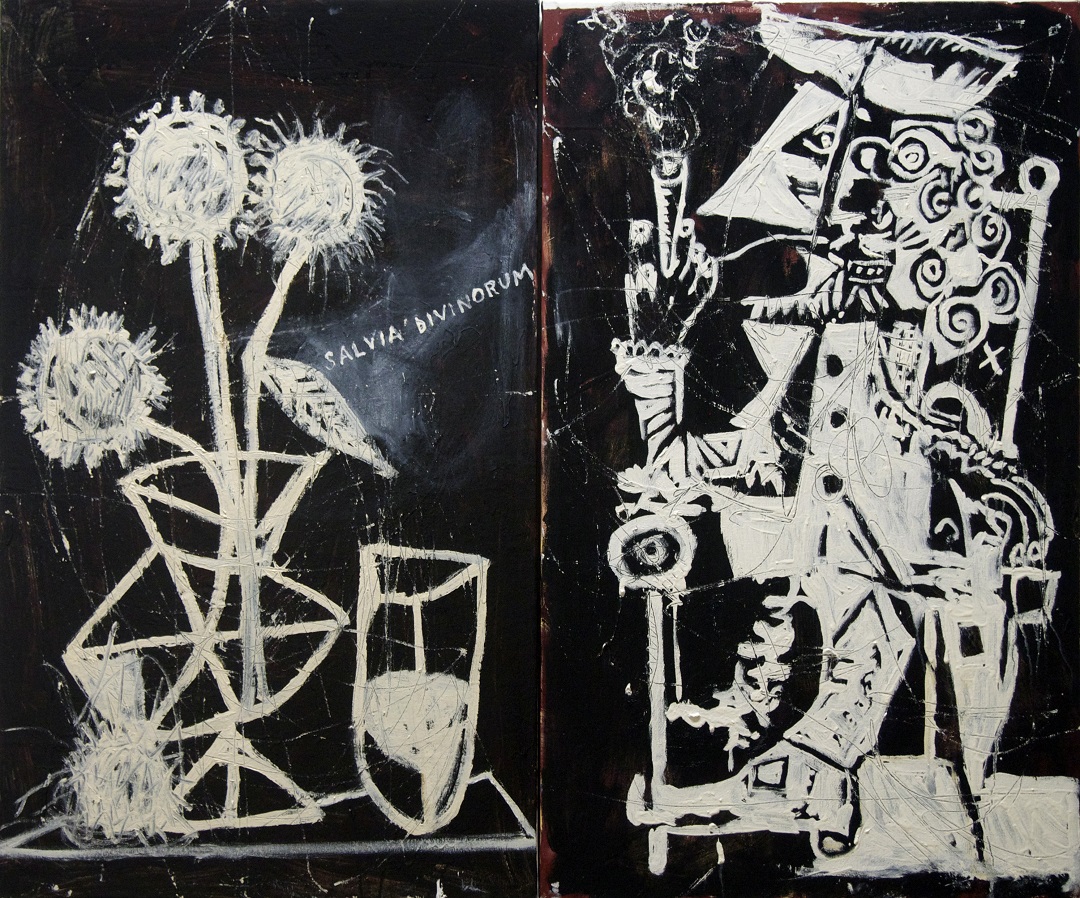 "[Hyperrealism] is like the lack of originality is made up for by craftsmanship. If you don’t have any ideas, just do it with your technical skill."

GT: I read somewhere they already 3D printed a painting of Van Gogh with textures and everything, based on a computer image.

ESQ: Where does that leave painters, if technology can do everything?

MO: It’s in the process. It’s not about the outcome. The act of doing is more important, I think, for most artists. Painters challenge themselves to become a machine, a camera. Like Gerhard Richter or Warhol, who wanted to be a machine. You’re distancing yourself from the work. Most painters are just fetishists in a way.

GT: There seems to be a common theme. Like people looking at a painting, the back of one’s head?

MO: That came from Richter. The portrait of his daughter in a museum looking at something.

"That five percent is not going to make the artist rich. It just recognizes that the work is not just some merchandise."

GT: I like Manuel’s comment on that in one of his paintings. The head was turned around 180 degrees. That was funny.

MO: I think these artists just can’t paint faces (laughs). Another thing I raised on Facebook is the issue of the five percent resale royalty rights. It’s a law, put into law in 1974, amended in 1994. The artist is supposed to get five percent.

GT: I think that five percent is right, artists get old, their energies wane, they produce less. In real life, you need help. You get sick, eyesight gets bad.

MO: That five percent is not going to make the artist rich. It just recognizes that the work is not just some merchandise. The auction houses, they’re dominating the market. Most buyers are getting artworks from auction houses. Galleries are complaining. None of these buyers go to their galleries, but when there’s an auction, it’s like a spectacle.

ESQ: So you think auctions are ruining the art scene?

"The auction houses, they’re dominating the market. Most buyers are getting artworks from auction houses. Galleries are complaining. None of these buyers go to their galleries, but when there’s an auction, it’s like a spectacle." 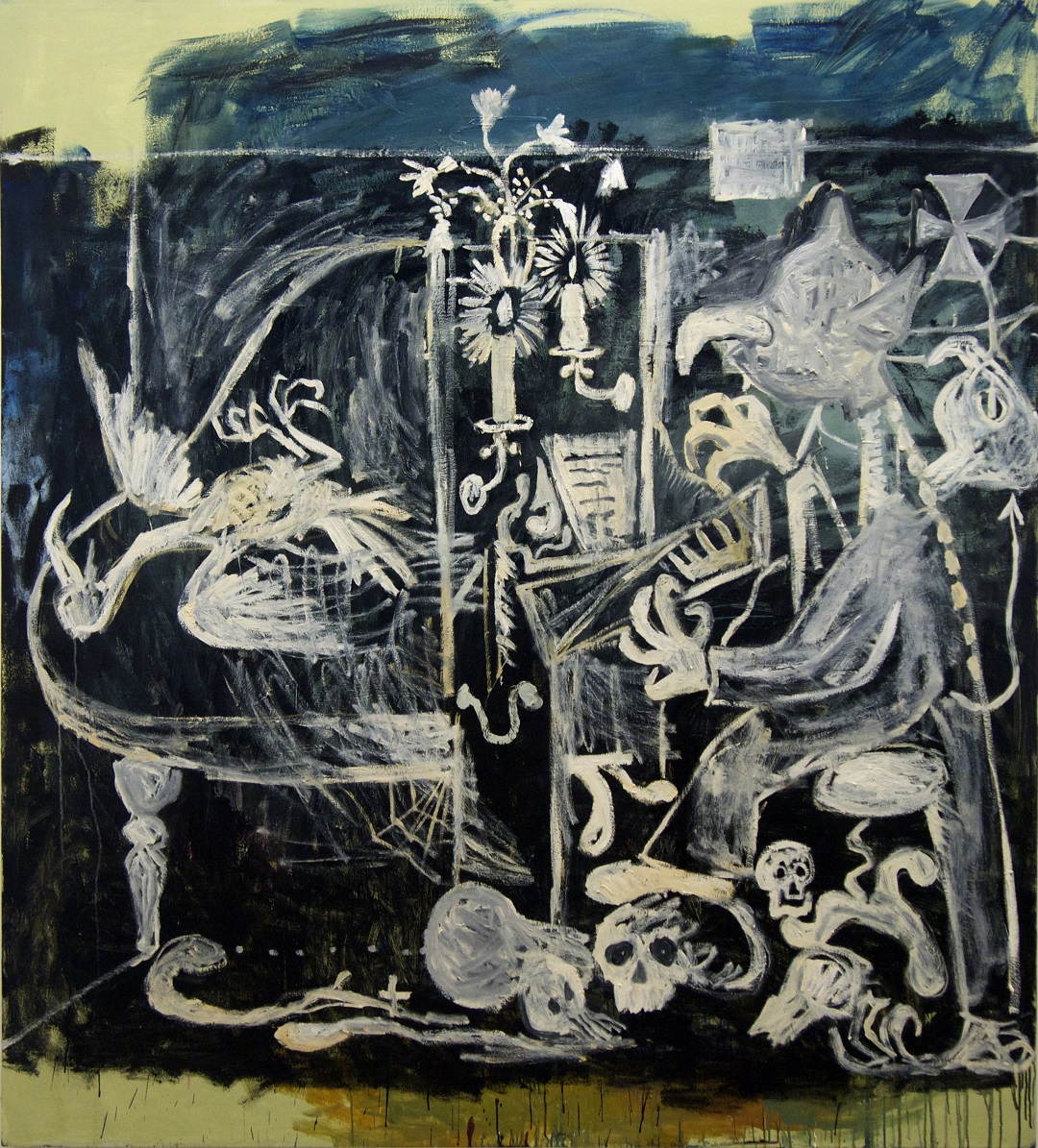 "Collectors aren’t collecting anymore, they’re just investing, and so the culture becomes stagnant because many artists are just copying the style of the auction stars."

MO: I think so. It sort of made it more focused on selling. Collectors aren’t collecting anymore, they’re just investing, and so the culture becomes stagnant because many artists are just copying the style of the auction stars. The auction house is the main barometer, the gauge for if an artist is marketable.

MO: But they don’t need to prostitute themselves.

ESQ: You came back from the States and wanted to turn Manila into a vibrant art community, so in a way—

ESQ: This is not what you envisioned as an “international art scene.”

"Only a few people are really passionate about collecting. That’s why it’s important for us to educate the public."

MO: I envisioned it something like: good infrastructure, good support system. There’s good dialogue going on within the community, and artists are recognized, culture is seen as something important for the identity of the country. Now it’s just become a big business.

GT: Too market-driven for comfort.

ESQ: I hear that it’s a front for money laundering.

MO: It’s always been that way. Only a few people are really passionate about collecting. That’s why it’s important for us to educate the public. Now it’s enriching drug lords. You can follow in the auction houses who are selling off the works they just bought.

ESQ: Did you boycott exhibiting here or something?

"The art becomes a background for selfies. They’re just props."

MO: I boycotted the Art Fair.

ESQ: An art fair is really meant to be a marketplace.

MO: They held a competition among artists sponsored by a watch brand. It was like a noontime variety show, asking the viewers to clap loudly for their votes. I felt it was degrading to the artists. This was in 2014.

ESQ: Since then it’s become a photobooth...

ESQ: People just post pictures of themselves looking at the paintings. It’s come full circle. What about Art in the Park, do you feel the same way about that?

MO: (laughs) Yeah, it’s like a drug deal. Either you get the drugs in a parking lot, or in a park. 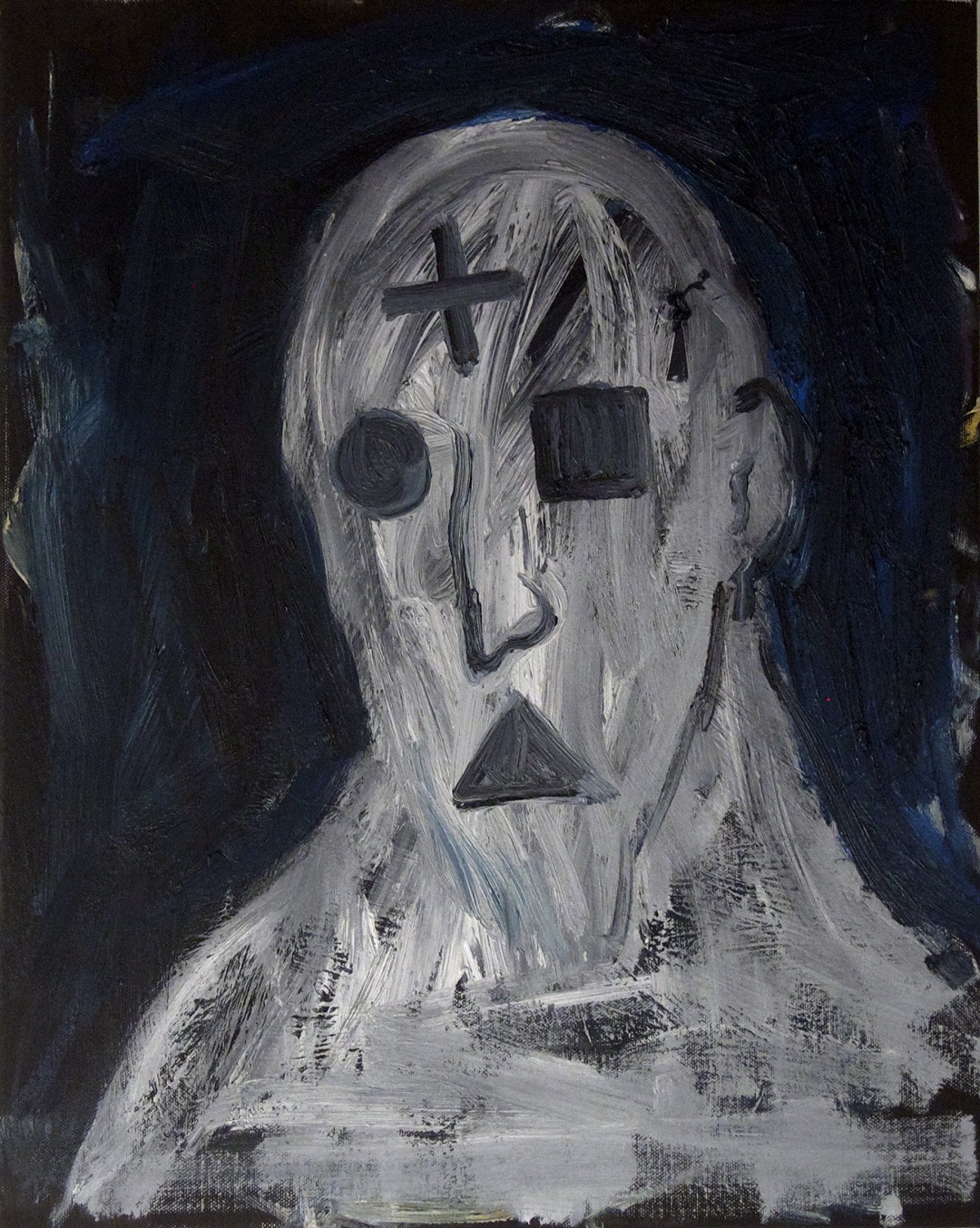 "You’re looking at art; it’s a language. You have to learn it."

ESQ: Isn’t it good that everyone can now own a piece of art?

MO: Yeah, but they don’t know what they’re looking at sometimes. They’re just looking at some brand. In order for an artwork to trigger something, there needs to be a system already set up for you to understand it. We need institutions, the media, magazines for it to be understood. You’re looking at art; it’s a language. You have to learn it.

ESQ: People look for brand names, like a Louis Vuitton.

MO: Or a Louie Cordero (laughs).

ESQ: So what’s next for the art scene?

MO: We’re just waiting for the bubble to burst, see who survives it. The auction darlings, they’ll stop selling because their works are too expensive.

ESQ: When were the best years for you?

"We’re just waiting for the bubble to burst, see who survives it. The auction darlings, they’ll stop selling because their works are too expensive."

MO: Before 2007, that’s when you started hearing news about who broke the auctions. The wealth always shifts, when there’s a crisis in one region, another region is getting rich. That time was the Euro crisis and wealth shifted to Asia.

GT: Before, when the market was not yet developed, we rarely sold a work in our shows. We were excited to check the papers after the shows, read what the reviews had to say. If we sold more than three works we got worried—is something wrong with me? Am I a sellout?

MO: Artists were more interested in doing innovative stuff, creating a dialogue with regard to the medium. It was an intimate conversation between artists and a few aficionados. When there was an opening it was like a family get- together, the artist’s mom would cook. The artworks were very challenging.

GT: But the wine is still bad.

GT: The artist is supposed to comment on society.

ESQ: What if you were selling millions at an auction, would you still be saying the same thing?

MO: I’d still be critical. I wouldn’t be making the money, it would be the seller. It would make me worried actually, if your auction prices go up you have to match it. If at the next auction you fail, that’s the end of your market. That’s why a lot of them are manipulated by collectors to make sure, for example, a certain auction darling’s results come out steady, or even higher than the previous auction. They’re looking out for their investments. They’re always propping up. That’s the problem.

GT: What’s it in Tagalog? Subastahan. Like auctioning off slaves. 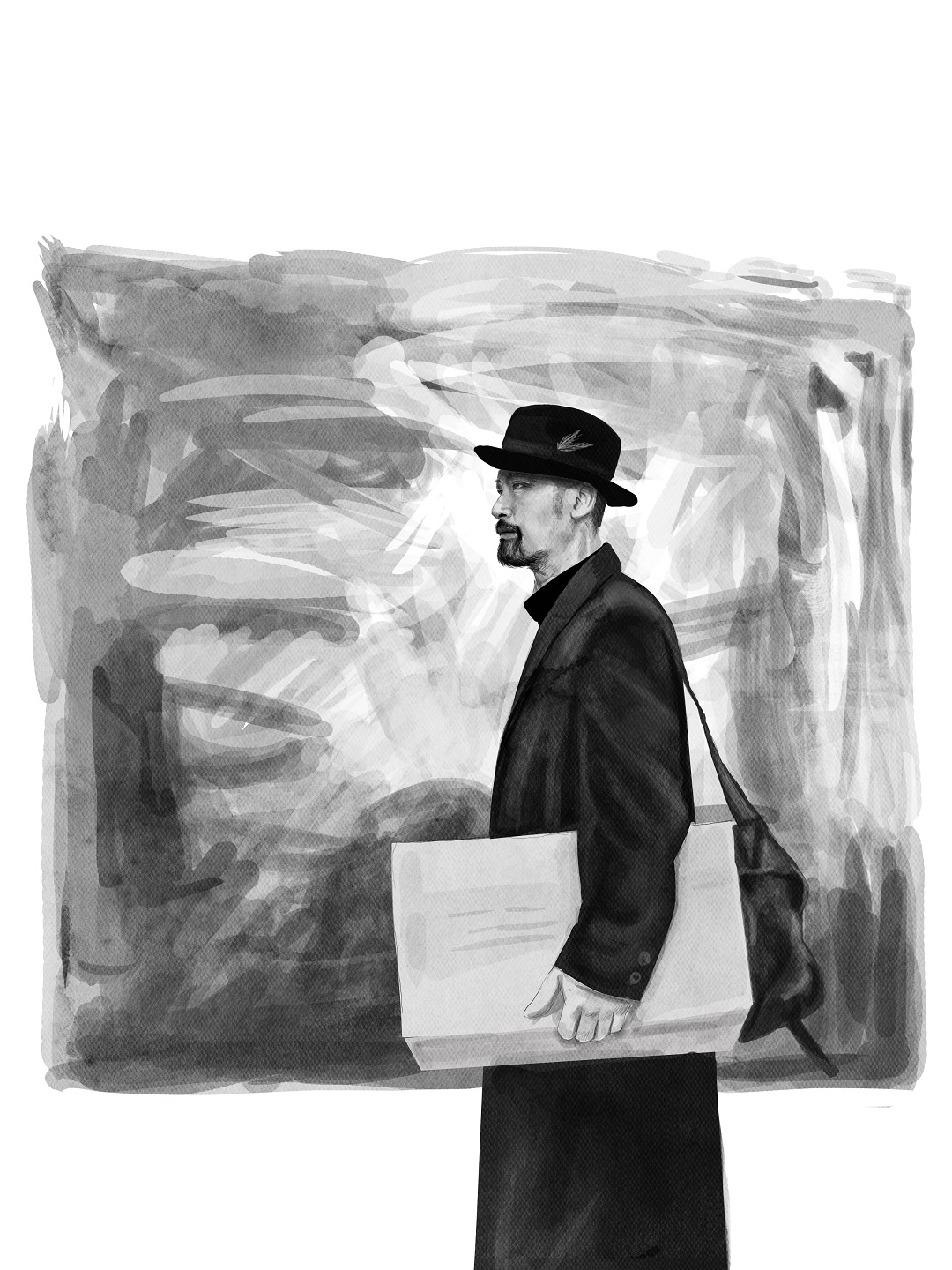 ESQ: Congrats on Venice! Now you ARE Philippine art.

MO: Thanks, hahaha. It’s hard to represent a nation when the idea for me is quite absurd.

ESQ: Why is it absurd?

MO: I think the idea of national identity is slowly losing its substance.

ESQ: The premise of the curatorial proposal was to use Rizal’s “devil of comparisons” as a way of understanding your work. What do you think about that? Is there a “spectre of comparison” between the Philippines and the West in your work?

I think the idea of national identity is slowly losing its substance.

MO: I think the idea of the West versus the rest is another absurd dichotomy when we know this country is totally subsumed by the West. When I exhibit in Europe, I am seen first and foremost as a painter. I don’t think people are aware that I am Filipino. The language I use with regards to painting is a universal language, therefore it belongs to anyone and everyone. I think the specter of comparison premise is speaking only to Filipinos, as Filipinos are the only ones who can grasp this via Rizal. I think Filipinos have this mania of always comparing itself to the West.

ESQ: Given the current climate of Duterte’s war on drugs, is there a political statement in your current exhibit Paintings to Take Drugs to at the Drawing Room? (I feel like there’s so much hypocrisy nowadays—as if people never did drugs before!)

MO: Yup, you said it. I know a couple of folks who at one time or another were druggies and now their drug is Du30.

I think Filipinos have this mania of always comparing itself to the West.

ESQ: Do you think artists and drugs need each other?

MO: I posted on FB influential historical figures/artists who used drugs in their art: Henri Michaux, William Burroughs, Antonin Artaud, etc. I think someone hacked my account, since I have been posting stuff that could be seen as having a pro-drug sentiment or even advocacy, which is actually far from it. I just want people to look at the bigger picture with regards to drugs as it is embedded within our story or the history of mankind. This war on drugs just started in the ’70s during the Nixon administration.

MO: No atrocity was perpetrated without a moral veneer —Theodore Adorno. 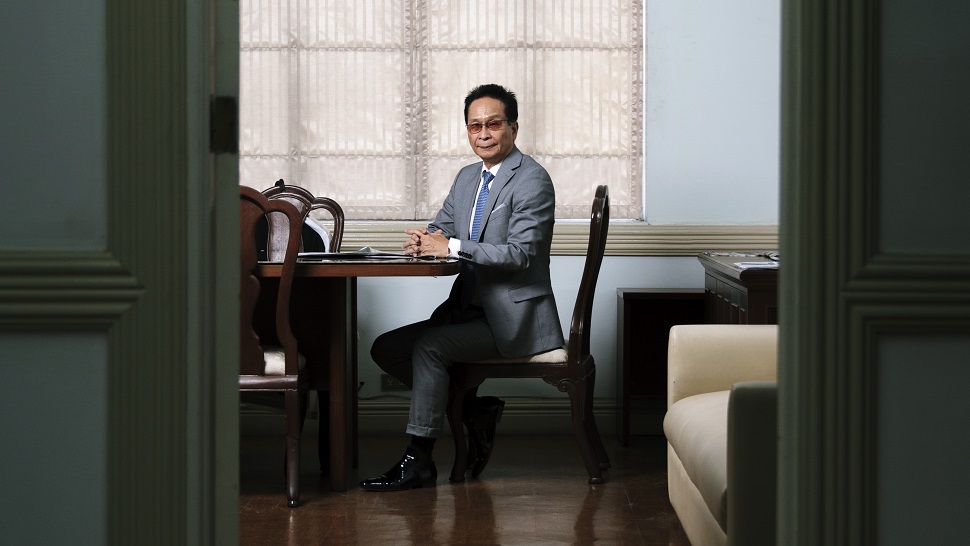 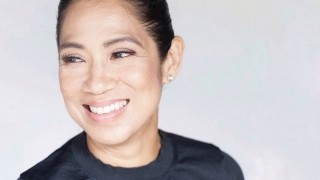