Coming soon to theaters near you?

Put down your soda and popcorn, and stand at attention. Wipe off the grease, salt and crumbs before placing your right hand on your chest. The national anthem is about to be played and will demand your full focus and dedication (as it should). At least that’s going to be case if the updated Flag and Heraldic Code of the Philippines, which has just been approved by the House of Representatives, is enacted.

While for now it's sufficient to respectfully rise, cinemagoers, civil servants, athletes and audiences might soon have to passionately sing the anthem whenever it’s played or performed in public. Even in its current form the flag code asks that “singing must be done with fervor”, but soon it may be mandatory. Imagine cinemas, government offices and sporting venues reverberating with the animated performances of proud citizens.

The code states that “the anthem shall not be played and sung preceding events of mere recreation, amusement, or entertainment purposes, except on the following occasions: international competitions where the Philippines is the host or has a representative; national or local sports competitions; during the "signing off" and "signing on" of radio and television broadcasting stations; before the initial and last screening of films and before the opening of theater performances; […and] other occasions as may be allowed by the NHCP.”

If approved by the Senate, any lackluster performance could be punished by a prison sentence of up to one year, and a fine between P50,000 and P100,000. Enforcement could prove tricky unless patriotic cinemagoers and sports enthusiasts start snitching on their seatmates. Or, perhaps Derek Ramsey will warn uninspired singers with a thrilling, new public service announcement. “Pare, patriot ako.” 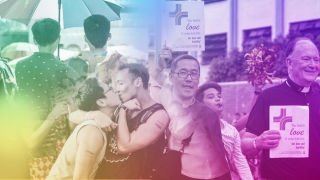