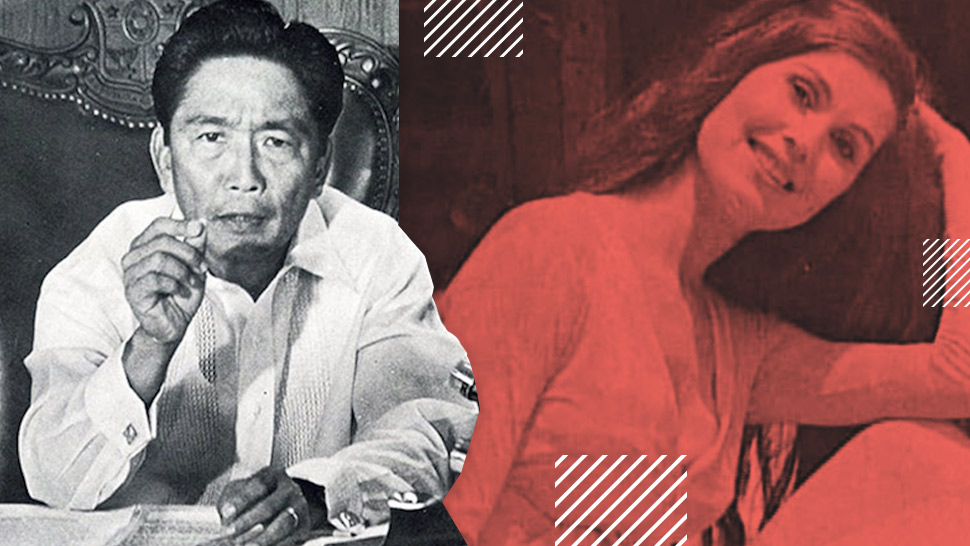 Some have called it inappropriate, deplorable, and just plain gross, while others insist on brushing it off as just another cute gimmick. (Watch it for yourself if you'd like, or maybe don't, because it can't be unseen.) The SoKor Smack is just the latest in a growing list of incidents that may be called unpresidential.

It calls to mind some previous times that presidents have had similar brushes with indecency under the public eye. Here are some of the more high-profile cases of presidential misconduct, all worth remembering in an age when the lines that define stesmanlike conduct are being crossed, blurred, and broken down. Better yet, note how these scandals eventually turned out.

Ferdinand Marcos and The Dovie Beams Tapes
In 1970, former President and dictator-to-be Ferdinand Marcos became embroiled in a scandal involving American actress Dovie Beams. Beams had come to the Philippines to shoot a movie entitled Maharlika, about Marcos' life, in which she would play his love interest. In the years that followed, Marcos and Beams were believed to have developed a romantic relationship. After pressure and death threats mounted on Beams, she eventually held a press conference and revealed recordings of her intimate relations with the president. These recordings would eventually be used by Marcos' opposition during demonstrations, until he declared martial law in 1972.

Joseph Estrada and The Five Mistresses
While many will remember Joseph Estrada's administration most for corruption and his eventual plunder conviction, history won't forget his five mistresses, who all figured into the charges filed against him. Guia Gomez, Laarni Enriquez, Joy Melendez, Rowena Lopez, and Peachy Osorio were all brought into Estrada's Senate corruption trial, and the details of their relationships unfurled.

Donald Trump and Pussygate
One need not look further than the current U.S. president for cases of indecency. In the last few weeks leading up to his election, Donald Trump was exposed for making lewd, misogynistic comments in a behind-the-scenes tape of his appearance in Access Hollywood. Speaking privately to TV host Billy Bush, Trump talked about seducing a married woman, and uttered the words that would scar his political career permanently: "When you're a star, they let you do it. You can do anything. Grab them by the pussy."

Donald Trump and Stormy Daniels
Just last January, news broke that Donald Trump's personal lawyer, Michael Cohen, paid adult film actress Stormy Daniels $130,000 in October 2016, as hush money to keep her from discussing an affair she allegedly had with Trump in 2006. While this is a case of Trump behaving badly before he was president, it's still an ongoing scandal that his administration is suffering from.

Bill Clinton and Monica Lewinsky
Perhaps the most well-known presidential sex scandal in modern history is that of former U.S. President Bill Clinton and his affair with then-22-year-old intern Monica Lewinsky. The allegations of an affair came to light in 1998, to which Clinton responded with the now-famous lines, "I did not have sexual relations with that woman." The President had become the subject of a sexual harassment case. Further investigation lead to charges of perjury and obstruction of justice, and eventually to an impeachment case by the House of Representatives. Clinton was eventally acquitted by the Senate and allowed to serve the remainder of his second term as President. His marriage with Hillary weathered the storm.

John F. Kennedy and Marilyn Monroe
Former U.S. President John F. Kennedy was rumored to have many high-profile affairs, but none more scandalous than one involving actress Marilyn Monroe. And while none of them were thoroughly proven, his affair with Monroe became a pop culture fixation after she sang him "Happy Birthday" in 1962, with a sensual and suggestive tone.

Jacob Zuma and The Post-coital Shower
Before he became President of South Africa in 2009, Jacob Zuma faced charges of rape, lodged by a 31-year-old HIV-positive AIDS activist. At the time, Zuma was deputy president of the African National Congress, and the victim was a member of a prominent ANC family. Zuma responded to the charges by claiming that the sex was consensual. But the scandal became even more sensational when he added, in his court statement, that he took a shower afterwards to "cut the risk of contracting HIV." This was condemned on all fronts because aside from being patently wrong, Zuma happened to be the head of the National AIDS Council. Zuma was eventually acquitted of rape charges, and got away with a slap on the wrist for having unprotected sex with someone who he knew was HIV positive.