Speak Up and Speak Out: CNN's Paula Hancocks Shows Us How Tough Women Can Be

The fearless journalist tells us how women can learn to speak up. 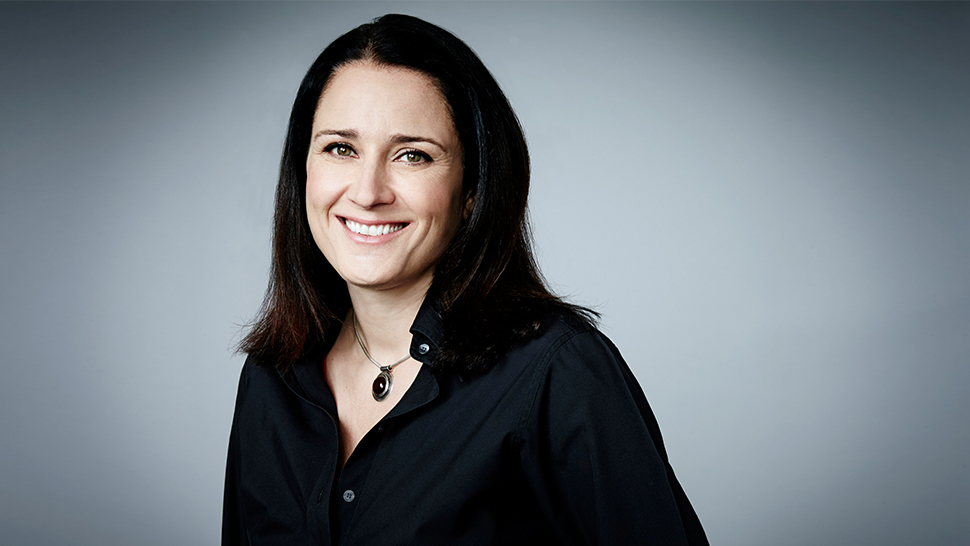 On the morning CNN International correspondent Paula Hancocks landed in Manila, the world had its eyes on the Korean peninsula. It was March 22, 2019, and news watchers focused their attention on North Korea withdrawing its stationed staff members from the joint liaison office in Seoul. They also watched as the K-pop industry took a hit after Jung Joon-young, one of its brightest was arrested. And they were disturbed by the revelation that a staggering 1,600 motel guests were secretly filmed in 10 cities across the country.

For the past eight years, Hancocks has been covering stories just like these, after she was stationed in Seoul.

Twenty years ago, Hancocks landed a job as an intern at CNN’s London office, and from there, worked her way up to producing, and then finally reporting. She’s encountered everyone from the Korean male group Big Bang to both North and South Korean heads of state. She’s also reported on top news stories around the Asian region, including the devastating Typhoon Yolanda that laid waste on our country. 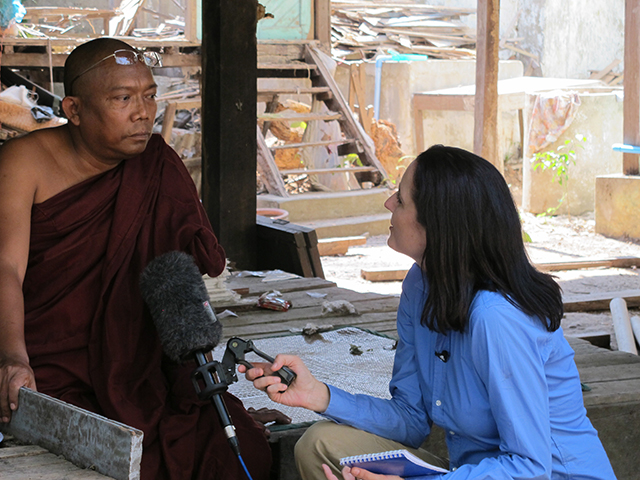 Paula Hancocks speaks to a man in Myanmar in 2011

On the day Town&Country met Hancocks, she was to give an address at CNN Philippines’ second women’s summit at SM Aura the following day. Naturally, the topic of closing gender gaps and her own experience of lending women a voice was part of the conversation.

From London, how did you end up being stationed in Korea?

I had about more than a decade in London, then moved to Jerusalem for three years, I was the correspondent there. Then I came to Korea eight years ago. I intended to be there for two years but I haven’t left yet. It’s a very interesting place and it’s such an interesting story as a journalist. It’s very difficult to leave. 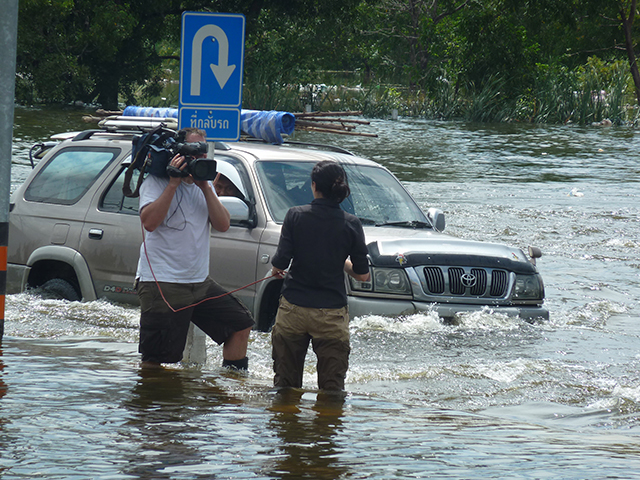 Hancocks reports from a flooded Bangkok in October 2011.

What do you love most about it?

From CNN’s point of view, the bread and butter when it comes to news is the South Korea and North Korea story. There’s an international fascination about North Korea. When one of my pieces is posted online, it’s generally one of the most read pieces that day. There’s this insatiable appetite for news around North Korea around the world. I think because up until recently there was so little known about the country. There’s this fascination that people want to know more. Recently with these summits that have been happening with the South Korean and the American leaders, it’s an evolving story that people are still very interested in.

How do you feel about covering these types of events and the summits?

I’ve been there for eight years and I’ve been to North Korea as well. It’s definitely a story that I feel I have a lot of context on as I’ve covered it for so long. I don’t think anyone can ever call themselves a North Korean expert because there’s just so much that’s not known. I always use the term ‘North Korean observer’ or ‘longtime observer’ for many of the experts that are out there. It’s such a fascinating story as it really has been top of the news agenda for the past two to three years. There are just so many different elements to it. Obviously, 2017 was all about the nuclear and the missile testing, 2018 was about the Olympics, and then the start of the summits. This year, you have the failed summits as Hanoi and then the stumbling towards potential denaturalization and it just keeps changing. 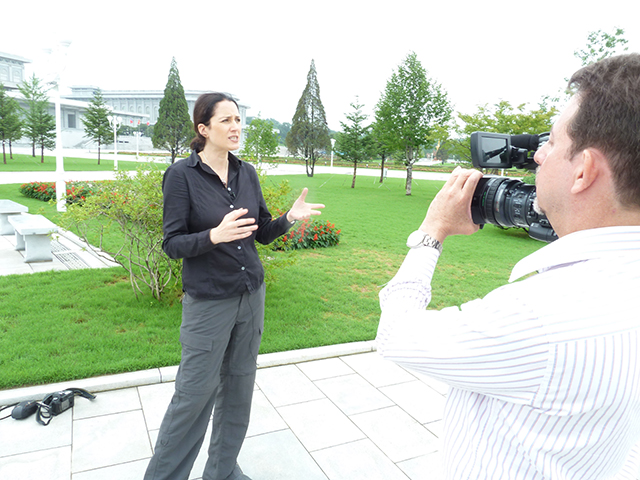 Hancocks during a rare news coverage in Pyongyang, North Korea in 2013

There are some studies that suggest South Korean women prioritize their careers over having children or getting married. What do you think about that?

There seems to be this trend at the moment that South Korean women have to choose, that they can’t have both. They have to choose between getting married and having children or having a career. It’s an evolving society. The #MeToo movement last year really took off in South Korea. You have a lot of issues that women are dealing with and tens of thousands were on the streets of Seoul last year, which was the biggest female protest calling for better treatment of women in South Korea. There’s a real turning point that women are demanding for better treatment but there is still this belief that you can’t have everything.

Last year, I was talking to some female students and I was pregnant at the time. Their questions were not about journalism; they asked about whether they would be able to go to work after having a child so there’s definitely a desire for women to be able to become working moms. I think there needs to be more infrastructure in place. Some prejudices knocked about a mother being able to work. It’s a working process, as it is in many countries around the world. 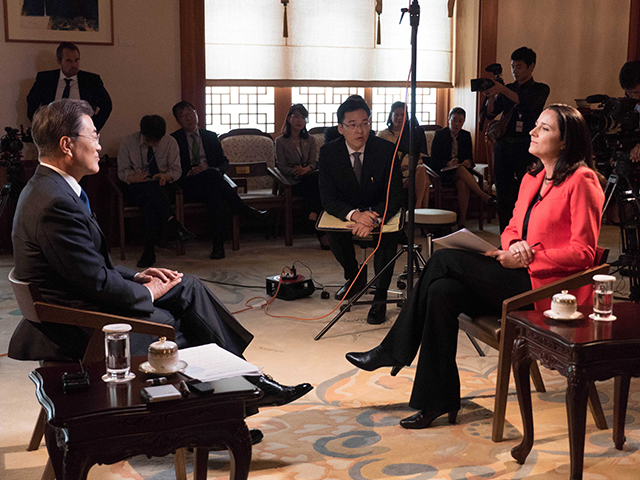 You'll be speaking at the women’s summit about closing gender gaps. Have you ever experienced prejudice yourself?

I have never knowingly been discriminated against. I’ve never felt discrimination within the workplace. I’ve worked for CNN for 20 years now and it’s a company that takes diversity seriously. My boss is female. The head of newsgathering is female. There are more females than males in the office I work at in Seoul, most of whom I helped hire. I didn’t hire them because they were women, I hired them because they were the best for the job. I’m lucky enough not to have confronted discrimination myself but I have a number of friends who have talked about it—feeling they’ve missed out on a promotion or a job because a man who they didn’t believe was as well-qualified as they were, had the promotion, complaints about the boys’ club and how can they fight against that. I’m well aware that’s a situation happening around the world and I’m lucky enough not to have had it. 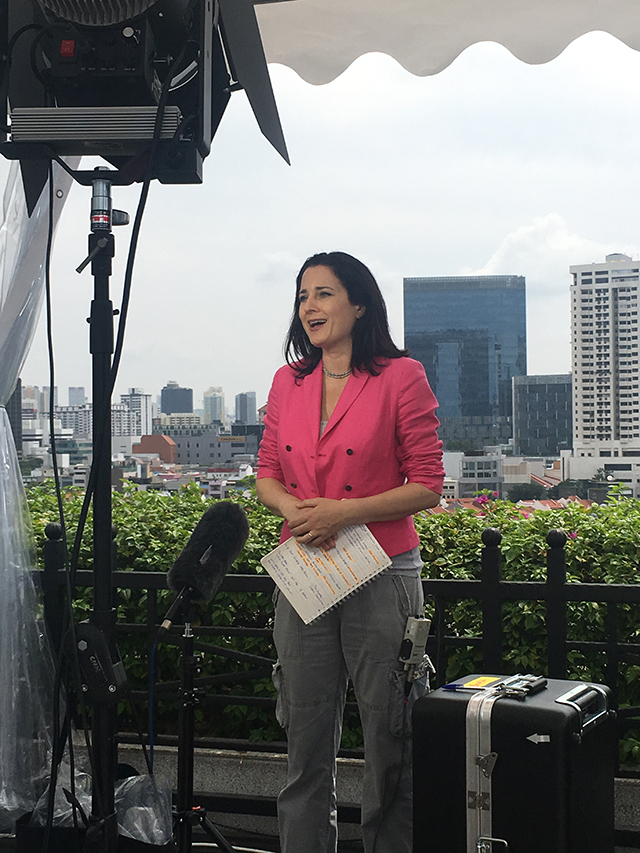 Reporting live from the Trump-Kim Summit in Singapore last year

There are a lot of inspiring women out there but is there someone who stands out to you right now?

The New Zealand Prime Minister Jacinda Ardern, whom everyone’s talking about. She’s showing that she’s a very strong leader; showing empathy, compassion, and determination in managing to get that gun bill through so quickly. I think she’s extremely inspiring and that’s something that people have been talking about all around the world.

Right now, we’re taking these preliminary steps toward closing that gender gap. What can the next generation learn from what we’re doing today?

The next generation is key because they are the generation that is now learning about these prejudices. If we ensure that they are brought up in such a way that they know that gender inequality is not good enough, then it will not happen. [The next generation] will take that forward—things like how we would describe girls versus how we describe boys.

We might call a girl bossy but then call a boy assertive if they could be behaving exactly the same way. These are the very subtle things that we might not even think about. These things have to change. Tell the young girls of today that they can do whatever they want. There is nothing holding them back.

We have this sort of beautiful blank sheet of young girls, and young boys as well, this isn’t just a women’s issue. The boys have to be supportive, they have to grow up knowing that they’re equal to women and why would there be any difference between the two. That’s what we can aspire to do. 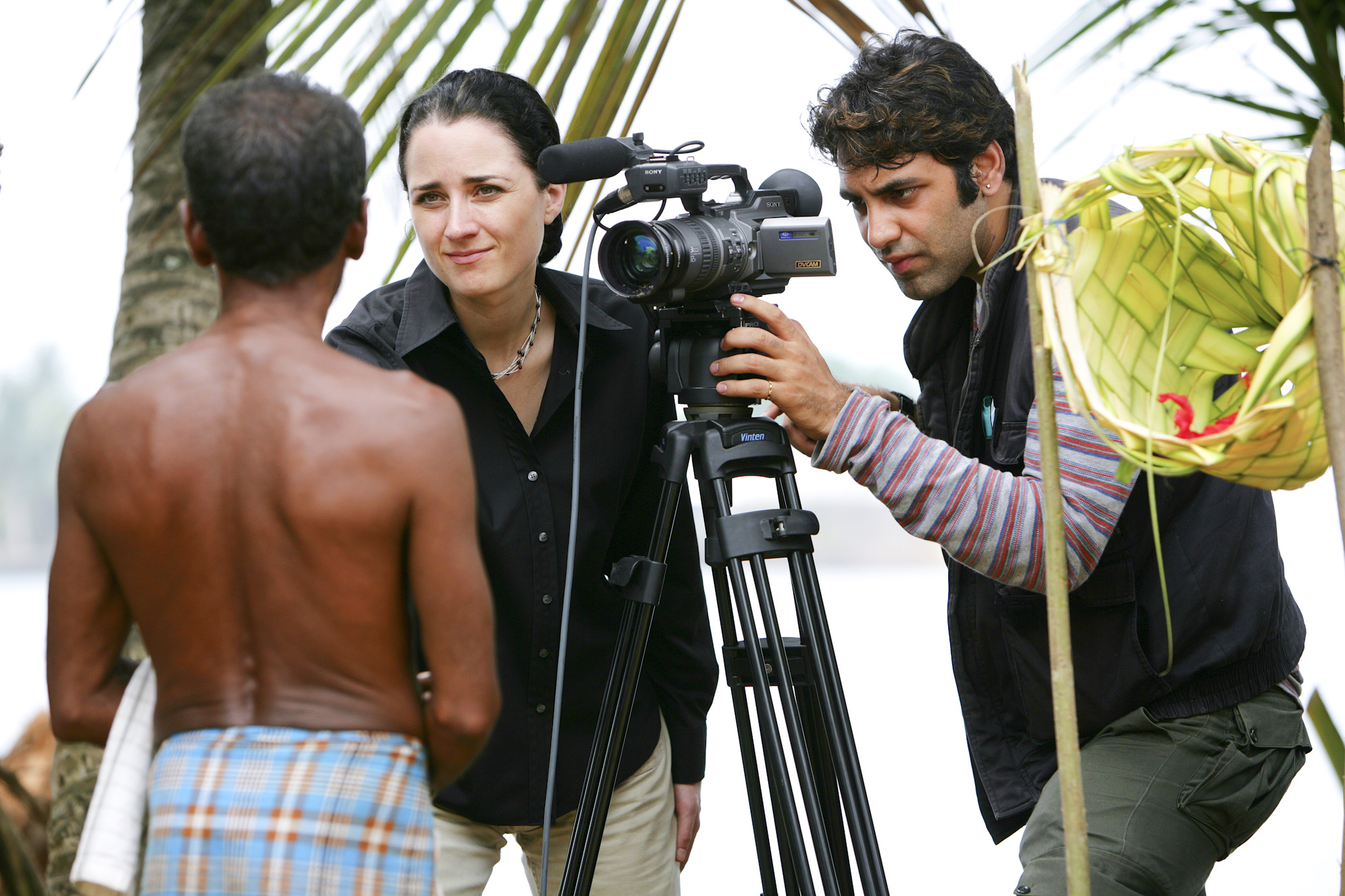 How do you think the abundance of commercials, ads, and social media products fits into the conversation about empowering women to speak up?

Social media can be an incredibly powerful tool for change. We’ve seen it with the #MeToo movement, we’ve seen it with the number of issues. It can be a double-edged sword though because social media also gives trolls a chance to directly focus on the people who they do not agree with. If you’re trying to have the grown-up, civilized conversation about gender equality, and you’re doing it on social media, inevitably there will be some trolls in the messages that follow so that can be an issue. But just the very fact that these issues are being discussed so openly, there’s no taboo subject anymore. Women are speaking about abuse and taking courage from other women that they say speaking up about abuse. 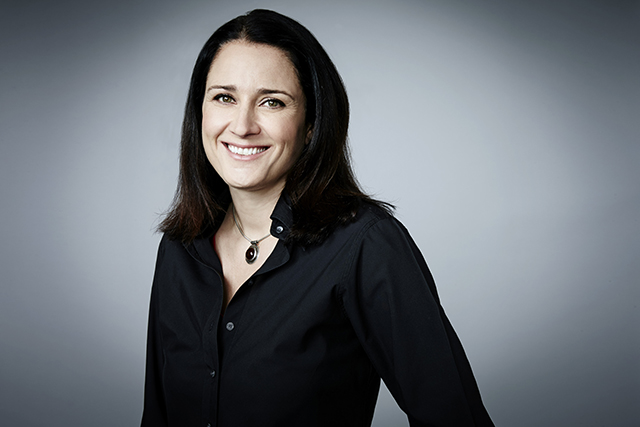 But aside from social media, what effective measures can women take to voice out their opinions in the workplace or at home?

I think women should be more confident, which is an incredibly easy thing to say. When I sometimes have self-doubts, I have to give myself a talking to: “No, you know what you’re talking about, you go to this meeting and you speak up and speak out.” That’s what I would say to all women if you are confident about what you are speaking about, then don’t apologize before you speak, don’t say, ‘Oh do you mind if I just add something.’ Don’t put yourself down. Be assertive and make sure that everybody’s listening to you. If more women did that, then that would help.

Also, be proud of what you’ve achieved. Some women have a tendency to downplay their achievements and they don’t want to be seen as boasting about what they’ve done. It’s okay to boast. If you’ve done something really good, talk about it. It’s okay to be proud of the success that you have. This is something that I’m guilty of and there are prejudices that have been instilled in you from a young age in a society where men could speak out about their successes and it’s not seen as ladylike to do that. That time’s over. Women need to speak up more and it’s happening. It’s changing. It’s an exciting time to be a woman. 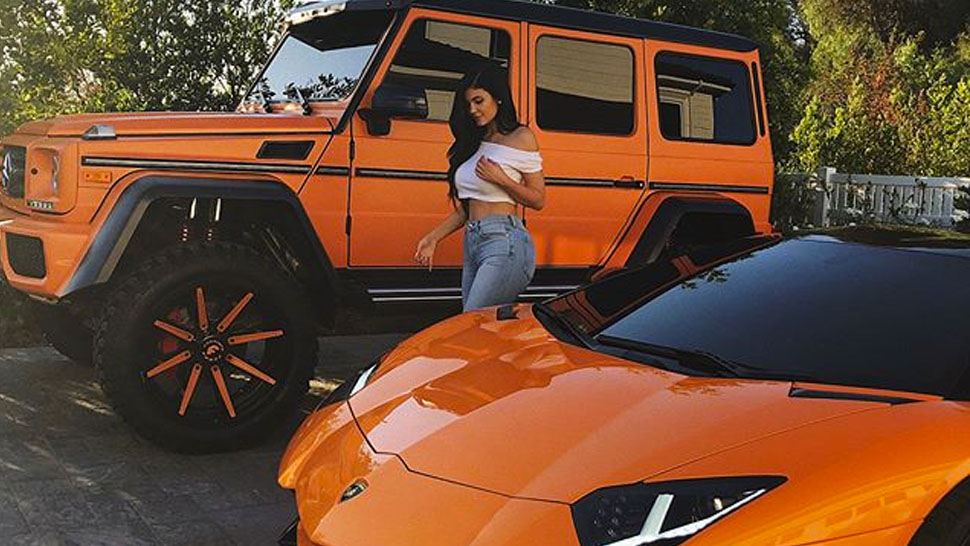 Inside the Lives of 7 of the World's Crazy Rich Families 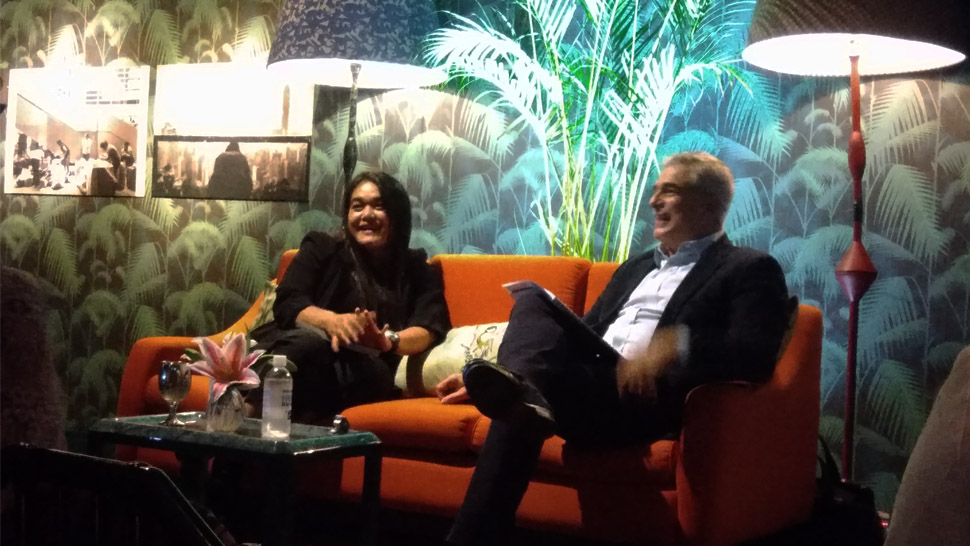