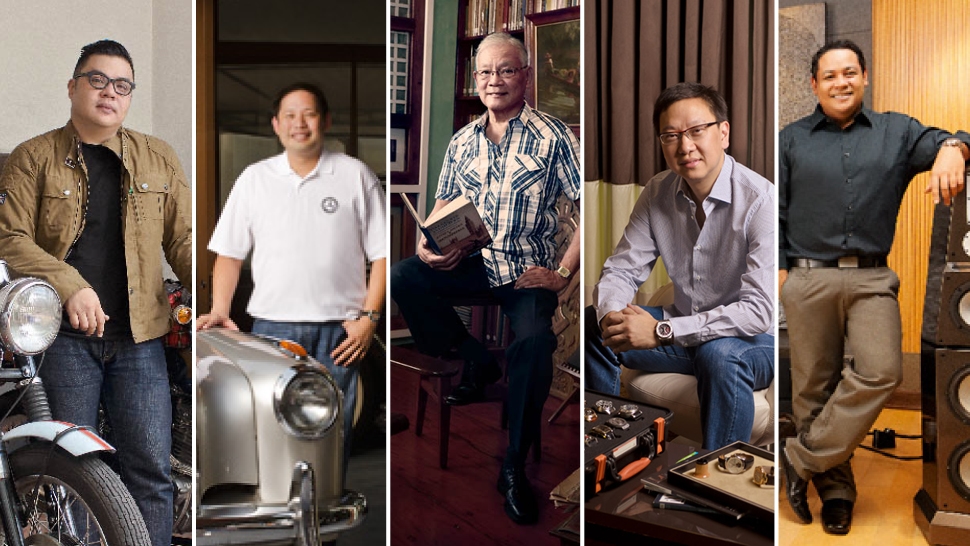 Dante Dizon started collecting Harley Davidson magazines and became a virtual expert on bikes even before his first real ride. That came a few months after he landed his first job, with the purchase of a vintage 1966 Honda 305. Today, among his prized possessions is a 1961 VR6 Triumph, restored over the course of two and a half years, a Harley Davidson Fat Boy, and a 1989 GB400 Honda.

A trip to Japan some years ago broadened his view of the biker culture. “I saw how they were crazy about the jackets, denim, and biker accessories. After that, I felt that I now wanted to make my own.” He partnered with Noli Coronado, a friend who did toy sculpting for the big comics companies, and started 13 Lucky Monkey, which makes bespoke biker accessories. They started with rings and have plans for personalized items like special gas caps, ornaments and the like. 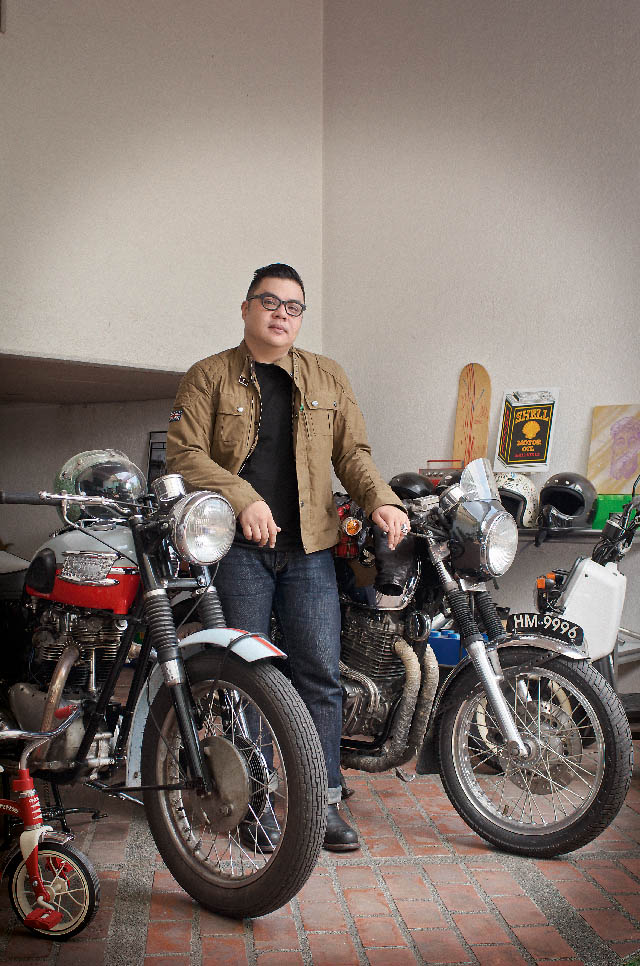 The thrill of the ride is matched only by the thrill of the hunt. Dizon’s search for bikes to buy and restore has taken him all across the country, from side streets in Binondo to barns in Ilocos and farms in Negros. “It all starts with word on the street. People will hear that so-and-so has this bike, so you check it out. There have been a lot of false leads, but once in a while, you turn up great finds like real Harleys or BMWs. Where there’s smoke, there’s fire.”

Behind the gates of a home in a quiet Quezon City neighborhood lies a treasure trove of the most desirable automobiles this side of the world. Welcome to the spectacular garage of Rene Nuñez, the president of the Mercedes-Benz Club of the Philippines.

Nuñez acquired his first car in the early 1990s, a brand-new Lancer as a graduation gift from his parents. After just a few weeks, a newspaper ad for a 1977 Mercedes-Benz W123 280CE coupe caught his fancy. “I offered to trade in my car plus cash after I found out that the owner was looking for a new car for his daughter,” he recalls. Over the years, his job as a banker allowed him to make more acquisitions—a 1980 300TD was his second, but the collection really took off after 2001. “One of my friends asked me to handle the finances of their growing gaming franchise. This gave me some windfall opportunities and savings to seriously finance this hobby. It’s my passion and I guess you can also call it as some form of investment.” 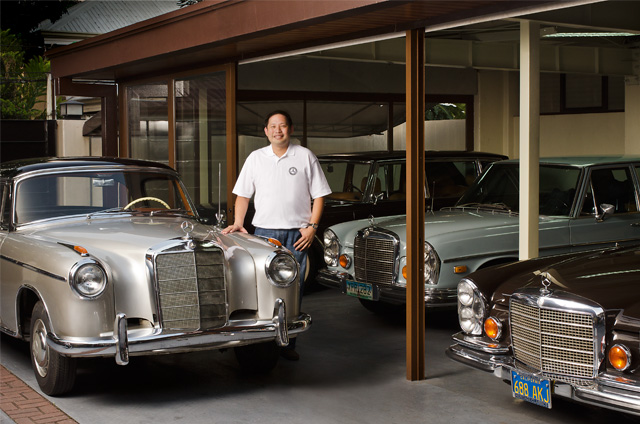 A whiz with numbers, Nuñez is drawn to cars produced during his birth year, 1969. “Among my favorites are my 600 W100 ‘Baby Pullman’ limousine, 280SEb W111 ‘Fintail’ cabriolet, the 280SEL W108 long-wheelbase sedan, and the 280SL W113 ‘Pagoda’ sports car. All are from 1969. Outside of that, another favorite is my 1958 220S W180 ‘Ponton’ coupe,” he says. If you’re wondering whether these beauties ever hit the road, Nuñez offers that his cars are not “garage queens.” He adds, “I am very much a car guy. I can drive my old 1988 classic box-type Lancer and maybe tomorrow I’ll be cruising in a sports car. I still manage to enjoy both cars. I look forward to each driving opportunity, whether it is for a weekend fun run out of town or just around the neighborhood.”

The Laya house has clearly run out of space. The antiques, religious icons, and that the former cabinet minister and Central Bank governor has collected over the years have begun spilling out onto his front porch. Inside, we discover what else takes up space— Laya’s vast collection of books, which neatly line shelf upon shelf throughout the home. The main library is on the ground floor, but the reading room on the second level is where Laya spends most of his time. 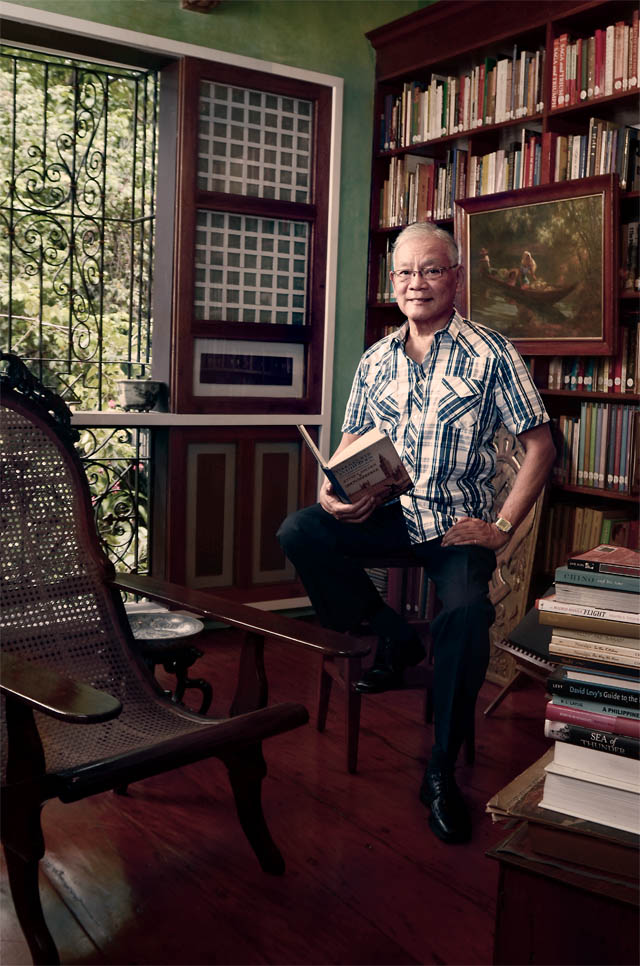 As natural light fills the room during most hours of the day, it’s a conducive spot to leaf through a book or two, with topics on everything under the sun: finance, history, art, architecture, religion, novels, spy thrillers, and more. “I started with coins and stamps, but I really got interested in books when I was studying abroad,” he reveals. While working on his master’s degree at Stanford, he would frequent the Bay Area’s many book shops. As few Americans were interested in Philippine books, Laya was able to accumulate an enviable Filipiniana collection. More prized finds came later, including first editions of Rizal’s Noli Me Tangere and El Filibusterismo, books from the 1700s, and a rare, pristine set of The Philippine Islands, a massive 55-volume compendium by Emma Blair and James Alexander from 1909.

If there’s one title that’s eluded Laya thus far, it is the first edition of Jose Rizal’s annotations of Sucesos de las Islas Filipinas, by Antonio de Morga. “If I find it, fine. If I don’t, that’s fine too. Many of my finds are due to serendipity. The thrill is not so much being able to fill a blank, but the thrill of finding something you didn’t know was out there. Serendipity is my friend.” 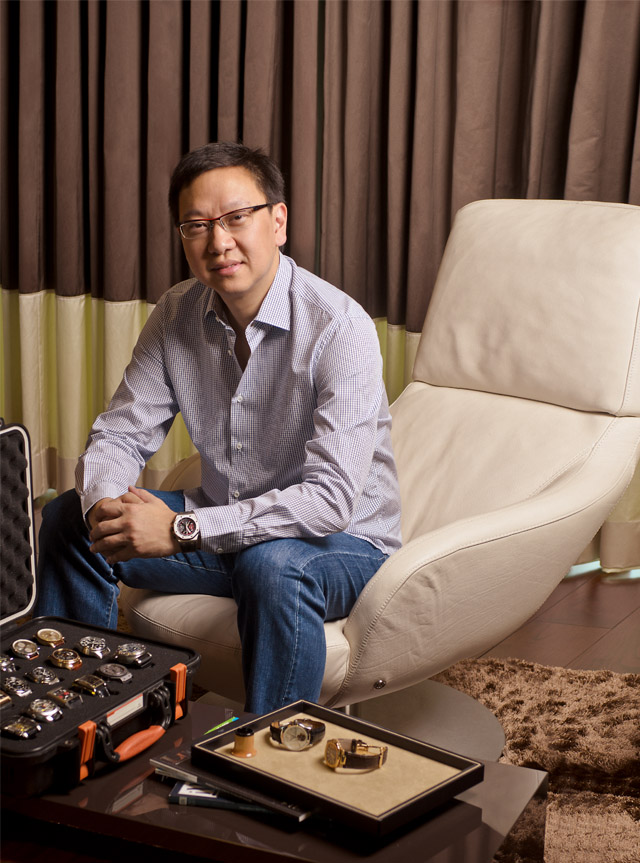 Emerson Yao belongs to the third generation in a family of watch retailers. As is the usual custom among the Filipino-Chinese, Emerson and his brother Ivan started learning about the business at a young age, sometimes manning the family’s first shop in Ali Mall, Cubao, with their grandfather. “I was just 12 or 13 at the time. Then I bought my first watch, a Pierre Balmain when I was around 16, but I didn’t start collecting yet. It was only after I was working full-time at the shop that I started appreciating the high-quality watches.” After inheriting the business, the brothers expanded Lucerne’s portfolio, bringing in the niche high-end brands including Jaeger-LeCoultre, IWC, and Hublot. As the business grew, so did Emerson’s personal collection. “I like contemporary, modern watches. For me, when I wear a watch, I have to see myself in that watch. It has to be ‘me.’ It’s the lifestyle, my character. I like simple things, but I like the big watches. Collectors, even from afar, they know when you’re wearing an IWC Portuguese, the Omega Speedmaster Professional, the first watch on the moon, and Nautilus of Patek.” For daily use, he prefers Panerai or Hublot. “But the one that gets the most attention is the Audemars Piguet Royal Oak Offshore Alinghi Polaris.”

A former congressman of Rizal, Jack has left the political life behind to focus on the business of sound. Puresound Trading, a company set up a few years ago with his cousin Keith Roy and friend Richie Diaz, distributes the ultimate in high-end audio equipment, with Von Schweikert Audio, LAMM Industries, LSA Group, and Critical Mass Systems among its core labels. Where’s their showroom? They don’t have any, but to see and hear these esoteric brands in action, there’s no better place than in basement. 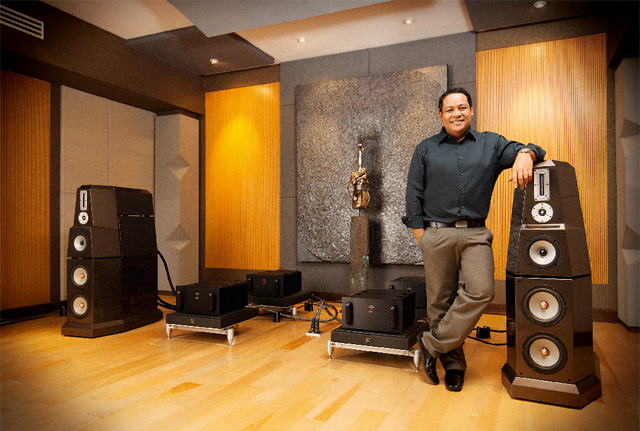 As he would advise his clients, the room is built around the loudspeakers; here, a gorgeous pair of Von Schweikert VR-9 SE’s. “I told the interior designers, pull the palette out from the speakers, so you see bronze, some chrome, it all ties in with the room. The carpet has all kinds of silver, gray, black, brown hues. And the art—paintings by Lao, Luz, and Alcuaz—also comes in to give a contrast.” On the technical side, everything is hidden but optimized. “There’s vibration isolation, acoustic paneling, all the electricals. To build the room, we worked with Mike of TRACKS Acoustics, one of the best acoustic designers in the country,” explains . The proof, as they say, is in the pudding. When he pops in a Diana Krall CD, close your eyes and it’s easy to imagine she’s right there, at you from the center of the room. On his three-armed TW Acustic AC-3 turntable, spins a favorite Johnny Mathis album, with the sound changing perceptively when the different tonearms are engaged. Most amazingly, the whole room is in the sweet spot.

musical tastes run the gamut and he puts his system through the paces, cranking it up to around 100 decibels with a bombastic orchestral piece. “Here, you can pretty much play everything. From small ensemble classical and jazz pieces to new wave, some rock, house, and trance. not so much!” With sound perfection achieved, still has to draw the line somewhere.

This story was originally published in Town&Country Philippines in June 2012. 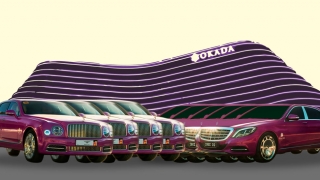 Check Out the Garage with P250 Million Worth of Luxury Cars 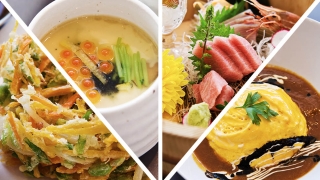 Kazunori Is Your 3-in-1, Go-To Joint for Japanese Soul Food
All Photos
Comments
View As List