Everything that Happened After Ateneo Won The Basketball Championships 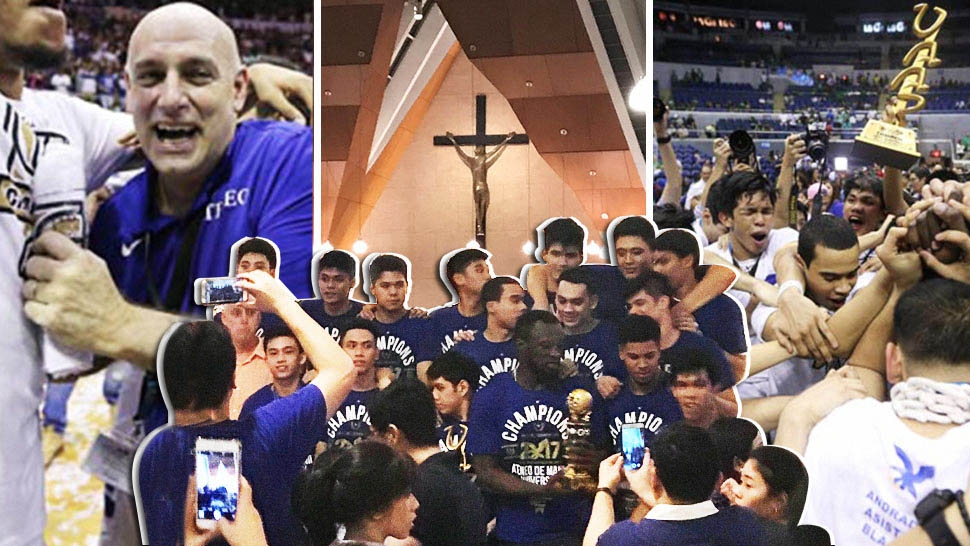 “We shall return and be champions in 2017,” Ateneo head coach Tab Baldwin memorably concluded his speech at the thanksgiving Mass last year, following a sweep by the De La Salle Green Archers in the men’s basketball finals of Season 79. And that they did.

This year’s thrilling best-of-three series saw the Ateneo Blue Eagles draw first blood in Game 1, with a final score of 76-60. The Green Archers made a stunning comeback in Game 2 to force a third meeting, but in the end, the Blue Eagles emerged victorious in the do-or-die match, 88-86—their first championship since the five-peat era that ended in 2012. 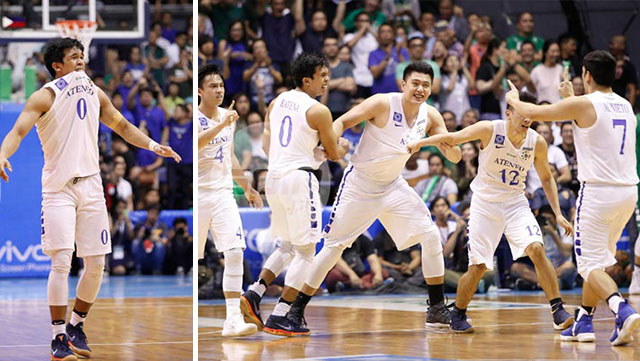 After the initial celebration on the court, Baldwin was seen approaching the La Salle bench to comfort some of the Archers. Later, he addressed the blue side of the : “You inspire us simply to be the best that we can be. We thank all of you for the inspiration that you are to this basketball team. Thank you and God bless all of because you have certainly blessed us.” 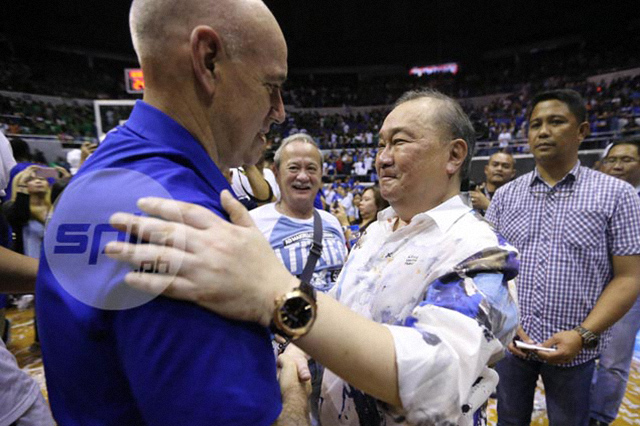 Proving gracious in defeat, the façade of De La Salle University’s St. La Salle Hall on Taft Avenue was illuminated in blue after the game, in a magnanimous gesture of sportsmanship. DLSU’s official Facebook account posted a picture of the blue-lit campus, writing, “We celebrate a good fight. We’re proud of you, Green Archers! To the Blue Eagles, congratulations!”

We celebrate a good fight. We’re proud of you, Green Archers! To the Blue Eagles, congratulations!

Ateneo de Manila, for its part, posted a green banner on its official account that read, “Thanks for a great series. Congratulations, La Salle Green Archers!”

A Day of Thanksgiving

As an annual tradition, the Ateneo community gathered at the Church of Gesu for a Thanksgiving Mass after the game, followed by a short program that allowed Baldwin and the graduating members of the team to share stories and messages. 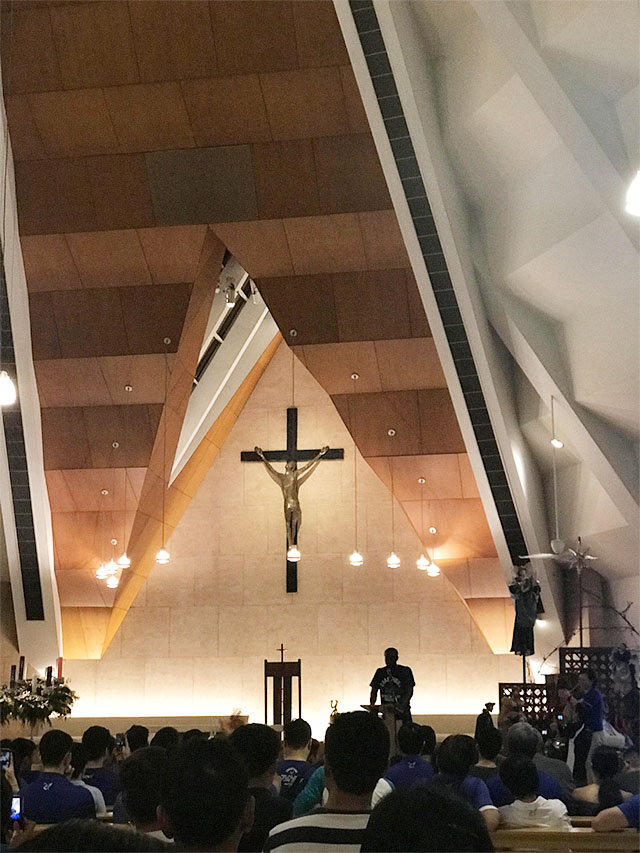 Businessman Manny V. Pangilinan, an alumnus and the team's chief backer and staunch supporter, thanked Baldwin and the team for all their hard work this season. A sweet surprise from the chairman, CEO, and president of SMART, he said he would give all the players new iPhone Xs and would fly them out for a celebratory trip to Hong Kong. 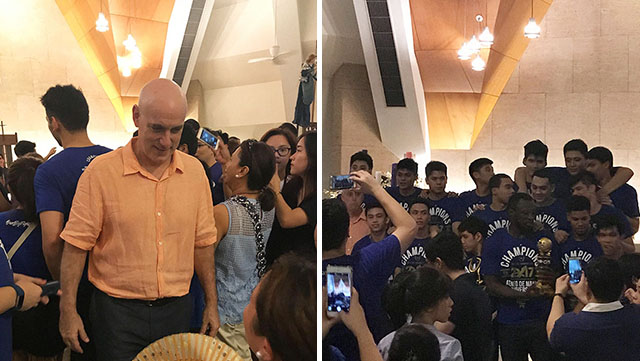 The three graduating students from the team also took their turns at the microphone. First up was Kris Porter.

“In all my years in Ateneo, it was always me on the other side, seeing all my seniors say goodbye. Now it’s my turn to say goodbye.”

“I have never given so much of myself to something… and all I have to say is thank you," he said. "Thank you for giving me the opportunity to be part of something greater than myself."

Chibueze Ikeh, the team's Nigerian , thanked the coaches he had worked with, saying, “I love you all so much. Thank you so much! I wish I could extend one more year… thank you so much!”

Word From the Captain

In winning the championship, the Blue Eagles fulfilled a promise they had made to their team captain, graduating senior Vince Tolentino, at the start of the season. The promised that he would graduate a champion. In his speech following the game, Tolentino recounted his journey as an 18-year-old rookie player, "fresh from Canada, chasing a dream." He revealed that when he came to the Philippines, he wanted to try out for La Salle. But "green didn’t really work out for me and blue was a better fit," he said.

“The first stages of my Ateneo career, I sat on the bench," Tolentino said. "It was very difficult for me, as a teenager, so far away from home, chasing a dream.”

Finally, during his fourth year on the team, he was given the opportunity to step up. “In the distance, a beacon of white light came shining in the Ateneo facilities—Coach Tab Baldwin,” he said, as he introduced his coach. “This man has taught me more about the game of basketball in my last two years than I had in my whole lifetime. With this coach, nothing was to go to chance.” 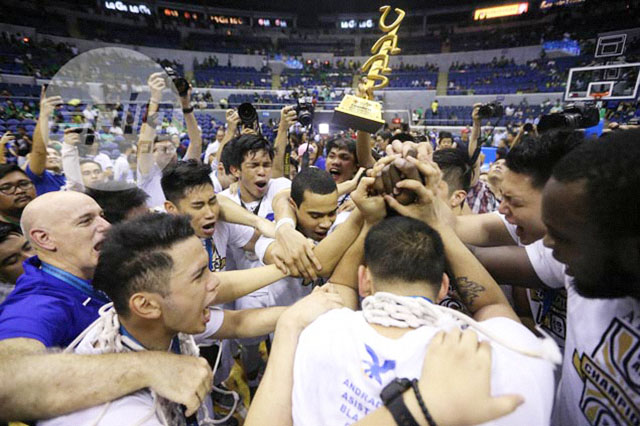 Tolentino thanked his teammates for standing in as his family. “You are the reason why I stand here today, fulfilling my Ateneo dream,” he says. “Every day, I would see you guys whether I wanted to or not. All the blood, sweat, and tears we shed for each other were definitely worth it in the end."

“When it comes to reaching a goal or a milestone such as a championship, you will love the moment when it happens and you will celebrate," he said. "But what you will remember and miss the most is the everyday chase and the people you were surrounded by along that journey.”

It's About the Journey

Baldwin's speech recalled the journey to this win. "I remember vaguely standing here last year. I at how proud the Ateneo community was of our basketball team last year in defeat," he says. "It's grit, heart, toughness, desire, and the Ateneo spirit that could carry you a long way... But there were still gaps to be filled."

I said, 'Just do what you’re capable of doing, do the best of your ability, and be ready. Because when I or the next coach or your future wife or best friend or your mom and dad or your kids one day come to you and say 'We need you,' you need to be ready. 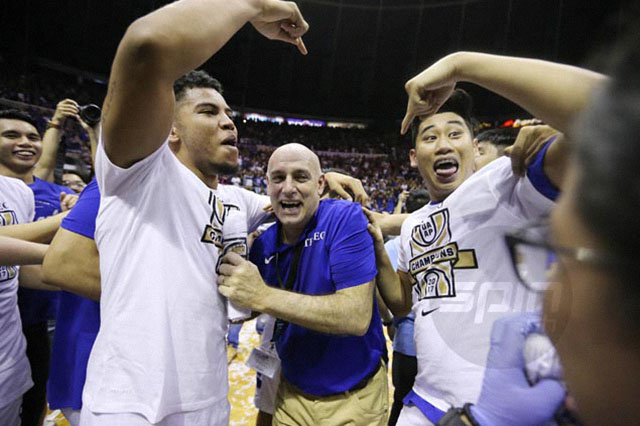 When Baldwin began coaching the Blue Eagles last season, he took over a team that had just seen several star players graduate or end their time with the Blue Eagles for various reasons, leaving him with new key players to build and hone.

He paid tribute to the three players leaving the Blue Eagles this year.

"Vince Tolentino is a unique guy. I wanted a leader. He said to me, 'Coach, I'm not sure I'm the stand out rah-rah kind of guy who could tell them where to go, but I will do my best to show them where to go," he said. "And he did a great job."

For the last two years, training under Baldwin improved his game as evident in his stats, securing the permanent starting position throughout the season and impressing the audience with more shooting presence on the three-point line.

"Ikeh, since I have known him, has been as criticized as any player I've ever coached, oftentimes with good reason," said Baldwin. "Let me tell you about something about Ikeh. This is something a lot of Filipinos can appreciate. He is a young man who left his home, left his country, left his friends, left his family, a long way to a place he didn't really know anything about. And in order to be successful, Ikeh had only one thing to do, which as I have observed is not really very easy. He had to fit in without asking anybody to fit in with him."

Baldwin said it was important for him to gain Ikeh's trust and make him trust his teammates as well. "This was a man who didn't trust me, who didn't trust a lot of people," he said. "But through his teammates, through the work ethic that he had, through some conversations, he started to trust. When he did, he started to grow. You saw it on the basketball court with the rebounds, the baskets, the three-point shots, and the . I saw it when he looked at me and he said, 'What do you want me to do next, Coach?' To that was one of the most valuable things that you can do. So Ikeh, thank you for trusting me."

"So, be ready boys, because obviously this year we validated that extreme hard work works."

Baldwin also applauded Porter and the rest of the team who didn't get to have as much floor time in the finals.

"Kris is a guy who has played successfully. He is a guy who questioned himself when I questioned him: What are you going to do for this team? And what he said to me was always one thing: 'What do you need me to do?' I said, 'Just do what you’re capable of doing, do the best of your ability, and be ready. Because when I or the next coach or your future wife or best friend or your mom and dad or your kids one day come to you and say 'We need you,' you need to be ready, Baldwin said. "When I tapped him on the shoulder, he was always with confidence. It was the confidence that grew in me for him because he did what’s asked and with every effort, he did everything for one reason: his brothers."

Baldwin ended his speech saying he looks forward to the new season that will be starting soon. "So, be ready boys, because obviously this year we validated that hard work works."

About The Author
Manica C. Tiglao
View Other Articles From MANICA 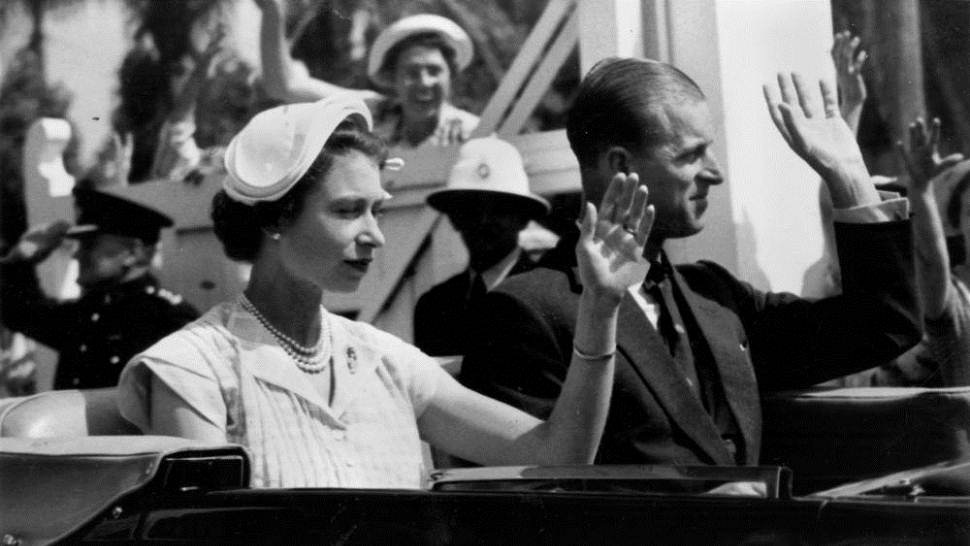 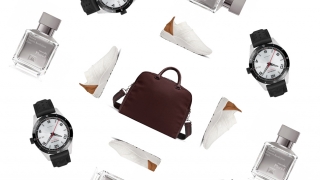