Artist Earns Acclaim for Paintings He Kept Under Mother's Bed

Luis Lorenzana’s paintings were re-discovered 10 years after he had made them. 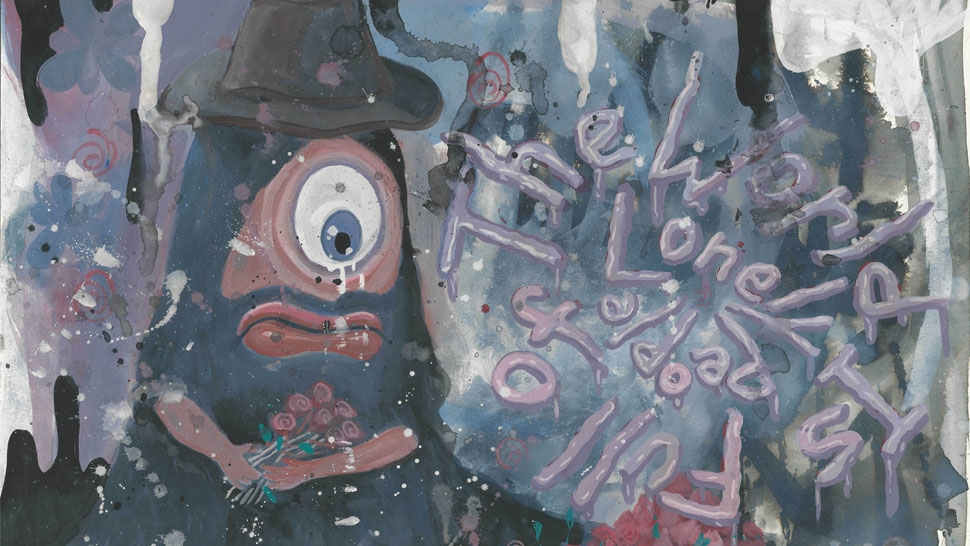 When self-taught artist Luis Lorenzana entered the art world a decade ago, he had just left a job at the Senate. At the time he channeled the distaste he had for dysfunctional governance into his art. That part of his life was manifested in dozens of paintings and sketches. He tackled social, political, and economic issues by visualizing them through quirky, surreal characters with the occasional appearance of heroes such as Jose Rizal and Apolinario Mabini. The timeless themes of beauty pageant obsession, government officials portrayed as animals, and the fading memory of history constantly gave Lorenzana inspiration from 2005 to 2008. 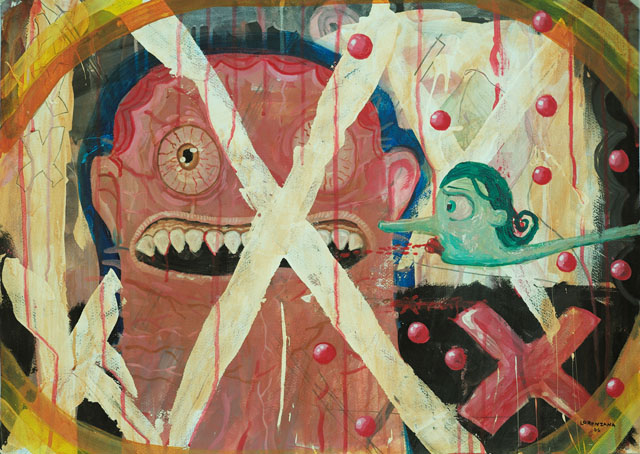 The odds were against Lorenzana at the time, since not many galleries or art collectors were open to showing his work. He would price large paintings at only P8,000 to P12,000 but there were hardly any takers. They were deemed “too controversial” for their time.

Financial struggles led Lorenzana to paint with acrylic instead of oil, on any makeshift canvas he could find. Since he couldn’t afford a proper sketchpad, he cut up a sheet of cartolina and manually punched holes at the top of each page to replicate the look. He painted other works on the opposite sides of used canvases he asked to take home from the art class he used to teach. The works would later be scattered in various hiding places, including one rolled away underneath his mom’s bed. 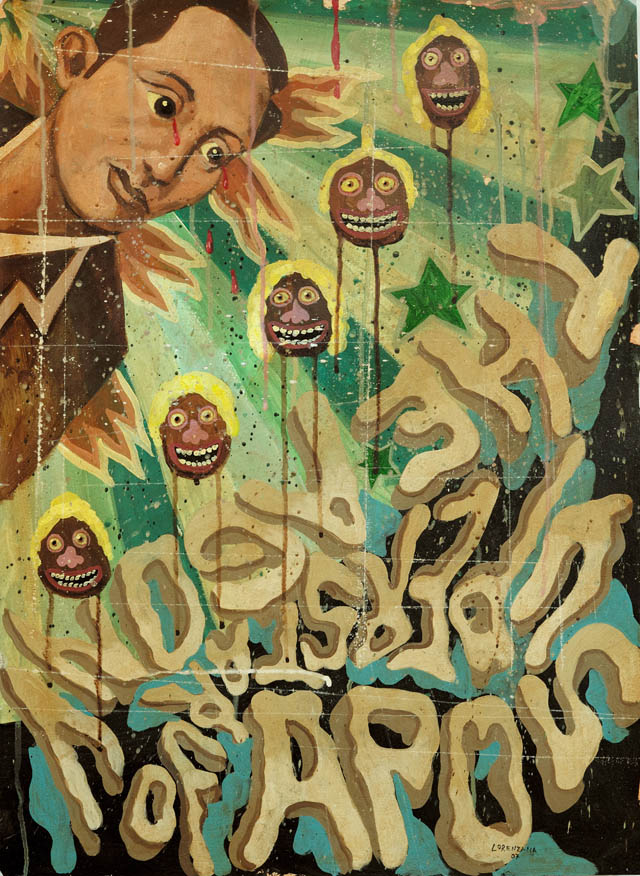 The Agony of Apo Superstar, which Lorenzana says is about our heroes, Apolinario Mabini in particular, painfully witnessing how his fellow Filipinos would like to look American, hence the blond hair.

Years later, a painting depicting a deformed Jose Rizal in pop surrealist style, posing the question, Who killed Jose? caught the eye of Japanese-American art collector Ken Hakuta. It was hung next to the artist’s office and Hakuta couldn’t help but inquire who the painter was, as it reminded him of artists Yoshitomo Nara and Jean-Michel Basquiat. After Lorenzana revealed it to be one of his early works from a series he kept tucked away, Hakuta offered to purchase the collection of over 50 paintings, which Lorenzana slowly agreed to. The artist then initiated a treasure hunt among his family members to locate his lost works. 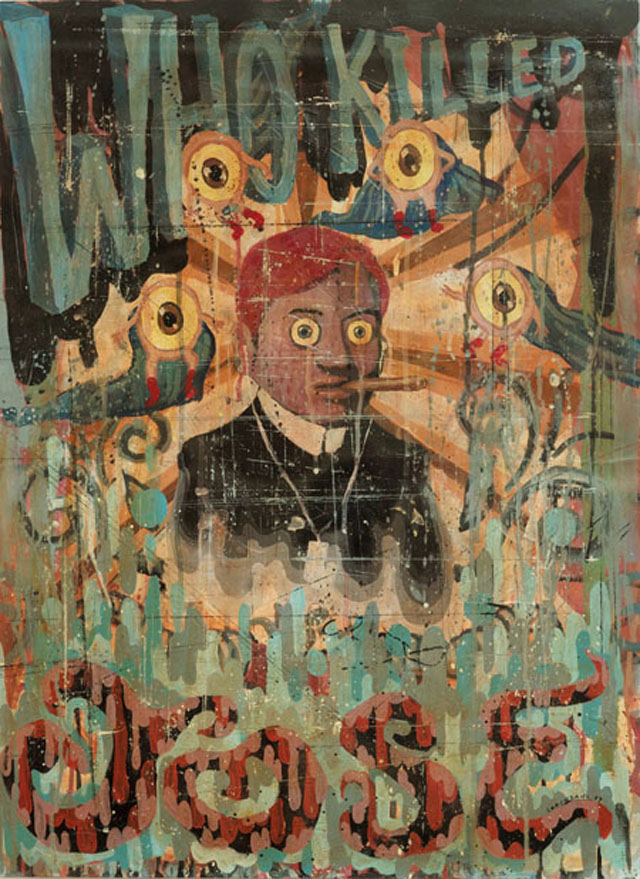 Who Killed Jose, the painting that would eventually skyrocket Lorenzana into recognition.

Lorenzana is now the subject of a book by Michelle Yun, the Asia Society Museum’s curator of modern and contemporary art. Yun believes that the topics are relevant to any given culture, no matter how much or how little they know about Philippine history, “I think Luis was really savvy in incorporating themes that really convey all these universal ideas.” The book includes the esteemed curator’s analysis on Lorenzana’s works, as well as essays by historian Ambeth Ocampo, Lisa Guerrero Nakpil, and Ryu Niimi. A non-profit organization bent on promoting the works of artists in a cross-cultural platform, International Art and Artists is publishing Lorenzana Archival Collection by Yun. They see this move as a stepping stone to further endorsing the collection internationally and hopefully having museums carry it. 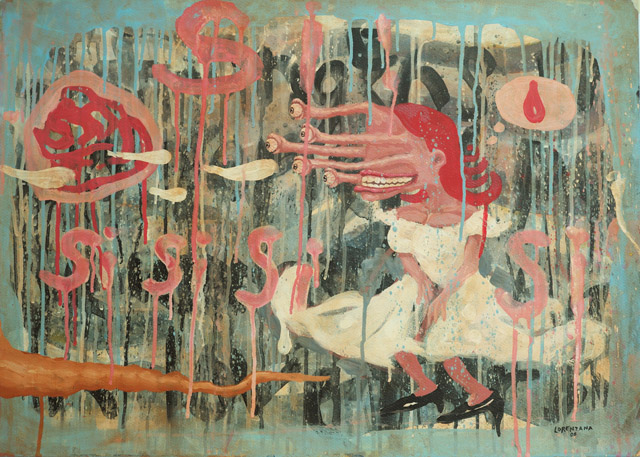 What began as a happy accident is now ending as a success story for this talented artist. The complete collection will be open to the public for viewing from February 2 to 26 at the Leon Gallery, G/F Corinthian Plaza, Paseo de Roxas, Makati City. 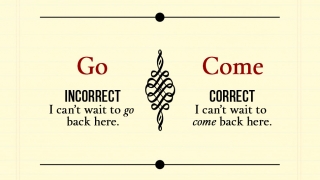 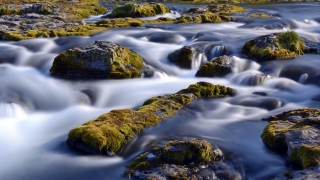