The Most Beautiful Government Offices in the Philippines 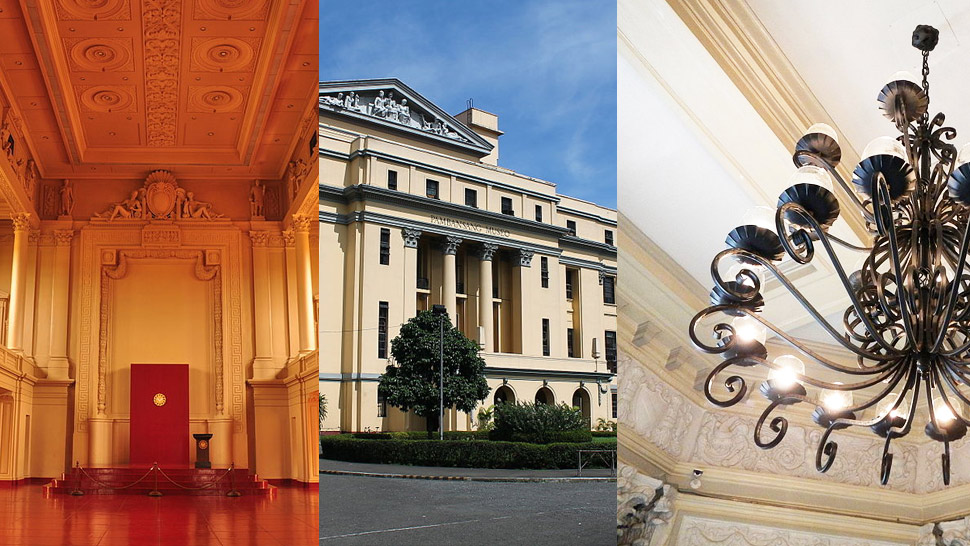 Isabelle Duterte has since moved on to other controversies since her photo shoot at Malacañang Palace earned her quite a bit of, shall we say, unwanted attention. Use of presidential seal aside, however, many of our government buildings really do make for stunning photos, especially since many of them are housed in heritage buildings that are as storied as they are beautifully designed. From their breathtaking interiors to awe-inspiring landscapes and genius architecture, these buildings are worth a second look.

The Department of Finance is one of the government agencies that predates the Philippine Republic itself. It was founded on 24 April 1897 by the Philippine Revolutionary Government and has gone through several overhauls. The lot where the current building stands is due for expansion, with a 20-storey building on the way.

Facing Plaza Roma in Intramuros, Ayuntamiento de Manila used to be the seat of governance in Manila. Also known as Casas Consistoriales, or the Marble Palace, it was originally built in 1599. After undergoing several reconstructions, its final restoration was done in 2009 for P1.2 billion. It was finally opened to the public in 2015.

One of the main attractions of Ayuntamiento is the Marble Hall, a majestic hall with chandeliers worth hundreds of thousands and a portrait of Queen Isabella of Spain.

Aside from showcasing the works of the old masters and historical artifacts, people also go to the National Museum to appreciate its beautiful architecture. The museum complex started out as the Insular Museum of Ethnology, Natural History, and Commerce back in 1901. It also served as the offices of several government agencies.

The National Museum of Fine Arts, designed by American architect Ralph Harrington, is housed in the old Legislative Building. It was intended to be a public library according to Daniel Burnham’s plans for the metro.

NM opens its doors facing the Park To celebrate the National Museum's First Anniversary of Free Admission to all our facilities, we are opening our doors at the National Museum of Anthropology (NMA) facing Rizal Park. Guests can now expect more space and less queues to welcome you to our premiere museum dedicated to Archaeology, Ethnology and Underwater Cultural Heritage. We will proceed to open our doors to the public after a short program with the National Parks Development Council Executive Director Penelope Belmonte as our guest of honor. Our new staff from the forthcoming NM Batanes will be performing the "Fandango Ivatan" to usher guests into the NMA We will also inaugurate the "Tour with a Curator" program, which we will conduct every day at 2:30 pm to interested visitors and is again free of charge. This will be your chance to meet the National Museum's curators, researchers and conservators so you will get the back story of how we keep and make accessible our collections. Persons with disabilities, senior citizens and parents with strollers may use the Finance Road entrance. Watch this space for further announcement. © The National Museum of the Philippines (2017) #natmuseumph #NationalMuseum #philippines #manilaph #manilamuseums #museumstories #museum #rizalpark #luneta #anthropology #ethnology #archaeology #pamana #instakultura #kultura #HeritagePH #unite4heritage

They say that around 5,000 people go to the Bangko Sentral ng Pilipinas office on a regular workday. Some are there to transact business and others visit its Money Museum, which houses a collection of currencies. The paintings that are scattered throughout the building—works of National Artists—are said to be collectively worth P2 billion. Aside from paintings, there are also interesting pieces within the building that can provide as an interesting backdrop for photo ops.

The solid narra table found on the fourth floor was said to be the same table used during the Malolos Convention of 1898. A ceramic planter in the BSP Executive Business Center is actually a 19th Century bathtub. It shares the floor with an antique balayong table and works by four National Artists.

And when you go outside the building? Prepare to be awestruck by their garden.

The Department of Justice stands along Padre Faura Street, in Ermita. It was built in the Neoclassical style, which is similar to the other heritage buildings in the area, including the Philippine General Hospital and the University of the Philippines Manila campus.

As a place that receives diplomats from other countries, the Department of Foreign Affairs need to look impressive. The Carlos P. Romulo library, for example, uses these chic lamp tables. Don’t forget to look up to see intricate designs on ceilings and columns.

Cultural Center of the Philippines

Fundraising and construction for the Cultural Center of the Philippines Complex began in 1966 as the pet project of then First Lady Imelda Marcos. The 62-hectare complex was built to provide venues for various events and artistic productions, with National Artist for Architecture Leandro Locsin designing many of the buildings found within, including the grand, sweeping Tanghalang Pambansa. The capiz-and-crystal chandeliers that light the main lobby were designed by Hong Kong-based interior decorators Dale Keller and Associates, in close cooperation with Locsin, and built by Palayan Lamps.

The opulent construction was mired in controversy. With Marcos' fundraising efforts falling short of the projected P15-million cost of building, the bulk of the funds came from public funds that were earmarked for education. (Not cool.)

Located within the premises of the Cultural Center of the Philippines Complex, the Coconut Palace was built in anticipation of Pope John Paul's 1981 visit to Manila. However, the would-be guest of honor declined to stay in the opulent P37-million structure. Since then, however, the Coconut Palace has instead served as the guesthouse for other visiting dignitaries and celebrities—including Libyan dictator Muammar al-Gaddafi, and Hollywood stars Brooke Shields and George Hamilton. Vice President Jejomar Binay used the palace as his official address during his term of office.

The Coconut Palace pays tribute to the coconut: the structure is octagonal (think of the way a coconut is cut by your friendly neighborhood coconut dealer), and the interiors feature coconut shells and coco lumber along with various hardwoods.