The Hyenas in The Lion King Just Wanted Food. So Why Are They the Bad Guys?

A lot of classic kids movies have pretty regressive messaging around class. 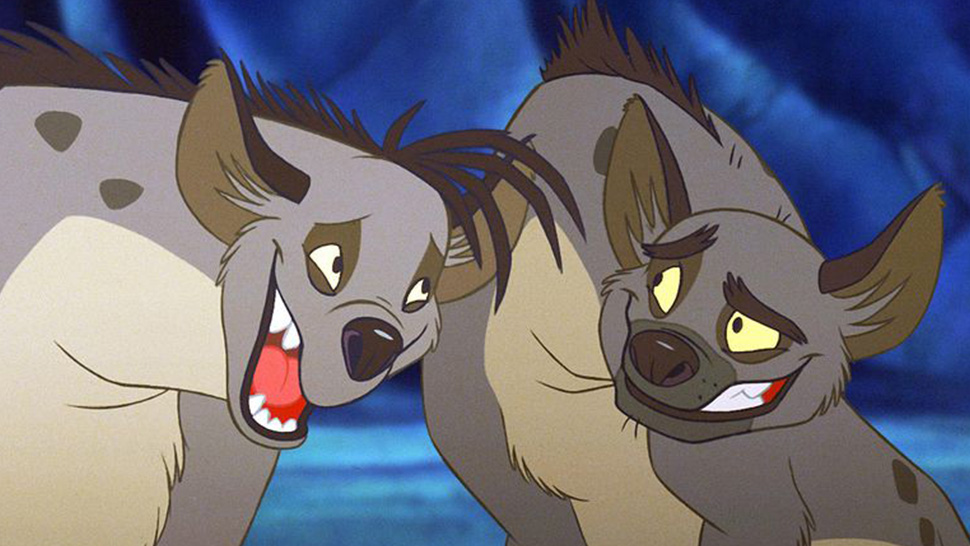 The hyenas in the original Lion King were decidedly among the bad guys, but they had some unusual motivations: they aligned with archvillain Scar in hopes of landing a good meal. “We’ll have food, lots of food,” they sang eagerly, “We repeat, endless meat.”

It’s hard to find Shenzi, Banzai, and Ed (voiced by Whoopi Goldberg, Cheech Marin, and Jim Cummings in the 1994 film) entirely sympathetic, as one of their suppers of choice consisted of adorable cubs Simba and Nala. But even for that, how could we blame them? Every carnivore in the Pride Lands presumably subsisted on a diet of lovable animals with Hollywood-familiar voices. Early in the film, Mufasa explains to Simba that the fact that lions eat the antelope is a natural function of their place in the Circle of Life. The problem with the hyenas, then, appears not to be that they eat meat, but that they’re trying to eat above their station. In the class structure of Pride Rock, Disney pretty much made villains of the hungry poor, outcast animals who just wanted to literally eat the rich.

Immediately after reassuring Simba that it’s only right that they prey upon their weaker subjects, Mufasa instructs his son in the proper way to pounce, using helpless Zazu as a target. Zazu deems the game “humiliating,” but Mufasa thinks it’s funny to see his kid beat up on the staff. I cry as much as the next person when Mufasa dies, but it’s hard not to see the hyenas side of things when they declared Scar’s regicidal plan a “great idea” because “who needs a king?”

The politics of a cartoon savannah shouldn’t be taken too seriously, of course, but regressive class messaging abounds in children’s films. A 2016 study of G-rated blockbusters found that nearly a third of all the main characters in the films were upper class, while another quarter were upper middle class. Just 20 percent of leads were working class or poor.

There have been much-needed efforts to improve representation in kids’ movies in some regards. Female characters less often seem to derive their value from their ability to snag a handsome prince in 90 minutes or less, non-white characters have larger presences. But on other fronts, little progress has been made. Openly gay characters remain almost non-existent. (A touted “exclusively gay moment” in 2017’s live-action Beauty and the Beast turned out to be a blink-and-you’ll-miss-it suggestion of the villainous Le Fou’s interest in men.) And the poor and working class remain deeply underrepresented.

Some movies—Wall-E, for example—take place in worlds onto which familiar class models are hard to graft. But issues of class are poorly handled in many of the films that are providing fodder for the live-action remake machine, movies likeBeauty and the Beast, Aladdin, and The Little Mermaid.

When working-class protagonists are featured, they often end the film in far wealthier circumstances than they began it. “Working-class characters that are primary characters are often portrayed as really loving and warm,” sociologist Jessi Streib, the 2016 study’s lead author, tells me. “We see that a common portrayal as upwardly mobile means that you’re really good, and you’re getting the reward for being such a great person.” Whereas, says Streib, “if you’re a bad person, you’re downwardly mobile, which is not how the world works.”

Of course, little in children’s movies reflects accurately how the world works. But filmmakers and audiences increasingly recognize that media helps shape the landscape of our imaginations. And just as small children are alert to race and gender, “children are definitely aware of class,” says Streib. “There’ve been studies that show that by the time kids are four, they associate poverty with all sorts of negative stereotypes—so being lazy, being dirty, being less smart, and they associate being in more privileged classes with more positive characteristics—being more moral, being smarter.”

“Representation in the fictional world signifies social existence,” wrote communications experts George Gerbner and Larry Gross in a 1976 paper, “absence means symbolic annihilation.” By that measure, class portrayals merit the attention that’s thankfully being paid to other points of representation. This spring’s Aladdin remake had a “no midriff” rule for Jasmine; her red-clad slave routine was also thankfully cut from the movie. But the 2017 staff of Castle Beast still sang that “life is so unnerving for a servant who’s not serving, he is not whole without a soul to wait upon.”

Of course, much of the class imbalance in so many Disney classics is baked into the centuries-old source material for stories like Cinderella or the Hamlet-inspired Lion King. Accordingly, some adjustments would be easier to make than others. It’s hard to imagine Scar murdering Mufasa in order to take control of the family landscaping business. But Ariel would be no less magical were she not a princess and instead a middle-class mermaid from a normal, work-a-day merfamily. (In her match with Prince Eric, Ariel marries outside of her species—but not her class.)

But any attempt to reconfigure the class structures of Disney fantasy feels like it could strip the magic from the films. Many of the children's movie classics that don’t focus on members of the ruling classes—The Jungle Book, 101 Dalmatians—occupy a lesser tier than Aladdin or Cinderella. So much of the iconography of American childhood is House of Mouse trademarked, and so much of it, from the gowns to the crowns to the castle silhouette itself, consists of fantasies of wealth and luxury.

So what does kid movie magic look like without all of that? “I think you could tell stories of working class characters that in the background have the hardships that working class people tend to face but aren’t focused on that,” Streib says. “So you could still have the happy story about a great sibling relationship, or an adventure. Show them not being upwardly mobile, but just having a good time or meeting their goals.” One example far more magical than any of the live-action Disney remakes was Pixar’s Coco, a film about a boy who grows up in a family of shoemakers and ends by celebrating a familial estrangement mended—not by catapulting the clan into wealth.

I loved Disney films growing up, and entertained fervent princess fantasies for years. It doesn’t seem quite as fun for me to imagine Belle clad in anything less luxurious than her yellow gown, or for Ariel to fall for a nice, handsome sailor named Eric who lives in a beachfront cottage rather than castle. But inherited wealth and power concentrated in a tiny ruling class isn’t magic—it’s mundane. Merpeople, flying carpets, and dancing sentient household items are magical, though, and that magic wouldn’t be diminished if accompanied by more progressive vision of class. While it seems unlikely that the new version of The Lion King will have Simba abdicate the throne in favor of democratic rule, hopefully the latest take on the story doesn't make the hyenas villains just for being hungry. Simba should at least send some antelopes their way.