The 8 Best Cigar Bars in Manila

Here are the city's most exemplary bars to smoke cigars. 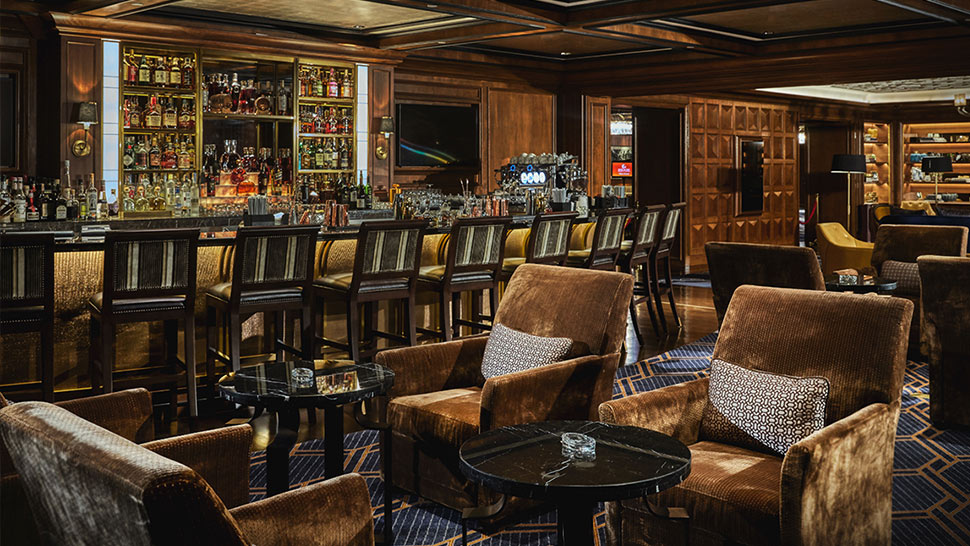 Cigars are deeply rooted in our history as Filipinos. As early as the 17th century, Philippine-made cigars have been celebrated and enjoyed all over the world. In fact, the first and oldest cigar factory in Asia is found in the Philippines. As such, cigar bars in the country have long been a haven for enthusiasts. Though old haunts have closed down, cigars are experiencing a renaissance, with new places popping up every now and then. (Before you go out and enjoy a cigar, make sure you're armed with the dos and don'ts of cigar smoking.) Here's a list, in no particular order, of the best cigar bars in the city.

Discovery Primea's 1824 Whisky and Cigar Bar is named after the year single malt distilleries were given their first license. With muted tones and wood accents, the bar's interiors take you to another world. A celebration of whisky and cigars, 1824 also offers a fine selection of Cognac, wines, and Champagne. It's a cigar aficionados' dream come true: The bar offers cedar spills for traditionalists, and there's a wide selection of Cuban and Dominican options. Not to mention, local and imported favorites such as Tabacalera, Don Juan Urquijo, Mazos, Cohiba, and Montecristo. Discovery Primea, Apartment Ridge Road, Makati

Modeled after a 19th-century Cuban bar, the Peninsula Manila's The Bar is done in gentleman's club-style complete with leather chairs and checkered floors. Located next to Salon de Ning, it's also the designated smoking area at the Peninsula. The cigars lie inside the cigar divan where a leather sofa and lounge chair await. There, you can pick from the bar's menu filled with premium Cuban cigars to pair with your drink of choice. The Peninsula, Urdaneta, Makati

Solaire's Cigar Bar & Poker Room is found underneath the casino floor. It's styled as a sophisticated den complete with wood accents and leather sofas. The highlight of the room, of course, are the cigars. There are local cigars that range from P340 to P1,350 and imported cigars that range from P795 to P19,000. Choose from one of the cozy corners in the room and enjoy your cigar in style. Solaire Resort & Casino, 1 Asean Avenue Tambo Entertainment City, Parañaque

Aside from the Cigar Bar & Poker Room, Solaire has another bar open for cigar aficionados. Located on the VIP floor, the Macallan Whisky Bar is named after one of the leading distilleries in the world—only one of two Macallan Whisky Bars in Asia. There's a long list of sought-after spirits including blended malts, single malts, bourbons, and whiskeys to pair with the bar's wide range of hand-rolled cigars. Solaire Resort & Casino, 1 Asean Avenue Tambo Entertainment City, Parañaque

Mandalay is often referred to as the offspring of the now-closed Mandarin Oriental's legendary Kipling's Cigar Bar since the speakeasy was opened as a love letter by regular patrons of the demolished cigar bar. Hidden inside the Belle & Dragon, Mandalay has an east-meets-west feel. Inside, you'll find authentic Cuban cigars among its wide selection. Aside from cigars, Mandalay offers whiskies from all over the globe. The Lee Watson-curated list includes Japan's award-winning malts to Taiwan's Kavalan and India's Amrut. OPL Building, 100 Don Carlos Palanca, Legazpi Village, Makati

Situated below Elbert's Steak Room, the Riedel Room opened in 2013. It's one of only a few Riedel-named rooms around the world which means drinks are served in barware and stemware from the over 260-year-old European glassmaker. The speakeasy focuses on single malt scotch, fine wines, and Cuban cigars. The selection of cigars includes the Cohiba, Montecristo, Punch, and Romeo y Julieta, to name a few. What makes the Riedel Room is its intimate ambiance as it can only accommodate 20 guests at a time. 2F Sagittarius Building III, 111 H.V. Dela Costa Street, Makati

Alphaland's City Club, a leisure club located on Ayala Avenue, is home to the Tabacalera Cigar Divan. The bar features the country's finest hand-rolled cigars from the oldest cigar factory in Asia as well as single-malt Scotch and Cognac pairings. The club regularly has promos, so be sure to stop by every now and then. The City Club at Alphaland Makati Place, 7232 Ayala Ave, Makati

A post shared by Makati Diamond Residences (@makatidiamondresidences) on May 25, 2018 at 3:31am PDT

Located on the 28th floor of Makati Diamond Residences, the Whisky & Cigar Bar is the perfect place to unwind with a drink and cigar in hand. There you'll find the bar's extensive selection of 27 whiskies with an assortment of cigars to match. With low lights and plush seats, the bar's interiors are done in a way similar to old school English speakeasies. Makati Diamond Residences, 118 Legazpi Street, Legazpi Village, Makati