The History of Tapsilog and Where It All Began

The history of tapsilog began almost 40 years ago. 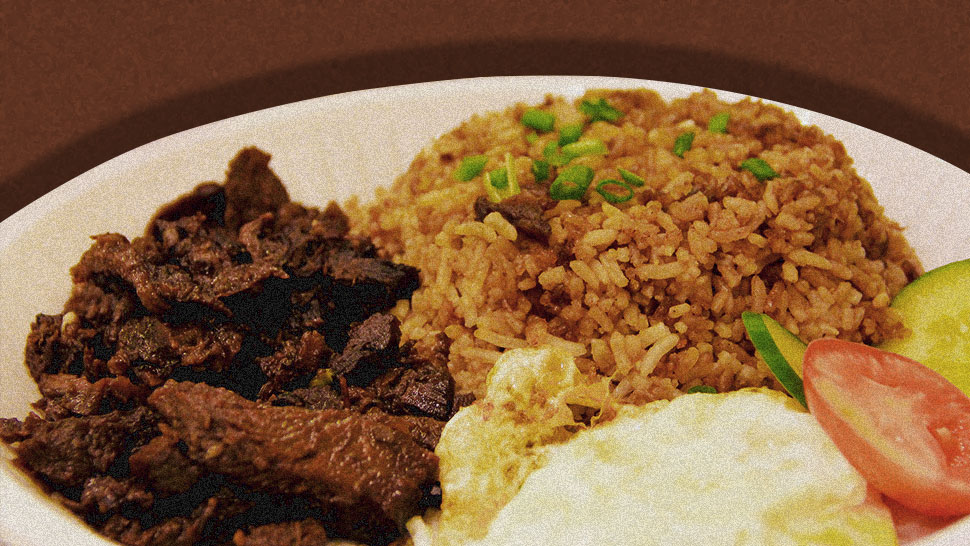 The year was 1986—a momentous year for many reasons: It was the year the Oprah Winfrey Show debuted, the year the Chernobyl Nuclear Disaster occurred, and, closer to home, the year the People Power Revolution shocked the world. As these world-changing events took place, a woman opened a humble tapa store in a little corner of a parking lot, not knowing that she, too, was starting a revolution that would change the country forever. She had no idea that her simple budget meal would become a national cultural icon: the tapsilog.

Tapa is beef, mutton, horsemeat, carabao meat, or goat meat that is dried or cured. In the Philippines, it generally means beef that is smoked.

The word tapa is a Spanish word that means to cover or to seal. The word , which literally translates to "prepared by smoking," has the same etymological origin as . In Filipino, means smoked fish, usually .

In the Philippines, tapa can be cooked by frying or by grilling. When it is served with fried rice and egg, it is called tapsilog. Sides to tapsilog may be atchara and sliced tomatoes, with vinegar as .

Where did Tapsilog Originate?

Vivian Del Rosario popularized the beloved tapsilog, including its name. In 1986, she opened a simple canteen that catered to the masses: jeepney drivers, tricycle drivers, and people on a restricted budget. She named the store Tapsi ni Vivian at Bulaluhan, where she sold and tapsilog. Her original store was located at a parking lot at Lauan Street corner Molave, Project 3, Quezon City.

“I thought of inventing names for my meals… I was the first one to call the tapa, sinangag, itlog as tapsilog.”

With a starting capital of only P1,000 every day, Del Rosario was able to earn a profit of P2,000. Del Rosario simply rolled up her sleeves and began to do what she loved best: cook delicious meals. Her tapsilog became one of her bestsellers. She designed her tapsilog as a budget meal that was quick to prepare, tasty, and filling. For her customers, who were always busy, it was a good meal that was easy to eat.

What is Tapsilog and How Did It Get Its Name?

Tapsilog is a portmanteau formed by combining three words: tapa (cured meat), (fried garlic rice), and (egg). These three things represent the composition of the dish, which is traditionally served for breakfast. The term tapsilog was a product of the ‘70s rave that permeated through the ‘80s about portmanteaus, permutations, and combinations of Filipino and foreign words such as Mayor Isko’s , , , and others such as , , , , , , etc. “I thought of inventing names for my meals,” said Del Rosario in an interview on My Puhunan in 2014.

Del Rosario’s naming gimmick gave birth to numerous other variations on her recipe.

Tapsilog Was Built on Passion and a Lot of Grit

Looking back to 1986 when her business was just a fledgling store, Del Rosario reminisced about her humble beginnings, which was founded on her passion for cooking, and a lot of grit. “It was really difficult because when you start small, you really have to work hard. Work hard for it, wake up early, and cook,” said Del Rosario in an interview with ABS-CBN. “I would wake up before dawn at around 4 a.m., then go to the market, cook food, and then sell these to the jeepney drivers.”

Although Del Rosario kept her meals at a budget price, she made it a top priority not to compromise their taste and cleanliness. “You need to cook really well, the foods must be delicious, clean, and of course, you should always be polite to your customers. You should never be arrogant or boastful. You have to look back at where you started,” said Del Rosario in the interview.

Because of her grit and attitude, Del Rosario managed to expand her business and upgrade to better locations. She opened other branches in Marikina and parts of Quezon City. Soon, other sidewalk stores began copying her recipe and the name of her dish and other variations of her invention. Collectively, these variations are known as : any viand paired with and . Arguably the most popular of these is the tapsilog. Below are just some of these dishes:

The Best Tapsilog in the Metro

Tapsi ni Vivian has now elevated itself from a humble sidewalk eatery to its position as one of the best makers of tapsilog in the country, which is sort of expected because it invented the dish. Its tapa, reasonably priced at P115, is characterized by its tenderness and rich flavors. Apart from Tapsi ni Vivian, the following places serve some of the best tapsilog you can find in Metro Manila.

Manam Café’s House-made Tapsilog (245) – When tapsilog becomes an art form, you get this masterpiece that is garlicky with plenty of texture from its crispiness.

Sinangag Express’ Tapsilog (P99) – Fine threads of tapa accented by sweet and sour spices make this the midnight go-to for your tapsilog cravings.

Rodic’s Diner’s Tapsilog (P99) – Its sweet and salty tapsilog paired with a nice vinegar can go a long way.