You read that correctly: This list contains movies that have answered your prayers and made all of your sex-obsessed dreams come true. They all feature plenty of sex, and, unlike most of the sex you see onscreen, the moments of hotness in these movies is all completely, totally, and one hundred percent real. It's intense and kind of hot to see people have sex in a movie and know it's actually real, and that's what you'll get with these movies. As you might expect, a lot of these movies are indies and foreign films—realms where pushing the envelope, especially in the realm of carnal pleasures, is more accepted.

This 2006 comedy is one of the better-known movies of this particular subgenre. The film centers on the happenings at an artsy sexual salon in Brooklyn, and chronicles one woman's very explicit adventures in trying to achieve orgasm (FYI, actress Sook-Yin Lee was almost fired from her radio because of this movie, but kept her job thanks to the support of A-listers like Gus Van Sant, Francis Ford Coppola, and Yoko Ono.

If you like your unsimulated sex with a side of hipster angst, look no further than 2005's 9 Songs. The film is essentially about a couple who (a) attend concerts by aught bands like Franz Ferdinand and The Dandy Warhols, and (b) have a ton of sex. and it's very, very real.

Remember when The Brown Bunny came out in 2003 and no one could stop talking about the oral sex scene between Vincent Gallo and Chloe Sevigny? It remains one of the most notable unsimulated moments in film.

This circa-1980 thriller by William Friedkin stars Al Pacino as a cop who's trying to find a serial killer targeting gay men. The film's original version featured footage of gay sex, and while some frames remain visible in the final cut, a lot was deleted to nab an R rating. (Upon its release, this movie caused quite a bit of drama, and was protested by gay rights activists who felt stigmatized.)

Intimacy is a 2001 British film about a man who falls in love with the woman he's having casual sex with—only to realize she's married and has no plans to leave her husband (sorry, spoiler). The sex is real, which is pretty rare for a mainstream movie that won Best Film at the Berlin Film Festival.

Lie with Me is a 2005 indie drama about a man and woman's affair—and stars two pretty well-known actors: Eric Balfour (who plays Milo Pressman in 24) and Lauren Lee Smith (who plays Riley Adams in CSI). The movie premiered at the Toronto International Film Festival, but wasn't exactly a critical success.

Don't Look Now (a true gift from 1973) has a very intense, very au natural sex scene between Julie Christie and Donald Sutherland, and it was all kinds of controversial for (a) featuring oral sex on a woman, and (b) maybe being unsimulated. Basically, some people say they did, some say they didn't, and no one will ever know the truth. What happens on the set of Don't Look Know stays on the set of Don't Look Now.

Yup, Lars von Trier is back at it. This 2013 film starring Charlotte Gainsbourg, Stellan Skargard, Shia LeBeouf, Christian Slater, Uma Thurman, and Willem Dafoe (among others) featured unsimulated sex per usual—but there's a catch. The actors simulated sex, and the body doubles had IRL sex, and their genital area was superimposed on the actors. #normal 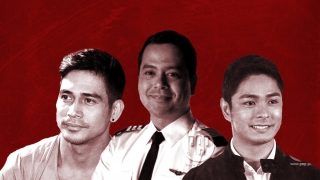 What Makes The Ideal Filipino Leading Man: A Thorough Analysis
All Photos
Comments
View As List