Imagine playing Bangsak in Luneta with that doll. 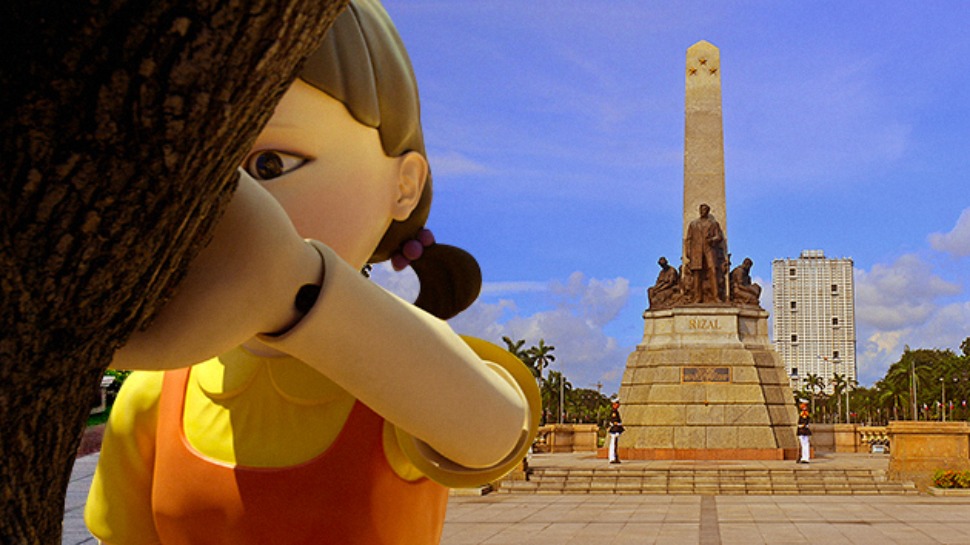 Hundreds of people forced by their terrible life situations into a game of life-or-death on the daily; no it's not real life, it's Netflix's Squid Game. Okay, on second thought, that statement applies to real life, too.

The South Korean series has taken over practically every Pinoy's watch-list since it dropped on Netflix and its premise is actually more relatable than you think. Hundreds of people down on their luck (read: badly in need of money) join the Squid Game for a chance to win billions. The catch? They have to compete in brutal versions of childhood games where you don't just lose if you lose—you die.

Something about Squid Game definitely hit a chord among us Pinoys—which is why we decided to play Host and think up what Squid Game would be like in Metro Manila. And just to hit home even harder, we didn't "translate" the games they played on the show, but thought up new challenges based on typical Manila life! Though truth be told Pogs does seem like the perfect snare in place of Ddakji.

Day 1: Pepsi 7Up on the MRT Stairs

You know how the stairs at all the MRT stations can be pretty intense? Okay, that’s an understatement—especially when you’re talking about the multi-level stairway-to-heaven at Shaw Boulevard station northbound side. You know the one—the staircase starts from the sidewalk to the concourse leading to the train station. It is also directly connected to Shangri-La Plaza Mall—at the building’s fifth floor to boot. Which is what makes it the perfect setting for a game of Red Light, Green Light, a.k.a. “Pepssiiiiiii, Seven Up!” Plus, the limited space for many players and the dizzying height make it all the more challenging.

Imagine a massive game of Bangsak at Luneta Park! Sounds like a whole lot of fun, honestly, but what if you had to play it with a smaller version of that doll as the taya in the middle of the night? Just got a whole lot creepier, didn’t it? In a barricaded section of the park, probably right behind the Jose Rizal monument—he’s probably rolling in his grave right now at this 21st-century sakit ng lipunan—the players will have to find a place to hide from the doll. Folks who played this freeze-tag game can probably see it now. The doll will go around looking for players and “Bang” them once spotted (you know how it goes on the show) and to survive, players will have to find a way to sneak up on the doll and tag it while saying “Sak.” Tough luck that there aren’t really a lot of places to hide in that area of the park—sorry not sorry, we don’t make the rules!

The next day, players left are dropped off at a busy LTO office—imagine COVID-19 never happened in this dimension (almost makes us wish we live in this world)—to have their driver’s licenses renewed with a time limit of four hours. We’ll even make sure they have all the necessary documents! We’re not that cruel. Thing is, that LTO will be operating like any other day so players will have to strategize their way into getting their new licenses ahead of everyone else lined up there—legally. Emphasis on legally. Anyone who tries to bribe or get a fixer or anything is taken away permanently. Only those with their new licenses at the end of the four hours—and we mean the actual card and not just a receipt—can move on to the next round. Those who aren’t successful are left trapped in red-tape Catch 22s for the rest of their lives.

So with all the physical stress of the past few rounds, we thought we’d take it easy with a digital game for the fourth one! It’s deceitfully easy-looking. The players will just have to scroll through their Facebook feeds and identify if a posted article, or even just a picture of an article or some supposed fact, is indeed real or fake—without Googling anything. Those who guess wrong are left to read Facebook comment sections on controversial posts until their souls wither and dry out completely. We think that’s how trolls are born.

Day 5: Langit Lupa on the MRT

“Saksak puso, tulo ang dugo / Patay, buhay, naglulupasay” just has to be incorporated into Larong Pusit! So after the chant, players have to run away from the taya, who just so happens to be Julie’s Bake—whoops, the Doll of Death along the tracks of the MRT-3, starting from Santolan-Annapolis station with the finish line at Boni, making for the perfect pattern of a long, short, long stretch. “Langit” will be the station platforms—so here’s hoping the players have great stamina. There’ll be no switching of roles here so players will just have to do everything to outrun the doll! Oh, and yes, there’s a time limit to how much time you can stay on the platform: around five minutes, enough time for the doll to catch up and make “Langit” become a little too literal if you try to get off.

Day 6: Race From North to South on EDSA—on a Monday Morning

If that last round wasn’t enough of a stamina test, we’re bringing the players back to EDSA—and this time they’ll have to race through the entire stretch. No commuting though! They’ll have to walk all the way through the pedestrian hell that is the sidewalks of EDSA. We don’t even have to station dolls of death in this round to make it a challenge, we’re just going to make sure we do it on a Monday, 7 a.m., while raining for good measure. Yup, they’ll have to walk through around 20 kilometers of all that if they want to win the prize! At this point we’re pretty sure there’ll be enough players (read: so few) to make sure the sabotaging will be on an epic, heart-wrenching scale like on the show.