The singer-songwriter also stresses the importance of collaboration. 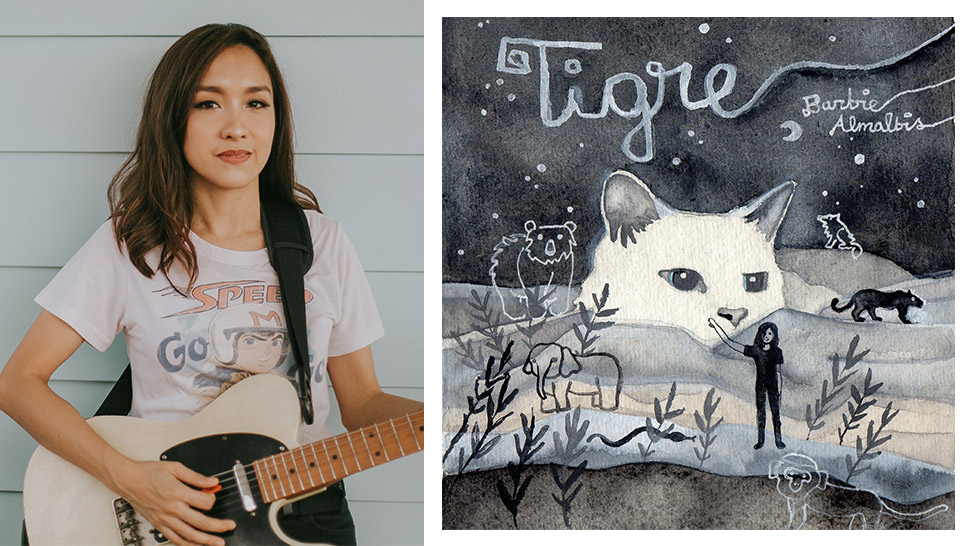 Barbie Almalbis was the voice of a generation. Her songs, alongside those of contemporaries Kitchie Nadal and Aia de Leon, played endlessly on music channels and radio stations; the singers' voices even graced commercial jingles. Almalbis’ career stretched for years, first with the bands Hungry Young Poets and Barbie’s Cradle, and then going solo in 2005.

For an artist whose work has been described as equal parts earnest and uplifting, Almalbis’s persona doesn’t stray far from the mark. Led into their Marikina home by her husband and painter/fellow artist Martin Honasan, we catch her in the deep throes of conversation with friends, talking about everything from the EP launch to which supermarket pizza is superior.

In true Pinoy fashion, husband and wife invite us to join them for a meal, before Almalbis clicks back into conversation, talking about a friend’s recent wedding. One of Tigre’s songs was actually written for Nikko Rivera, Almalbis’s keyboardist and the groom in question. The song was co-written by Almabis and friend and bride Michelle Rivera (neé Lim), and the two managed to keep it a secret by switching out key words during the recording. The actual song was released at Lim and Rivera’s wedding: Rivera hasn’t stopped listening to it since.

Almalbis’s work has always thrived in hearts of the matter such as these, but Tigre finds the artist with a newfound appreciation of collaboration that, she argues, has made her work stronger and helped enriched her artistic practice.

On getting back into the groove

She makes it clear she’s never been absent from music, per se. “Ever since the last album [in 2014], I’ve been trying to write,” she admits. “Para siyang homework para sa akin, practice. But I couldn’t really finish a song in the last however many years. I couldn’t really write something that I was happy with. And then one time, my phone got reset. Two years worth of material, (gone). But I wasn’t sad, because I didn’t like any of that.” Tigre, then, is less a product of divine intervention than it is a testament to Almalbis plugging away until she found something worth sharing.

If there’s one word that sums up the essence of this project, or even Almalbis’s view of her craft, it’s collaboration. She teamed up with husband Honasan on one track and adds that working with him was relatively easy since both artists have, by now, figured out how to deal with each other’s process (and thus when to intervene). Almalbis says that working with her husband has also allowed her to brush up on her Tagalog, a charming aside that you wouldn’t expect from someone whose hits include “Torpe” and “Tabing Ilog.”

“He’s hacked how I write,” she says. “One day we were jamming and he said ‘Sige try natin,’ and so I would give the thought and I’d supply the chords and the melody and I’d ask ‘Okay, sige, how do I say this?’ He’d give me all the Tagalog words and I’d play with it.”

When it comes to collaborative songwriting, though, Almalbis learned it through her worship band. “All of the songs that we release are always written by at least three people, sometimes five,” she shares. “We even had workshops on how to collaborate.”

How does one teach collaboration when it comes to songwriting? It’s surprisingly a lot like improv comedy: you have to relinquish some control, have some trust in one another, and learn to say, ‘Yes, and...’

This shift towards collaboration, especially when it comes to songwriting, is something Almalbis sees as just blossoming in our music scene. She cites the fact that most of the top 10 songs on Billboard are written by a team of people, while in Manila, it’s “Puro solo lang, and it’s always been that way.

“Everything is a collaboration now. There’s something that you can come up with that’s better. Of course may beauty rin naman when you do it on your own, pero…mabilis din kasi kapag nag co-collaborate eh, kasi may mga baon kayo na ideas.”

On the new guard

Almalbis’s sister-in-law is Kai Honasan (who is now married to Eco del Rio, bassist of rock outfit Chicosci), the keyboardist and vocalist for indie pop-rock unit Autotelic. The two are also neighbors, which means Almalbis gets to hang out with Honasan’s contemporaries like Clara Benin, Reese Lansangan, and Munimuni.

“I see a sense of community within the bands today, more than before,” Almalbis says. “That’s something great that they’re nurturing. I always tell sina Kai that it’s nice to see…parang nowadays, yung buong scene, ang dami nila and they’re all supporting each other.” Almalbis has a big smile as she says this, gushing over the current state of Filipino music.

So effusive is Almalbis’s praise of the music scene’s new guard that she’s at a loss when pressed about what she misses most about the early days.

She then confesses that she does appreciate the sense of control that comes with a record label. “Dati I would go to a label and I would present 20 songs, and they would like four.” She laughs, “Of course [with] those 20, gusto ko yun lahat. But I would have to come back and present another 10. It was like that usually. I’d come up with half of the album then I’d come back with the next batch.”

She pauses, thinks again. “The quality control pushes you to be better.”

Now left to her own devices, Almalbis, finds that it’s usually on her to keep some level of quality control, which then, of course, is the reason why Tigre was five years in the making to begin with.

On what she’s learned

It’s often said that great artists are people who are rarely satisfied with their present state. While the rest of us are content with a pat on the back for a job well done, they’re chasing the next big breakthrough, motivated by the sheer joy of creating.

They’re also the first ones to admit, however, that these bursts of joy often come few and far between, and the process for reaching each peak involves a lot of head-scratching and endless drafts.

She’s refreshingly upfront about her struggles with writing, saying that it’s something she’s still coming to terms with. Her face scrunches up in thought when she says, “I mean, I ask myself ‘Is that really the nature of it, where you really have no control?’ When you know how to make a table, you can make a table any time. Sabi ko, parang ganun ba yun? Ganun ba yung songwriting, na minsan you don’t know how to write? That’s what I’ve been trying to figure out in the last few months. Di pa sya tapos.”

While some artists like to listen to a lot of different songs to get inspiration when crafting, Almalbis assures us that she’s not that type: she doesn’t like to listen to anything at all, doesn’t like her mind to be crowded with things other than the song that’s trying to come out. There’s a metaphor in there, somewhere, about the perils of growing up, a kind of Peter Pan fable for the artistic community.

“When life happens, a lot of things can burden your creativity,” she says. “When you see children, they’re so creative, but you grow up and you start to have all these other burdens.”

Almalbis cites the likes of Jungee Marcelo as songwriters she admires for their ability to keep churning out song after song. She also mentions her husband as a source of inspiration, saying that her marriage to a fellow artist continues to inform her own thinking about what it means to be creative.

“I’m coming to a realization baka it’s not that elusive,” she states, mentioning how Honasan can conceptualize, create, and present exhibits pretty much year-in and year-out. She’s noticed that this need to create has fueled her husband’s process in turn, where he’s cultivated a mindset that lends itself to consistent output.

Perhaps it’s as simple as that, and all Almalbis needs to do is to take some time to shift back into gear. Tigre seems to be the result of an artist stepping out of a creative rut; Almalbis shares that she’s written three other songs with Honasan that she hopes to release soon.

View More Articles About:
Music
More Videos You Can Watch

Fête de la Musique: Free Concerts Around the City Plus a Chance to Win a Trip to France
All Photos
Comments
View As List