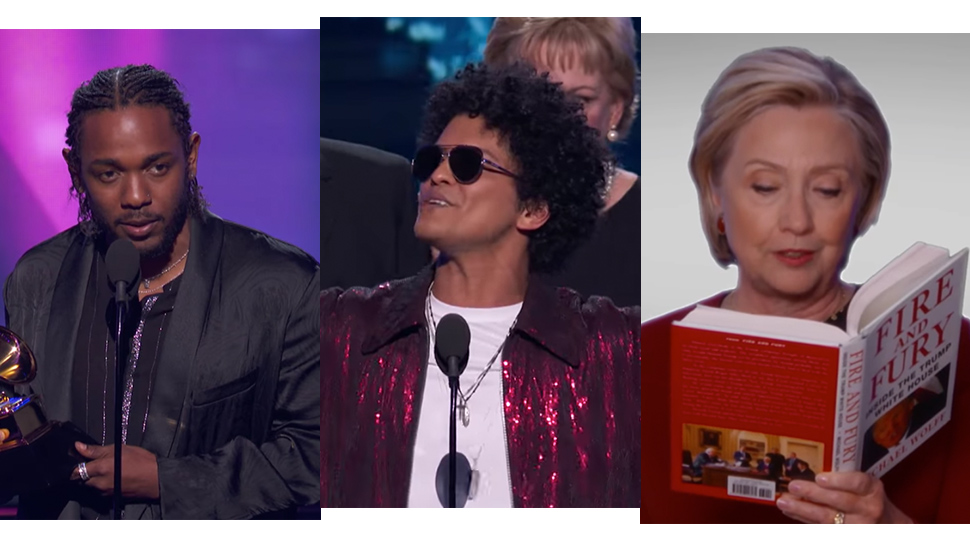 The most prominent awards night in music had its 60th run yesterday evening, and lived up to its annual tradition of big, significant performances that are likely to be cemented in the annals of pop culture. When the nominations were first announced months ago, the 2018 Grammy Awards were already heralded as among the best in years (or at least, better compared to last year’s, which saw nominations for Twenty One Pilots and some guy named Lukas Graham, for whatever reason). And while this year’s results are far from perfect—Kendrick Lamar and Childish Gambino deserve way more than they received—it was a pretty solid evening altogether. If you missed it, here are the highlights.

Bruno Mars sweeps three big awards.
His hit album, 24K Magic took home Album of The Year, beating out Childish Gambino’s Awaken My Love, Jay-Z’s 4:44, Kendrick Lamar’s DAMN., and Lorde’s Melodrama. The album’s lead single of the same name, “24K Magic” took home Record of The Year, beating out “Despacito”, “Redbone”, and “HUMBLE”. And another one of its singles, “That’s What I Like” took home Song of The Year. (The Grammys website describes the difference between the latter two: “Record Of The Year deals with a specific recording of a song and recognizes the artists, producers and engineers who contribute to that recording, while Song Of The Year deals with the composition of a song and recognizes the songwriters who wrote the song.”) Altogether, they’re still predictable wins for the more commercial nominee among them, but you can’t complain—24K Magic is pretty airtight.

Sir Elton John performs with Miley Cyrus.
The British rock icon Sir Elton John has been known to have young artists join him for Grammy Awards Nights performances. He was up on the Grammys stage with Eminem in 2001, with Lady Gaga in 2010, and with Ed Sheeran in 2013. This year, Miley Cyrus joined him for “Tiny Dancer”. They performed his classic song while a white rose lay on his piano, in symbolic support of the Time’s Up movement, for which several artists wore a floral motif that night.

Hillary Clinton reads Fire and Fury: Inside The Trump White House.
In a comedy sketch intermission, various artists including Snoop Dog, DJ Khaled, and Cardi B took part in mock auditions to voice the audiobook version of Michael Wolff's Fire and Fury, the scathing insider’s look into U.S. President Donald Trump’s White House. After all the musicians had their turn, Hillary Clinton took hers.

Shaggy and Sting join James Corden in a self-deprecating New York version of Carpool Karaoke.
Instead of the carpool lane in Los Angeles, the New York subway became James Corden's venue for celebrity karaoke humor. He's joined here by Sting and Shaggy ("It Wasn't Me"), for a performance that was destined to fail.

That might have been the wokest Grammys night in recent memory.
At almost every stop, artists and celebrities were making statements about sociopolitical issues. Kendrick Lamar’s performance took on violence and racism. Sir Elton John and Miley Cyrus support the Time’s Up movement. Hillary Clinton (and a lot of other artists) took shots at Donald Trump. Kesha dedicated her performance of “Praying” to the #MeToo movement. After performing his suicide awareness single “1-800-273-8255”, Logic called out Donald Trump’s “shithole country” comments. U2 called out those very same comments. Camila Cabello stood up against Trump’s protectionism. Country singers Eric Church, Maren Morris and the Brothers Osborne performed “Tears in Heaven” to mourn the victims of the Las Vegas shooting. All these issues were given a platform on this year’s Grammy Awards night.

A Guide to the Horrible Songs That Will Probably Win Grammys