8 Philippine Landmarks That Were Taken From Other Countries

No visa, no jet lag, nothing. 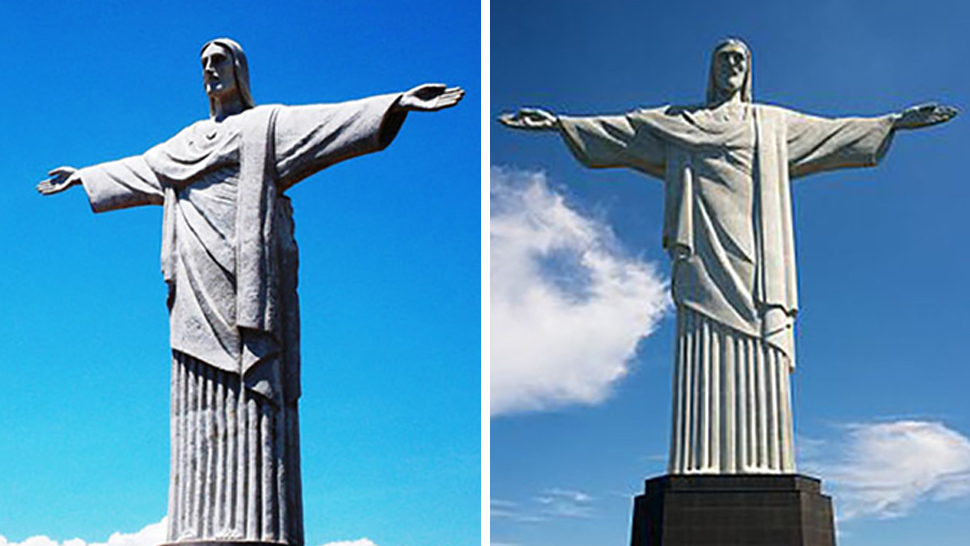 The Filipino obsession to replicate counterparts in the West was a form of colonial mentality that peaked post-War. From fashion to fads, locals copied the American way. Philippine showbiz spawned its own versions of Elvis, Liz Taylor, James Dean and Charlie Chaplin. Soon, landmarks from the Western world began making their appearance here—some intentionally copied, a few just accidental look-alikes.

More from EsquireMag.ph
10 Local Destinations That Will Transport You Around the World

The Sta. Rosa Arch in Laguna served as a watchtower for marauding pirates in the early days. Watchmen blew their horns either for signs of danger, during festivities or for mourning a deceased native. In 1925, municipal president Jose Zavalla hired David Dia to renovate the Arch which was said to be modeled after Paris’ Arc de Triomphe at the Champs-Élysées, built in 1806. The local Arch was built near the market area in 1931. Dia, a native of Santa Rosa, was a famous sculptor during his time. He also made Dr. Rizal’s monument in the town plaza. 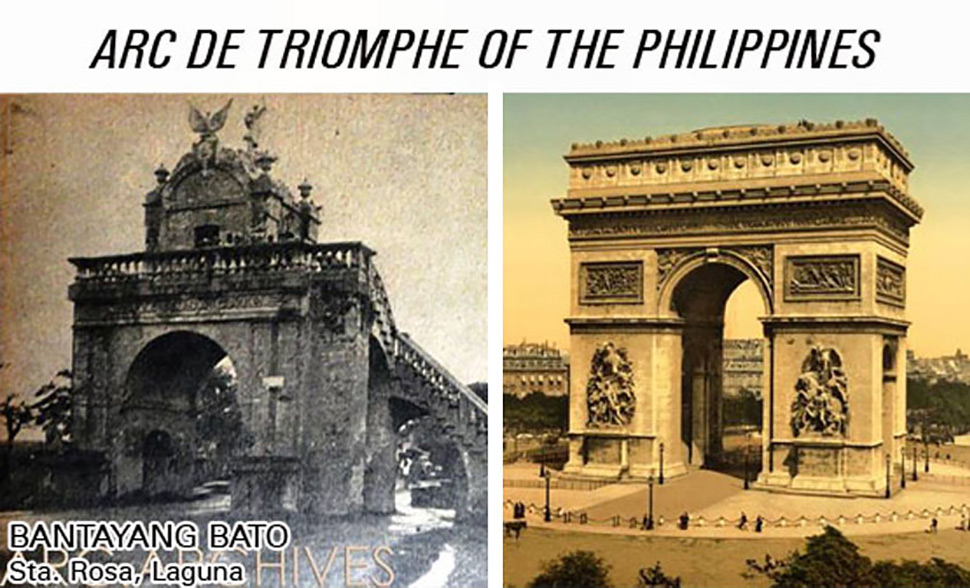 Pisa’s leaning belfry was started in August of 1173 and took 199 years to complete. The tower began to tilt while it was being constructed with a height that varied from 186 to 183 feet. It currently leans at an angle of 3.99 degrees. In the City of San Fernando, Pampanga, there exists a version of the Italian campanile—but the leaning structure is a NAWASA water tower that was constructed in 1929 at a cost of P10,000. Due to subsidence and its weak foundation, it tilted through the years. There was an attempt to prop it up in 1947, but the cost was prohibitive. Thankfully, it stopped tilting in 1955. It makes an angle of 87º with the horizontal (normal is 90º with the horizontal. 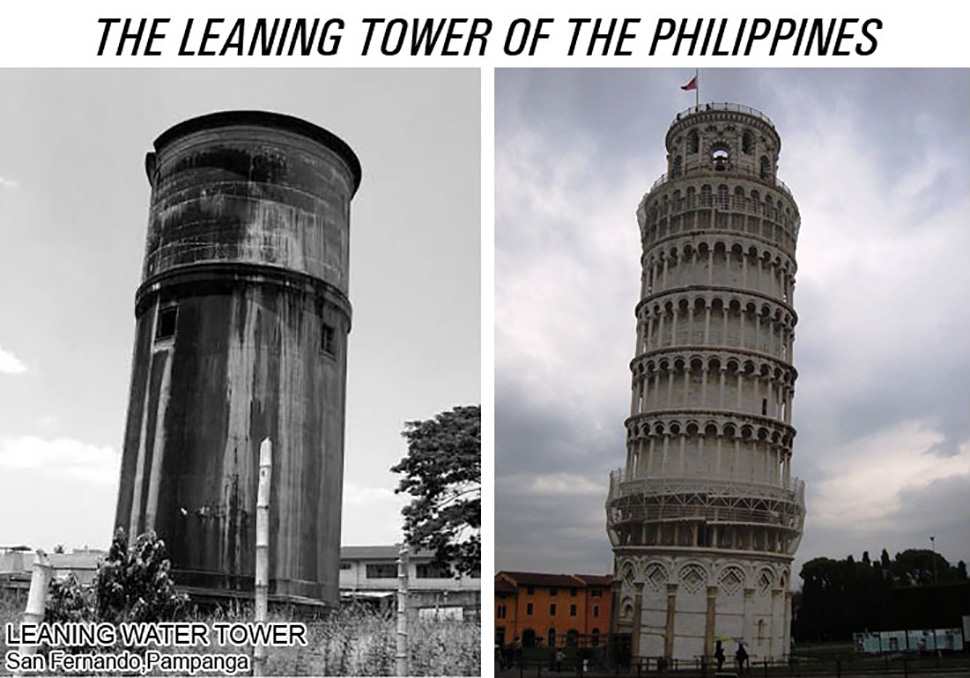 THE RUINS of Negros Occidental and the TAJ MAHAL GATE of Agra, India

The great gate to the Taj Mahal of India is of medieval architecture, with fine inlay work of white marble and precious stones on the red sandstone surface. It is eerily similar to the remnants of the mansion once owned by sugar baron Don Mariano Ledesma Lacson and Maria Braga Lacson in Talisay, Negros Occidental, now known as The Ruins. The grand residence was constructed in the early 1900s, inspired by medieval Italian architecture. It has been transformed by descendants into a tourist attraction. 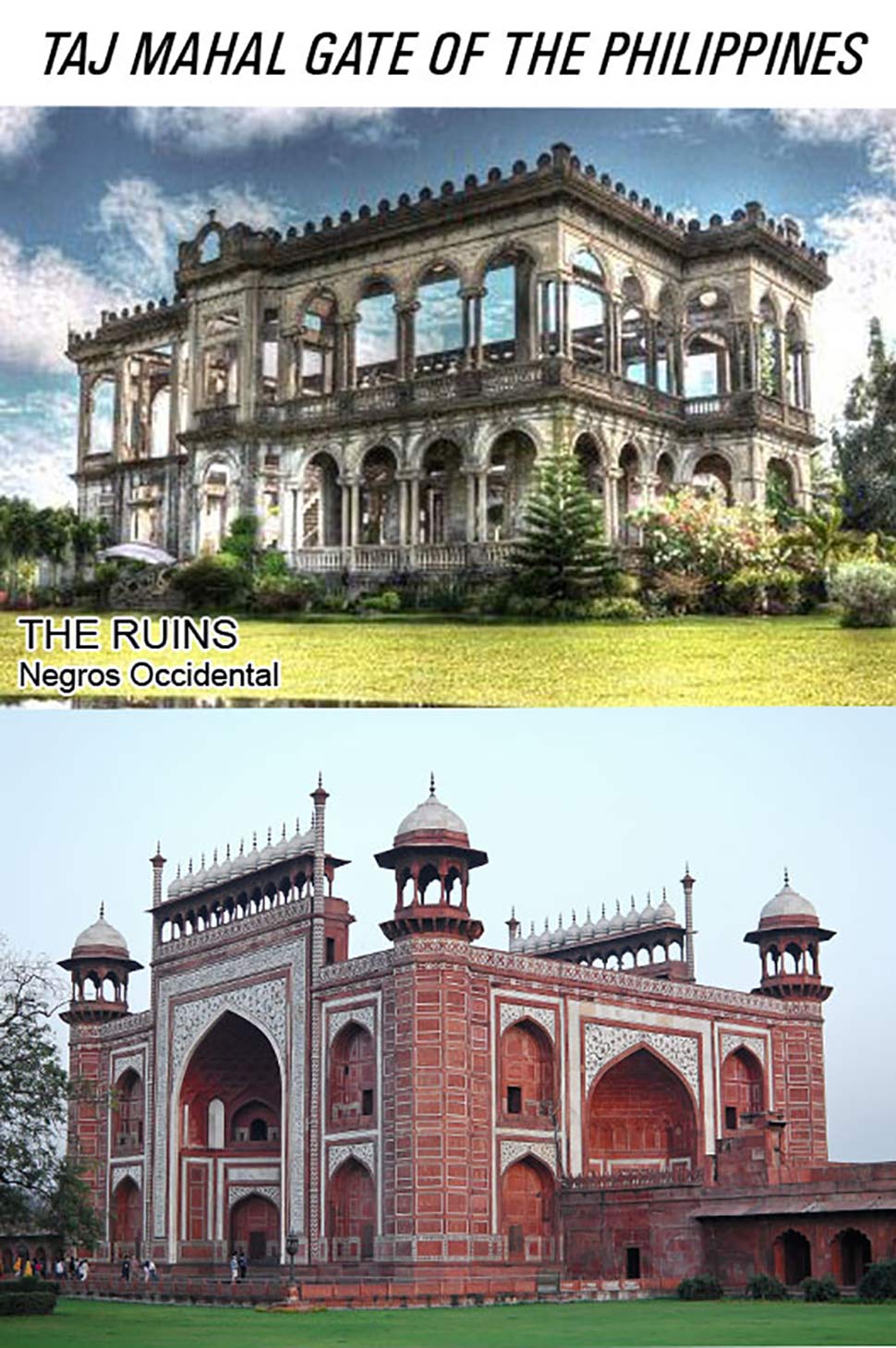 The Sistine Chapel, originally known as Cappella Magna, is found in the Apostolic Palace where the Pope resides, in the Vatican. It is famous for its ceilings which are profusely decorated with 15th and 16th century frescoes with many biblical scenes, as well as events from the life of Christ. Its Philippine counterpart can be found in the baroque church of Betis, rebuilt with concrete materials in 1770. The church underwent extensive renovation and beautification during the term of its last Spanish priest, Fray Santiago Blanco in 1939. The magnificent ceiling paintings are attributed to a series of artists including the legendary Simon Flores,  Isidoro C. Soto, a relative of literary great Juan Crisostomo Soto; Macario Ligon in the 1930s; and, in the early 1980s, Victor Ramos (1922–1986) who repainted and restored almost 80% of the ceiling artworks. The church has been declared a National Cultural Treasure by the Natioonal Museum and the National Comission for Culture and Arts in 2001. 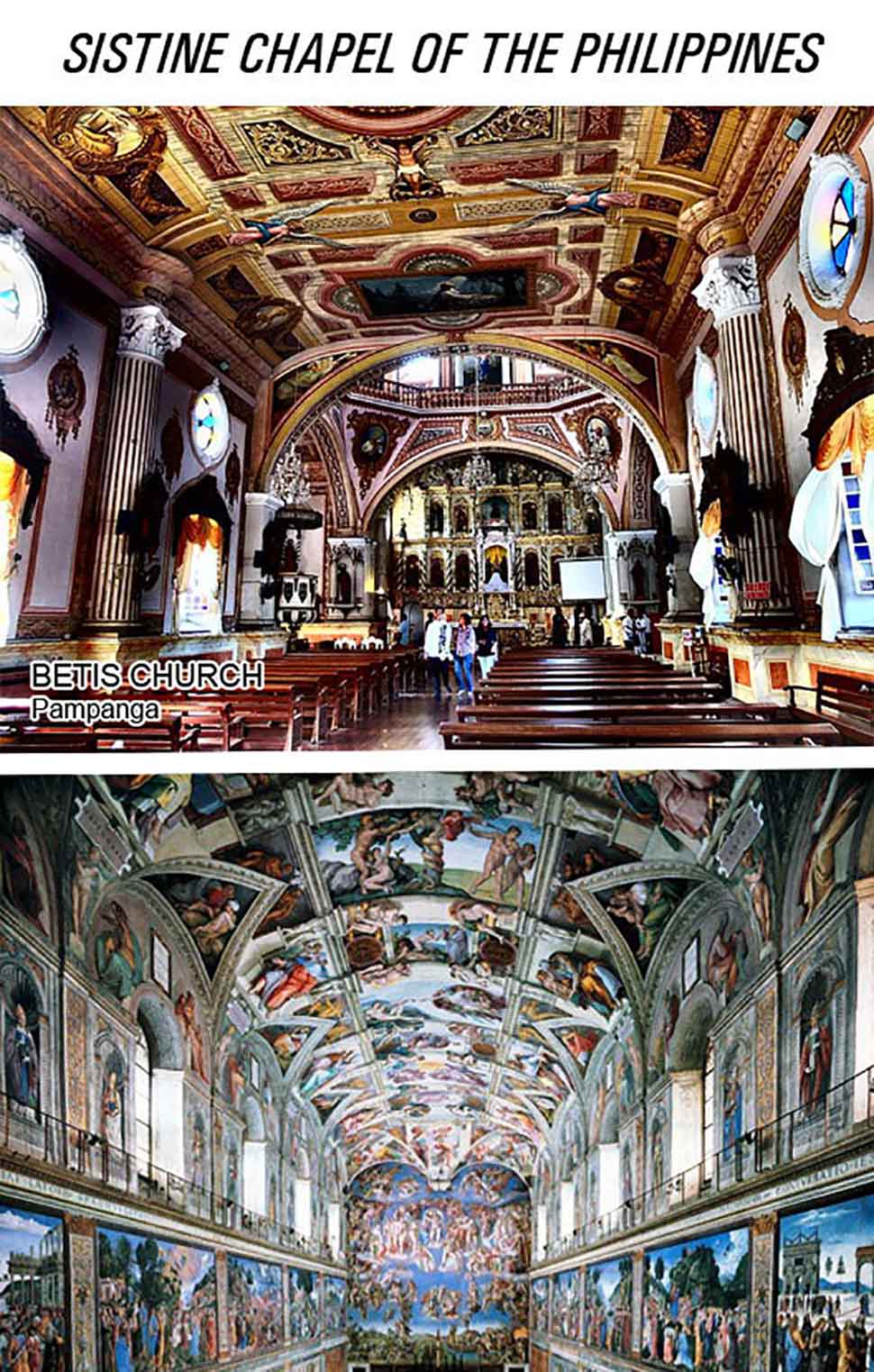 THE LINCOLN STATUE of Baguio City and the LINCOLN MEMORIAL of Washington D.C.

In Washington D.C., just across from the iconic Washington Monument stands a the Lincoln Memorial, built to honor President Abraham Lincoln. In the expansive central hall is seated statue of the great president, carved by the Piccirilli Brothers under the supervision of the sculptor, Daniel Chester French. The statue stands finally 19 feet (5.8 m) tall from head to foot, and took four years to finish, A more modest version can be found in Liberty Park, in Camp John Hay, Baguio City. Abe, just like his Washington counterpart, sits dignified on a chair, although he is made of cast cement with painted features that made him look sadly comical. There is also a Statue of Liberty replica in the same park. 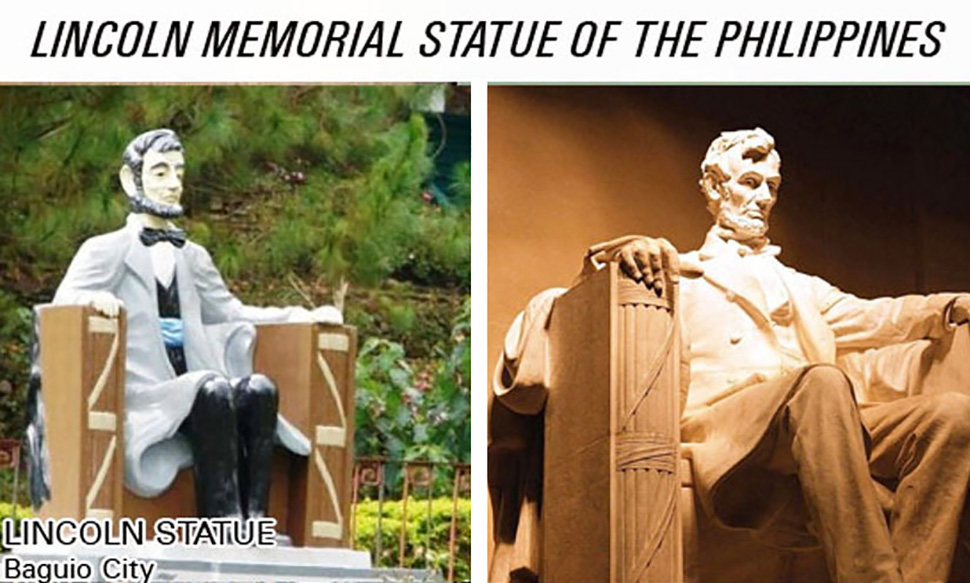 In 1858, starting on February 11, the Virgin appeared to 14 year old Bernadette Soubirous in the cave of Massabielle in Lourdes, France. Our Lady's apparition climaxed with the revelation that she was the Immaculate Conception. The rock cave has since become the focal point of the Our Lady of Lourdes shrine. The religious grotto in Lourdes has been replicated in Barangay Graceville in San Jose del Monte, Bulacan and features a small spring whose water, running beneath the Lourdes statue, and like the spring in France, is also said to be miraculous. 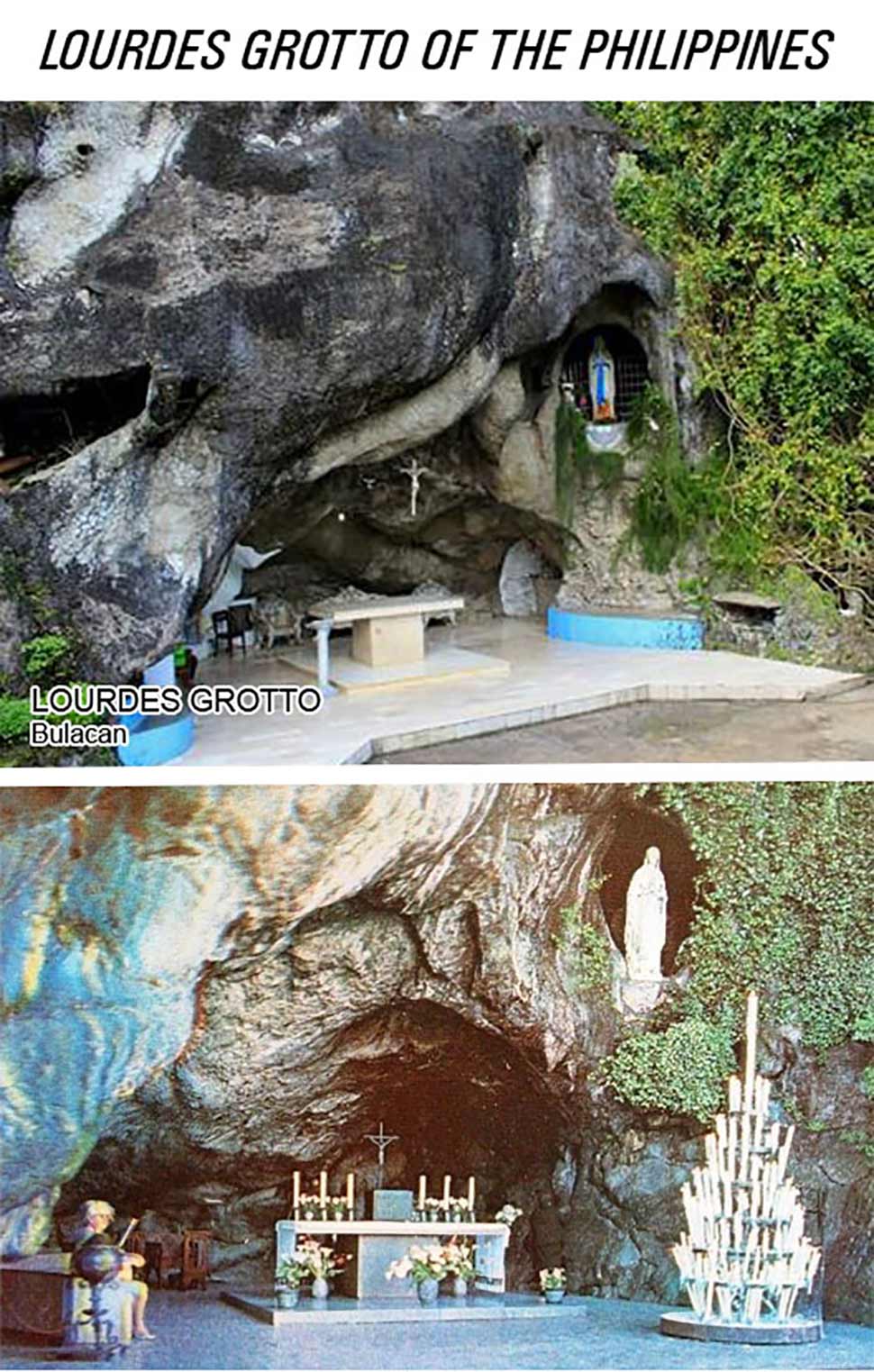 The symbol of Christianity worldwide, the 98 foot-high concrete statue of Cristo Redentor (Christ the Redeemer), with arms open wide, stands on the peak of the Corcovado Mountain, overlooking Rio de Janeiro, Brazil. French sculptor Paul Landowski created this art deco masterpiece, and it was executed by Brazilian engineer Heitor da Silva Costa. The massive image was built between 1922-1931. There are at least three copies of Cristo Redentor in the Philippines, but the most faithful is the one found in Barangay Balua, Cagayan de Oro. The 30 foot-tall statue, completed in May 2012,  stands on a 10 hectare piece of land owned by the Villar-owned Golden Haven memorial sanctuary. 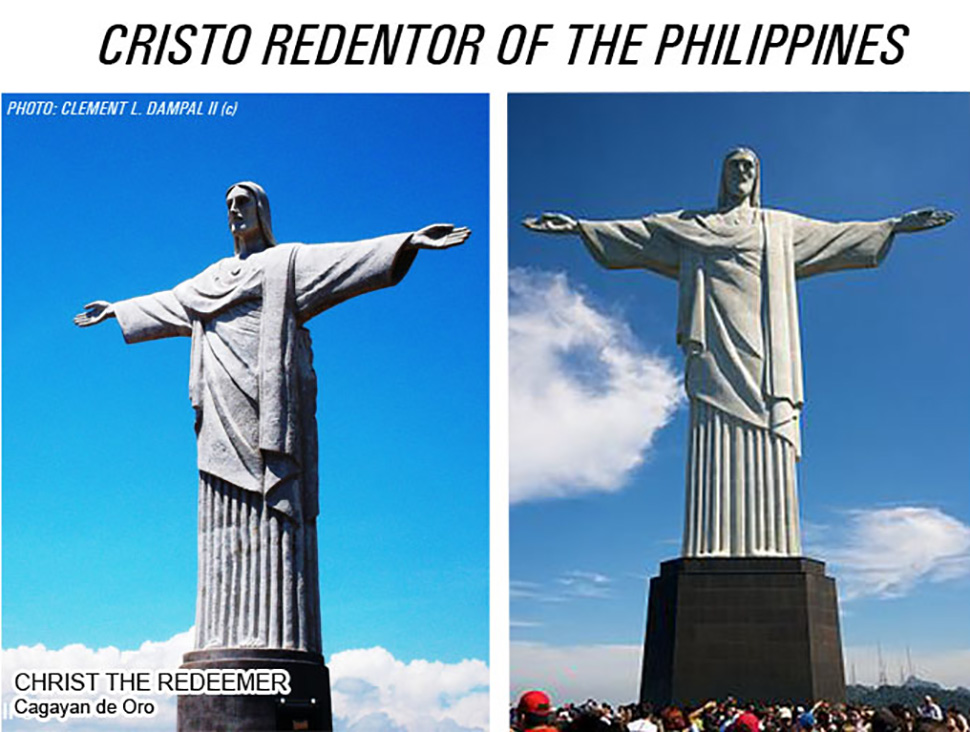 The most replicated symbol of American freedom is that of Lady Liberty, which stands enlightening the world on Staten Island in New York. A gift of France to the U.S., th 305 foot image was inaugurated in 1886. In Manila once stood an 8-foot copy of the Statue of Liberty in the Baluarte de san Diego, Intramuros. The Philippines was one of the recipients of the bronze statue, which was created on the occasion of the 40th anniversary of the Boy Scouts of America in 1950. It survived attacks from student activists in the 60s thru the 70s, until it was moved for safekeeping at the BSP head office in Ermita, Manila. 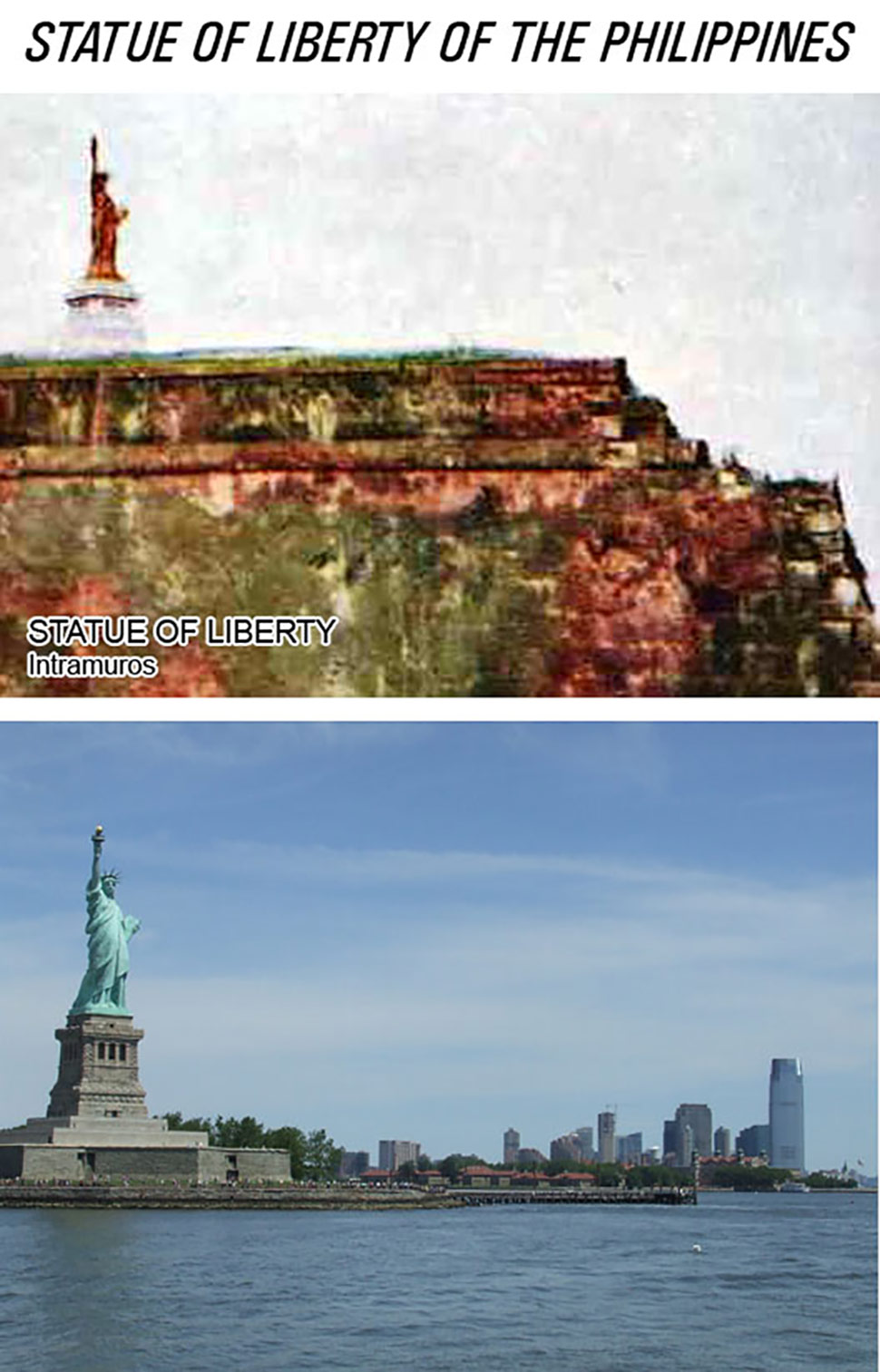 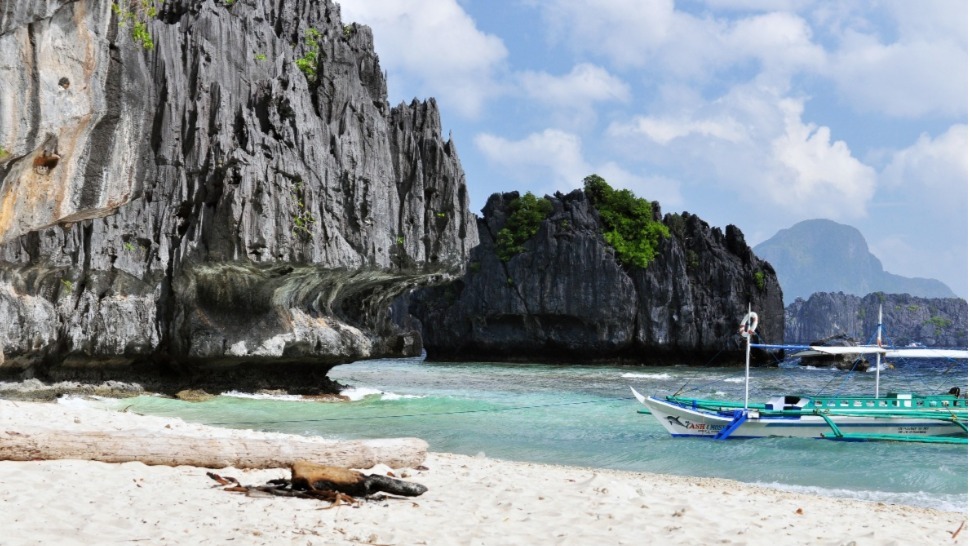