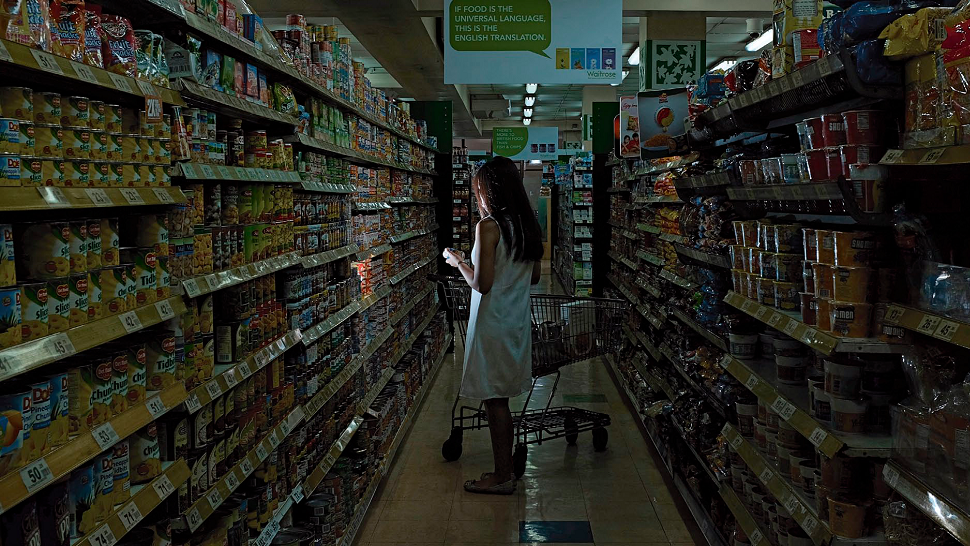 Ava—that's her in the white dress, wheeling her near-empty grocery cart through the canned goods aisle—and Jonathan—who, we shall presume, is at home tending to their three-month-old daughter—married roughly four years after they first met. They married because it was about time they married, but also because they loved each other. They loved each other very much. She was 24 then and could no longer fall asleep without holding his hand. He was 39, and had once drawn her face on the back of a receipt for a fire extinguisher. Ava, however, remembers this as Jonathan having drawn her face on the back of a forgettable paperback; both book and portrait, as she accepted so long ago that she no longer thinks about it at all, are lost to her.

On their first year of togetherness—which is, unfortunately, how Jonathan first phrased it over a bottle of cheap wine: “I would like for you to embark on togetherness with me,” and both of them had laughed, but Ava felt the deepest flush rise from her chest to stain the apples of her cheeks, and she had never thought to be ashamed for it—on their first year of togetherness, Ava ticked off a considerable number of milestones: She drank so much beer, the grass-veined curb before her parents’ house was a comfort; she broke her ankle coming down from a shelf ladder at her first job at the university library, and had to stay in the hospital overnight; she ran a marathon; she cooked so much adobo, trying to perfect that push-and-pull of salt and tartness, that her first apartment stank like rich brine for weeks; she lost her virginity, only to change her mind about the circumstances so that she could earnestly, almost-truthfully insist that she’d lost it for real this (second) time around; she realized she was lethally allergic to peanuts; she went skinny-dipping; her electricity got cut because she forgot to pay the bills; she got mugged; a man she thought far too beautiful for her (far too world-weary, far too two-engagements-under-his-belt-already, far too quiet during lovemaking, far too in love with her) was in love with her.

The next three years were rote. They appeased. On the fourth year, Ava and Jonathan married. And then they had Sanya, who was so small and pale and wide-eyed and rosy-lipped, Ava refused to meet her eyes on certain, long nights. Jonathan loved Sanya, too.

Sanya has been refusing the banana-colored paste they’ve been feeding her; everything ends up matted in her hair, and Ava can swear she once scraped Sanya’s dinner off her alarmingly tiny toes. Ava has thus been dispatched to get carrots. This morning, with Sanya’s breakfast dripping from Sanya’s father’s face, Sanya’s father told Ava: “Get carrots.” Jonathan likes carrots, eats them raw. He liked to eat whole, raw, unpeeled carrots while brushing shellac onto furniture; Jonathan vows the crisp, clean crunch keeps his mind off the smell. Ava pointed out that just because Jonathan liked carrots, it didn’t mean Sanya would as well. “It does not follow,” she said. But Jonathan ignored her, had carried Sanya off for a bath (the second in three hours!), and Ava decided her mutiny for the day would be to buy carrot-flavored goo and some other sweet fruit. She rather liked mangoes.

Ava and Jonathan will kiss a combined number of seven other people during the first ten years of their marriage. On the eighth year of their marriage, and with her having kissed the third man in the past two years, Ava will insist very, very quietly that it was love this time—the kind of love you could barely pack your bags for, so great was it that it paralyzed you; the kind of love that you let brim from you even as you washed the hair of the second child you have with the man whose last name you carried. Ava will carry that quiet, almost smug other-love inside her for months and months and months. I am someone’s bright, young thing. Ava will discover that she likes kissing with an open mouth; Ava will discover that she likes burrowing into an embrace and being momentarily drowned in a confusion—how could her shoulder fit better there, how did she become so small, how come all she smelled was soap, how would she know what name would automatically fall from her lips.

But. For Jonathan, she had read books upon books about monuments and palaces and tree houses and titanium-hugged museums and churches that look like cake, and about how limestone was formed and the undulation of sound across space and the bounce of light against the flattest planes. All those strange, unfamiliar names she had committed to memory! Le Corbusier, Hundertwasser, Buckminster, Gaudi, Loos, Hadid, Gehry, Wren, van der Rohe. Her acquired disdain for box-type malls and picture windows that faced east or west and unthinking violations to the fire code! For Jonathan: Sanya. And Oliver, the one who looked like her, the one who sang in the bathtub, the one who died.

When Jonathan is dead for fifteen years—a regrettable, all-too-literal scrape against a rusty nail—Ava will be tied to tubes that carry vein-searing medication into her body, and she will know the day and the night only by the degree of burning that seeps from the needles. So many needles, so very many—her thinning skin will bruise so brightly. Ava will have cancer, and everyone will know she will die soon. Sanya’s daughter will stay with her, as Sanya’s daughter is a homely girl and has taken this homeliness so much to heart that she can easily dispense with friends. Sanya’s homely daughter will ask her grandmother about the first man she ever loved, about the first man who ever thought her beautiful, and Ava will answer, two weeks before she dies, and all Ava will say is: “He built houses.”

Ava feels silly pushing the cart before her, when it carries nothing but a magazine she has already read—there is a recipe in it she wants to try, but forgot to write down. But it feels good, having something in her hands, something substantial, a considerable something that has been warmed and is now nearly slippy from her grasp. Ava wonders if she is lonely. She passes the greens of canned tomatoes, the blues of canned fruit swimming in a sweetness not of their own making. She longs to feel the chill from an open freezer. She moves past the cans of meat that aren’t truly meat, the cans boasting headless fish lounging on plates, moves until she sees them, those small jars, the smallest, she did not know they could make jars that small, so very small that two could fit snug in one hand spread open.

About The Author
Sasha Martinez
Sasha Martinez served as the head writer and social media director for the PCDSPO. She regularly reviews books for Esquire, and has also contributed fiction to the magazine. Her short stories have been honored by the Philippines Free Press and the Carlos Palanca Memorial Foundation, among other literary institutions.
View Other Articles From Sasha
Get The Latest Updates From Esquire!
Subscribe to our newsletter!
Comments
Esquire Money 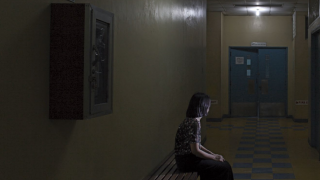 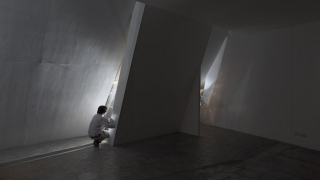 The Apotropaic School of Architecture
All Photos
Comments
View As List